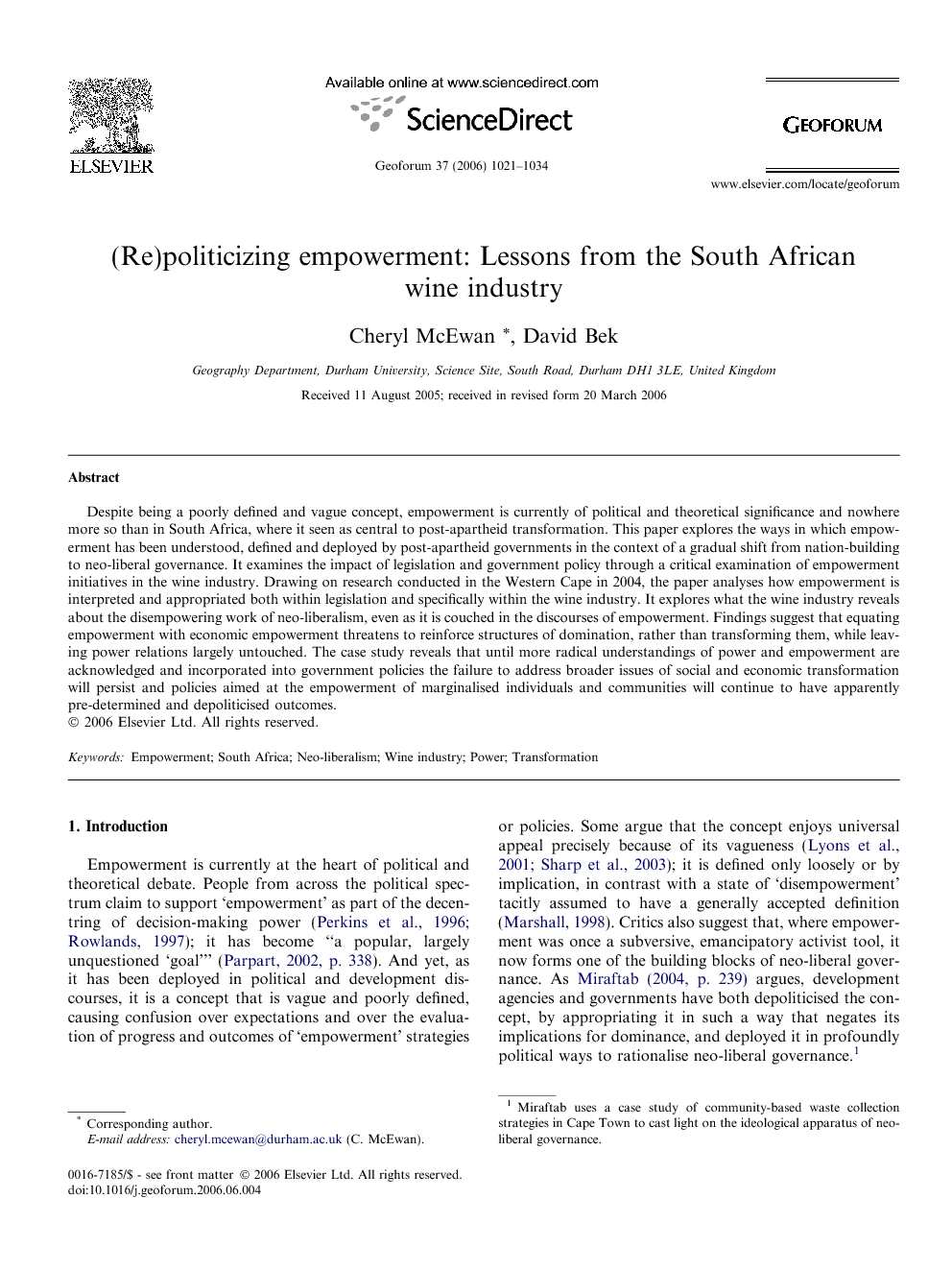 Despite being a poorly defined and vague concept, empowerment is currently of political and theoretical significance and nowhere more so than in South Africa, where it seen as central to post-apartheid transformation. This paper explores the ways in which empowerment has been understood, defined and deployed by post-apartheid governments in the context of a gradual shift from nation-building to neo-liberal governance. It examines the impact of legislation and government policy through a critical examination of empowerment initiatives in the wine industry. Drawing on research conducted in the Western Cape in 2004, the paper analyses how empowerment is interpreted and appropriated both within legislation and specifically within the wine industry. It explores what the wine industry reveals about the disempowering work of neo-liberalism, even as it is couched in the discourses of empowerment. Findings suggest that equating empowerment with economic empowerment threatens to reinforce structures of domination, rather than transforming them, while leaving power relations largely untouched. The case study reveals that until more radical understandings of power and empowerment are acknowledged and incorporated into government policies the failure to address broader issues of social and economic transformation will persist and policies aimed at the empowerment of marginalised individuals and communities will continue to have apparently pre-determined and depoliticised outcomes.

Empowerment is currently at the heart of political and theoretical debate. People from across the political spectrum claim to support ‘empowerment’ as part of the decentring of decision-making power (Perkins et al., 1996 and Rowlands, 1997); it has become “a popular, largely unquestioned ‘goal”’ (Parpart, 2002, p. 338). And yet, as it has been deployed in political and development discourses, it is a concept that is vague and poorly defined, causing confusion over expectations and over the evaluation of progress and outcomes of ‘empowerment’ strategies or policies. Some argue that the concept enjoys universal appeal precisely because of its vagueness (Lyons et al., 2001 and Sharp et al., 2003); it is defined only loosely or by implication, in contrast with a state of ‘disempowerment’ tacitly assumed to have a generally accepted definition (Marshall, 1998). Critics also suggest that, where empowerment was once a subversive, emancipatory activist tool, it now forms one of the building blocks of neo-liberal governance. As Miraftab (2004, p. 239) argues, development agencies and governments have both depoliticised the concept, by appropriating it in such a way that negates its implications for dominance, and deployed it in profoundly political ways to rationalise neo-liberal governance.1 Empowerment strategies have arguably been nowhere more central to government policy than in South Africa, both historically and in the present,2 and nowhere are they currently more hotly debated and contested. Empowerment is seen as central to post-apartheid nation-building and to the broader transformation from a racialised system of discrimination to one of greater political, social and economic equity. Quite what empowerment means, how it is to be fostered and how much it is achieved are, however, both complex and contested. We wish to argue that the ways in which empowerment has been understood, defined and deployed by post-apartheid governments, and specifically the ways in which it has seemingly been reduced to economic empowerment, are in danger of reinforcing structures of domination, rather than transforming them, while leaving power relations largely untouched. The paper first explores conceptual arguments about power and empowerment as they have unfolded in South African debates, legislation and policies. It focuses on the gradual shift from nation-building to neo-liberal governance and how this is reflected in economic reductionism evident in concepts of empowerment. We argue that such a reductionism both depoliticises empowerment and potentially has disempowering effects. In order to develop this argument, we explore the impact of legislation and government policy through a critical examination of empowerment initiatives in the wine industry. Agribusiness was known to be particularly exploitative of black labour under apartheid and, because of its connections to issues of land restitution and workers rights, is of immediate significance in socio-economic transformation and issues of empowerment.3 Moreover, a number of schemes have been implemented to transform the wine industry, with several South African wines now being marketed explicitly at home and internationally as ‘empowerment’ wines (Bek et al., 2006). South African case studies of the wine industry and other agricultural sectors in the Western Cape have played an important role in contributing to broader debates around fair and ethical trade. In this paper we take a different approach in examining what the wine industry reveals of current debates about empowerment and its appropriation by governments. We are interested in what empowerment means in this context, what the wine industry reveals about the disempowering work of neo-liberalism, even as it is couched in the discourses of empowerment, but also what lessons might be learned about potential ways forward in re-politicising empowerment. Our assessments are based on research conducted in the Western Cape in March/April 2004. A wide range of informants involved in the wine industry were interviewed, including producers, managers, government officials, consultants, representatives of labour unions, employment and marketing associations and empowerment-focused wine industry bodies.4 We explore the contested meanings and impacts of empowerment strategies, focusing on both industry-wide and grassroots initiatives. South African policies are subject to intense debates and criticism, particularly for their apparent failure to deliver broad-based emancipatory empowerment. To this end we explore some of the complexities and contradictions of trying to effect broad-based empowerment within the context of unprotected free market globalisation and the implications for conceptualising empowerment within this context.

The complexities and contestations over meanings and strategies of empowerment are clearly of enormous significance in post-apartheid South Africa. This paper has highlighted the political, moral and economic imperatives underpinning drives towards empowering a previously oppressed majority. Since 1994, empowerment has been perceived as fundamental to nation-building and to socio-economic transformation aimed at overcoming racialised poverty and polarisation. The ANC government, however, has more recently utilised a narrower understanding of empowerment in legislation and policy, enacting policies to bring about ‘power over’ and ‘power to’ specifically through BEE. What appears to be missing, however, are policies and practices that foster ‘power from within’ through capacity-building, education and enabling participation within communities. Debates around BEE are essentially about the nature of power and the extent and influence of economic participation. The profound constraints on these empowerment strategies reveal much about the contested nature of power relations and the distribution of power in South Africa, which is arguably largely untouched but for the emergence of a small, black middle class. The wine industry exemplifies how corporate South Africa has responded with a selective interpretation of social and economic transformation, as demanded by BEE prior to 2004, and consequently there are still high levels of social inequality and a legacy of inadequate stakeholder engagement (Heese, 2003). It is unclear how radical empowerment will be effected following the 2004 Act. Despite fierce criticism, some suggest that it has the potential to foster a less patrimonial, less racially and ethnically divisive BEE strategy and to create a ‘growth coalition’ capable of sustainable development and empowerment of the black majority (Iheduru, 2004). However, it is unclear how the Act will alter cultures of governance that have so far failed to deliver social and economic justice and empowerment or the required public institutional transformation. It is unclear how it will help tackle civil society disengagement and the disempowerment of women, the poor and rural households that has occurred since 1994 (Khosa, 2002). It is unclear how it will overcome the less tangible elements of socio-cultural organisation that constrain the lives of marginalised people, especially impoverished men, women and young people, denying them a sense of effective agency that is central to empowerment (Sharp et al., 2003). One positive outcome, however, is that the state appears not beholden to any particular interest and has recognised recently that the legitimating role assigned to emergent black middle classes threatened to turn BEE strategy into nepotistic accumulation, which also threatened to re-racialise the country, widening black inequality gaps and precluding broad-based empowerment. As Iheduru (2004, p. 25) argues, while the state remains “quasi-pluralistic”, where no social group holds power, the potential exists for other powerful groups (including organised labour and women activists) to push for an enactment of empowerment policies stripped of the patrimonial and paternalistic accumulation strategies that have thus far characterised them. The depth and urgency of debates about black empowerment in South Africa is arguably unique and positive achievements should not be forgotten amidst considerable criticism. Its legislative framework is seen by supporters of labour as highly progressive and advanced in international terms. However, transformation is slow and empowerment is clearly constrained by neo-liberal macro-economics, interpreted in different ways by different stakeholders and often cynically manipulated by those already invested with power. Empowerment initiatives may not be delivering radical outcomes as yet, but they are part of a process of setting a tone throughout South African society and perhaps beyond, reinforcing the imperative of transformation and identifying some of the challenges that are situated within local, national and global power structures. It is imperative, however, that policies are adopted to bring about meaningful empowerment, where empowerment means giving greater political and economic autonomy to black people, reducing inequality and challenging their subordinate position in many spheres of life (Kritzinger and Vorster, 1998). It is also imperative that power is identified less in terms of domination over others and more in terms of the capacity of previously oppressed peoples to increase their own self-reliance, the right to determine choices in life and to gain control over crucial resources.