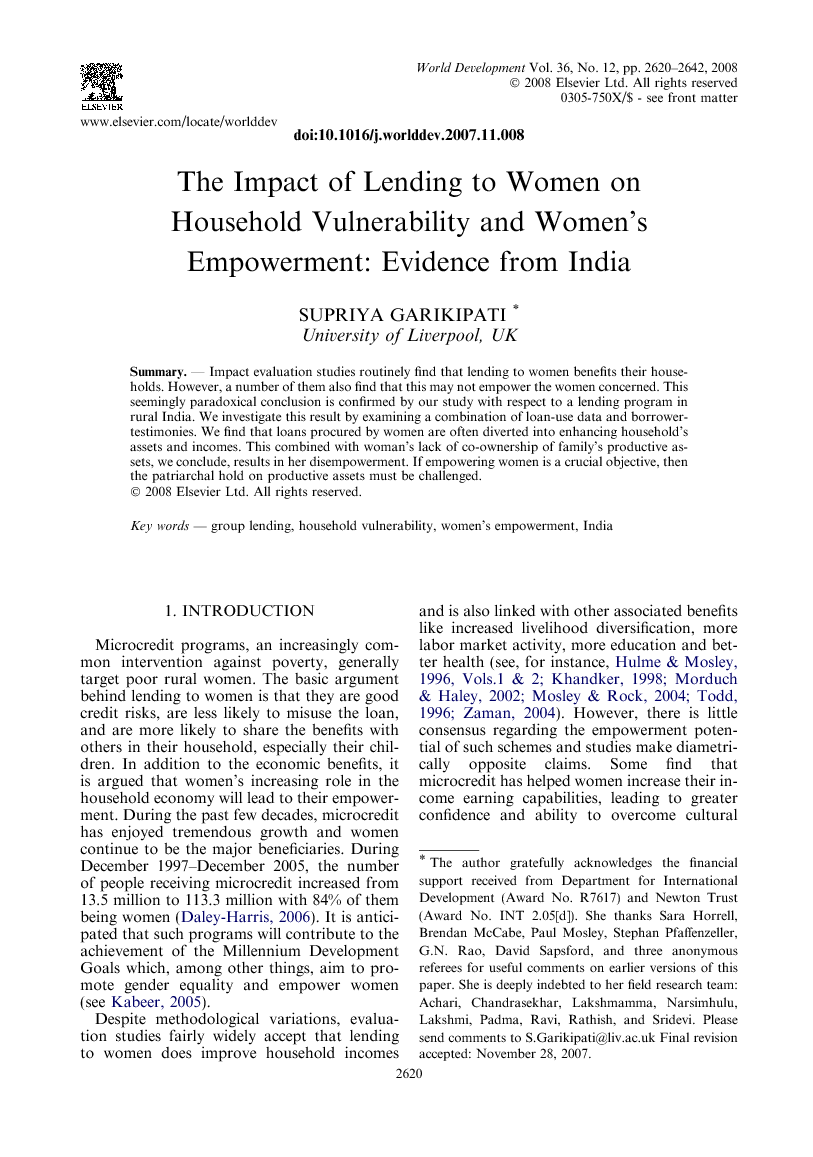 Impact evaluation studies routinely find that lending to women benefits their households. However, a number of them also find that this may not empower the women concerned. This seemingly paradoxical conclusion is confirmed by our study with respect to a lending program in rural India. We investigate this result by examining a combination of loan-use data and borrower-testimonies. We find that loans procured by women are often diverted into enhancing household’s assets and incomes. This combined with woman’s lack of co-ownership of family’s productive assets, we conclude, results in her disempowerment. If empowering women is a crucial objective, then the patriarchal hold on productive assets must be challenged.

Microcredit programs, an increasingly common intervention against poverty, generally target poor rural women. The basic argument behind lending to women is that they are good credit risks, are less likely to misuse the loan, and are more likely to share the benefits with others in their household, especially their children. In addition to the economic benefits, it is argued that women’s increasing role in the household economy will lead to their empowerment. During the past few decades, microcredit has enjoyed tremendous growth and women continue to be the major beneficiaries. During December 1997–December 2005, the number of people receiving microcredit increased from 13.5 million to 113.3 million with 84% of them being women (Daley-Harris, 2006). It is anticipated that such programs will contribute to the achievement of the Millennium Development Goals which, among other things, aim to promote gender equality and empower women (see Kabeer, 2005). Despite methodological variations, evaluation studies fairly widely accept that lending to women does improve household incomes and is also linked with other associated benefits like increased livelihood diversification, more labor market activity, more education and better health (see, for instance, Hulme and Mosley, 1996, Khandker, 1998, Morduch and Haley, 2002, Mosley and Rock, 2004, Todd, 1996 and Zaman, 2004). However, there is little consensus regarding the empowerment potential of such schemes and studies make diametrically opposite claims. Some find that microcredit has helped women increase their income earning capabilities, leading to greater confidence and ability to overcome cultural asymmetries (see, for instance, Hashemi et al., 1996, Kabeer, 2001, Pitt and Khandker, 1998, Pitt et al., 2006 and Rahman, 1986). Others find that loans made to women are usually controlled by their husbands, leading to women’s dependence on them for loan installments and at times in domestic dissension and violence (see, for instance, Goetz and Gupta, 1996, Leach and Sitaram, 2002 and Rahman, 1999). Ignoring the conceptual and methodological differences among these studies, the suggestion here is that although lending to women benefits their households, its beneficial impact on women themselves is somewhat uncertain.1 By focusing on a case study, this paper seeks to unravel some of the reasons behind this paradoxical conclusion. In this study, we separately examine the impact of microcredit on beneficiary households and on the women concerned. We use data from two villages in Andhra Pradesh (AP), India, that participate in the Self Help Group (SHG) program which lends mainly to rural women. We find the same paradoxical results that haunt the microcredit literature: that while lending to women has helped households across income groups to diversify livelihoods and reduce their vulnerability to shocks, it has failed to empower the women concerned. We refer to this result as the “impact-paradox” and investigate the reasons behind it by examining a combination of loan-related data from a sample survey and borrower-testimonies. Our findings suggest that woman’s loan may easily get diverted into enhancing household assets and incomes but given her lack of co-ownership of family’s productive assets, access to credit may not result in her empowerment. In such a situation, the household may benefit, but the woman herself is likely to see further deepening of the resource division between her and her husband. The remainder of this paper is organized as follows. Section 2 briefly discusses India’s rural financial system and Section 3 discusses its microcredit program. Section 4 describes the questionnaires used in our fieldworks and the resulting data sets used in the empirical parts of this paper. The empirical analysis is carried out in two parts: in the first part we analyze the impact of microcredit on household vulnerability and female empowerment and in the second part, we examine loan-use and repayment data to understand the paradoxical results obtained. Section 5 presents the empirical models used to examine the impact of microcredit on beneficiary households and the women concerned. It also provides the descriptive statistics of the variables and discusses the outcomes of the first part of the empirical analysis. Similarly, Section 6 presents the models used to investigate the “impact-paradox.” In addition to providing the descriptive statistics of the sample and the results of the second part of the empirical work, it also summarizes the testimonial evidence collected from the loanee women. Section 7 concludes.

This paper sets out to investigate the paradoxical suggestion that emerges from studies evaluating the impact of microcredit viz., while lending to women benefits their households, its benefits for women themselves are not as certain. Using detailed data sets from two villages participating in the SHG program in India, it examines the impact of the credit program on core dimensions of household vulnerability and female empowerment. The same paradoxical result that taunts the microcredit literature surfaces: we find that lending to women is likely to strengthen the household’s ability to cope with vulnerability across income groups but that the women themselves, especially the poorest ones, are not likely to see consistent improvements in their household status. Further, we investigate the mechanisms underlying this “impact-paradox” by examining loan-use and repayment data and testimonies by women borrowers. Our findings suggest that loans given to women are mainly diverted into productive or consumption needs of their households. While this in general helps the households strengthen their ability to cope with crises, it may have adverse consequences for the women concerned. Women’s lack of ownership of family’s productive assets means that even when her loans are used for productive purposes they are unable to divert any of the incomes from loan-sponsored activities into repayments. Compelled to rely on their own devices, women are forced to accept unfavorable use of their work time and may also find their control over family resources diminish. The findings of this study also suggest that if women’s lack of control over family assets is not challenged, then microcredit may fail to live up to its promise vis-à-vis empowerment. The findings of this paper have a number of policy implications. First, our results indicate that lending to women undeniably benefits their households diversify incomes and improves their ability to cope with shocks. Hence, microcredit can be a powerful vehicle for enhancing incomes and protecting households from the risk of crises. Second, our results suggest that microcredit alone may not be the right intervention for new clients. A social security program like the IGVGD intervention offered by BRAC or an insurance backed credit scheme may be a more beneficial in such cases. Such financial services can also provide vital cushioning in time of economic shock due to natural disasters or ill-health. Third, our findings also show that the benefit to women is greatest where loans are used for self-managed enterprises and especially so if individual loans are pooled into group projects. This suggests that credit must be accompanied by programs aimed at building the group’s economic capabilities. It is likely that the lack of focus on “group building” activities within the SHG scheme is one of the main reasons for its ineffectiveness in empowering women. Credit alone is unlikely to lead to women’s emancipation in terms of affecting her household position and allocation of her work time (also see EDA, 2005 and Hunt and Kasynathan, 2001). Our findings support the often made suggestion that women’s empowerment may be increased when credit is offered as part of an integrated package that includes other services like non-productive loan facilities, insurance, enterprise development, and welfare-related activities (Berger, 1989, Holvoet, 2005, Johnson and Rogaly, 1996 and Mayoux, 2005). Finally and most importantly, our findings suggest that where household’s demand for credit for productive purposes is high, lending to women may not benefit her personally. For this to happen, the patriarchal hold on family’s productive assets needs to be challenged. One of the ways in which this could be achieved is to make credit conditional on asset transfers in favor of the women concerned. Effective transfer is likely to be achieved where assets are acquired using woman’s own loan money.