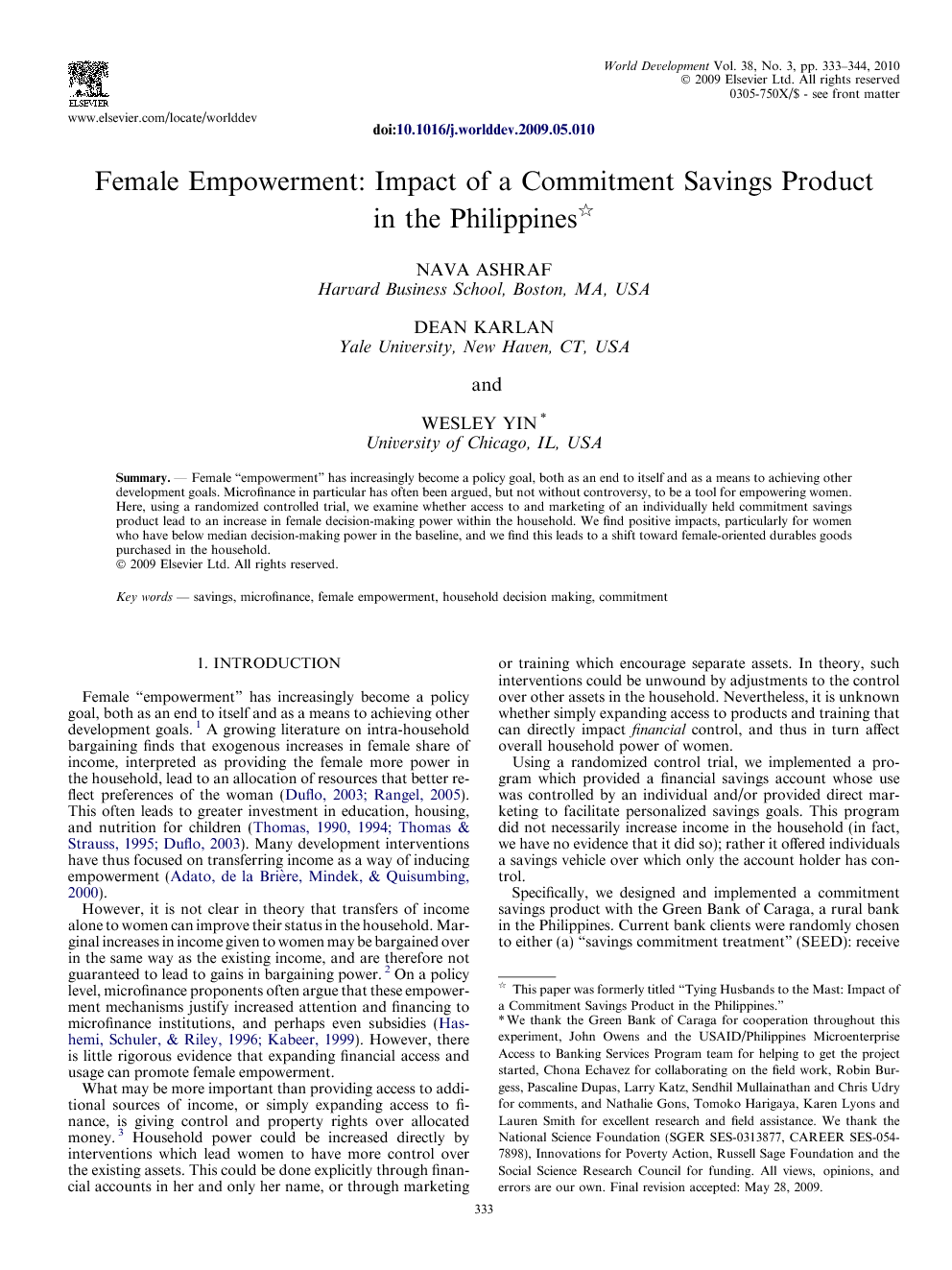 Female “empowerment” has increasingly become a policy goal, both as an end to itself and as a means to achieving other development goals. Microfinance in particular has often been argued, but not without controversy, to be a tool for empowering women. Here, using a randomized controlled trial, we examine whether access to and marketing of an individually held commitment savings product lead to an increase in female decision-making power within the household. We find positive impacts, particularly for women who have below median decision-making power in the baseline, and we find this leads to a shift toward female-oriented durables goods purchased in the household.

Female “empowerment” has increasingly become a policy goal, both as an end to itself and as a means to achieving other development goals.1 A growing literature on intra-household bargaining finds that exogenous increases in female share of income, interpreted as providing the female more power in the household, lead to an allocation of resources that better reflect preferences of the woman (Duflo, 2003 and Rangel, 2005). This often leads to greater investment in education, housing, and nutrition for children (Thomas, 1990, Thomas, 1994, Thomas and Strauss, 1995 and Duflo, 2003). Many development interventions have thus focused on transferring income as a way of inducing empowerment (Adato, de la Brière, Mindek, & Quisumbing, 2000). However, it is not clear in theory that transfers of income alone to women can improve their status in the household. Marginal increases in income given to women may be bargained over in the same way as the existing income, and are therefore not guaranteed to lead to gains in bargaining power.2 On a policy level, microfinance proponents often argue that these empowerment mechanisms justify increased attention and financing to microfinance institutions, and perhaps even subsidies (Hashemi et al., 1996 and Kabeer, 1999). However, there is little rigorous evidence that expanding financial access and usage can promote female empowerment. What may be more important than providing access to additional sources of income, or simply expanding access to finance, is giving control and property rights over allocated money.3 Household power could be increased directly by interventions which lead women to have more control over the existing assets. This could be done explicitly through financial accounts in her and only her name, or through marketing or training which encourage separate assets. In theory, such interventions could be unwound by adjustments to the control over other assets in the household. Nevertheless, it is unknown whether simply expanding access to products and training that can directly impact financial control, and thus in turn affect overall household power of women. Using a randomized control trial, we implemented a program which provided a financial savings account whose use was controlled by an individual and/or provided direct marketing to facilitate personalized savings goals. This program did not necessarily increase income in the household (in fact, we have no evidence that it did so); rather it offered individuals a savings vehicle over which only the account holder has control. Specifically, we designed and implemented a commitment savings product with the Green Bank of Caraga, a rural bank in the Philippines. Current bank clients were randomly chosen to either (a) “savings commitment treatment” (SEED): receive an offer to open a “commitment” account accessible only by them, and which does not mature until a pre-specified goal is reached,4 (b) “marketing treatment”: receive one-on-one marketing about the importance of saving for a goal, or (c) control: no household visit. The savings commitment device could benefit those with self-control, but could also benefit those with familial or spousal control issues. Indeed, the literature on household savings, and on informal savings devices in particular, has emphasized motivations for both reasons (Anderson and Baland, 2002 and Gugerty, 2007). Those who choose to open such accounts are likely fundamentally (and un-observably) different from those who do not open such accounts, and thus a comparison of account-holders to non-account-holders would be plagued by a selection bias. By using a randomized control trial, and comparing those who were offered the account to those who were not, we are able to draw causal inference about the impact of the account itself (i.e., and not a self-selection bias in which impact estimates are confounded by account openers being motivated to save) on household dynamics. We reported earlier (Ashraf, Karlan, & Yin, 2006) that after one year individuals who were offered the product increased their savings by 81% relative to a control group, and that in accordance with the theoretical literature on hyperbolic preferences (Laibson, 1997 and O’Donoghue and Rabin, 1999) and dual-self models (Fudenberg, 2005, Gul and Pesendorfer, 2001 and Gul and Pesendorfer, 2004), time-inconsistent individuals were the ones most likely to demonstrate a preference for this commitment. Using two new sources of data, a follow-up survey collected after one year and administrative bank data collected after two and a half years, we examine here the impact of this commitment savings product on both self-reported decision-making processes within the household and the subsequent household allocation of resources. We find positive impacts, particularly for women who have below median decision-making power in the baseline, and we find this leads to a shift toward female-oriented durables goods purchased in the household. This paper proceeds as follows. Section 2 describes the commitment savings product and the experimental design. Section 3 presents the empirical results on household decision making and self-perception of savings behavior. Section 4 concludes with a discussion of the theoretical mechanisms through which this impact may have occurred.

Even when husbands appropriate their wives’ loans, microcredit is thought to empower women in household decision-making processes (Mizan, 1993). Policymakers frequently cite these arguments as a key motivation for targeting microfinance and microsavings interventions to women. On the other side, some have argued that microfinance usage and the subsequent need to repay (e.g., in order to protect her reputation amongst her peers) may subjugate women to the power of their spouses, hence potentially increasing domestic violence (Rahman, 1999). Evidence (albeit weak) points both ways, and naturally may depend largely on the region-specific economic and social setting.19 The effects of microcredit and, more generally, microfinance, which includes savings and/or insurance products, on female empowerment remain unclear, in large part because studies of it tend to suffer from a pronounced selection bias in the type of women who access microcredit (Pitt et al., 2006). Using a randomized controlled trial, we evaluate the impact of a commitment micro-savings account. We find that the commitment product positively impacts both household decision-making power for women (i.e., the household is more likely to buy female-oriented durables), self-perception of savings behavior (time-inconsistent females report being more disciplined savers), as well as actual consumption decisions regarding durables goods. The offering of the commitment savings product could change household dynamics through several mechanisms. First, the commitment product could have affected bargaining power through the various forms of control (both legal and normative/psychological) over decisions to withdraw and to roll-over balances. A second person may still apply pressure to influence withdrawal decisions, or exert pressure on other margins in response to the account, and unwind the control gained by the account. Nonetheless, in restricting legal control to one individual, the product creates a formal barrier to second persons that the account holder can use in bargaining.20 Second, a commitment savings account could establish a norm within the household that the funds are to be used for certain purposes. Any norms created by the commitment savings account might not be unwound by ex-post reallocation of resources. Duflo and Udry (2003) find that crop revenues in Cote d’Ivoire are labeled as either male, female, or family, and shocks to one “mental account” remain in that account and are not reallocated fully ex-post. The mere labeling of this account as the wife’s provided her with additional power to allocate those funds, which did not in turn crowd-out the allocation of other funds. Third, it may also be the case that the woman actually got more control of liquid funds. Many who took up the savings product made use of a lock-box. These individuals were thus able to keep small amounts aside, giving the person the power to make decisions about the accumulated savings. Particularly given the small amount of individual deposits, it is possible that accumulations in this account were generated without other household members being aware of the amount being saved (although note that the treatment effect on savings volume was not stronger for women than it was for men). Fourth, the commitment savings treatment (or the marketing treatment, which had a positive but insignificant statistically impact on savings (Ashraf et al., 2006)), could have encouraged savings in general. The increased savings by woman could signal her outside option in case of a breakdown of marriage. Female savings in this setting functions as the female wage rate in previous cooperative bargaining models (Pollak, 2005). Although plausible in theory, note that the savings amounts here were small enough such that this theory is likely only true for marriages on the margin of breakdown. Greater savings or the opening of a non-joint savings account raises the threat point in bargaining, representing what could be earned in a non-cooperative outcome. Finally, even in the absence of an actual increase in savings, the simple act of having a bank staff member come to one’s door and encourage one to set savings goals could in itself have increased a sense of “locus of control.” The presence of the bank staff member may offer an external social reinforcement of the account holder’s preferences for how deposits are to be spent. This is akin to the second mechanism detailed above, but works through the marketing process, not the design features of the savings product itself. Our results suggest that both the marketing process and control over the asset through the product design seem important—although the product design effect is somewhat larger, we do not have the sample size to distinguish well between the two treatments. We do find, however, that the package of increased control over assets and direct encouragement via marketing to take control of goal-setting and savings caused a significant increase in empowerment for women, compared to a control group that did not receive any special asset or marketing. Through continued experimentation, we can learn more about the factors that drive savings decisions in the household and thus also how to best design savings products that help individuals reach goals such as asset building and consumption smoothing. We also need continued measurement of how products impact household decision making, and how household decision-making affects the efficacy of different savings products. The results here suggest that commitment features, in particular loss of liquidity combined with sole control of the account, appeal to those with self-control and have positive impacts on female decision-making power. These are not contradictory findings, but rather point out that a simple design feature such as a restriction on withdrawals or encouraging savings through marketing or door-to-door deposits, can benefit both those in search of self control devices as well as those who desire to have more decision-making power in the household.