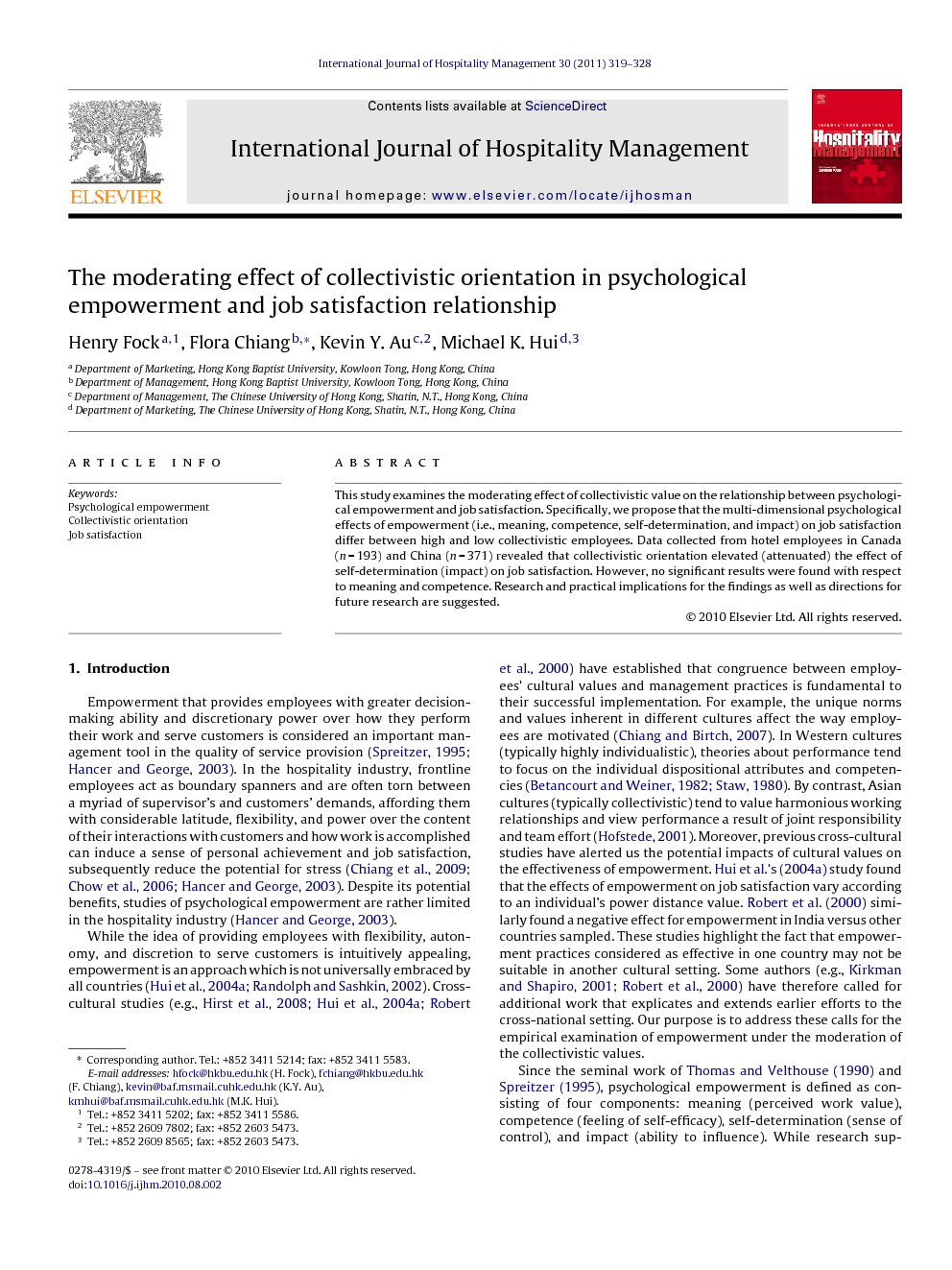 This study examines the moderating effect of collectivistic value on the relationship between psychological empowerment and job satisfaction. Specifically, we propose that the multi-dimensional psychological effects of empowerment (i.e., meaning, competence, self-determination, and impact) on job satisfaction differ between high and low collectivistic employees. Data collected from hotel employees in Canada (n = 193) and China (n = 371) revealed that collectivistic orientation elevated (attenuated) the effect of self-determination (impact) on job satisfaction. However, no significant results were found with respect to meaning and competence. Research and practical implications for the findings as well as directions for future research are suggested.

Empowerment that provides employees with greater decision-making ability and discretionary power over how they perform their work and serve customers is considered an important management tool in the quality of service provision (Spreitzer, 1995 and Hancer and George, 2003). In the hospitality industry, frontline employees act as boundary spanners and are often torn between a myriad of supervisor's and customers’ demands, affording them with considerable latitude, flexibility, and power over the content of their interactions with customers and how work is accomplished can induce a sense of personal achievement and job satisfaction, subsequently reduce the potential for stress (Chiang et al., 2009, Chow et al., 2006 and Hancer and George, 2003). Despite its potential benefits, studies of psychological empowerment are rather limited in the hospitality industry (Hancer and George, 2003). While the idea of providing employees with flexibility, autonomy, and discretion to serve customers is intuitively appealing, empowerment is an approach which is not universally embraced by all countries (Hui et al., 2004a and Randolph and Sashkin, 2002). Cross-cultural studies (e.g., Hirst et al., 2008, Hui et al., 2004a and Robert et al., 2000) have established that congruence between employees’ cultural values and management practices is fundamental to their successful implementation. For example, the unique norms and values inherent in different cultures affect the way employees are motivated (Chiang and Birtch, 2007). In Western cultures (typically highly individualistic), theories about performance tend to focus on the individual dispositional attributes and competencies (Betancourt and Weiner, 1982 and Staw, 1980). By contrast, Asian cultures (typically collectivistic) tend to value harmonious working relationships and view performance a result of joint responsibility and team effort (Hofstede, 2001). Moreover, previous cross-cultural studies have alerted us the potential impacts of cultural values on the effectiveness of empowerment. Hui et al.’s (2004a) study found that the effects of empowerment on job satisfaction vary according to an individual's power distance value. Robert et al. (2000) similarly found a negative effect for empowerment in India versus other countries sampled. These studies highlight the fact that empowerment practices considered as effective in one country may not be suitable in another cultural setting. Some authors (e.g., Kirkman and Shapiro, 2001 and Robert et al., 2000) have therefore called for additional work that explicates and extends earlier efforts to the cross-national setting. Our purpose is to address these calls for the empirical examination of empowerment under the moderation of the collectivistic values. Since the seminal work of Thomas and Velthouse (1990) and Spreitzer (1995), psychological empowerment is defined as consisting of four components: meaning (perceived work value), competence (feeling of self-efficacy), self-determination (sense of control), and impact (ability to influence). While research supports this multi-dimensional conceptualization (Fulford and Enz, 1995 and Hancer and George, 2003), inconsistent results were found between the individual dimensions of empowerment and job satisfaction. For example, Liden et al. (2000) investigated the mediating effects of empowerment on the relationship between job characteristics and satisfaction among service employees. Only the dimensions of meaning and competence were found to be significant. Fulford and Enz (1995) reported in their study of service employees that self-determination had no effect on job satisfaction while meaning and impact were significant predictors. Ambivalent findings imply that the four dimensions of psychological empowerment exhibit differential influences on employees’ job satisfaction and, hence, merit further investigation. In addition, inconsistent findings may be due to the moderating influence of employees’ value orientation (Robert et al., 2000). Given that empowerment's conceptualization has been acknowledged as being bounded by cultural differences (Hui et al., 2004a and Kirkman and Shapiro, 2001), examining its dimensions independently is likely to improve our understanding of which specific component(s) of empowerment that is/are (not) motivating. These findings are particularly important to international hotels as they attempt to empower employees across different cultural settings. They also allow hotels to tailor their programs to suit different cultural requirements.