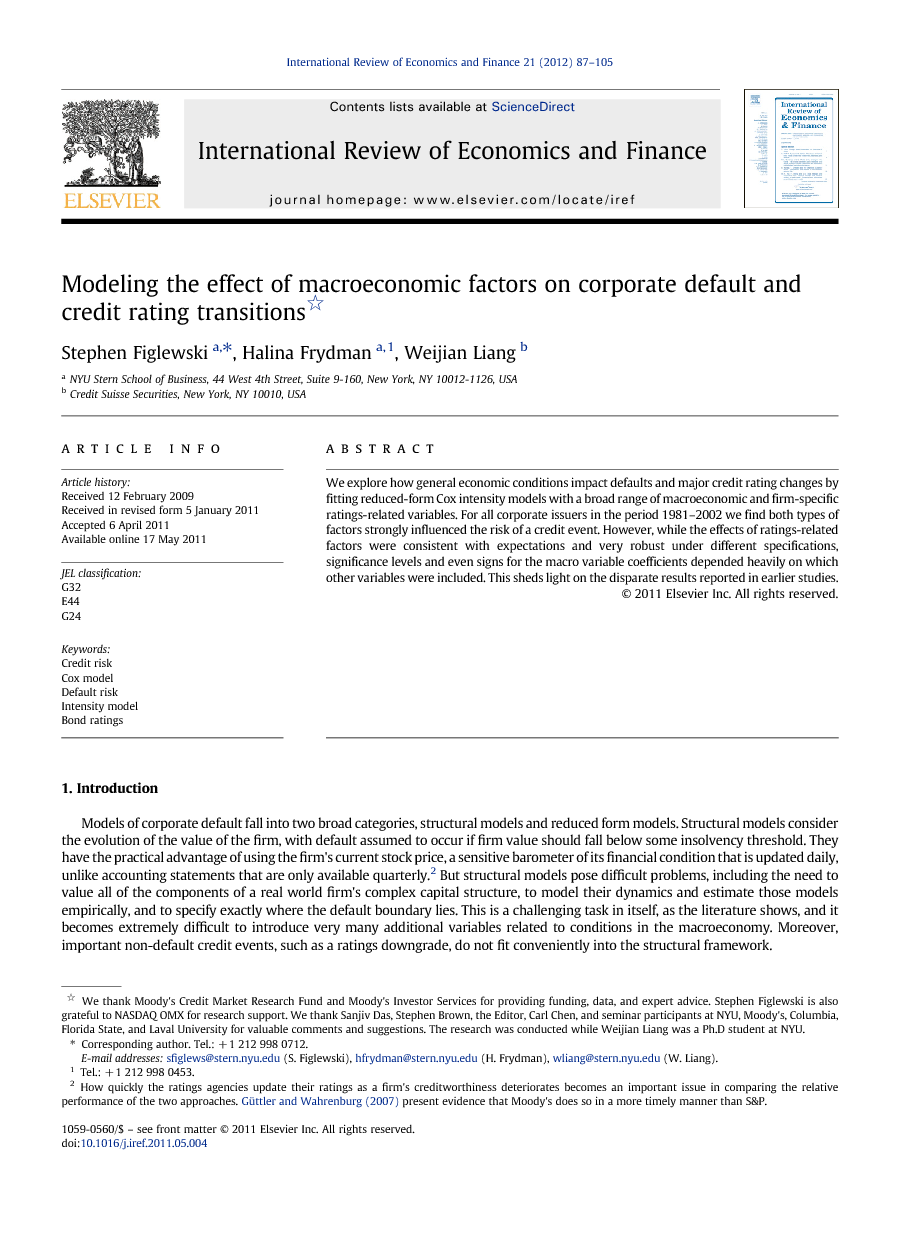 We explore how general economic conditions impact defaults and major credit rating changes by fitting reduced-form Cox intensity models with a broad range of macroeconomic and firm-specific ratings-related variables. For all corporate issuers in the period 1981–2002 we find both types of factors strongly influenced the risk of a credit event. However, while the effects of ratings-related factors were consistent with expectations and very robust under different specifications, significance levels and even signs for the macro variable coefficients depended heavily on which other variables were included. This sheds light on the disparate results reported in earlier studies.

This is the first study to examine such a broad range of rating history related and macroeconomic factors in a Cox model specification for credit risk. In this framework, we have been able to increase the number of observations in our sample by working with individual firm data, rather than aggregate default frequencies by ratings class as in earlier studies. We also have been able to access Moody's comprehensive database covering credit events in the full population of rated firms over a long time period. Finally, we limited the credit events under consideration to default and two major changes of ratings class, which allowed larger numbers of firms in the “at risk” population for each type of transition. This broad look at the problem suggests several conclusions. Overall, we confirmed that incorporating macroeconomic factors along with ratings-related variables in reduced form models of default intensity leads to a highly statistically significant increase in explanatory power. Our estimates of the effects of rating-specific factors confirm a variety of results from earlier studies. Specifically, we found that credit ratings reflected intensity differences correctly in every case. Higher rated firms had lower intensity of default than lower rated firms and had higher upgrade intensity. There is a “ratings drift” or “momentum” effect, by which a firm that has been downgraded (upgraded) in the recent past has a higher intensity of default or of being downgraded (upgraded) again than a firm in the same rating category that has not experienced a recent downgrade (upgrade). There is also evidence of an “aging” effect, such that the intensity of occurrence of a credit event depends on how long the firm has been rated. In particular, a recently rated firm has lower default intensity than a seasoned firm in the same ratings class. Similarly, a recently rated speculative grade firm in a B or Ba category has a lower intensity of being upgraded to the investment class. We found that the intensity of occurrence of credit events was different for firms that began as investment grade and were subsequently downgraded into a speculative ratings class (“fallen angels”), and for firms that started as speculative and have been upgraded (“rising stars”), than for firms that are still in the same broad investment or speculative grade category that they started in. One finding of considerable importance is that the coefficients on the ratings-based factors and their significance levels are only slightly affected by addition of macroeconomic factors to the specification. This implies that the information obtained from considering the macro variables is incremental to that contained in a firm's credit rating history alone. In the model of the transition into default with macro covariates, none of the four measures of General market conditions provided useful information about default hazards when firm-specific covariates and other macro variables, i.e., direction of economy and financial conditions variables, were included in the specification. Similarly, in the estimation of the hazard of the downgrade transition (from an investment grade to speculative grade), the model with the direction of economy and financial conditions variables statistically dominated the model with the GMC variables. This leads to the general conclusion that the direction of economy and financial conditions variables play a more important role in modeling downgrade transitions than the GMC variables. For both downward transitions, the Change in Consumer Sentiment was a highly significant variable, but it did not provide any explanatory power for upgrades from speculative to investment categories. Two GMC variables, unemployment and inflation, appear in the intensity model for the upgrade transition, in addition to Real GDP growth and three financial conditions variables. High unemployment and high inflation are both strongly associated with the reduction in the intensity of upgrade. Real GDP growth has a seemingly anomalous, but highly significant, negative effect on the intensity of upgrade. We suspect that this negative effect may indicate that it is easier for Moody's to distinguish a more creditworthy firm from other firms in its cohort when most firms are doing badly than when they all are doing well. In summary, our results represent a broad first cut at incorporating a wide range of measures of the macroeconomic environment and of firms' rating histories into reduced-form Cox models for the hazard rates of several important credit events. Further research along these lines is surely warranted and can be expected to refine our understanding of this important area.