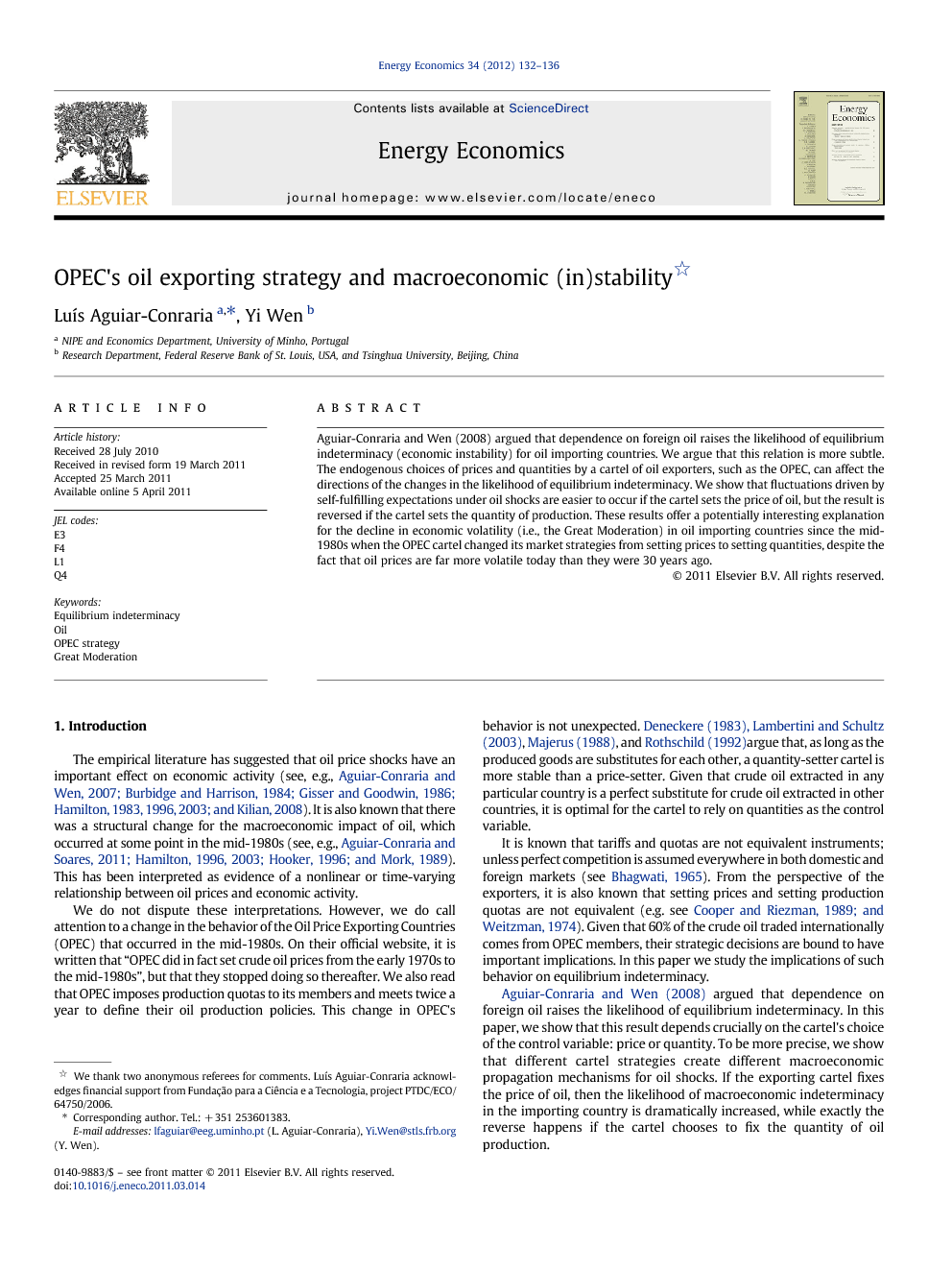 Aguiar-Conraria and Wen (2008) argued that dependence on foreign oil raises the likelihood of equilibrium indeterminacy (economic instability) for oil importing countries. We argue that this relation is more subtle. The endogenous choices of prices and quantities by a cartel of oil exporters, such as the OPEC, can affect the directions of the changes in the likelihood of equilibrium indeterminacy. We show that fluctuations driven by self-fulfilling expectations under oil shocks are easier to occur if the cartel sets the price of oil, but the result is reversed if the cartel sets the quantity of production. These results offer a potentially interesting explanation for the decline in economic volatility (i.e., the Great Moderation) in oil importing countries since the mid-1980s when the OPEC cartel changed its market strategies from setting prices to setting quantities, despite the fact that oil prices are far more volatile today than they were 30 years ago.

The empirical literature has suggested that oil price shocks have an important effect on economic activity (see, e.g., Aguiar-Conraria and Wen, 2007, Burbidge and Harrison, 1984, Gisser and Goodwin, 1986, Hamilton, 1983, Hamilton, 1996, Hamilton, 2003 and Kilian, 2008). It is also known that there was a structural change for the macroeconomic impact of oil, which occurred at some point in the mid-1980s (see, e.g., Aguiar-Conraria and Soares, 2011, Hamilton, 1996, Hamilton, 2003, Hooker, 1996 and Mork, 1989). This has been interpreted as evidence of a nonlinear or time-varying relationship between oil prices and economic activity. We do not dispute these interpretations. However, we do call attention to a change in the behavior of the Oil Price Exporting Countries (OPEC) that occurred in the mid-1980s. On their official website, it is written that “OPEC did in fact set crude oil prices from the early 1970s to the mid-1980s”, but that they stopped doing so thereafter. We also read that OPEC imposes production quotas to its members and meets twice a year to define their oil production policies. This change in OPEC's behavior is not unexpected. Deneckere, 1983 and Lambertini and Schultz, 2003, Majerus (1988), and Rothschild (1992)argue that, as long as the produced goods are substitutes for each other, a quantity-setter cartel is more stable than a price-setter. Given that crude oil extracted in any particular country is a perfect substitute for crude oil extracted in other countries, it is optimal for the cartel to rely on quantities as the control variable. It is known that tariffs and quotas are not equivalent instruments; unless perfect competition is assumed everywhere in both domestic and foreign markets (see Bhagwati, 1965). From the perspective of the exporters, it is also known that setting prices and setting production quotas are not equivalent (e.g. see Cooper and Riezman, 1989 and Weitzman, 1974). Given that 60% of the crude oil traded internationally comes from OPEC members, their strategic decisions are bound to have important implications. In this paper we study the implications of such behavior on equilibrium indeterminacy. Aguiar-Conraria and Wen (2008) argued that dependence on foreign oil raises the likelihood of equilibrium indeterminacy. In this paper, we show that this result depends crucially on the cartel's choice of the control variable: price or quantity. To be more precise, we show that different cartel strategies create different macroeconomic propagation mechanisms for oil shocks. If the exporting cartel fixes the price of oil, then the likelihood of macroeconomic indeterminacy in the importing country is dramatically increased, while exactly the reverse happens if the cartel chooses to fix the quantity of oil production.

This paper studies the consequence of reliance on foreign oil for macroeconomic (in)stability. We showed that the likelihood of equilibrium indeterminacy is a function of the market strategy of the oil exporting countries. In particular, indeterminacy arises more easily for oil importing countries if the oil cartel sets prices and the reverse is true if it sets quantities. We are perfectly aware that our model is highly stylized, at least in four aspects. (i) It does not model international trade. Instead it assumes balanced trade (imports are fully paid in goods). This simplification avoids dealing with exchange rates and endogenous demand for the exported goods of oil importing countries. (ii) It does not model the behavior of the oil exporting cartel in a game theoretic framework. (iii) There is no endogenous oil supply or production in the oil-importing country. (iv) The mobility of labor and capital across borders is not considered. Our results may hinge on these assumptions. Extending the model to include standard features of an open economy and allow domestic production of oil and factor mobility is left as a future research topic. In spite of these simplifications, we believe that our results are sufficiently interesting. We showed that the relation between oil-dependence and equilibrium indeterminacy is more subtle than what was described in Aguiar-Conraria and Wen (2008). Aguiar-Conraria and Wen (2008) concluded that the stronger the dependence on foreign oil the larger the likelihood of indeterminacy. In this paper we showed that this is true only if one assumes that oil exporters act like a cartel that fixes the price of oil (or at least if the supply curve is very price elastic). If, instead, oil exporters fix the quantity then the result is completely reversed — indeterminacy becomes much more unlikely. Using the information provided by OPEC, we know that OPEC's market strategy has changed in the 1980s. Combining that information with the implications of our model, it is possible that the U.S. economy has moved from a state of equilibrium indeterminacy to a state of equilibrium determinacy. This implication provides an alternative explanation to the Great Moderation.