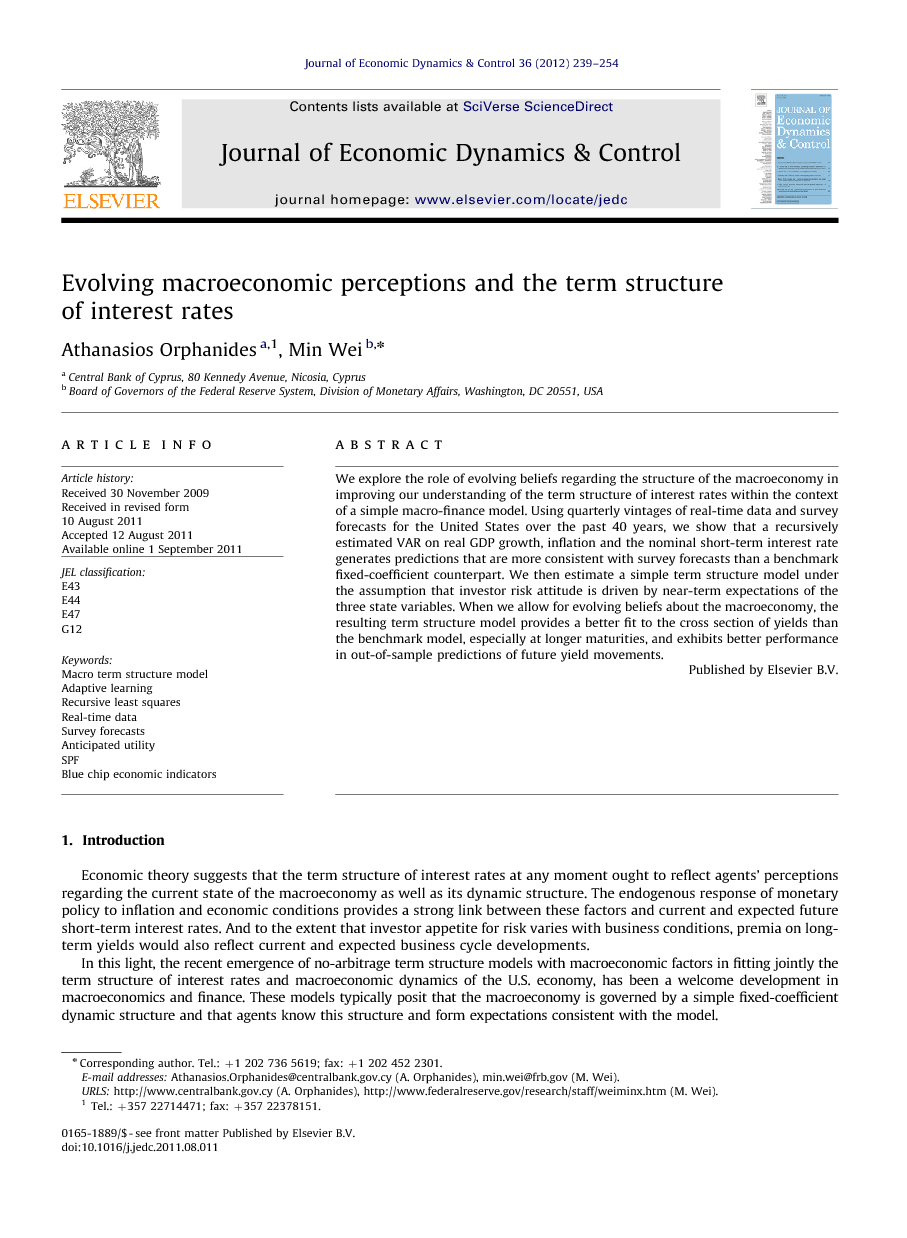 We explore the role of evolving beliefs regarding the structure of the macroeconomy in improving our understanding of the term structure of interest rates within the context of a simple macro-finance model. Using quarterly vintages of real-time data and survey forecasts for the United States over the past 40 years, we show that a recursively estimated VAR on real GDP growth, inflation and the nominal short-term interest rate generates predictions that are more consistent with survey forecasts than a benchmark fixed-coefficient counterpart. We then estimate a simple term structure model under the assumption that investor risk attitude is driven by near-term expectations of the three state variables. When we allow for evolving beliefs about the macroeconomy, the resulting term structure model provides a better fit to the cross section of yields than the benchmark model, especially at longer maturities, and exhibits better performance in out-of-sample predictions of future yield movements.

In this paper we examine a simple model allowing evolving beliefs regarding macroeconomic dynamics and examine their role in explaining the term structure of interest rates. In each period, agents re-estimate a VAR on real GDP growth, inflation and the nominal short rate, and use the estimated VAR to form expectations. Using quarterly vintages of real-time data and survey forecasts of both macro variables and yields for the United States, we show that allowing for evolving macroeconomic perceptions in this manner generates predictions about the future path of the economy that are more consistent both with survey forecasts and with future realized values, when compared to a benchmark model that imposes rational expectations and a fixed-coefficient VAR. We then explore the role of the time-variation in beliefs regarding the structure of the economy for understanding the term-structure of interest rates. To that end, we price zero-coupon bonds of different maturities under the assumption that investor risk attitude is driven by expectations about the three macro variables in the following period. We find that when we allow for evolving beliefs about the macroeconomy, the resulting term structure model provides a better fit to the cross section of yields than the benchmark model—especially for longer maturities—and exhibits better performance in out-of-sample prediction of yield movements. Supplementing the data with information from survey forecasts during the first-step VAR estimation further reduces the discrepancies between model-implied forecasts and survey expectations not only for macro variables but also for bond yields. Our main result is that allowing for time variation in the perceived mean, slope and conditional volatilities of macroeconomic variables can greatly facilitate our understanding of the linkages between the macroeconomy and the term structure. In addition, when we introduce an additional latent factor that is uncorrelated with the macro variables, we find that the latent factor accounts for a smaller portion of yield curve variations in our preferred time-varying model than in the benchmark fixed-coefficient model. Accounting for evolving macroeconomic perceptions, as reflected by parameter variations in the perceived dynamic process governing the economy, can help reconcile the seemingly conflicting evidence that on the one hand, interest rates respond strongly to news about the key macroeconomic variables (as demonstrated by event studies), while on the other hand, yields appear to have low explanatory power for subsequent realizations of the macro variables. Our findings also demonstrate the usefulness of imposing additional discipline on term structure models using information from survey forecasts. Existing work in a latent-factor setting has shown that such information can materially improve estimation of the expected future short rate and the expected excess returns on longer-term bonds. In a macro term structure framework, it also helps to ensure that the underlying macroeconomic model correctly approximates the evolving nature of the process governing the formation of expectations about the outlook of the economy by bond market participants at the time when bond yields are observed. In summary, we conclude that accounting for evolving macroeconomic perceptions is a critical step towards a better understanding of the term structure of interest rates in the context of macro-finance models. One caveat of our approach is that in this model, like in all models employing anticipated utility, agents foresee future revisions to their parameter estimates, yet ignore such uncertainties when pricing bonds and other assets. In other words, time variations in parameter estimates are not priced. This might be a good approximation to what agents do in the real world, and avoids the technical difficulties brought on by allowing time variations not only in the “endpoints” and volatilities but also in the slope coefficients. However, to be fully consistent we need a model where agents update not only their point estimates but also the distributions associated with those point estimates. We leave this to future research.