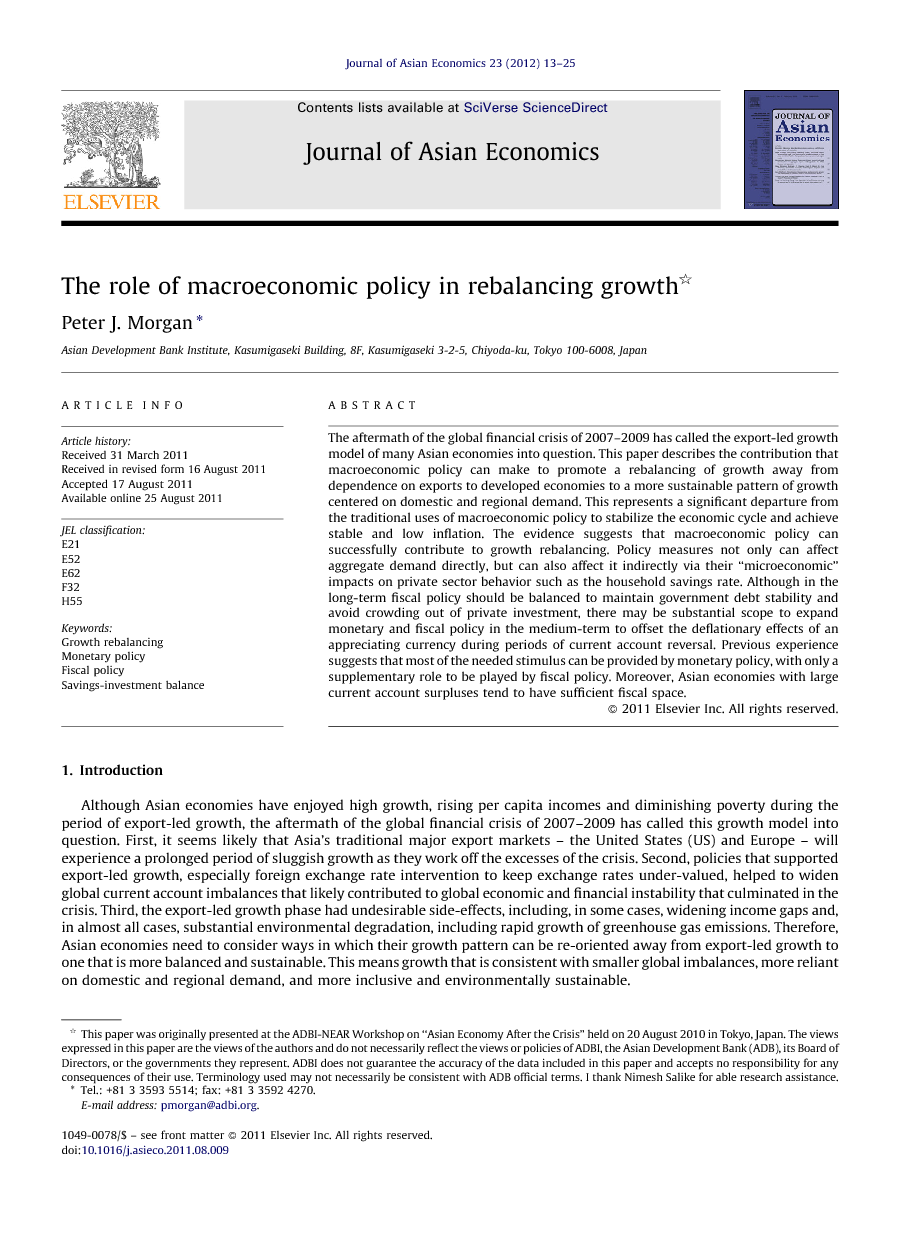 The aftermath of the global financial crisis of 2007–2009 has called the export-led growth model of many Asian economies into question. This paper describes the contribution that macroeconomic policy can make to promote a rebalancing of growth away from dependence on exports to developed economies to a more sustainable pattern of growth centered on domestic and regional demand. This represents a significant departure from the traditional uses of macroeconomic policy to stabilize the economic cycle and achieve stable and low inflation. The evidence suggests that macroeconomic policy can successfully contribute to growth rebalancing. Policy measures not only can affect aggregate demand directly, but can also affect it indirectly via their “microeconomic” impacts on private sector behavior such as the household savings rate. Although in the long-term fiscal policy should be balanced to maintain government debt stability and avoid crowding out of private investment, there may be substantial scope to expand monetary and fiscal policy in the medium-term to offset the deflationary effects of an appreciating currency during periods of current account reversal. Previous experience suggests that most of the needed stimulus can be provided by monetary policy, with only a supplementary role to be played by fiscal policy. Moreover, Asian economies with large current account surpluses tend to have sufficient fiscal space.

Although Asian economies have enjoyed high growth, rising per capita incomes and diminishing poverty during the period of export-led growth, the aftermath of the global financial crisis of 2007–2009 has called this growth model into question. First, it seems likely that Asia's traditional major export markets – the United States (US) and Europe – will experience a prolonged period of sluggish growth as they work off the excesses of the crisis. Second, policies that supported export-led growth, especially foreign exchange rate intervention to keep exchange rates under-valued, helped to widen global current account imbalances that likely contributed to global economic and financial instability that culminated in the crisis. Third, the export-led growth phase had undesirable side-effects, including, in some cases, widening income gaps and, in almost all cases, substantial environmental degradation, including rapid growth of greenhouse gas emissions. Therefore, Asian economies need to consider ways in which their growth pattern can be re-oriented away from export-led growth to one that is more balanced and sustainable. This means growth that is consistent with smaller global imbalances, more reliant on domestic and regional demand, and more inclusive and environmentally sustainable. This paper contributes to that debate by analyzing ways that macroeconomic policy can contribute to such growth rebalancing. This is fundamentally a departure from the traditional tasks of macroeconomic policy, i.e., stabilization of the economic cycle and, in the longer-term, achievement of price stability. Moreover, the time frame of such policies is considerably longer than is usual in the case of macroeconomic stabilization policy. Such a long period means that there is less scope for a prolonged expansion of fiscal policy, since it eventually would hit constraints of fiscal sustainability. In other words, fiscal policy should still aim to be neutral over the cycle. Therefore, rather than simply contributing directly to aggregate demand, such policies should aim to influence the overall investment-savings balance in other ways as well. Targeting the current account balance, which is the same as the gap between savings and investment, is inherently difficult. This is because the determinants of investment and savings are many, complex, and subject to all manner of feedback loops. This point has been forcefully argued by McKinnon (2010) among others. The case of Japan is an object lesson. Although the US dollar fell by 62% against the Japanese yen between its peak of ¥260 in February 1985 to just ¥99 in mid-1994, adjustment of the current account was temporary. In fact, Japan's current account surplus in the decade following the Plaza Accord of 1985 averaged 2.7% of gross domestic product (GDP), versus only 1.4% in the period 1980–1985. Moreover, the notion of growth rebalancing should not be limited to ways to reduce the current account balance. Asian economies need to achieve higher rates of growth from domestic and regional demand to make up for the looming shortfall of export growth to the developed economies. Therefore, policies are needed to promote the growth of domestic and regional demand, and to facilitate the supply-side adjustments that need to accompany such rebalancing. Policy measures also need to aim to promote growth that is more sustainable from the standpoint of inclusiveness and environmental sustainability. In view of these considerations, this paper examines not only broad policies for managing aggregate demand – taxes, spending, interest rates, and currency policy – but also policies with expected “microeconomic” effects, such as spending on social safety nets, changes in income distribution, changes in tax rates, deepening of financial markets, and increasing macroeconomic and financial stability. The paper is organized as follows. Section 2 reviews the relevant literature on recommendations for achieving rebalancing via macroeconomic policy. Section 3 reviews the current state of imbalances within the region. Section 4 examines the feasibility of using macroeconomic policy to achieve rebalancing. Section 5 describes specific measures to stimulate domestic demand, including consumption and investment. Section 6 examines the contribution of improving the policy frameworks for macroeconomic and financial stability, including management of capital flows. Section 7 concludes.

The evidence suggests that macroeconomic policy can make a significant contribution to altering the investment–savings balance and promoting a rebalancing of growth in Asian economies away from dependence on exports to developed economies to a more sustainable pattern of growth centered on domestic and regional demand. This represents a significant departure from the traditional uses of macroeconomic policy to stabilize the economic cycle and achieve stable and low inflation. Moreover, macroeconomic policy measures not only can affect aggregate demand directly, but can also affect it indirectly via their “microeconomic” impacts on private sector behavior. These policies are summarized in Table 4.Although in the long-term fiscal policy should be balanced to maintain government debt stability and avoid crowding out of private investment, there may be significant scope to expand monetary and fiscal policy in the medium-term to support aggregate demand to offset the deflationary effects of an appreciating currency during a period of current account surplus reversal. The evidence suggests that the deflationary effects of such appreciation episodes have tended to be overestimated, leading to an overshoot of stimulus which then led to inflation and/or asset bubbles. This suggests that most of the needed stimulus can be provided by monetary policy, with only a supplementary role to be played by fiscal policy. The evidence suggests that excessive saving rather than insufficient investment is the main factor behind high current account surpluses in Asian economies. This implies that measures to encourage consumption, either by raising the level of household disposable income or reducing the savings are likely to have the highest payoff in terms of reducing imbalances. Increased spending on social protection, including health insurance, unemployment insurance and pensions, as well as investment in education, are key ways to reduce household demand for precautionary savings. In countries such as the PRC, where the share of households in national income is abnormally low, income transfers from the corporate sector can also play a significant role in boosting income. Governments can raise investment spending directly through increased government investment, especially infrastructure investment. There also may be large payoffs to making investments to improve the climate for private investment. Cutting and simplifying corporate tax rates and payment procedures can also encourage investment. Government efforts to deepen financial markets can also contribute, including improving the infrastructure for corporate bond markets, developing credit databases and other infrastructure for SMEs, and developing the infrastructure for microfinance. Dismantling of schemes to support exports, including foreign exchange intervention and export subsidies, can have direct positive impacts on the fiscal balance as well as promoting a reduction of net exports. Finally, in view of the strong trade linkages in Asia resulting from production chains, a policy of coordinated regional exchange rate adjustment and accompanying macroeconomic policy changes is likely to be much more effective than unilateral attempts at rebalancing growth. Improvement of frameworks for macroeconomic and financial stability can also support domestic demand by reducing uncertainty. This includes giving more explicit weight to financial stability as an objective of monetary policy, developing a macroprudential framework for financial surveillance and regulation, and refining policy tools for management of capital flows.