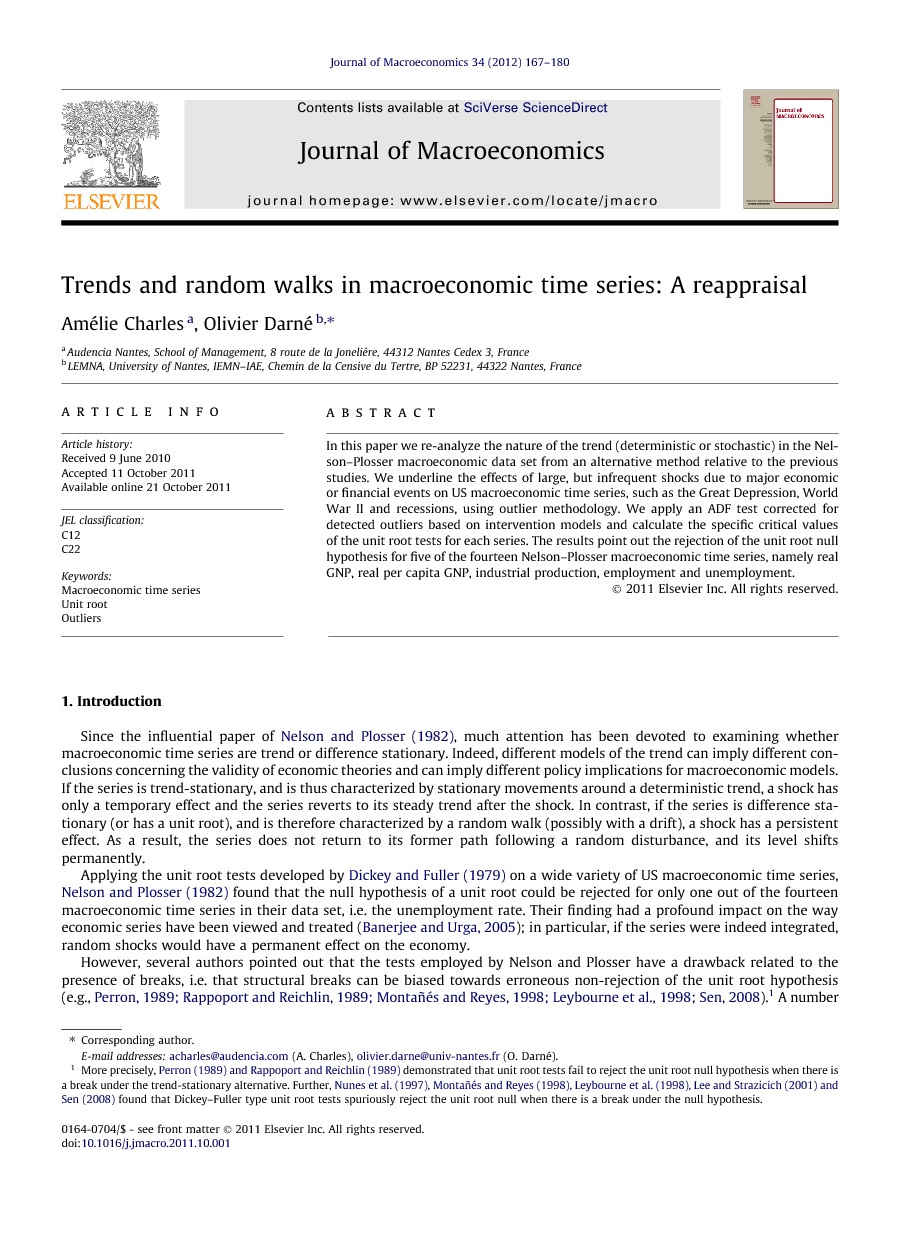 In this paper we re-analyze the nature of the trend (deterministic or stochastic) in the Nelson–Plosser macroeconomic data set from an alternative method relative to the previous studies. We underline the effects of large, but infrequent shocks due to major economic or financial events on US macroeconomic time series, such as the Great Depression, World War II and recessions, using outlier methodology. We apply an ADF test corrected for detected outliers based on intervention models and calculate the specific critical values of the unit root tests for each series. The results point out the rejection of the unit root null hypothesis for five of the fourteen Nelson–Plosser macroeconomic time series, namely real GNP, real per capita GNP, industrial production, employment and unemployment.

Since the influential paper of Nelson and Plosser (1982), much attention has been devoted to examining whether macroeconomic time series are trend or difference stationary. Indeed, different models of the trend can imply different conclusions concerning the validity of economic theories and can imply different policy implications for macroeconomic models. If the series is trend-stationary, and is thus characterized by stationary movements around a deterministic trend, a shock has only a temporary effect and the series reverts to its steady trend after the shock. In contrast, if the series is difference stationary (or has a unit root), and is therefore characterized by a random walk (possibly with a drift), a shock has a persistent effect. As a result, the series does not return to its former path following a random disturbance, and its level shifts permanently. Applying the unit root tests developed by Dickey and Fuller (1979) on a wide variety of US macroeconomic time series, Nelson and Plosser (1982) found that the null hypothesis of a unit root could be rejected for only one out of the fourteen macroeconomic time series in their data set, i.e. the unemployment rate. Their finding had a profound impact on the way economic series have been viewed and treated (Banerjee and Urga, 2005); in particular, if the series were indeed integrated, random shocks would have a permanent effect on the economy. However, several authors pointed out that the tests employed by Nelson and Plosser have a drawback related to the presence of breaks, i.e. that structural breaks can be biased towards erroneous non-rejection of the unit root hypothesis (e.g., Perron, 1989, Rappoport and Reichlin, 1989, Montañés and Reyes, 1998, Leybourne et al., 1998 and Sen, 2008).1 A number of tests have been developed to take into account a structural change, where the date of the break is a priori unknown, namely the breakpoint is determined endogenously from the data.2 In this way, many researchers revisited the Nelson–Plosser empirical results using unit root tests with structural breaks, allowing for one (e.g., Zivot and Andrews, 1992, Li, 1995, Perron, 1997, Sen, 2004 and Montañés et al., 2005) or two ( Lumsdaine and Papell, 1997, Lee and Strazicich, 2003 and Papell and Prodan, 2007) structural changes.3 Most of these studies tended to contradict the findings of Nelson–Plosser, i.e. there was less evidence in favor of the unit root hypothesis. Nevertheless, the unit root tests with structural breaks impose a number of structural breaks without prior knowledge of their number, which may strongly bias the results of the tests and the estimation of the dates of the structural changes (Kim et al., 2000). In addition, these tests generally propose three models according to the type of breaks (changes in the intercept of the trend function, changes in the slope of the trend function, or changes in the intercept and the slope of the trend function) but do not select them. This can give different results depending on the model chosen ( Lee and Strazicich, 2001, Sen, 2003 and Montañés et al., 2005). It has also been shown that unit root tests can be disturbed by the presence of outliers (Franses and Haldrup, 1994, Lucas, 1995a, Lucas, 1995b, Shin et al., 1996, Yin and Maddala, 1997 and Cavaliere and Georgiev, 2009), especially additive outliers, which affect only a single observation at some points in time series and not its future values. Indeed, the presence of additive outliers induces in the errors a negative moving-average component, which causes the unit root tests to exhibit substantial size distortions towards rejecting the null hypothesis too often (Vogelsang, 1999 and Rodríguez, 2004).4 For these reasons, we re-examine the Nelson–Plosser data set from a new perspective. First, we consider that the major economic events represent major shocks that occur infrequently (low-frequency shocks), but that their occurrence is randomly determined. This approach results from the fact that there are numerous examples of random, heterogeneous, and infrequent events that have a dramatic impact on the economy, especially for long-term economic series (e.g., oil crises, wars, financial slumps, changes of political regime, and natural catastrophes). We therefore seek the presence of these shocks, which can have a permanent or temporary effect, in the form of outliers, providing a certain amount of information about the nature and magnitude of the economic shocks in the US. Next, we seek the deterministic or stochastic nature of the trend in the Nelson–Plosser macroeconomic time series by estimating intervention models based upon the outlier analysis and performing Dickey–Fuller unit root tests on the intervention models as in Balke and Fomby, 1991 and Bradley and Jansen, 1995 and Rodríguez (2004). In this case, the random walk with drift implies permanent shocks that are assumed to be randomly generated every observation period (high-frequency shocks).5 This approach allows to distinguishing between frequent small shocks due to period-by-period permanent innovations (as in the case of a stochastic trend) and infrequent large shocks due to significant economic and financial events. Our results reject a unit root for five of the fourteen series in the Nelson–Plosser data set, namely real GNP, real per capita GNP industrial production, employment and unemployment. These results are confirmed by applying robust unit root tests proposed by Cavaliere and Georgiev (2009). The paper is structured as follows. In Section 2, the methodology for detecting outliers is described. The detected outliers that can be associated with major economic or financial events are discussed in Section 3. Section 4 presents the results of the Dickey–Fuller tests on the intervention models, interprets these results, and provides a comparison with a robust approach. Section 5 concludes the paper.

This paper re-examined the nature of the trend in the Nelson–Plosser data set from an alternative method relative to the previous studies. We underlined the effects of large, but infrequent shocks due to major economic or financial events on US macroeconomic time series, such as the Great Depression, World War II and recessions, using outlier methodology. We applied an ADF test corrected for detected outliers based on intervention models and found the rejection of the unit root null hypothesis for five of the fourteen Nelson–Plosser macroeconomic time series, namely real GNP, real per capita GNP, industrial production, employment and unemployment, suggesting that these variables are affected by both low and high-frequency shocks. Our findings are confirmed by those obtained from the robust QML approach suggested by Cavaliere and Georgiev (2009). The outlier approach can be seen as an alternative approach for testing a unit root as compared to the literature that test for a unit root with structural breaks, which is robust to outliers. It would be interesting to compare these different approaches in the presence of possible intercept and trend shifts that might be present in some (trend-break stationary) macroeconomic time series. Future research should investigate these approaches in the cointegrating regression framework.