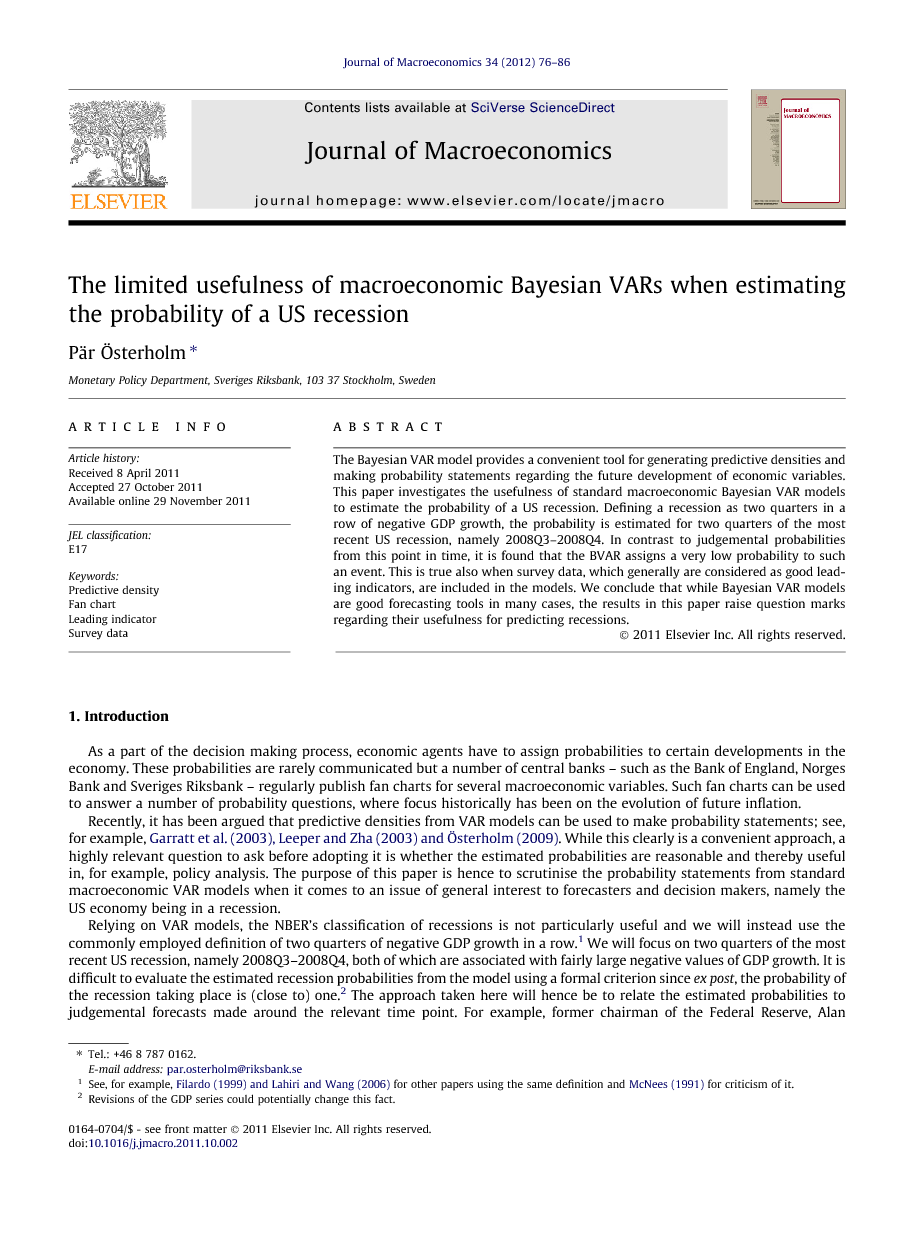 The Bayesian VAR model provides a convenient tool for generating predictive densities and making probability statements regarding the future development of economic variables. This paper investigates the usefulness of standard macroeconomic Bayesian VAR models to estimate the probability of a US recession. Defining a recession as two quarters in a row of negative GDP growth, the probability is estimated for two quarters of the most recent US recession, namely 2008Q3–2008Q4. In contrast to judgemental probabilities from this point in time, it is found that the BVAR assigns a very low probability to such an event. This is true also when survey data, which generally are considered as good leading indicators, are included in the models. We conclude that while Bayesian VAR models are good forecasting tools in many cases, the results in this paper raise question marks regarding their usefulness for predicting recessions.

As a part of the decision making process, economic agents have to assign probabilities to certain developments in the economy. These probabilities are rarely communicated but a number of central banks – such as the Bank of England, Norges Bank and Sveriges Riksbank – regularly publish fan charts for several macroeconomic variables. Such fan charts can be used to answer a number of probability questions, where focus historically has been on the evolution of future inflation. Recently, it has been argued that predictive densities from VAR models can be used to make probability statements; see, for example, Garratt et al., 2003, Leeper and Zha, 2003 and Österholm, 2009. While this clearly is a convenient approach, a highly relevant question to ask before adopting it is whether the estimated probabilities are reasonable and thereby useful in, for example, policy analysis. The purpose of this paper is hence to scrutinise the probability statements from standard macroeconomic VAR models when it comes to an issue of general interest to forecasters and decision makers, namely the US economy being in a recession. Relying on VAR models, the NBER’s classification of recessions is not particularly useful and we will instead use the commonly employed definition of two quarters of negative GDP growth in a row.1 We will focus on two quarters of the most recent US recession, namely 2008Q3–2008Q4, both of which are associated with fairly large negative values of GDP growth. It is difficult to evaluate the estimated recession probabilities from the model using a formal criterion since ex post, the probability of the recession taking place is (close to) one.2 The approach taken here will hence be to relate the estimated probabilities to judgemental forecasts made around the relevant time point. For example, former chairman of the Federal Reserve, Alan Greenspan said in May 2008 in Financial Times that the probability of a recession was larger than 50% and in August 2008, InTrade recession bet put the probability of a recession close to 30%. In a similar spirit, it was mentioned at the budget briefing on the 24th of October 2008 that “according to Moody’s Economy.com, the probability of a national recession increased to 43 percent in August compared with 35 percent in July”. If the models generate recession probabilities that are substantially lower than these numbers, it is a reason to be concerned regarding the properties of the model. Several models are estimated and evaluated. The two benchmark models are (i) a univariate Bayesian AR model for GDP growth and (ii) a trivariate Bayesian VAR model with GDP growth, CPI inflation and the three month treasury bill rate. Both of these specifications are commonly used in empirical work and particularly the popularity of small models – including a measure of real activity, inflation and a nominal interest rate – cannot be overstated in macroeconomic analysis and forecasting; see, for example, Clarida et al., 1999, Rudebusch and Svensson, 1999, Cogley and Sargent, 2001, Primiceri, 2005, Ribba, 2006, Rubaszek and Skrypczynski, 2008 and Berger and Österholm, 2009. Results show that the benchmark models assign very low probabilities to a recession at the investigated time point and the analysis indicates that this is due to the dynamic properties of the model. In an attempt to see whether the usage of leading indicators can improve the estimated probabilities, we augment the benchmark models with a number of variables. Three variables based on survey data are used: the University of Michigan Consumer Sentiment Index, the Institute for Supply Management PMI Composite Index and a measure of bank lending tightening from the Board of Governors of the Federal Reserve’s Senior Loan Officer Survey on Bank Lending Practices. Finally, we augment the models with oil price changes. However, despite the popularity of these variables, only some of them show evidence of marginally being able to improve the models’ recession-prediction ability. None of the estimated models generate recession probabilities that are even close to the judgemental probabilities. The rest of this paper is organised as follows. Section 2 briefly presents the Bayesian VAR model used for the estimation. In Section 3, data are described and the forecasting performance of the benchmark and augmented models is investigated. We also conduct some sensitivity analysis. Finally, Section 4 concludes.

The Bayesian VAR model provides a convenient tool for generating predictive densities and making probability statements regarding the future development of economic variables. However, convenience is obviously not the only criterion that one should take into account when deciding how to estimate probabilities concerning economic events. It is also of great importance that the model in question can generate probabilities of the event that we are interested in that are reasonable. In this paper we have shown that a Bayesian VAR model – which appears well behaved in an out-of-sample forecast exercise – does not do well in forecasting the probability of a recession in 2008Q3–2008Q4. Results show that both the benchmark models and the models that have been augmented with leading indicators assign very low probabilities to a recession. This stands in sharp contrast to the judgemental probabilities concerning a recession from this point in time. Since this shortcoming mainly is due to the dynamic properties of the model, predictive densities from standard macroeconomic models that are built to be well behaved – for example, with strong restrictions based on economic theory – are likely to have similar or worse shortcomings.14 It also means that models with, for example, stochastic volatility such as Clark (2011) – which admittedly provide welcome extensions and improvements in methodology – are likely to only marginally alleviate this problem. We hence conclude that while Bayesian VAR models might are good forecasting tools in many cases, the results in this paper raise question marks regarding their usefulness for predicting recessions. For the specific task of predicting recessions, one should instead use models that have been shown to do this well. Examples include probit models with financial variables or yield spreads; see, for example, Estrella and Mishkin, 1998 and Rudebusch and Williams, 2009 and the references therein. One should still remain humble for the task at hand though; also the models built for this purpose are imperfect tools and will accordingly fail at times. From a more general perspective, one should think twice before making probability statements based on models that are not necessarily well suited for the task. BVARs and other standard macroeconomic models – such as DSGE models – might be both good and convenient tools for many purposes but one has to be aware of their shortcomings. Using them widely and uncritically for making probability statements is not a good idea.