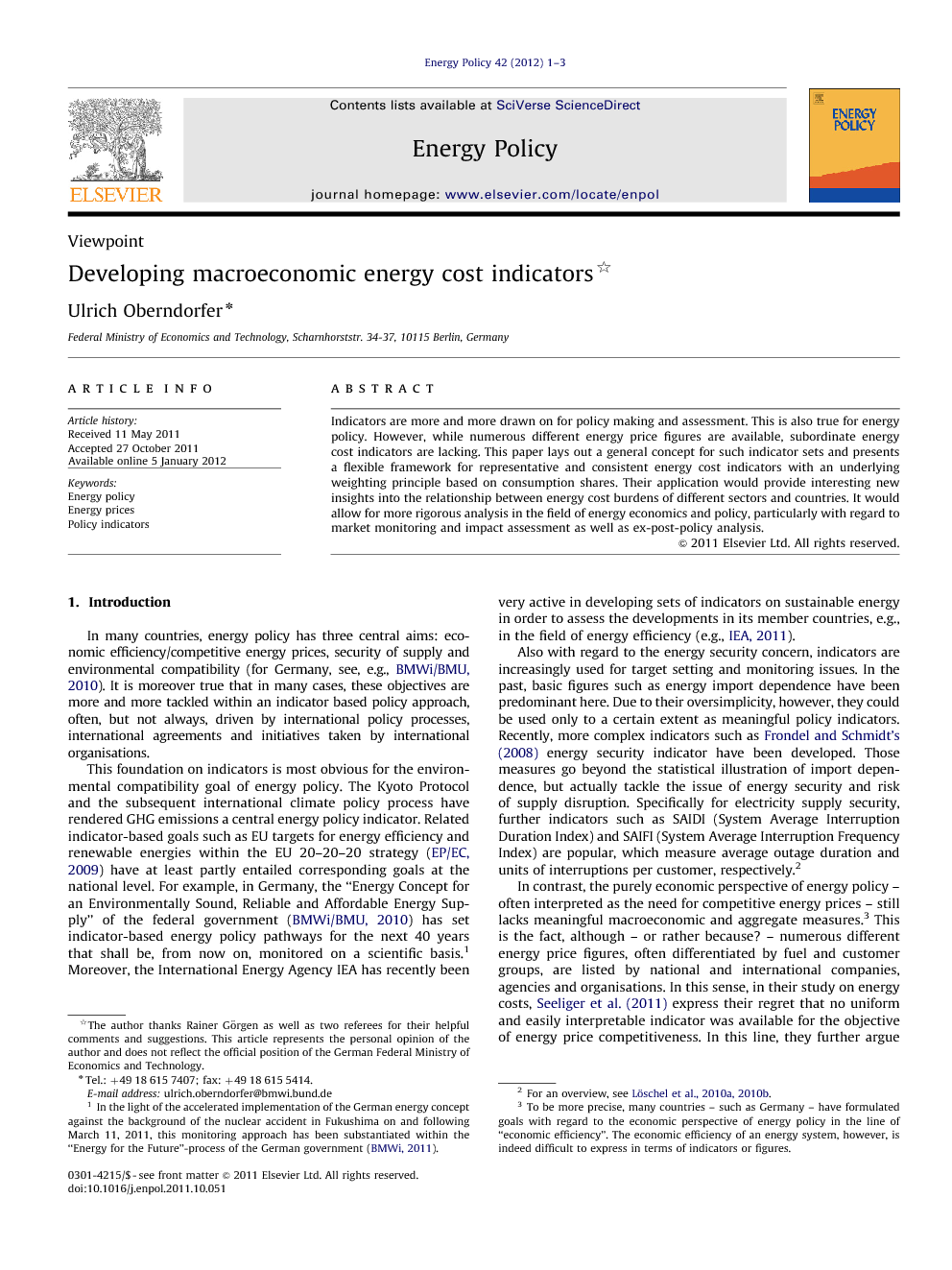 Indicators are more and more drawn on for policy making and assessment. This is also true for energy policy. However, while numerous different energy price figures are available, subordinate energy cost indicators are lacking. This paper lays out a general concept for such indicator sets and presents a flexible framework for representative and consistent energy cost indicators with an underlying weighting principle based on consumption shares. Their application would provide interesting new insights into the relationship between energy cost burdens of different sectors and countries. It would allow for more rigorous analysis in the field of energy economics and policy, particularly with regard to market monitoring and impact assessment as well as ex-post-policy analysis.

In many countries, energy policy has three central aims: economic efficiency/competitive energy prices, security of supply and environmental compatibility (for Germany, see, e.g., BMWi/BMU, 2010). It is moreover true that in many cases, these objectives are more and more tackled within an indicator based policy approach, often, but not always, driven by international policy processes, international agreements and initiatives taken by international organisations. This foundation on indicators is most obvious for the environmental compatibility goal of energy policy. The Kyoto Protocol and the subsequent international climate policy process have rendered GHG emissions a central energy policy indicator. Related indicator-based goals such as EU targets for energy efficiency and renewable energies within the EU 20–20–20 strategy (EP/EC, 2009) have at least partly entailed corresponding goals at the national level. For example, in Germany, the “Energy Concept for an Environmentally Sound, Reliable and Affordable Energy Supply” of the federal government (BMWi/BMU, 2010) has set indicator-based energy policy pathways for the next 40 years that shall be, from now on, monitored on a scientific basis.1 Moreover, the International Energy Agency IEA has recently been very active in developing sets of indicators on sustainable energy in order to assess the developments in its member countries, e.g., in the field of energy efficiency (e.g., IEA, 2011). Also with regard to the energy security concern, indicators are increasingly used for target setting and monitoring issues. In the past, basic figures such as energy import dependence have been predominant here. Due to their oversimplicity, however, they could be used only to a certain extent as meaningful policy indicators. Recently, more complex indicators such as Frondel and Schmidt's (2008) energy security indicator have been developed. Those measures go beyond the statistical illustration of import dependence, but actually tackle the issue of energy security and risk of supply disruption. Specifically for electricity supply security, further indicators such as SAIDI (System Average Interruption Duration Index) and SAIFI (System Average Interruption Frequency Index) are popular, which measure average outage duration and units of interruptions per customer, respectively.2 In contrast, the purely economic perspective of energy policy – often interpreted as the need for competitive energy prices – still lacks meaningful macroeconomic and aggregate measures.3 This is the fact, although – or rather because? – numerous different energy price figures, often differentiated by fuel and customer groups, are listed by national and international companies, agencies and organisations. In this sense, in their study on energy costs, Seeliger et al. (2011) express their regret that no uniform and easily interpretable indicator was available for the objective of energy price competitiveness. In this line, they further argue that such an indicator or indicator set “should be developed in order to efficiently control the objective of price competitiveness and to boost its public recognition”. In this sense, the impact of policies on energy costs is difficult to evaluate as long as no meaningful respective indicator (set) exists. Therefore, this paper develops a simple but general framework for macroeconomic energy cost indicators inspired by Frondel and Schmidt's (2008) energy security indicator that, if applied, could provide insights into the competitiveness of energy prices that sectors and/or countries are facing.4 It makes use of an underlying weighting principle based on energy and fuel consumption shares. The next section lays out the methodology in more detail. Section 3 discusses the framework and concludes.

The above developed framework for macroeconomic energy cost indicators makes use of an underlying weighting principle based on energy and fuel consumption shares. It should provide the basis for such – unit-free – indicators over sectors, countries and time. The above developed framework offers several convenient features in this regard. • Flexibility: The framework is flexible as it allows for respective adjustments if relevant data are not available. • Representativeness: The above developed framework gives a representative picture of the energy cost burden due to the underlying weighting principle based on consumption shares. Energy consumption adjustments in the form of energy efficiency improvements and fuel switching are implicitly taken into account as they affect the respective consumption shares. • Consistency and possible refinement: The framework for macroeconomic cost indicators is consistent as it represents a weighted average of subordinate sectoral indicators. This also implies that the aggregated economy-wide indicator can be refined and broken down on a sectoral basis. Sectoral indicator sets would allow for cross-sectoral comparisons at the national level as well as for international comparisons for specific sectors. Although the relevance of an economy-wide indicator is obvious, also sectoral indicators' features can prove to be highly relevant indeed as in many countries, prices significantly differ between customer groups, e.g., because of scale effects and energy tax differentiation. Of course, also several disclaimers have to be made with regard to the framework developed in this paper. • External costs: External costs are taken into account within the approach only in terms of internalised external costs, i.e., as far as they are actually incorporated in the respective energy prices. Prevailing market failures are not considered. The main reason for this is the approach according to which the indicator should measure the cost burden directly faced by the respective consumers. Besides, valuation problems regarding external costs would otherwise occur. • Data availability: The information base on prices from publicly available sources often exhibits data gaps; moreover, relevant customer cases are often not reported at all (Seeliger et al., 2011). This could render the respective indicator incomplete. However, they would bias the indicator only if prices for customer cases not available would systematically differ from available prices. This could, e.g., be the case for electricity prices the large scale energy intensive industry is facing. Here, there is at least anecdotal evidence for “subsidised” prices in several countries that do not appear in official statistics for confidentiality reasons. • Selection: As mentioned above, the framework ensures that the respective indicator is complete and representative. However, on one hand, the underlying weighting principle based on consumption shares can theoretically lead to a seemingly underrepresentation of extremely high prices for specific customer cases if those high prices lead to a reduction of consumption, e.g., in the form of so-called carbon leakage. On the other hand, extremely low prices for specific customer cases can be seemingly overrepresented if they lead to an increase of consumption, e.g., by attracting additional consumers. Still, this problem cannot be avoided as long as the indicator is intended to be representative. • Sensitivity to choice of PijMAX: As a maximum price has to be chosen, the indicator is not independent of the chosen set of countries, sectors and/or periods. In this sense, also outlier values for Pijk might distort the indicator. Generally, the application of any meaningful energy cost indicator would provide interesting new insights into the relationship between energy cost burdens of different sectors and countries. Particularly, it would allow for more rigorous analysis in the field of energy economics and policy. With corresponding indicator sets at hand, energy market monitoring and impact assessment as well as ex-post-policy analysis with regard to the economic perspective on energy policy could be facilitated and improved. In this sense, the empirical application of the indicators proposed in this paper could provide an interesting direction for future research. The strategies governments follow with regard to the economic perspective on energy policy are often not fully obvious and transparent. Some countries have documented their energy policy goals officially; others have not. As an example, Germany follows the goal of an economically efficient energy system, which, from a conceptual point of view, is not synonymous to the lowest possible energy costs. In an economically efficient energy system, energy prices have a complex role to play. They should reflect the supply and demand situation, including factors like the scarcity of resources as well as input and external costs. In this sense, the interpretation of energy cost indicators, once empirically implemented, will not be simple—the smallest (cost) is not necessarily the most beautiful.