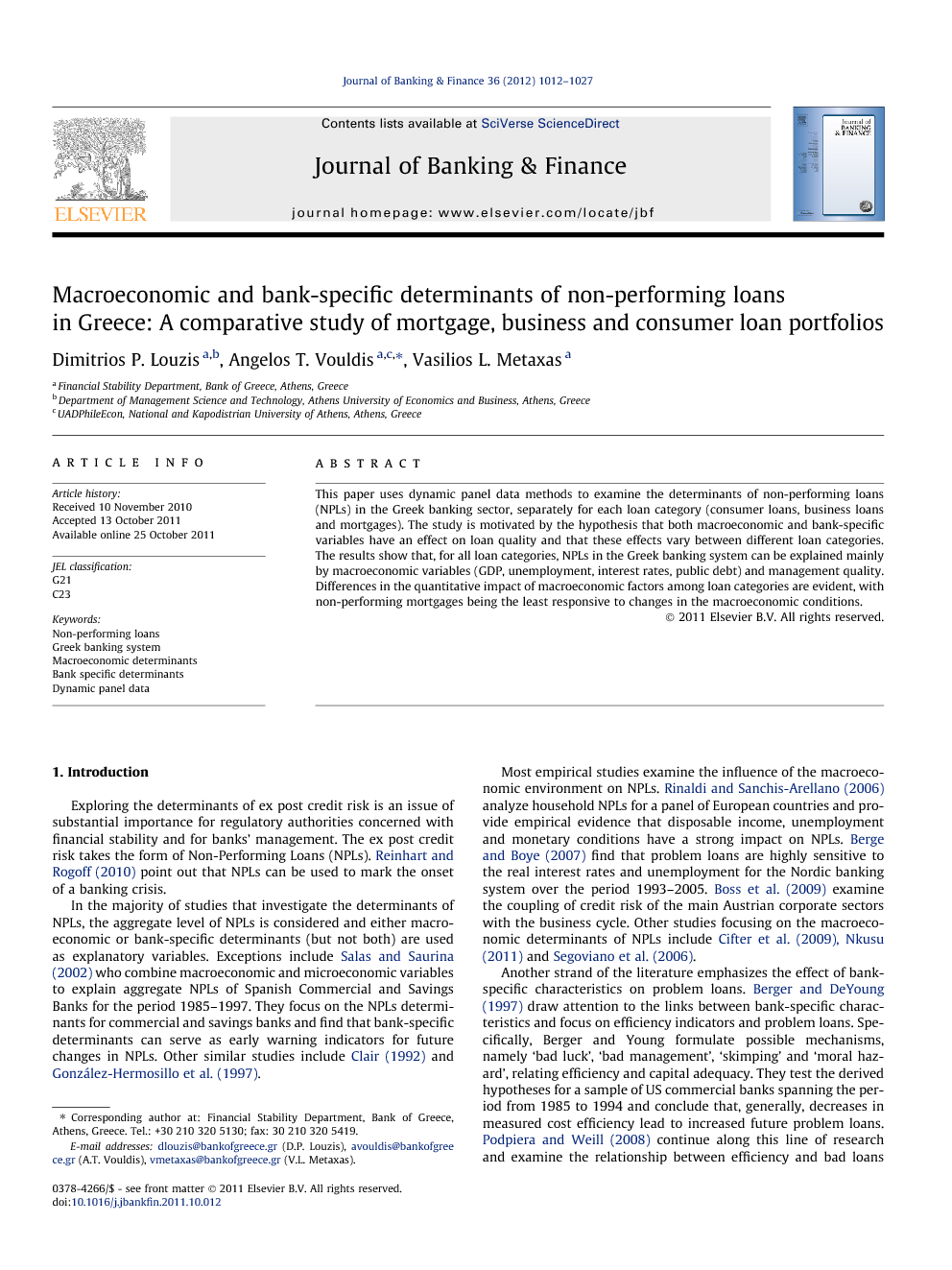 This paper uses dynamic panel data methods to examine the determinants of non-performing loans (NPLs) in the Greek banking sector, separately for each loan category (consumer loans, business loans and mortgages). The study is motivated by the hypothesis that both macroeconomic and bank-specific variables have an effect on loan quality and that these effects vary between different loan categories. The results show that, for all loan categories, NPLs in the Greek banking system can be explained mainly by macroeconomic variables (GDP, unemployment, interest rates, public debt) and management quality. Differences in the quantitative impact of macroeconomic factors among loan categories are evident, with non-performing mortgages being the least responsive to changes in the macroeconomic conditions.

Exploring the determinants of ex post credit risk is an issue of substantial importance for regulatory authorities concerned with financial stability and for banks’ management. The ex post credit risk takes the form of Non-Performing Loans (NPLs). Reinhart and Rogoff (2010) point out that NPLs can be used to mark the onset of a banking crisis. In the majority of studies that investigate the determinants of NPLs, the aggregate level of NPLs is considered and either macroeconomic or bank-specific determinants (but not both) are used as explanatory variables. Exceptions include Salas and Saurina (2002) who combine macroeconomic and microeconomic variables to explain aggregate NPLs of Spanish Commercial and Savings Banks for the period 1985–1997. They focus on the NPLs determinants for commercial and savings banks and find that bank-specific determinants can serve as early warning indicators for future changes in NPLs. Other similar studies include Clair (1992) and González-Hermosillo et al. (1997). Most empirical studies examine the influence of the macroeconomic environment on NPLs. Rinaldi and Sanchis-Arellano (2006) analyze household NPLs for a panel of European countries and provide empirical evidence that disposable income, unemployment and monetary conditions have a strong impact on NPLs. Berge and Boye (2007) find that problem loans are highly sensitive to the real interest rates and unemployment for the Nordic banking system over the period 1993–2005. Boss et al. (2009) examine the coupling of credit risk of the main Austrian corporate sectors with the business cycle. Other studies focusing on the macroeconomic determinants of NPLs include Cifter et al., 2009 and Nkusu, 2011 and Segoviano et al. (2006). Another strand of the literature emphasizes the effect of bank-specific characteristics on problem loans. Berger and DeYoung (1997) draw attention to the links between bank-specific characteristics and focus on efficiency indicators and problem loans. Specifically, Berger and Young formulate possible mechanisms, namely ‘bad luck’, ‘bad management’, ‘skimping’ and ‘moral hazard’, relating efficiency and capital adequacy. They test the derived hypotheses for a sample of US commercial banks spanning the period from 1985 to 1994 and conclude that, generally, decreases in measured cost efficiency lead to increased future problem loans. Podpiera and Weill (2008) continue along this line of research and examine the relationship between efficiency and bad loans in the Czech banking industry from 1994 to 2005. They also provide empirical evidence in favor of a negative relationship between decreased cost efficiency and future NPLs. Both papers focus solely on bank-specific determinants. Li et al. (2007) finds that incentive contracts have a positive effect on managerial efforts to reduce NPLs in the Chinese banking system. Finally, Breuer (2006) examines the influence of a very wide range of institutional variables on NPLs. The present study aims to contribute to the NPLs literature in three ways. First, we examine the determinants of NPLs across different loan categories, rather than the aggregate level of NPLs. The majority of previous studies focuses on aggregate NPLs. This approach may obscure significant channels through which credit risk fluctuates.1 In particular, macroeconomic and bank-specific variables may impact each type of NPLs in a different way. This can be attributed to institutional settings creating different incentive structures for each loan type with regard to the costs of bankruptcy.2,3 Moreover, differences in the sensitivity of various NPLs categories to macroeconomic developments may be related to differential effects of the business cycle, especially economic downturns, on agents’ cash flows and collateralized assets’ values. Therefore, we distinguish between consumer, business and mortgage loans and investigate separately their corresponding determinants. Second, the paper focuses on the Greek banking system, which due to the recent economic developments in Greece, may serve as a benchmark for the study of the public debt and banking crisis nexus. Reinhart and Rogoff (2009), for instance, concentrate on the temporal direction from a banking crisis to a debt crisis, motivated by the financial turmoil in the US. The case of Greece, however, provides an example of a fragile public finance condition leading to a deterioration of the NPLs. In this paper we investigate the effect of the sovereign debt on the banking system through the NPLs. Finally, the paper considers two distinct types of determinants, namely macroeconomic (systematic) and bank-specific (idiosyncratic). Our aim is to identify the most significant bank-specific determinants, after controlling for the macroeconomic environment. The methodology is to estimate a baseline model, which includes only general macroeconomic indicators and then examine if the addition of bank-specific variables contributes to the explanatory power of the model. The choice of the bank-specific variables is based on hypotheses which have been put forward in the literature. Under the assumption that the macroeconomic situation and the business cycle constitute fundamental determinants of NPLs for all types of loans, this approach enables us to isolate the bank-specific features, which have an impact on NPLs per type of loan. There is no standardized approach to analyze the factors influencing NPLs in the literature. Data availability represents a major limitation, constraining to a large extent the methodological options available. This paper utilizes a panel data set comprising nine Greek commercial banks spanning from the first quarter of 2003 to the third quarter of 2009 and a loan portfolio broken down into mortgage, business and consumer loans. Our results are intuitively expected but have not been documented before. For example, empirical evidence is provided that macroeconomic and bank-specific variables should be combined when modeling the NPLs evolution and we show that there exist both qualitative and quantitative differences among the effects of these variables on the various NPL categories. The rest of the paper is organized as follows. Section 2 briefly presents the evolution of NPLs in the Greek banking system. Section 3 provides an overview of the theoretical and empirical literature on the determinants of problem loans and formulates the hypotheses relating bank-specific variables to NPLs. Section 4 describes the econometric methodology, while Section 5 presents the results of the empirical analysis. Finally, Section 6 summarizes our findings.

In this study we use dynamic panel data methods to examine the determinants of NPLs in the Greek banking sector. We find that macroeconomic variables, specifically the real GDP growth rate, the unemployment rate, the lending rates and public debt have a strong effect on the level of NPLs. Moreover, bank-specific variables such as performance and efficiency possess additional explanatory power when added into the baseline model thus lending support to the ‘bad management’ hypothesis linking these indicators to the quality of management. Furthermore, evidence for the existence of a TBTF effect is found for mortgage and business loans up to a size level. In addition, the empirical results indicate that the quantitative effects of the various NPLs’ determinants depend on the category of loans. Particularly, consumer loans are the most sensitive to changes in the lending rates and business loans to the real GDP growth rate, while mortgages are the least affected by macroeconomic developments. Our findings have several implications in terms of regulation and policy. Specifically, there is evidence that performance and inefficiency measures may serve as leading indicators for future problem loans. This suggests that regulatory authorities should focus on managerial performance in order to detect banks with potential NPLs increases. Moreover, regulators should place emphasis on risk management systems and procedures followed by banks in order to avert future financial instability. In addition, the aforementioned relations can be used for forecasting and stress testing purposes for both regulators and banks (Melecky and Podpiera, 2010). In a macro-stress testing exercise, alternative scenarios for the evolution of the macro-variables can be used in order to evaluate the adequacy of loan loss provisions in the banking system. On the other hand, similar exercises could be performed on a bank specific level in order to assess future problems that may ensue in particular banks characterized by relatively low indices of performance and efficiency. Given that the analysis has been conducted in a disaggregated basis, stress testing exercises may focus on different types of loan portfolios enhancing the reliability of the results. The study can be extended in various ways. In the first place, a “vintage” loan analysis may be used to pinpoint any differences in the quality of loans granted during the cycle. Such a type of analysis would be directly linked to the hypothesis of a change in the risk attitude of banks between the phases of the cycle. Moreover, further investigation of the crisis effects would be worthy of study. It may be conjectured that the financial crisis represents a structural break affecting the interrelations between non-performing loans and their determinant factors.