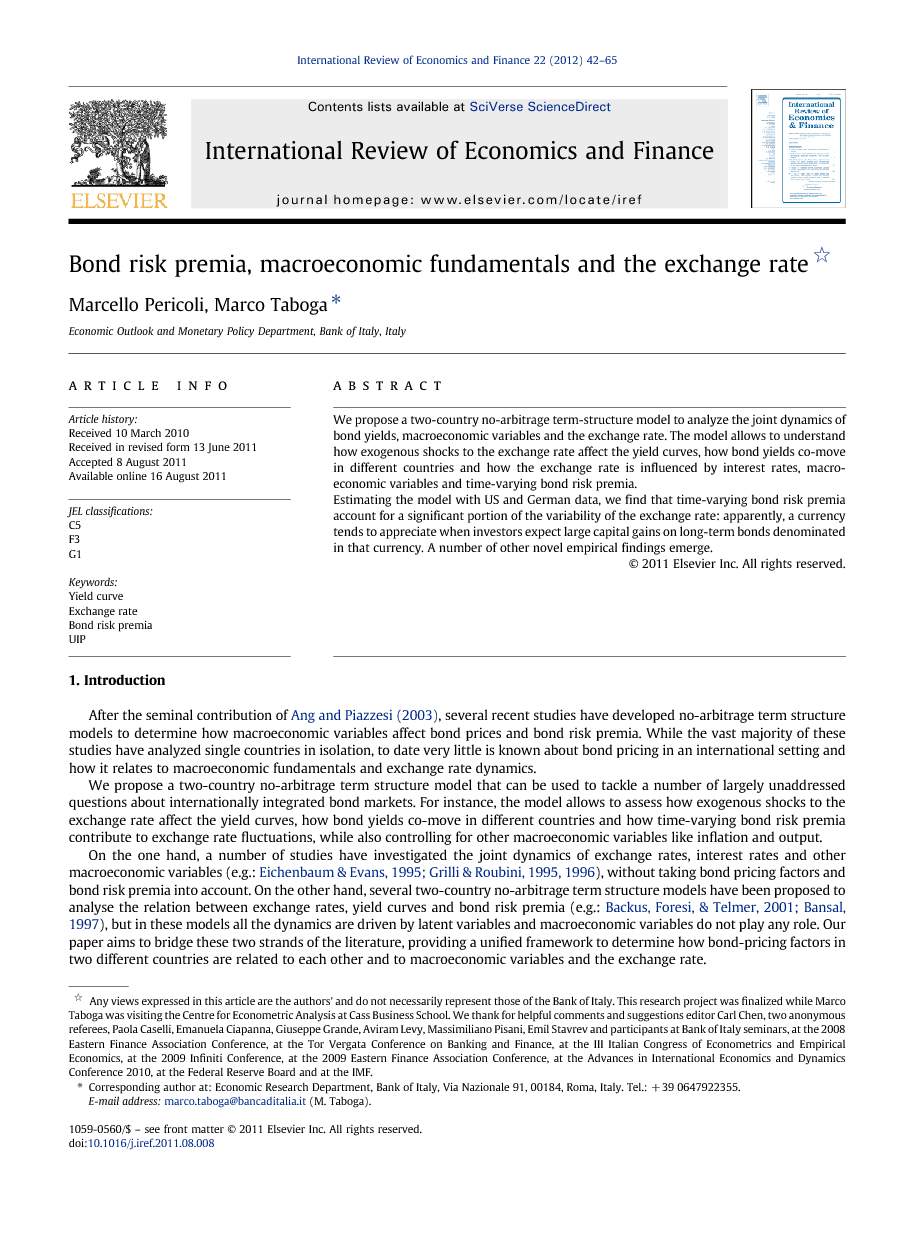 We propose a two-country no-arbitrage term-structure model to analyze the joint dynamics of bond yields, macroeconomic variables and the exchange rate. The model allows to understand how exogenous shocks to the exchange rate affect the yield curves, how bond yields co-move in different countries and how the exchange rate is influenced by interest rates, macro-economic variables and time-varying bond risk premia. Estimating the model with US and German data, we find that time-varying bond risk premia account for a significant portion of the variability of the exchange rate: apparently, a currency tends to appreciate when investors expect large capital gains on long-term bonds denominated in that currency. A number of other novel empirical findings emerge.

We have proposed a no-arbitrage term structure model that allows to contemporaneously price bonds in two different countries, taking into account the dynamics of the exchange rate and of observable macroeconomic variables such as inflation and the output gap. In the model, the domestic pricing kernel and the exchange rate are specified exogenously and the foreign pricing kernel is derived endogenously. Thanks to this specification strategy, the model affords a considerable analytical tractability and allows to analyse bidirectional linkages between bond prices and the exchange rate. Estimating the model with US and German data over various sample periods, we have found that a significant portion of the variability of the exchange rate is accounted for by time-varying bond risk premia (more than 20% over long time horizons). We have analyzed the dynamics of the estimated model to seek explanations for this finding. Impulse response analysis reveals that a currency tends to persistently appreciate when risk premia on long-term bonds denominated in that currency rise, that is when investors expect large capital gains on long-term bonds denominated in that currency. The delayed overshooting phenomenon found by many previous studies with reference to short-term policy rates seems to extend also to expected returns on long-term bonds. Furthermore, differences in bond risk premia between countries drive deviations from uncovered interest rate parity: the higher is the difference between bond risk premia in two countries, the more profitable is a carry-trade strategy based on such difference. After controlling for macroeconomic variables, bond risk premia in one country have fairly limited influence on those of another country. Finally, exogenous shocks to the exchange rate have a negligible impact on the yield curves. While the econometric specification and the estimation techniques we have proposed allow to efficiently tackle the high dimensionality and the computational complexity of a two-country no-arbitrage model, we have constrained ourselves to a Gaussian and linear setting. Since there is abundant evidence of non-linearities both in exchange rate dynamics (e.g.: Mark and Moh, 2005 and Nirei and Sushko, 2011) and in interest rate pricing (Ahn, Dittmar, & Gallant, 2002), it could be interesting to explore how the model could be improved to take this empirical evidence into account. For example, one could relax the linearity assumption and allow for quadratic terms in the pricing equations, along the lines suggested by Ahn et al., 2002 and Diez de los Rios, 2009. We leave these kind of extensions for future research.