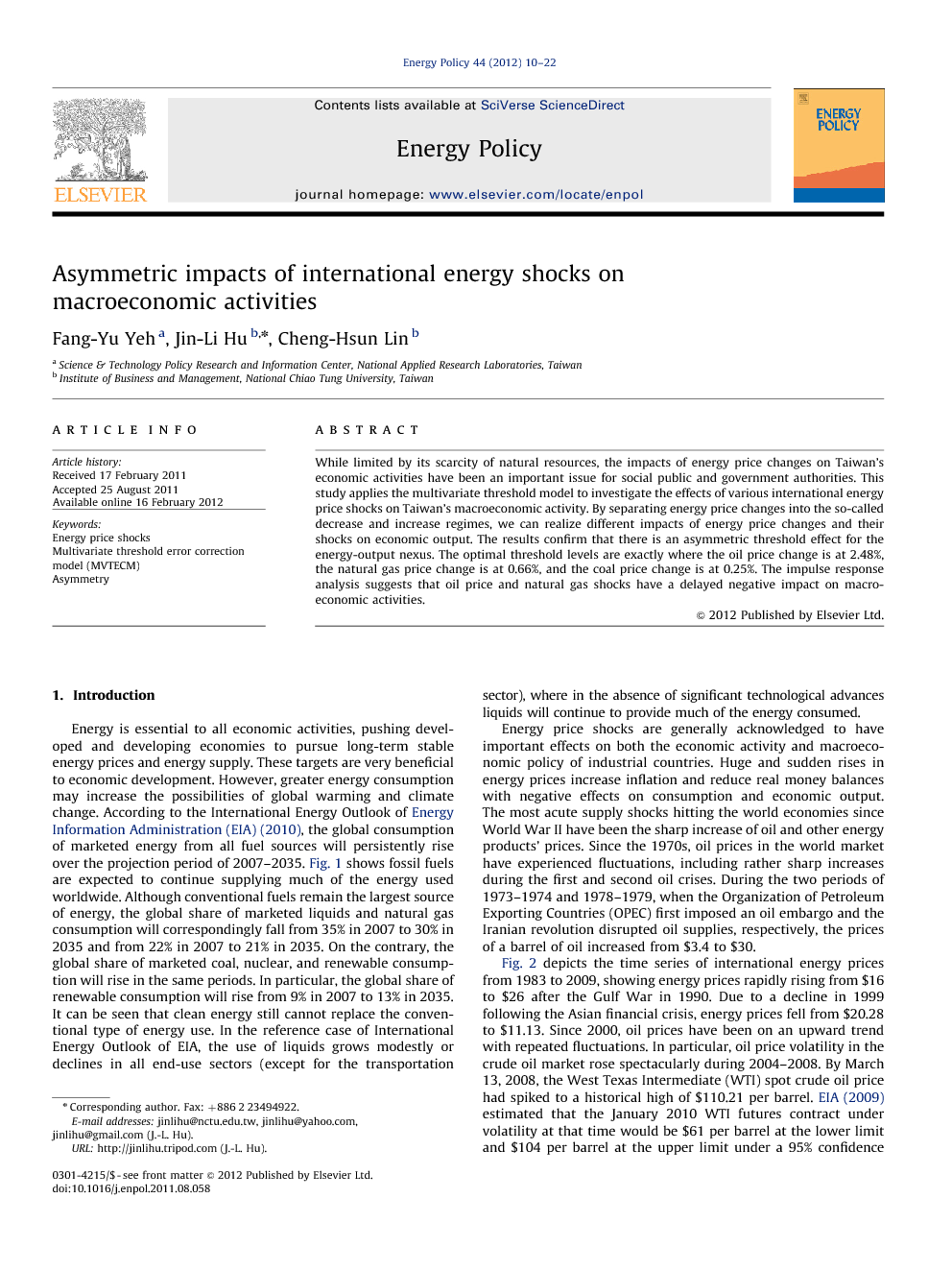 Following the 2003 Iraq War and from the increased oil demand from developing countries, Asian countries have been filled with tension and uncertainty after oil prices began to rise again in early 2004. As oil prices have increased, we refocus attention to the issue of energy price change and its impact on economic activities. Even though there are some related studies of the use of an asymmetric relation to examine the impact of an oil price change on an economy, research studies do not consider the speed of oil price adjustment before estimation and also neglect the impact from oil price shocks. To overcome the weakness of prior studies, we apply the multivariate threshold VAR model proposed by Tsay (1998), whereby the threshold value determined by the dataset delineates the sample instead of using the arbitrary zero as a cutoff point. We explore the speed of response (delay periods d) and the degree of critical level (threshold value c) as a consequence of the impact of a positive energy price change and its shock. The results confirm that there exists a threshold non-linearity relationship between energy prices and macroeconomic variables. The optimal threshold levels are 2.48% in terms of oil price change, 0.66% in terms of natural gas price change, and 0.25% in terms of coal price change. Due to Taiwan's high economic development, the threshold of the critical level is greater as evidenced by the positive impact of an oil price change and its shock. The optimal threshold value seems to vary according to how an economy depends on imported energy and the attitude towards accepting energy-saving technologies. If a country has a higher energy import ratio and acquires a higher ratio of energy use in the industrial sector, then it will have a shorter delay in terms of its economic response from the positive impact of an energy price change. As our results indicate, the delay from the threshold variable is only one month for an oil price change, while coal and natural gas price changes both incur two months. Compared to other energy price changes (i.e., coal price and natural gas price), oil price changes have the largest explanatory effect on Taiwan's industrial production. Moreover, such changes better explain industrial production than the real interest rate when oil price changes exceed the threshold value (regime two). For Taiwan's labor market, international energy price shocks have a positive effect on the unemployment rate in the short term, implying that an increase in energy prices will increase the cost of production which in turn results in a higher level of unemployment. Policy implications derived from this study need to be clarified. In order to design an applicable energy price policy, we need to consider the asymmetric relationships between energy prices and the macroeconomy. In particular, we have to capture a degree of economic tolerance zone that protects the economy from the impact of an international price change and its shock. It is evident that oil prices have the largest threshold level of economic tolerance among the major international energy prices for Taiwan. By inspecting the pattern of energy consumption in the industrial sector, we can explain this phenomenon. In the energy balance sheet published by the Bureau of Energy, the overall proportion of coal consumption in the industrial sector is 0.88, while the overall ratio is 0.74 for imported liquid natural gas, and 0.53 for crude oil and petroleum products. Higher coal and natural gas prices will directly increase production and operating costs. Therefore, firms are more sensitive to the energy price fluctuations. They merely are able to prevent minor price increases from harming their economic benefits. Based on our evidence, when an international energy price change exceeds an estimated optimal threshold level, energy price shocks will have a significant effect on industrial production. To cope with the situation, government authorities should adopt tariff reductions, subsidies, and adjust domestic energy prices at different times. These measures may reduce any impacts directly from international energy price fluctuations. Even though we have found possible factors to explain Taiwan's macroeconomic fluctuations and the speed of adjustment from the impact of energy price shocks, there are still some limitations to this research, including a host of possible exogenous factors that may affect macroeconomic variables and delay of the effect such as the degree of openness of the economy and fiscal and exchange rate policies (e.g., Bohi, 1991). These omitted variables may be included in future analyses for testing the robustness of the result. In addition, international energy price changes may impact open economies both directly and indirectly. Future research studies can identify these direct and indirect channels of oil price shocks on the labor market.