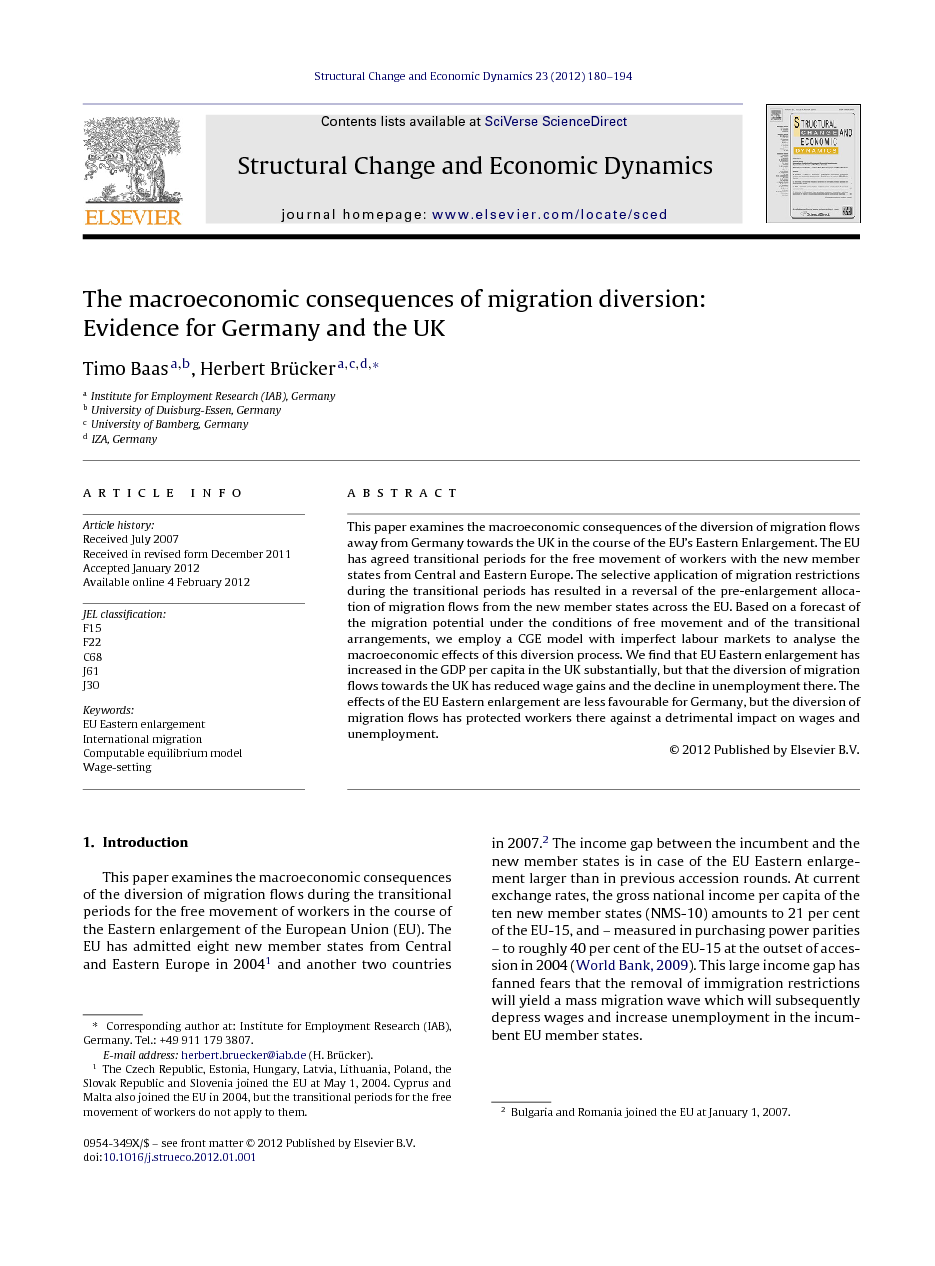 This paper examines the macroeconomic consequences of the diversion of migration flows during the transitional periods for the free movement of workers in the course of the Eastern enlargement of the European Union (EU). The EU has admitted eight new member states from Central and Eastern Europe in 20041 and another two countries in 2007.2 The income gap between the incumbent and the new member states is in case of the EU Eastern enlargement larger than in previous accession rounds. At current exchange rates, the gross national income per capita of the ten new member states (NMS-10) amounts to 21 per cent of the EU-15, and – measured in purchasing power parities – to roughly 40 per cent of the EU-15 at the outset of accession in 2004 (World Bank, 2009). This large income gap has fanned fears that the removal of immigration restrictions will yield a mass migration wave which will subsequently depress wages and increase unemployment in the incumbent EU member states. Against this background the EU-15 countries decided at the Goeteborg summit of the European Council to impose transitional periods for the free movement of workers from the NMS. The so-called “2+3+2” formula allows the individual member states to suspend the free movement of workers for a period of up to seven years. An extension of the transitional arrangements for the free movement of labour is first considered after two years, then for a second time after three years. A second prolongation of the transitional period requires that the member state announces serious imbalances in its domestic labour market. However, the application of transitional arrangements for the free movement remains a sovereign decision of the individual member state. In the course of the 2004 enlargement round, only Sweden applied fully the Community Law for the free movement of workers since the beginning, and the UK and Ireland opened their labour markets without restrictions. Although most other EU member states have opened their labour markets partially by granting work permits for seasonal workers, (small) immigration quotas or by concluding bilateral guestworker agreements, the remaining migration restrictions can be regarded as relatively tight in the sense that they effectively hindered labour migration between the new and the incumbent member states.3 The selective application of migration restrictions during the transitional periods had two effects: First, the existing restrictions have hindered migration such that total migration into the EU is presumably lower than in case of an EU-wide application of the Community Law for the free movement of workers. Second, migration flows have been diverted away from the preferred destinations towards countries which have opened their labour markets immediately after the EU Eastern enlargement. Table 1 presents the migration development in the course of the EU Eastern enlargement. Migration data are poorly reported in most EU member states, such that some uncertainty surrounds the estimates of the actual scale of east-west migration.4 Based on the information of those countries which provide migration figures by country of origin and on the information of the European Labour Force Survey (LFS) for those countries which do not, we can estimate the net increase in the number of foreign residents from the NMS-8 in the EU-15 at about one million people or about 250,000 persons per annum during the first four years following the EU's Eastern enlargement.5 First data suggest that migration flows from the NMS-8 into the EU-15 have contracted in the course of the financial crisis, but EU wide data which would provide a comprehensive picture are not yet available

This increase in the migration flows is associated with a distinct diversion of migration flows away from Germany and Austria as the main destinations prior to Enlargement towards the UK and Ireland: In 2003, the year before the EU's Eastern enlargement, nearly 60 per cent of the foreign citizens from the NMS-8 residing in the EU were registered in Austria and Germany. This share has fallen to 41 per cent in 2007, while that of the UK and Ireland has increased to 52 per cent. At a net increase of the foreign population of 166,000 persons per annum in the first four years following the EU Eastern enlargement, the UK and Ireland receive 70 per cent of the net inflows since 2004 compared to 18 per cent before enlargement. In contrast, Austria and Germany receive only 18 per cent of the inflows since 2004.6 Interestingly enough, this diversion process did not affect the Scandinavian countries: although Sweden has opened its labour market completely and Denmark largely, the cumulative net migration flows into these two countries have been – at some 34,000 persons – almost negligible in the first four years since enlargement. Language, and, perhaps, differences in labour market institutions, might have also played an important role in shaping the direction of east-west migration flows (Ivlevs, 2007). In this paper we analyse the macroeconomic effects of this diversion process for the two economies which are mainly affected in absolute terms, Germany and the UK. We apply different policy scenarios for identifying the macroeconomic effects of migration diversion. The first policy scenario simulates the case that the status quo regarding the immigration conditions is maintained until the end of the transitional periods in 2011, i.e. that Germany has a restrictive immigration policy in place while the UK keeps the doors for labour migration from the eight new member states from Central and Eastern Europe (NMS-8) open. The second policy scenario relies on the counterfactual assumption that both Germany and the UK have opened their labour markets for migrants from the NMS-8 already in 2004, which implies that Germany receives more and the UK less migrants. The comparison of these two scenarios enables us to analyse the effects of the diversion of migration flows from Germany to the UK. The migration scenarios are based on forecasts of the migration potential from the NMS-8. We proceed in two steps to derive our scenarios. First, we estimate the aggregate migration potential from the NMS-8 into the entire EU-15 under the conditions of free movement and of the transitional arrangements, using the recent migration episode from the NMS and the migration experience from other countries for identification. Second, we derive the migration scenarios for Germany and the UK from reasonable assumptions about the allocation of migrants between the EU member states under free movement and the transitional arrangements. Our macroeconomic analysis employs a computable general equilibrium (CGE) model, which allows simulating the impacts of migration, trade and capital movements simultaneously. Following Layard et al. (2005) and Layard and Nickell (1986), we employ a wage-setting framework which considers wage rigidities and unemployment. Considering imperfect labour markets is in our view particularly relevant in the European context with high and persistent unemployment rates. We find that the removal of barriers to trade and factor movements in the context of the EU Eastern enlargement generates benefits for Germany and the UK in terms of a higher GDP per capita and a higher factor income of the native population. The labour market results of our model are similar to findings of Barrell et al. (2007) who use a dynamic new-Keynesian macroeconometric model to analyse the effects of a migration shock following EU-enlargement. Higher migration involves higher aggregate GDP and employment levels in the receiving country, but reduces the wage increase and has a detrimental impact on unemployment compared to situation with less migration. The diversion of migration flows away from Germany towards the UK yields thus a higher GDP, employment growth and total factor income of the native population in the UK and a lower one in Germany, while Germany benefits slightly in terms of higher wages and lower unemployment compared to the UK. The remainder of this paper is organised as follows. Section 2 presents our estimate of the EU-wide migration potential from the NMS-8 under the conditions of the transitional arrangements and of free movement of workers and the migration scenarios for Germany and the UK which forms the basis for our further analysis. Section 3 discusses the methodology and theoretical foundations of the CGE model. Section 4 presents the results of our simulations under the transitional arrangements and under the counterfactual assumption of an EU-wide application of the Community laws for the free movement of labour already in 2004. Section 5 concludes.