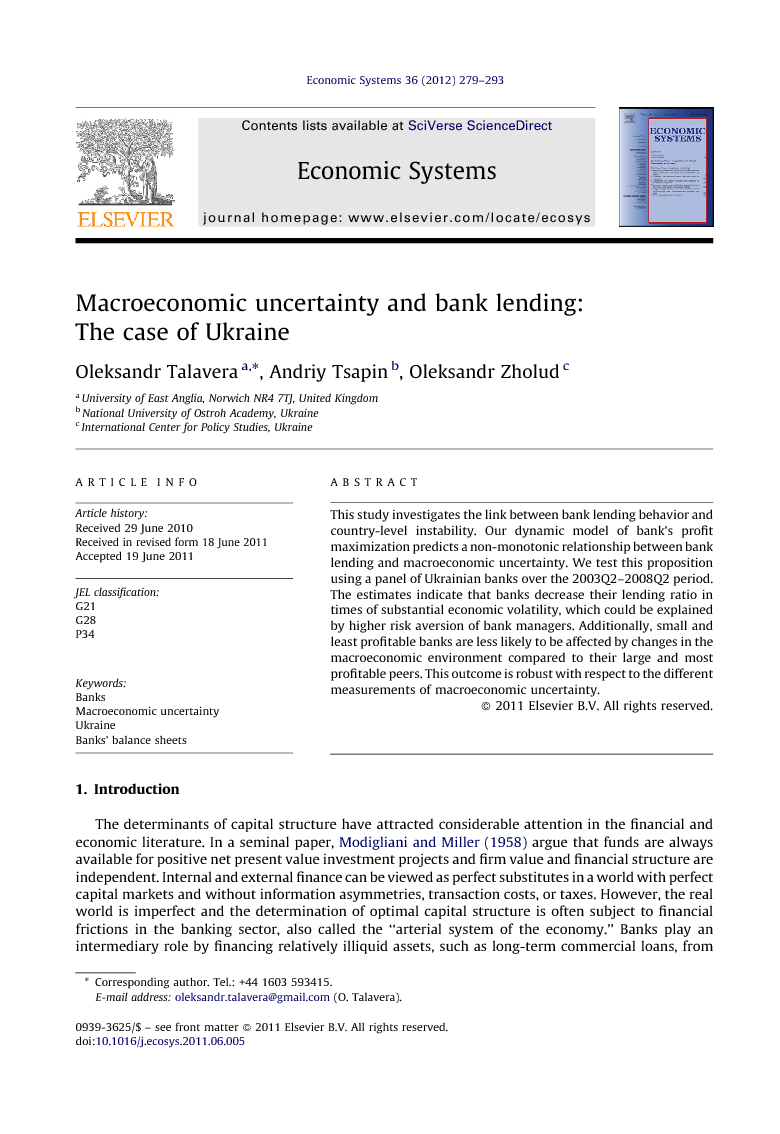 This study investigates the link between bank lending behavior and country-level instability. Our dynamic model of bank's profit maximization predicts a non-monotonic relationship between bank lending and macroeconomic uncertainty. We test this proposition using a panel of Ukrainian banks over the 2003Q2–2008Q2 period. The estimates indicate that banks decrease their lending ratio in times of substantial economic volatility, which could be explained by higher risk aversion of bank managers. Additionally, small and least profitable banks are less likely to be affected by changes in the macroeconomic environment compared to their large and most profitable peers. This outcome is robust with respect to the different measurements of macroeconomic uncertainty.

The determinants of capital structure have attracted considerable attention in the financial and economic literature. In a seminal paper, Modigliani and Miller (1958) argue that funds are always available for positive net present value investment projects and firm value and financial structure are independent. Internal and external finance can be viewed as perfect substitutes in a world with perfect capital markets and without information asymmetries, transaction costs, or taxes. However, the real world is imperfect and the determination of optimal capital structure is often subject to financial frictions in the banking sector, also called the “arterial system of the economy.” Banks play an intermediary role by financing relatively illiquid assets, such as long-term commercial loans, from more liquid liabilities, such as short-term deposits. Hence, the availability of bank loans may have important effects on fixed capital investment, and, consequently, on economic growth (Rousseau and Yilmazkuday, 2009). The level of uncertainty about inflation or money growth has a direct impact on the risk in financial markets (Krkoska and Teksoz, 2009) and the banking system in particular. Naturally, there is an emerging body of theoretical and empirical literature focused on banks’ behavior under a constantly changing macroeconomic environment. This research is motivated by the fact that changes in macroeconomic uncertainty, partially influenced by monetary policy, affect firms’ costs of obtaining external finance and their investment dynamics. In this paper, we explore the relationship between supply of financing and the variations in the macroeconomic environment. Specifically, we ask whether banks change their lending behavior in response to changes in macroeconomic uncertainty. Several papers have analyzed the interaction between the macroeconomic environment and bank asset management. Jimborean (2009) investigates the effects of monetary policy on bank lending channels for 10 Central and Eastern European countries. The author finds evidence of functioning bank lending channels, but only through small banks. Stein (1998) develops a model of bank asset and liability management and concludes that monetary policy affects bond-market interest rates only because of imperfections in the banking sector. Kashyap and Stein (2000) show that the impact of monetary policy on bank lending behavior is particularly strong for small American firms with less liquid balance sheets. Among other macroeconomic environment factors, uncertainty is a substantial factor affecting bank capital structure. Baum et al. (2003) suggest that macroeconomic uncertainty plays an important role in explaining banks’ lending decisions. They find that growth of total loans has a positive relationship with uncertainty proxies. Besides growth of loans a number of papers investigate whether “second moments matter” by considering the relationship between the variance of lending and macroeconomic uncertainty ( Baum et al., 2009 and Calmés and Salazar, 2006). It is found that when macroeconomic uncertainty increases, the cross-sectional volatility decreases, which suggests a herding behavior in the banking industry. Quagliariello (2009) also finds that not only aggregate shocks but also idiosyncratice shocks lead to herding. None of these papers addresses the issue examined here, namely the relationship between the asset structure of banks and macroeconomic volatility.1 Therefore, the contribution of our paper is twofold. First, we develop a theoretical framework that provides predictions about links between bank lending and macroeconomic uncertainty. Second, the model predictions are empirically tested by applying the GMM estimator on a panel of Ukrainian banks. Our work extends the theoretical models of Abel (1983) and Hahm (1996). According to our setup, bank managers choose optimal levels of labor and deposits from business agents to maximize the bank's value, equal to an expected present value of profit. The banks face convex costs of borrowing adjustment and are irresolute about the price on credit resources because of future demand shocks. The model predicts a non-monotonic relationship between bank lending and macroeconomic uncertainty. However, due to the specific features of underdeveloped financial markets (e.g. low interest elasticity of the demand for loans),2 we predict a negative effect of loan demand volatility on the lending decisions of banks. To test the model's predictions, we apply the System GMM estimator (Blundell and Bond, 1998) to a panel of Ukrainian banks over the 2003Q2–2008Q2 period. These data are hand-collected from the official monthly newsletter of the National Bank of Ukraine (NBU) ‘Visnyk NBU’, which provides in-depth information on the structure of banks’ assets, liabilities and capital. After screening procedures our data include 2777 quarterly bank observations. Since the impact of uncertainty may differ across categories of banks, we also consider splits of the sample on large and small banks as well as on most and least profitable banks. Our main empirical findings can be summarized as follows. We find strong evidence of a negative association between the optimal level of bank lending and six out of eight measures of macroeconomic uncertainty. This outcome could be explained by precautionary behavior of bank managers in more uncertain times. There are also differences in sensitivity of lending with respect to macroeconomic volatility among banks’ size and profitability subsamples. It is shown that small (least profitable) banks are notably less affected by uncertainty compared to larger (most profitable) counterparts. These results provide useful insights into financing fixed capital decisions. Inconstancy of the macroeconomic environment affects the supply of external financing, which influences firms’ investment decisions. Therefore, our estimates suggest that the transmission mechanism of monetary policy is much more complicated than formulated in standard models which ignore the interaction of bank asset structure and macroeconomic stability. The rest of this paper is organized as follows. The next section provides an overview of the Ukrainian banking sector. Section 3 presents the theoretical framework. Section 4 describes the data and illustrates econometric results. Finally, Section 5 concludes.

This paper investigates the link between commercial banks’ lending and macroeconomic uncertainty. Managers maximize the bank value, equal to a discounted stream of bank's profits. Based on theoretical predictions, we claim that higher uncertainty can lead to lower lending in emerging market economies. The empirical predictions of this model on the sample of Ukrainian banks are examined. Using eight alternative measures of macroeconomic uncertainty, we find out that banks decrease their supply of loans when the volatility of macroeconomic variables increases. Consistent with the value-maximizing model, we receive significant evidence that banks extend credit supply when macroeconomic uncertainty decreases. This effect remains after controlling for size, profitability, and capital. Moreover, there is a distinct sensitivity of contrasted groups of banks with respect to different proxies for macroeconomic volatility. The result is achieved for subsamples based on size and profitability of banks. We believe that this evidence sheds light on three sets of questions. First, our unique dataset allows us to investigate the effects of macroeconomic uncertainty on banks’ lending in a country with an underdeveloped financial sector. The estimated effects of macroeconomic uncertainty negatively influence bank lending, which is also consistent with the predictions from the dynamic model of bank value maximization in case of inelastic demand for credits. Moreover, some macroeconomic uncertainty proxies have marginal or no impact on some groups of banks. Second, our results contribute to the existing literature of a bank lending channel for monetary policy.16 Banks affect bank-dependent borrowers’ ability to finance their investment projects through this channel. There is substantial evidence for the effects of monetary policy on banks’ balance sheets (Kashyap and Stein, 1995). When a bank's financial situation reflects the borrowers’ financial statement or switching costs are small, the effects of a bank lending channel on monetary policy is minimal (Hubbard et al., 2002). Third, if there is a negative effect of macroeconomic uncertainty on bank's lending behavior, one can find out how the riskiness of the whole system changes. This should allow for better bank supervision, thus minimizing the effect of external shocks. Our research has important policy implications. According to Nier and Zicchino (2005), a decrease in loan supply may reduce aggregate investment, therefore amplifying macroeconomic fluctuations. These consequences are not confined to particular countries and particular times. When banks curtail their lending, companies are unable to obtain funds and may be forced to default on their obligations. Moreover, as shown by Dell et al. (2005), scarcity of funds may lead to early liquidation of long-term investments, which affects the long-term growth trend as well. This research is the first attempt to study and test the effect of changes in macroeconomic uncertainty on bank lending in an emerging market country. The results of this investigation cannot be considered a definitive answer to what is the appropriate policy for the NBU or other state agencies that supervise the financial sector, except to convey the general notion that they have to decrease the level of macroeconomic uncertainty whenever possible. While taking a look at the sensitivity of bank lending to macroeconomic uncertainty, some unexplored topics are left for future exploration if available data permit. Among the most interesting parts is the investigation of herding behavior of banks. Researchers could check what happens with cross-sectional distribution of bank-lending ratios when macroeconomic uncertainty increases.