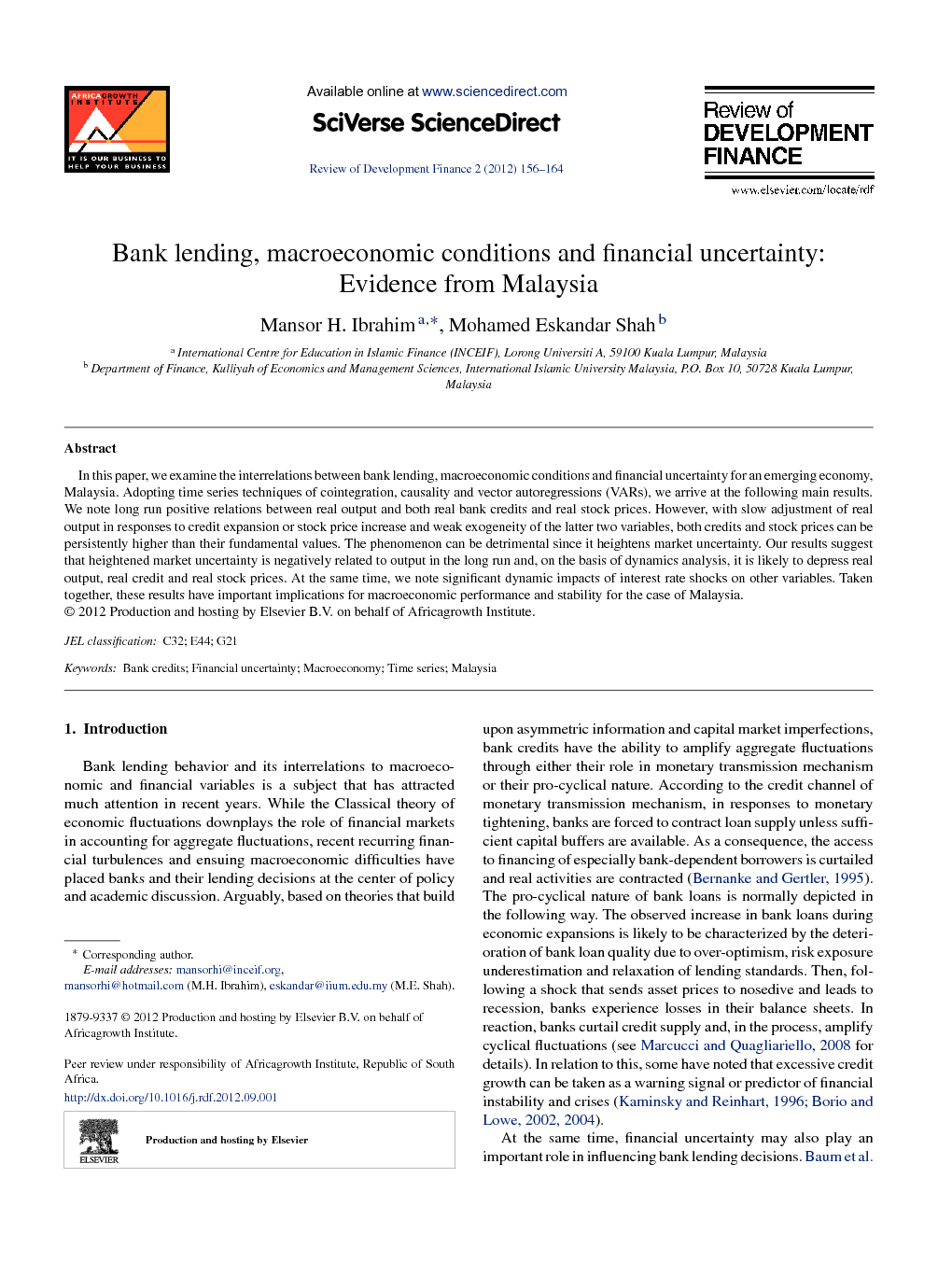 In this paper, we examine the interrelations between bank lending, macroeconomic conditions and financial uncertainty for an emerging economy, Malaysia. Adopting time series techniques of cointegration, causality and vector autoregressions (VARs), we arrive at the following main results. We note long run positive relations between real output and both real bank credits and real stock prices. However, with slow adjustment of real output in responses to credit expansion or stock price increase and weak exogeneity of the latter two variables, both credits and stock prices can be persistently higher than their fundamental values. The phenomenon can be detrimental since it heightens market uncertainty. Our results suggest that heightened market uncertainty is negatively related to output in the long run and, on the basis of dynamics analysis, it is likely to depress real output, real credit and real stock prices. At the same time, we note significant dynamic impacts of interest rate shocks on other variables. Taken together, these results have important implications for macroeconomic performance and stability for the case of Malaysia.

Bank lending behavior and its interrelations to macroeconomic and financial variables is a subject that has attracted much attention in recent years. While the Classical theory of economic fluctuations downplays the role of financial markets in accounting for aggregate fluctuations, recent recurring financial turbulences and ensuing macroeconomic difficulties have placed banks and their lending decisions at the center of policy and academic discussion. Arguably, based on theories that build upon asymmetric information and capital market imperfections, bank credits have the ability to amplify aggregate fluctuations through either their role in monetary transmission mechanism or their pro-cyclical nature. According to the credit channel of monetary transmission mechanism, in responses to monetary tightening, banks are forced to contract loan supply unless sufficient capital buffers are available. As a consequence, the access to financing of especially bank-dependent borrowers is curtailed and real activities are contracted (Bernanke and Gertler, 1995). The pro-cyclical nature of bank loans is normally depicted in the following way. The observed increase in bank loans during economic expansions is likely to be characterized by the deterioration of bank loan quality due to over-optimism, risk exposure underestimation and relaxation of lending standards. Then, following a shock that sends asset prices to nosedive and leads to recession, banks experience losses in their balance sheets. In reaction, banks curtail credit supply and, in the process, amplify cyclical fluctuations (see Marcucci and Quagliariello, 2008 for details). In relation to this, some have noted that excessive credit growth can be taken as a warning signal or predictor of financial instability and crises (Kaminsky and Reinhart, 1996, Borio and Lowe, 2002 and Borio and Lowe, 2004). At the same time, financial uncertainty may also play an important role in influencing bank lending decisions. Baum et al. (2005) frame bank decisions of asset allocation to loans and bonds based on a portfolio balance model, in the same vein as nonfinancial firms’ investment decisions (Beaudry et al., 2001). In determining the optimal portfolio, banks assess the signals on expected returns of investments and, accordingly, their lending decisions. Macroeconomic uncertainty, by making the signals to be noisier, prompts banks to reallocate their assets away from risky loans toward safer bonds. Using the mean–variance optimization framework, Baum et al. (2005) demonstrate that cross-sectional variance of the loan-to-asset ratio declines following the increase in uncertainty. In other words, the optimal share of loans in the asset portfolio is distorted as a result of increasing uncertainty (see also Quagliariello, 2009). If this is the case, bank loans can be viewed to play an important role in transmitting financial shocks and uncertainty to the real sector. In the context of Asian crisis-hit countries, the eruption of the crisis and its consequences has been related in great extent to bank credits. The leading years to the Asian crisis had been pictured by excessive credit growth at the rates far higher than the growth rates of GDP (Corsetti et al., 1998, Goldstein, 1998 and Kamin, 1999). With the problem of asymmetric information coupled with lack of managerial expertise in risk management and inadequacy of regulatory framework, the excessive growth of credits resulted in substantial loan losses and deterioration of banks’ balance sheets (Mishkin, 1999). Kwack (2000) notes that the non-performing loan rates, which was surmounting during the period, is a major determinant of the Asian crisis. In her description of the Asian crisis, Athukorala (2001) places banks as a key channel through which exchange rate and stock market collapses are transmitted to the real sector. Apart from these, the Asian crisis seems to have a lasting impact on private investment activities, which have remained low since then. Indeed, the slumps in investment activities after the crisis have prompted various empirical works attempting to identify their determinants, among which include Kinkyo (2007), Jongwanich and Kohpaiboon (2008), Ang (2010) and Ibrahim (2011). Jongwanich and Kohpaiboon (2008), in particular, identify the shortages of capital as a prime determinant of investment slumps in Thailand. These studies also note the significant role played by macroeconomic and financial uncertainties. In light of these, this paper analyses the interrelations between bank lending, macroeconomic conditions and financial shocks and uncertainty for Malaysia. Being a bank-based system, Malaysia has witnessed the important role of bank credits in driving firms’ activities and, accordingly macroeconomic performance. According to a survey conducted in Malaysia by Bank Negara Malaysia (i.e. Malaysia's Central Bank) among 206 manufacturing companies in 1996, roughly 67% of them depend on bank loans for their working capital and 44% for their export activities (Public Bank, 1998). Then, excessive expansion of bank credits prior to the 1997/1998 Asian crisis and their drastic drop during the course of the crisis has normally been noted to be a key reason underlying amplified aggregate downturns observed in 1998 (Athukorala, 2001). While efforts have been made by the government to promote a market-based system through the development of financial markets, the banking system is likely to continue its dominant in Malaysia's financial scene. The shift by Bank Negara Malaysia from monetary aggregate targeting to interest rate targeting in mid 1990s and the restructuring of the banking system through mergers and increasing participation of foreign banks after the crisis hint on the acknowledged importance of bank credit. In short, the interrelations between bank credit and other macroeconomic variables in Malaysia is a subject that deserves attention. In the next section, we provide an overview of related literature. Then, Section 3 details the empirical approach used in the analysis. The measurement of financial uncertainty is also discussed in the same section. Section 4 describes the data and presents estimation results. Finally, Section 5 concludes with a summary of the main findings and some concluding remarks.