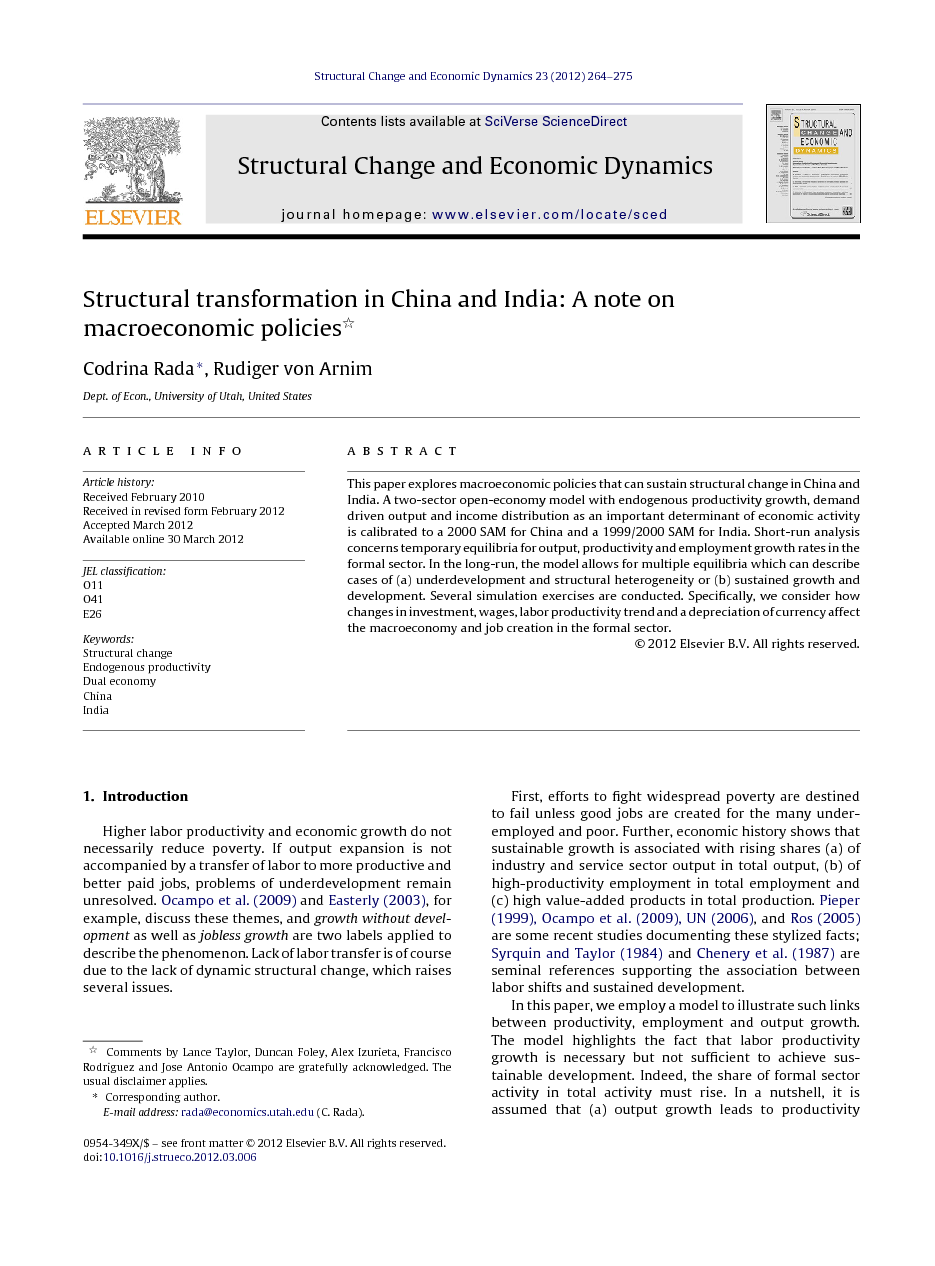 This paper explores macroeconomic policies that can sustain structural change in China and India. A two-sector open-economy model with endogenous productivity growth, demand driven output and income distribution as an important determinant of economic activity is calibrated to a 2000 SAM for China and a 1999/2000 SAM for India. Short-run analysis concerns temporary equilibria for output, productivity and employment growth rates in the formal sector. In the long-run, the model allows for multiple equilibria which can describe cases of (a) underdevelopment and structural heterogeneity or (b) sustained growth and development. Several simulation exercises are conducted. Specifically, we consider how changes in investment, wages, labor productivity trend and a depreciation of currency affect the macroeconomy and job creation in the formal sector.

Higher labor productivity and economic growth do not necessarily reduce poverty. If output expansion is not accompanied by a transfer of labor to more productive and better paid jobs, problems of underdevelopment remain unresolved. Ocampo et al. (2009) and Easterly (2003), for example, discuss these themes, and growth without development as well as jobless growth are two labels applied to describe the phenomenon. Lack of labor transfer is of course due to the lack of dynamic structural change, which raises several issues. First, efforts to fight widespread poverty are destined to fail unless good jobs are created for the many underemployed and poor. Further, economic history shows that sustainable growth is associated with rising shares (a) of industry and service sector output in total output, (b) of high-productivity employment in total employment and (c) high value-added products in total production. Pieper, 1999, Ocampo et al., 2009 and UN, 2006, and Ros (2005) are some recent studies documenting these stylized facts; Syrquin and Taylor (1984) and Chenery et al. (1987) are seminal references supporting the association between labor shifts and sustained development. In this paper, we employ a model to illustrate such links between productivity, employment and output growth. The model highlights the fact that labor productivity growth is necessary but not sufficient to achieve sustainable development. Indeed, the share of formal sector activity in total activity must rise. In a nutshell, it is assumed that (a) output growth leads to productivity growth through a Kaldor–Verdoorn channel and (b) productivity growth can lead to further demand growth, if labor transfer occurs. In such a ‘high road’ equilibrium, growth is accompanied by structural change, and cumulative causation sustains it. If output growth is too weak to lead to labor transfer, growth but no structural change occurs. This ‘low road’ equilibrium implies jobless growth, and perpetuates underemployment and poverty—it may lead to a ‘vicious circle of slowdown in productivity and economic growth, decline in investment, [and] increased structural heterogeneity as surplus manpower is absorbed into low-productivity activities’ (Ocampo, 2005, page 22). The model has previously been discussed in detail in Rada and Taylor (2006) and Rada (2007). We present it briefly in Section 3, but the focus of the paper is to examine the role of macroeconomic policies in guiding structural transformation in China and India. Since these two most populous countries and their—quite different—economic trajectories are on many an economist's mind, the comparison seems appropriate, and is further motivated in Section 2. Section 4 discusses simulations, and Section 5 concludes.

In this paper we discuss why economic growth and improved efficiency are necessary but not sufficient conditions for long-run human and economic development. Structural transformation toward higher valued-added sectors and jobs is also required. This paper further explores macroeconomic policies that can sustain structural change in China and India. It does so by using a two-sector, open-economy model with endogenous productivity growth, demand driven output and income distribution as an important determinant of economic activity. The model addresses both short and long-run dynamics and it is calibrated to a 2000 SAM for China and a 1999/2000 SAM for India. The short-run analysis concerns temporary equilibria for output, productivity and employment growth rates in the formal sector. In the long-run the model allows for multiple equilibria which can be used to describe cases of underdevelopment, structural heterogeneity or sustained growth and development. The state variable is the share of formal employment in the economy which we assess vis-á-vis the stable equilibrium point. Several simulation results are noteworthy. Demand shocks. Main sources of demand are investment and exports. Labor reserves in the informal sector together with favorable demand shocks result in a positive output adjustment. Productivity and employment in the formal sector grow now at a faster pace in both economies. The degree of labor transfer and the share of formal employment depend on the size of the spending multiplier and on the growth rate of the labor force. A labor force expanding at almost 2 percent in India means that macroeconomic policy must aggressively pursue a rise in demand to attain significant structural change in the economy-wide employment. If business as usual is maintained the share of formal employment is expected to decline in the long-run. Sufficient incentives to investment and exports demand can reverse the situation in both China and India. Technical change. There is little doubt that developing economies benefit a great deal from adoption of technological knowledge from more advanced economies. Most of all, it fosters international competitiveness. At the same time, labor productivity gains can have adverse effects on the demand for labor inputs, if profitability from increased efficiency does not stimulate investment and export demand sufficiently. To use the terminology from this paper, such a situation signals a weakly profit-led economy which given parameter choices seems to be the case for both China and India. Technical change therefore, by itself, and in a weakly profit-led regime leads to jobless growth which has undesirable effects on structural transformation and development in the long-run. The dilemma between increased productivity and more and better jobs can be relaxed if both pro-growth and socially relevant economic policies are implemented as discussed in Section 4. Income distribution. The distribution of income has overarching implications for growth and development in both classical and Keynesian paradigms. This paper aligns itself with the latter and assumes that distribution of income acts upon economic activity through its implications on sources of demand. A profit-led regime in China and India means that a shift of income toward profits stimulates investment and exports enough to counteract the detrimental effects on consumption demand. Output, productivity and employment will all be growing at a faster rate. These outcomes hold for both short and long-run simulations and indicate that a policy targeting moderation in wage growth benefits both labor and capital. Currency depreciation. It can be said without exaggeration that the exchange rate is one of the most important price in an open economy and that smart exchange rate management has been crucial for the success of the East Asian Tigers (see Amsden, 2001 and Wade, 1992). Simulation results show that currency depreciation is expansionary in China but contractionary in India. Differences in the economic structure and the degree of reliance on imported inputs as captured by the μ2 parameter partially explain these outcomes. The policy lesson stemming from this brief review of main results is that economic structure matters. Historically, several developing economies, mostly from the East Asian region, have successfully set off a virtuous spiral of dynamic structural change characterized by labor transfers to higher value-added sectors as well as rapid productivity growth. The key to success appears to be the partnership between a developmental state and markets (Amsden, 2001 and Wade, 1992). Integration in the global economy provides valuable externalities related to technological transfer, financing and access to larger markets. A state active through macroeconomic policies of the sort discussed here is also essential. It can shape a developmental path that is sustainable and ignite dynamic structural changes to prevent detrimental social and economic outcomes such as the loss or absence of good jobs.