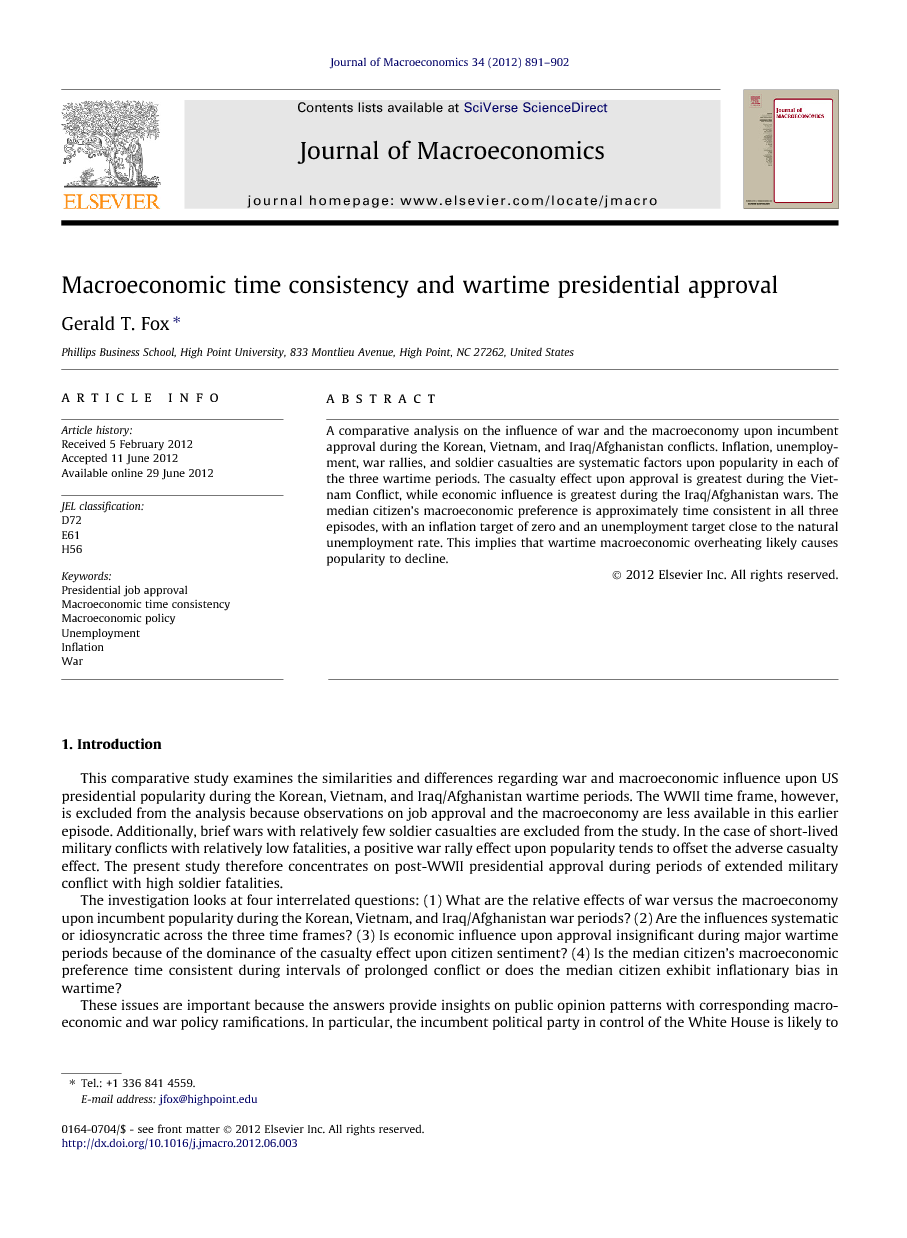 A comparative analysis on the influence of war and the macroeconomy upon incumbent approval during the Korean, Vietnam, and Iraq/Afghanistan conflicts. Inflation, unemployment, war rallies, and soldier casualties are systematic factors upon popularity in each of the three wartime periods. The casualty effect upon approval is greatest during the Vietnam Conflict, while economic influence is greatest during the Iraq/Afghanistan wars. The median citizen’s macroeconomic preference is approximately time consistent in all three episodes, with an inflation target of zero and an unemployment target close to the natural unemployment rate. This implies that wartime macroeconomic overheating likely causes popularity to decline.

This comparative study examines the similarities and differences regarding war and macroeconomic influence upon US presidential popularity during the Korean, Vietnam, and Iraq/Afghanistan wartime periods. The WWII time frame, however, is excluded from the analysis because observations on job approval and the macroeconomy are less available in this earlier episode. Additionally, brief wars with relatively few soldier casualties are excluded from the study. In the case of short-lived military conflicts with relatively low fatalities, a positive war rally effect upon popularity tends to offset the adverse casualty effect. The present study therefore concentrates on post-WWII presidential approval during periods of extended military conflict with high soldier fatalities. The investigation looks at four interrelated questions: (1) What are the relative effects of war versus the macroeconomy upon incumbent popularity during the Korean, Vietnam, and Iraq/Afghanistan war periods? (2) Are the influences systematic or idiosyncratic across the three time frames? (3) Is economic influence upon approval insignificant during major wartime periods because of the dominance of the casualty effect upon citizen sentiment? (4) Is the median citizen’s macroeconomic preference time consistent during intervals of prolonged conflict or does the median citizen exhibit inflationary bias in wartime? These issues are important because the answers provide insights on public opinion patterns with corresponding macroeconomic and war policy ramifications. In particular, the incumbent political party in control of the White House is likely to support economic and war policies that are compatible with popular sentiment so as to increase presidential job approval and improve reelection chances. Most empirical studies that look at the effects of the economy and war upon popularity employ a pooled single-equation model with fixed parameters across multiple consecutive administrations over peacetime and wartime. This approach, however, likely produces biased results. Economic and war-related influences upon approval tend to shift over time. Few analyses take a comparative approach that tests for similarities and differences regarding war and economic effects upon popularity across distinct wartime episodes. The present study examines this issue by estimating a three-equation presidential approval model corresponding to the Korean, Vietnam, and Iraq/Afghanistan war intervals. For each of the three periods, the model takes into account military fatalities, war rallies, unemployment, inflation, the median citizen’s macroeconomic preference, the presidential honeymoon, presidential scandals, and citizen opinion inertia. The empirical analysis shows that all effects are systematic upon wartime presidential approval across the three time frames. The magnitudes for several of the effects, however, are significantly different across the three intervals. In particular, the soldier casualty effect upon popularity is greatest during the Vietnam War, whereas macroeconomic influence upon approval is greatest during the Iraq/Afghanistan war period. The economy is a significant factor upon popularity in each of the war intervals, despite the substantial impact of military casualties upon citizen attitudes. This finding contradicts the assertion that the economy is of minor importance upon approval during periods of prolonged military conflict. The economy is a key determinant upon popularity during major wartime periods just as is the case for peacetime. Additionally, the median citizen’s macroeconomic preference is found to be approximately time consistent during the Korean, Vietnam, and Iraq/Afghanistan war periods, with an inflation target of price stability along with an unemployment target close to the natural unemployment rate. The result supports the sophisticated voter hypothesis that the electorate takes into account the long-run structure of the economy in their opinions of the incumbent. This implies that macroeconomic overheating from heavy military expenditures during wartime likely causes presidential approval to decline. Wartime macroeconomic overexpansion that causes unemployment to fall below the natural rate may therefore reduce reelection chances for the incumbent political party. In the next section, we review some of the literature concerning war and economic influence upon popularity during the Korean, Vietnam, and Iraq war periods. The three-equation wartime presidential approval model is then specified, and the economic and war-related determinants are discussed. The data are afterwards described and the empirical analysis is given. The concluding section summarizes the results and discusses policy implications.

War, economic, and other political factors are systematic influences upon presidential approval across the Korean, Vietnam, and Iraq/Afghanistan wartime episodes. The determinants include inflation, unemployment, a positive unemployment target near the natural unemployment rate, an inflation target of price stability, war rallies, soldier casualties, and citizen opinion inertia. The magnitudes for several of the effects are significantly different across the three periods. The inflation and unemployment effects upon approval are greatest during the Iraq/Afghanistan war episode relative to the other two war intervals. The casualty effect, on the other hand, is greatest during the Vietnam War compared to the other two periods. Because of the mixed results on the size of the casualty effect across the three war periods, we reject the hypothesis of increasing war aversion over time in the post-WWII era. Differences in the magnitude of the casualty effect upon presidential popularity across the three war episodes are likely attributable to differences in public opinion on the justification for different wars. If the public views a war as necessary or vital, then they are more likely to support a military engagement and the casualty effect is likely to be smaller upon job approval than if the public perceives a war as unnecessary or optional. This may help explain the large casualty effect upon popularity during the Vietnam War. Antiwar public attitudes against the Vietnam Conflict were particularly adamant compared to public opposition against the Korean and Iraq/Afghanistan wars. Although the size of the casualty effect varies across the three war periods, the log10 of cumulative fatalities exhibits a significant impact upon presidential approval in all three cases. The war fatality variable takes into account that the casualty effect is more adverse upon the popularity of war initiators compared to war inheritors. Because war fatalities have a large marginal impact upon job approval at the start of a militarized conflict, an implication is that risk-averse presidencies are inclined to resist initial military confrontation.28Chan and Safran (2006, 137–38) remark: “A central logic of the democratic peace theory claims that public opinion acts as a powerful restraint against war…. [P]ublic opinion restrains the leaders of democracies from taking their country to war absent a strong popular mandate”. The casualty effect upon approval creates a safeguard against militarism. A casualty-averse public is unlikely to support unnecessary military action that involves high soldier fatalities. On the other hand, extreme war aversion among the electorate could hinder necessary military involvement. An excessively war-averse public may oppose armed intervention even in instances of essential national security. Military appeasement could consequently lead to an even worse war in the future. As Smith (2005, 488) notes: “Concern for casualties is healthy; casualty aversion or phobia is not”. Regarding economic influence, our analysis rejects the assumption that inflation and unemployment are unimportant factors upon popularity during periods of protracted war. The economy significantly affects wartime job approval, despite the major impact of war rallies and military fatalities. Consequently, presidents who neglect the economy in wartime do so at their peril if they mistakenly presume war outcomes completely outweigh economic events upon popularity. An incumbent political party that seeks reelection to the White House should not underestimate the economy in wartime. A low-inflation, full-employment economy during a protracted military conflict partially negates the adverse influence of casualties upon popularity. Alternatively, a recessionary economy exacerbates the negative impact of casualties upon wartime job approval. Recent examples of this outcome include the negative effect of a sluggish economy upon wartime presidential approval for G.W. Bush during his second term in office, as well as the detrimental impact of the Great Recession upon the job approval of the subsequent wartime Obama presidency. Our analysis finds that the median citizen’s macroeconomic preference is close to time consistent during the Korean and Iraq/Afghanistan war periods, with perhaps mild inflation bias in the median unemployment target during the Vietnam War. An important implication occurs in the case of a time-consistent macroeconomic preference by the median citizen during wartime. Excessive macroeconomic demand that causes inflation to rise and unemployment to fall below the natural rate causes wartime presidential approval to decline. Examples of this result include the adverse effects of an overheated wartime economy upon presidential approval for Truman during the Korean War, as well as upon Johnson during the Vietnam War. A time consistent macroeconomic preference by the median citizen acts as a partial political constraint against overly-expansive wartime fiscal and monetary policies. In order to maximize wartime popularity, given macroeconomic time consistency by the median citizen, presidencies should pursue an objective of price stability at an unemployment target close to the natural unemployment rate. This result is notable in wartime when the political inclination is often to expand the budget deficit and monetize military spending. Presidencies may choose to deviate from macroeconomic time consistency and adopt expansive wartime macroeconomic policies. The political cost of an overheated wartime economy, however, is likely to be lower job approval and reduced reelection votes.