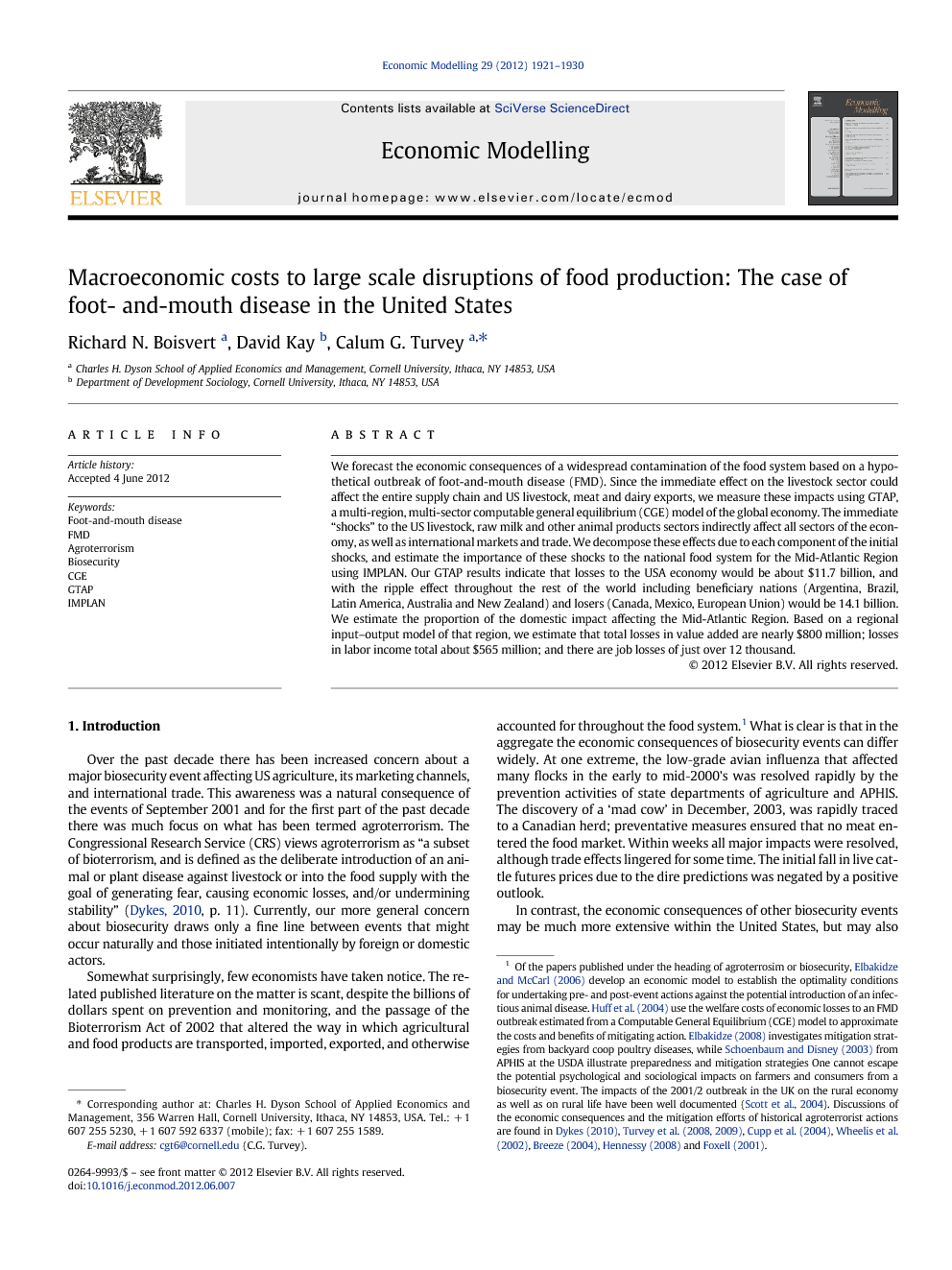 We forecast the economic consequences of a widespread contamination of the food system based on a hypothetical outbreak of foot-and-mouth disease (FMD). Since the immediate effect on the livestock sector could affect the entire supply chain and US livestock, meat and dairy exports, we measure these impacts using GTAP, a multi-region, multi-sector computable general equilibrium (CGE) model of the global economy. The immediate “shocks” to the US livestock, raw milk and other animal products sectors indirectly affect all sectors of the economy, as well as international markets and trade. We decompose these effects due to each component of the initial shocks, and estimate the importance of these shocks to the national food system for the Mid-Atlantic Region using IMPLAN. Our GTAP results indicate that losses to the USA economy would be about $11.7 billion, and with the ripple effect throughout the rest of the world including beneficiary nations (Argentina, Brazil, Latin America, Australia and New Zealand) and losers (Canada, Mexico, European Union) would be 14.1 billion. We estimate the proportion of the domestic impact affecting the Mid-Atlantic Region. Based on a regional input–output model of that region, we estimate that total losses in value added are nearly $800 million; losses in labor income total about $565 million; and there are job losses of just over 12 thousand.

Over the past decade there has been increased concern about a major biosecurity event affecting US agriculture, its marketing channels, and international trade. This awareness was a natural consequence of the events of September 2001 and for the first part of the past decade there was much focus on what has been termed agroterrorism. The Congressional Research Service (CRS) views agroterrorism as “a subset of bioterrorism, and is defined as the deliberate introduction of an animal or plant disease against livestock or into the food supply with the goal of generating fear, causing economic losses, and/or undermining stability” (Dykes, 2010, p. 11). Currently, our more general concern about biosecurity draws only a fine line between events that might occur naturally and those initiated intentionally by foreign or domestic actors. Somewhat surprisingly, few economists have taken notice. The related published literature on the matter is scant, despite the billions of dollars spent on prevention and monitoring, and the passage of the Bioterrorism Act of 2002 that altered the way in which agricultural and food products are transported, imported, exported, and otherwise accounted for throughout the food system.1 What is clear is that in the aggregate the economic consequences of biosecurity events can differ widely. At one extreme, the low‐grade avian influenza that affected many flocks in the early to mid‐2000's was resolved rapidly by the prevention activities of state departments of agriculture and APHIS. The discovery of a ‘mad cow’ in December, 2003, was rapidly traced to a Canadian herd; preventative measures ensured that no meat entered the food market. Within weeks all major impacts were resolved, although trade effects lingered for some time. The initial fall in live cattle futures prices due to the dire predictions was negated by a positive outlook. In contrast, the economic consequences of other biosecurity events may be much more extensive within the United States, but may also extend beyond the domestic borders, disrupting trade among countries and may lead to trade embargos as other countries attempt to protect their agricultural industries and food supplies. One could imagine how such a series of economic consequences could accompany the discovery of a case of foot-and-mouth disease in any of the contiguous states. The immediate consequence would likely be a large‐scale eradication of livestock herds, but a global embargo, spearheaded by the disease‐free regions, may ensue as well. To illustrate, Great Britain's outbreak of foot-and-mouth disease (FMD) in 2001 prompted the slaughter of more than four million farm animals, and led to billions of dollars in losses to farmers. Domestic consumption of beef in the UK fell dramatically, and the decline in British beef exports was a major disruption in international trade.2 The economic costs were estimated at about ₤3.1 billion to agriculture and the food chain, and there were further losses of between ₤2.7 and ₤3.2 billion to businesses directly affected by reduced expenditures from tourists. This disease is a major constraint to the international livestock trade. In March 1997 with a single pig imported to Taiwan from Hong Kong the disease spread throughout Taiwan in 6 weeks with authorities slaughtering more than eight million pigs and barring exports. Ultimate costs were estimated to be at least $19 billion, $4 billion to eradicate the disease and another $15 billion in trade losses (Dykes, 2010). In 2002, the mere rumor of FMD in Kansas resulted in a $50 million scare (Dykes, 2010).3