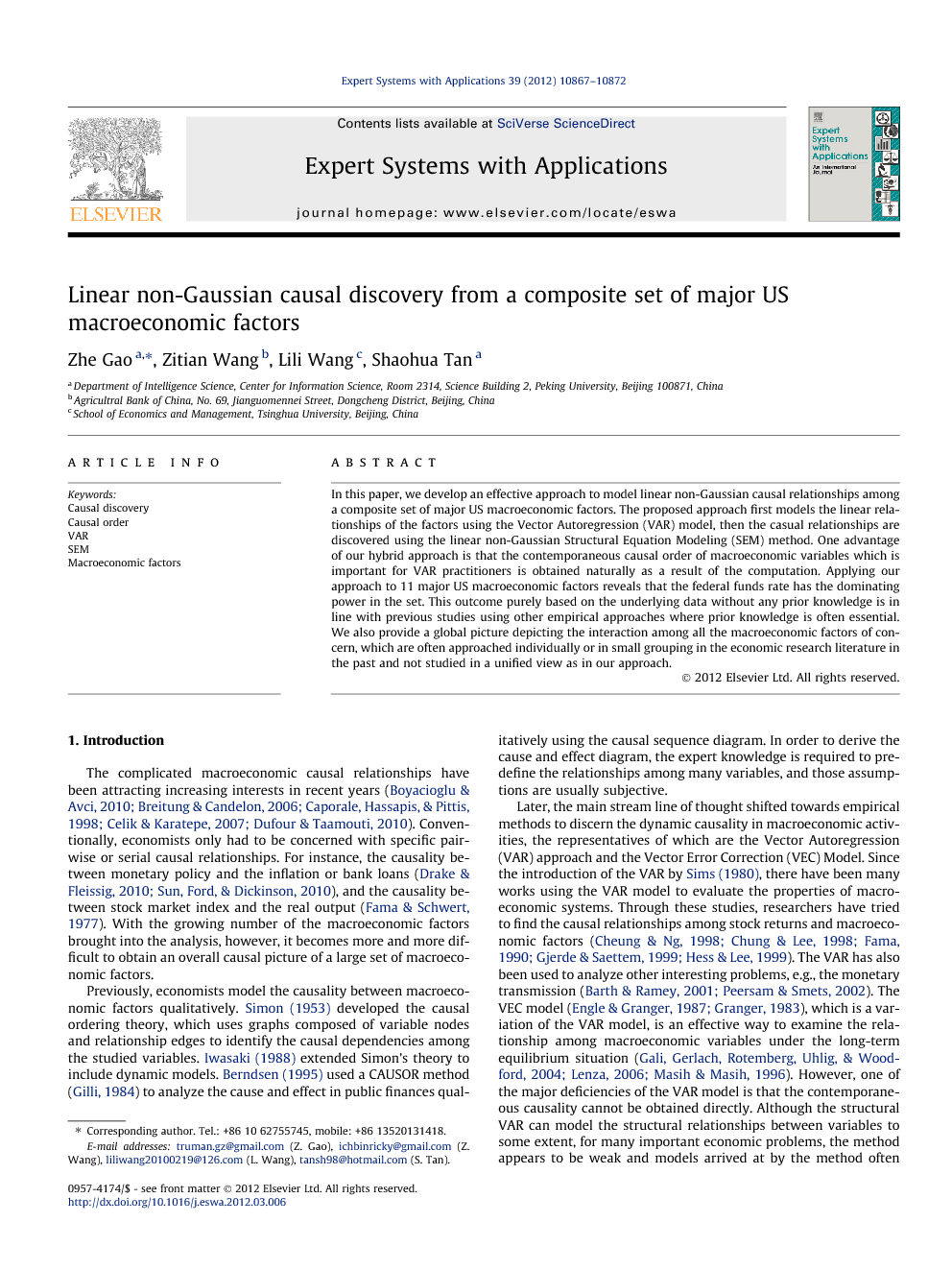 In this paper, we develop an effective approach to model linear non-Gaussian causal relationships among a composite set of major US macroeconomic factors. The proposed approach first models the linear relationships of the factors using the Vector Autoregression (VAR) model, then the casual relationships are discovered using the linear non-Gaussian Structural Equation Modeling (SEM) method. One advantage of our hybrid approach is that the contemporaneous causal order of macroeconomic variables which is important for VAR practitioners is obtained naturally as a result of the computation. Applying our approach to 11 major US macroeconomic factors reveals that the federal funds rate has the dominating power in the set. This outcome purely based on the underlying data without any prior knowledge is in line with previous studies using other empirical approaches where prior knowledge is often essential. We also provide a global picture depicting the interaction among all the macroeconomic factors of concern, which are often approached individually or in small grouping in the economic research literature in the past and not studied in a unified view as in our approach.

The complicated macroeconomic causal relationships have been attracting increasing interests in recent years (Boyacioglu and Avci, 2010, Breitung and Candelon, 2006, Caporale et al., 1998, Celik and Karatepe, 2007 and Dufour and Taamouti, 2010). Conventionally, economists only had to be concerned with specific pair-wise or serial causal relationships. For instance, the causality between monetary policy and the inflation or bank loans (Drake and Fleissig, 2010 and Sun et al., 2010), and the causality between stock market index and the real output (Fama & Schwert, 1977). With the growing number of the macroeconomic factors brought into the analysis, however, it becomes more and more difficult to obtain an overall causal picture of a large set of macroeconomic factors. Previously, economists model the causality between macroeconomic factors qualitatively. Simon (1953) developed the causal ordering theory, which uses graphs composed of variable nodes and relationship edges to identify the causal dependencies among the studied variables. Iwasaki (1988) extended Simon’s theory to include dynamic models. Berndsen (1995) used a CAUSOR method (Gilli, 1984) to analyze the cause and effect in public finances qualitatively using the causal sequence diagram. In order to derive the cause and effect diagram, the expert knowledge is required to predefine the relationships among many variables, and those assumptions are usually subjective. Later, the main stream line of thought shifted towards empirical methods to discern the dynamic causality in macroeconomic activities, the representatives of which are the Vector Autoregression (VAR) approach and the Vector Error Correction (VEC) Model. Since the introduction of the VAR by Sims (1980), there have been many works using the VAR model to evaluate the properties of macroeconomic systems. Through these studies, researchers have tried to find the causal relationships among stock returns and macroeconomic factors (Cheung and Ng, 1998, Chung and Lee, 1998, Fama, 1990, Gjerde and Saettem, 1999 and Hess and Lee, 1999). The VAR has also been used to analyze other interesting problems, e.g., the monetary transmission (Barth and Ramey, 2001 and Peersam and Smets, 2002). The VEC model (Engle and Granger, 1987 and Granger, 1983), which is a variation of the VAR model, is an effective way to examine the relationship among macroeconomic variables under the long-term equilibrium situation (Gali et al., 2004, Lenza, 2006 and Masih and Masih, 1996). However, one of the major deficiencies of the VAR model is that the contemporaneous causality cannot be obtained directly. Although the structural VAR can model the structural relationships between variables to some extent, for many important economic problems, the method appears to be weak and models arrived at by the method often lacks sufficient explanatory power (Hoover, Demiralp, & Perez, 2009). In this paper, we develop a hybrid approach that automatically identifies the causal structure from the data records of macroeconomic factors by combining the VAR with the newly developed linear non-Gaussian Structural Equation Modeling method (Sogawa, Shimizu, Kawahara, & Washio, 2010) The proposed approach first models the linear relationships of the factors using the VAR model, then the casual relationships are discovered using the linear non-Gaussian Structural Equation Modeling method. The discovered causal relationships not only capture the contemporaneous causal order, but also depict the global causal picture among the macroeconomic factors. This purely data-driven approach does not assume any prior knowledge as often was the case in the previous methods. Empirically, the relationships among the US monetary policy, monetary transmission, GDP, equity market, and mortgage activity are studied by applying our approach. The global picture of 11 macroeconomic factors interactions is obtained, which clearly illustrate some well-known interactions (Andersena et al., 2007, Ben and Alan, 1992, Boyd et al., 2005 and Litterman and Weiss, 1985), as well as some new findings of relationships. For example, the federal funds rate is the dominate factor in the whole structure and industrial production is the direct cause of stock market return. The rest of the paper is organized as follows. In Section 2, we formulate the problem of causal discovery among macroeconomic factors. In Section 3, the solution taking the advantage of both VAR model and the linear non-Gaussian Structural Equation Modeling method to find the causality among macroeconomic factors is proposed. Empirical results based on time-series data of a set of 11 US major macroeconomic factors are in Section 4. Finally, some conclusions are drawn in Section 5.

In this paper we have developed an approach to discover the causal relationship and demonstrated its validity by applying to the analysis of some US macroeconomic factors. Being a hybrid technique, our method combines the economic model VAR and artificial intelligence methods LiNGAM together. It is able to identify the causality from the data automatically and without any prior knowledge or expert input of any kind. There are some very interesting relationships discovered by our experiment with the US macroeconomic data, which not only prove certain claims and hypothesis in some of the previous research works, but also provide a new perspective of causal relationship between macroeconomic and stock market.