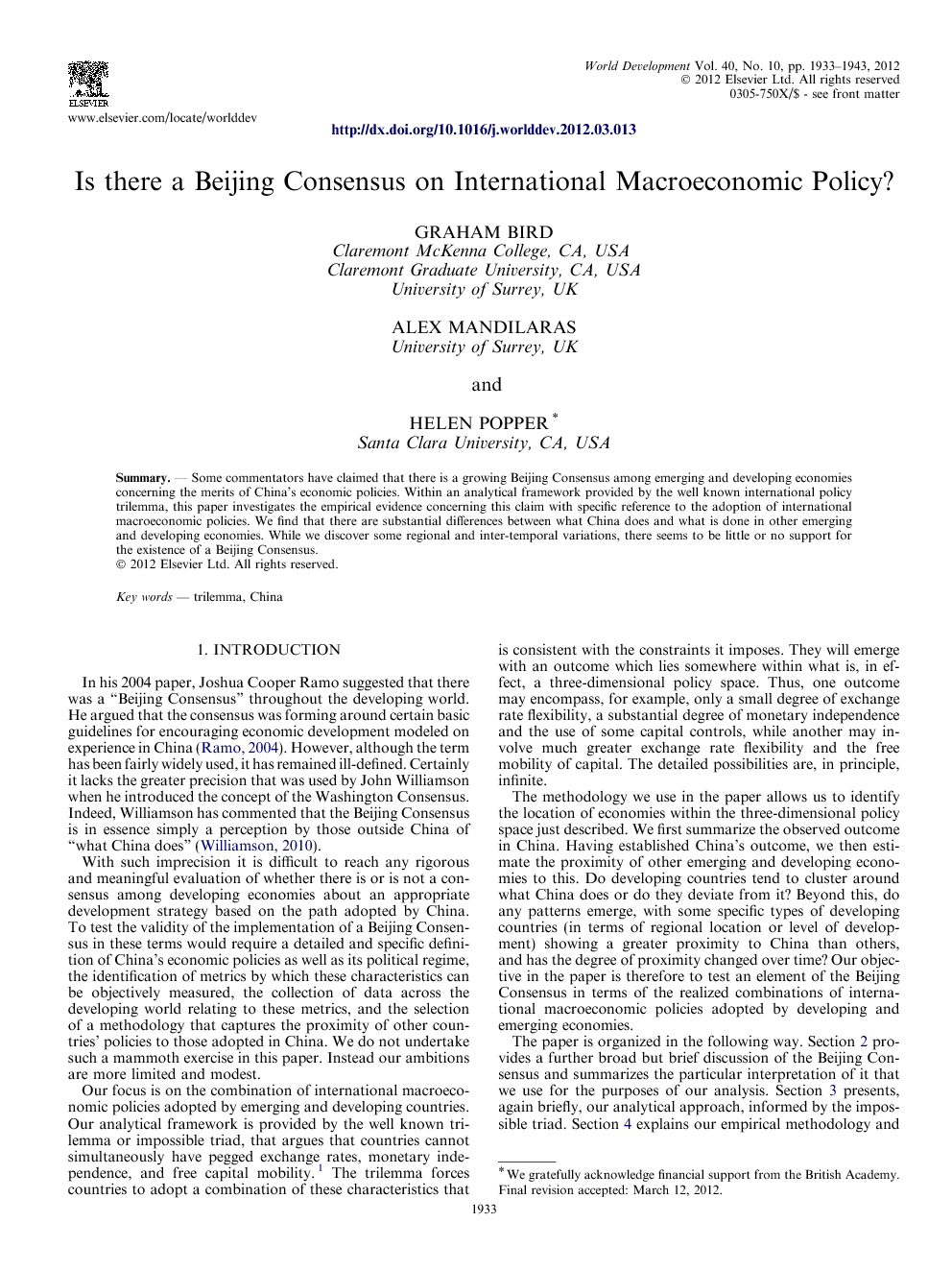 Some commentators have claimed that there is a growing Beijing Consensus among emerging and developing economies concerning the merits of China’s economic policies. Within an analytical framework provided by the well known international policy trilemma, this paper investigates the empirical evidence concerning this claim with specific reference to the adoption of international macroeconomic policies. We find that there are substantial differences between what China does and what is done in other emerging and developing economies. While we discover some regional and inter-temporal variations, there seems to be little or no support for the existence of a Beijing Consensus.

In his 2004 paper, Joshua Cooper Ramo suggested that there was a “Beijing Consensus” throughout the developing world. He argued that the consensus was forming around certain basic guidelines for encouraging economic development modeled on experience in China (Ramo, 2004). However, although the term has been fairly widely used, it has remained ill-defined. Certainly it lacks the greater precision that was used by John Williamson when he introduced the concept of the Washington Consensus. Indeed, Williamson has commented that the Beijing Consensus is in essence simply a perception by those outside China of “what China does” (Williamson, 2010). With such imprecision it is difficult to reach any rigorous and meaningful evaluation of whether there is or is not a consensus among developing economies about an appropriate development strategy based on the path adopted by China. To test the validity of the implementation of a Beijing Consensus in these terms would require a detailed and specific definition of China’s economic policies as well as its political regime, the identification of metrics by which these characteristics can be objectively measured, the collection of data across the developing world relating to these metrics, and the selection of a methodology that captures the proximity of other countries’ policies to those adopted in China. We do not undertake such a mammoth exercise in this paper. Instead our ambitions are more limited and modest. Our focus is on the combination of international macroeconomic policies adopted by emerging and developing countries. Our analytical framework is provided by the well known trilemma or impossible triad, that argues that countries cannot simultaneously have pegged exchange rates, monetary independence, and free capital mobility.1 The trilemma forces countries to adopt a combination of these characteristics that is consistent with the constraints it imposes. They will emerge with an outcome which lies somewhere within what is, in effect, a three-dimensional policy space. Thus, one outcome may encompass, for example, only a small degree of exchange rate flexibility, a substantial degree of monetary independence and the use of some capital controls, while another may involve much greater exchange rate flexibility and the free mobility of capital. The detailed possibilities are, in principle, infinite. The methodology we use in the paper allows us to identify the location of economies within the three-dimensional policy space just described. We first summarize the observed outcome in China. Having established China’s outcome, we then estimate the proximity of other emerging and developing economies to this. Do developing countries tend to cluster around what China does or do they deviate from it? Beyond this, do any patterns emerge, with some specific types of developing countries (in terms of regional location or level of development) showing a greater proximity to China than others, and has the degree of proximity changed over time? Our objective in the paper is therefore to test an element of the Beijing Consensus in terms of the realized combinations of international macroeconomic policies adopted by developing and emerging economies. The paper is organized in the following way. Section 2 provides a further broad but brief discussion of the Beijing Consensus and summarizes the particular interpretation of it that we use for the purposes of our analysis. Section 3 presents, again briefly, our analytical approach, informed by the impossible triad. Section 4 explains our empirical methodology and reports our findings. Robustness checks are reported in Section 5, and a relevant discussion on the role of international reserves and financial liberalization is in Section 6. Finally Section 7, provides a succinct summary and makes a few concluding remarks about the possible evolution of trilemma outcomes for China, in the light of experience in more advanced economies.

The idea of a Beijing Consensus has been widely discussed but remains ill-defined. To some, it means a consensus among developing countries about an entire range of microeconomic and macroeconomic policies. To others, it refers to a consensus about the superiority of a gradualist approach to economic reform. To still others, it implies a consensus around the advantages of export led growth and reserve accumulation. It has even been interpreted to mean a consensus around China’s proposals for international monetary reform based on the Special Drawing Right. In this article we have empirically examined one specific and tightly defined aspect of the Beijing Consensus. Within an analytical framework provided by the impossible trinity or trilemma, we have investigated the extent to which developing and emerging economies have adopted a trilemma outcome, in terms of the combination of exchange rate policy, financial openness, and monetary independence, that is close to “what China does”. Have emerging and developing economies exhibited a similar combination of international macroeconomic policies to China? Unsurprisingly, and perhaps reassuringly, we find that China has generally been close to the conventional view of what may be characterized as the “China archetype” of exchange rate stability, closed financial markets, and monetary independence. However, for both the group of emerging economies (excluding China) and developing countries in general, exchange rates have tended to be less stable than in China, and there has been a greater degree of financial openness and less monetary independence. If anything, and for emerging economies in particular, the gap between what they do and what China does has been widening. We also find that there are significant regional disparities, with the greatest proximity to China’s international macroeconomic policies being found in Sub Saharan Africa and South Asia. In general, however, the empirical evidence we present suggests that the idea of a Beijing Consensus existing in practice throughout the developing world in terms of exchange rate policy, financial openness, and monetary independence is misplaced, and perhaps increasingly so. Of course, as China develops, it may itself change what it does in terms of international macroeconomic policy, with these changes leading it further away from the China archetype. Our data reveal periods of policy change in China, particularly between 1990 and 1996. Advanced economy trilemma configurations generally involve greater exchange rate flexibility and financial openness. The question remains as to whether China will move in this direction, and how far and how fast it will move. It would be unsafe to assume that changes in the trilemma outcome are driven solely, or even largely, by the stage of economic development. Other factors—political, social, and cultural, as well as economic—may exert a significant influence; China may yet exhibit a different pattern of development. Having said this, if China is committed to establishing the renminbi as an international currency and to having it included as part of the basket of currencies upon which the Special Drawing Right is valued—and there are some indications that it is so committed—there will be pressures on China to change what it does in terms of international macroeconomic policy. In these circumstances, a time may arrive when not even China subscribes to the contemporary notion of the Beijing Consensus. For the time being, and for the short to medium future, however, what China does in terms of international macroeconomic policy seems to differ significantly from what is done in the rest of the developing world. The “China archetype” offers an apt description of what China currently does, but not of what other emerging and developing countries do.