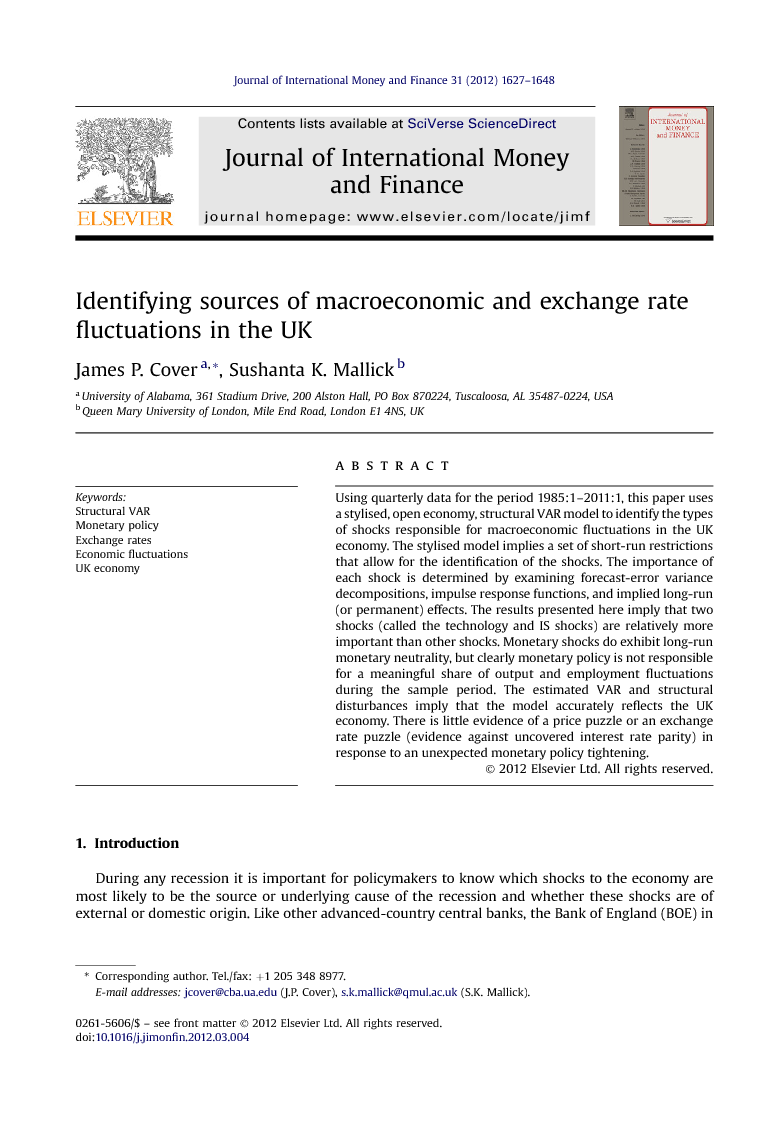 Using quarterly data for the period 1985:1–2011:1, this paper uses a stylised, open economy, structural VAR model to identify the types of shocks responsible for macroeconomic fluctuations in the UK economy. The stylised model implies a set of short-run restrictions that allow for the identification of the shocks. The importance of each shock is determined by examining forecast-error variance decompositions, impulse response functions, and implied long-run (or permanent) effects. The results presented here imply that two shocks (called the technology and IS shocks) are relatively more important than other shocks. Monetary shocks do exhibit long-run monetary neutrality, but clearly monetary policy is not responsible for a meaningful share of output and employment fluctuations during the sample period. The estimated VAR and structural disturbances imply that the model accurately reflects the UK economy. There is little evidence of a price puzzle or an exchange rate puzzle (evidence against uncovered interest rate parity) in response to an unexpected monetary policy tightening.

The opening paragraph of this paper asks whether the Bank of England's response to the recent economic slowdown has been reasonable. The findings of this paper suggest that the answer appears to be yes. We find that most of the forecast-error variation in both real GDP and the unemployment rate can be explained by two shocks (called the technology and IS shocks) and that these two shocks also explain about 28% of the variation in the Bank Rate. As shown in Figs. 1 and 3 when the either of these two shocks causes output to decline or the unemployment rate to increase, the Bank of England has responded by reducing the bank rate. The point estimates in the fourth row of Table 3 imply that the Bank of England has lowered the bank rate in response to contractionary shocks, and increased it in response to expansionary shocks. Our counterfactual simulations show that within our sample period these responses have reduced the variance of both output and the unemployment rate. This paper uses a five-variable, structural VAR model of the British economy to obtain these results. Whereas the technology and IS shocks explain most of the variation in unemployment rate and output and also jointly explain important shares of the variation in the bank rate and the exchange rate, we find that the other three shocks in the model primarily affect only one variable. For this reason, the results of this paper are very robust with respect to several changes in the set of identifying assumptions employed. Notably, at standard significance levels we cannot reject an over-identified form of our model in which the technology shock has a current effect on only the unemployment rate, output and the bank rate, while each of the other shocks has a current effect on only one variable. We also find that using the real effective exchange rate rather than the nominal effective exchange rate has little or no effect on the results reported here. Finally, we use historical decompositions to show that the technology and IS shocks explain nearly all the variation in the unemployment rate and level of output during the recessions of 1990–1992 and 2008–2009. Given that these two shocks also respectively explain 84% and 91% of the long-run forecast-error variance of the unemployment rate and output growth, it would appear that the Bank of England would be on firm ground if it continues to operate if these two shocks are the primary cause of future fluctuations in output.