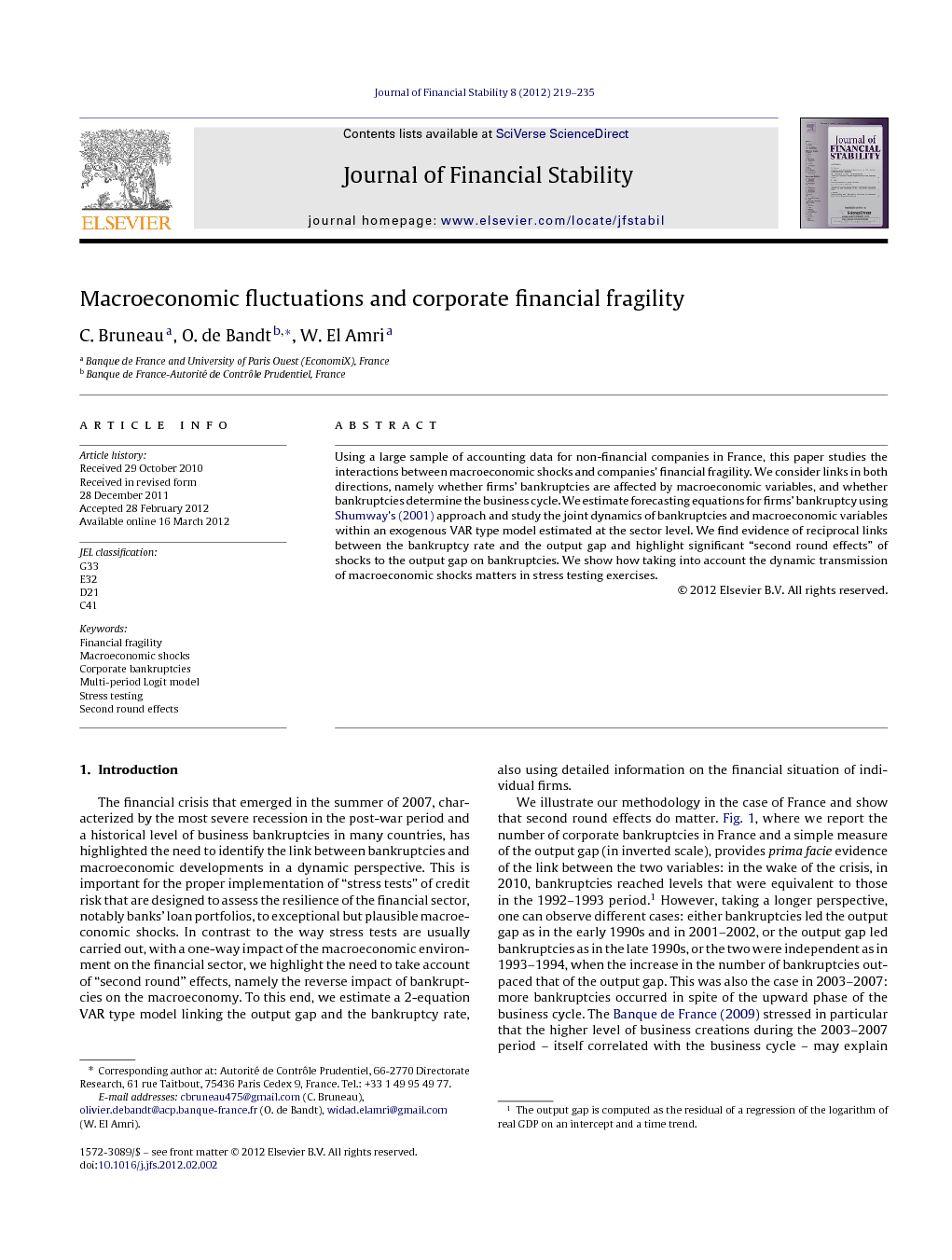 Using a large sample of accounting data for non-financial companies in France, this paper studies the interactions between macroeconomic shocks and companies’ financial fragility. We consider links in both directions, namely whether firms’ bankruptcies are affected by macroeconomic variables, and whether bankruptcies determine the business cycle. We estimate forecasting equations for firms’ bankruptcy using Shumway's (2001) approach and study the joint dynamics of bankruptcies and macroeconomic variables within an exogenous VAR type model estimated at the sector level. We find evidence of reciprocal links between the bankruptcy rate and the output gap and highlight significant “second round effects” of shocks to the output gap on bankruptcies. We show how taking into account the dynamic transmission of macroeconomic shocks matters in stress testing exercises.

This paper reports empirical evidence of the links between macroeconomic cycles and changes in financial fragility measured at the microeconomic level by focusing on corporate firms in France. We estimate a VAR type system of two equations at the sector level: the first describes an indicator of firms’ bankruptcies – measured as the Log of the odd ratio – as a linear function of financial ratios and macroeconomic variables; the second specifies the dynamics of the output gap as a linear function of firms’ bankruptcies. The first equation is estimated at the firm level and then aggregated at the sector level. This equation is derived from a multi-period Logit model in order to take account of the progressive deterioration of the financial conditions of firms in predicting their potential default. This multi-period Logit model is easily implemented through a standard Logit estimation along the lines of Shumway (2001). We show that macroeconomic conditions do have an effect on the bankruptcy rate of corporate firms, as proved by the significant impact of lagged macroeconomic variables as well as financial ratios in the multi-period Logit model estimated for each firm. Indeed, we find that the output gap included in this model with lags of two and three years has a significant negative effect on the default probability estimated at the firm level. Second, by regressing the output gap on its lagged values and the observed bankruptcy indicator at the sector level, and by using a panel GMM estimation method, we find a negative coefficient for the bankruptcy rate, which is only significant when introduced contemporaneously into the equation. It provides evidence that the financial fragility of firms does indeed have an impact on the business cycle. Third, using the system of the two previous equations, which assess the joint dynamics of the output gap and financial fragility, we highlight the importance of taking into account in stress testing exercises both the persistence of the output gap and the feedback effects of bankruptcies on the output gap. Indeed, given the statistically and economically significant effect of bankruptcies on the output gap, second round effects appear quite clearly. The fact that dynamic effects matter also implies that, following an output gap shock, the distribution of bankruptcies is expected to be more permanently affected than in standard stress testing exercises. The proper design of the macroeconomic environment of stress tests therefore requires taking account of the feedback effects that can be captured through financial fragility indicators, such as bankruptcy rates. In the course of the paper we have identified a few trade-offs associated with our approach. First, endogenising defaults through the use of accounting data, which are annual, restricts the analysis to lower frequencies. But accounting data at the micro level allow a more robust estimation of the model parameters. They also cover, in our case, a larger set of companies than only quoted firms, given the existence of many small and medium-sized firms. While quoted firms offer a larger set of indicators, notably asset prices, financial markets data may sometimes provide inadequate signals during crisis periods. Second, using a bivariate system, together with exogenous variables, instead of a larger VAR, increases the robustness of the results as well as reduces the need for additional identification assumptions. In this study, we assumed that all sectors are homogenous regarding the impact of the business cycle on the bankruptcy rate. Future research could consider estimating separate default models for the different sectors. In that case, our methodology to assess second round effects could be extended relatively easily. It would also be useful to compare our results with estimates of the impact of bankruptcies on the business cycle in other countries.