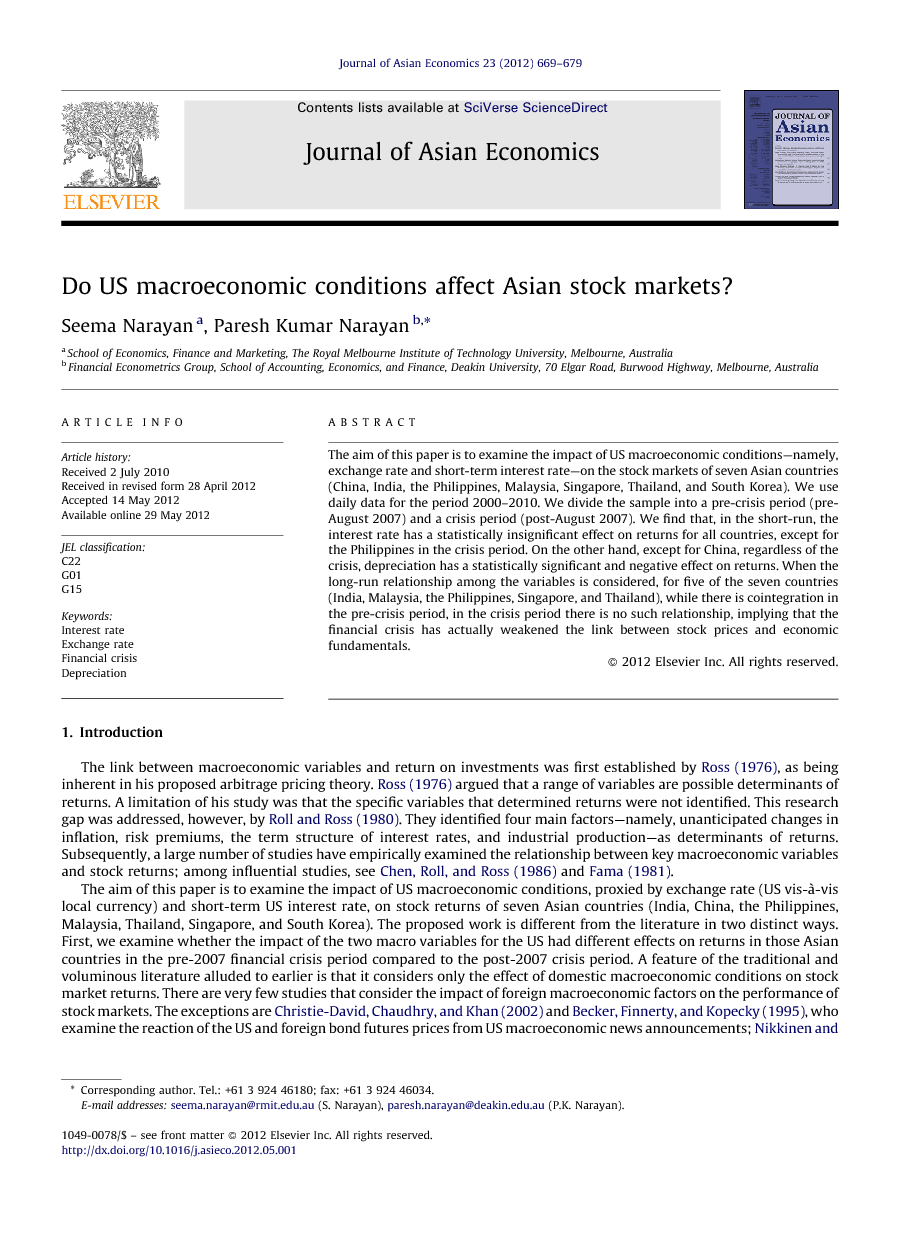 The aim of this paper is to examine the impact of US macroeconomic conditions—namely, exchange rate and short-term interest rate—on the stock markets of seven Asian countries (China, India, the Philippines, Malaysia, Singapore, Thailand, and South Korea). We use daily data for the period 2000–2010. We divide the sample into a pre-crisis period (pre-August 2007) and a crisis period (post-August 2007). We find that, in the short-run, the interest rate has a statistically insignificant effect on returns for all countries, except for the Philippines in the crisis period. On the other hand, except for China, regardless of the crisis, depreciation has a statistically significant and negative effect on returns. When the long-run relationship among the variables is considered, for five of the seven countries (India, Malaysia, the Philippines, Singapore, and Thailand), while there is cointegration in the pre-crisis period, in the crisis period there is no such relationship, implying that the financial crisis has actually weakened the link between stock prices and economic fundamentals.

The link between macroeconomic variables and return on investments was first established by Ross (1976), as being inherent in his proposed arbitrage pricing theory. Ross (1976) argued that a range of variables are possible determinants of returns. A limitation of his study was that the specific variables that determined returns were not identified. This research gap was addressed, however, by Roll and Ross (1980). They identified four main factors—namely, unanticipated changes in inflation, risk premiums, the term structure of interest rates, and industrial production—as determinants of returns. Subsequently, a large number of studies have empirically examined the relationship between key macroeconomic variables and stock returns; among influential studies, see Chen, Roll, and Ross (1986) and Fama (1981). The aim of this paper is to examine the impact of US macroeconomic conditions, proxied by exchange rate (US vis-à-vis local currency) and short-term US interest rate, on stock returns of seven Asian countries (India, China, the Philippines, Malaysia, Thailand, Singapore, and South Korea). The proposed work is different from the literature in two distinct ways. First, we examine whether the impact of the two macro variables for the US had different effects on returns in those Asian countries in the pre-2007 financial crisis period compared to the post-2007 crisis period. A feature of the traditional and voluminous literature alluded to earlier is that it considers only the effect of domestic macroeconomic conditions on stock market returns. There are very few studies that consider the impact of foreign macroeconomic factors on the performance of stock markets. The exceptions are Christie-David, Chaudhry, and Khan (2002) and Becker, Finnerty, and Kopecky (1995), who examine the reaction of the US and foreign bond futures prices from US macroeconomic news announcements; Nikkinen and Sahlstrom (2004), who examine both domestic and worldwide (proxied by the US) macroeconomic news in stock valuations on European stock markets; Nasseh and Strauss (2000), who use a variance decomposition analysis and report that German short-term interest rates impacted stock prices in European countries; and Arora and Cerisola (2001), who examine the impact of the US monetary policy on country risk, proxied by the sovereign spreads, of emerging markets. They find that the level of the US interest rate has positive effects on sovereign risk. Furthermore, some studies suggest that Asian markets are integrated with the US market. Chou, Ng, and Pi (1994) found that the stock price indices of the US and those of the G5 countries were co-integrated and that this relationship became stronger over time, or with the increasing liberalisation and globalisation of capital markets. Similarly, Cheng and Glascock (2006) show that stock market integration between the US and three Asian countries—China, Hong Kong and Taiwan—increased after the 1997 Asian financial crisis.1 Integration of Asian markets with the US suggests that the US macroeconomic factors may be contributing to movements in Asian stock markets, or vice versa. In addition, a sound argument in favour of modelling the influence of the US macroeconomic condition is provided by Nikkinen and Sahlstrom (2004: pp. 201–202), who contend that firms operating in several markets are not only concerned about what is happening in one particular market, they are also interested in the economic conditions in the largest market because they have implications on their profitability and decision making. It is also convenient to examine the effects of the macroeconomic conditions in the US, as it is also an important trading partner of the Asian countries. Second, the short sample period which is due to the fact that the financial crisis is only a few years old, means that unlike the extant literature we cannot use monthly data; rather, to have a reasonable sample period for estimation, we need to use daily data, which we do. Our approach of using daily data provides us an opportunity to examine the impact of US macro variables in the pre-crisis and crisis periods. One disadvantage, however, is that the use of daily data precludes us from using a wide range of macro variables as proposed by, for instance, Roll and Ross (1980). This caveat is a result of the fact that daily data on unemployment, industrial production, and inflation do not exist. At the same time, it is also true that either due to econometric estimation constraints or data constraints we will never be able to capture all the determinants of returns. Nonetheless, we believe that these macroeconomic conditions are indirectly captured in the exchange rate and interest rate variables that we use. For instance, a stable and competitive exchange rate and interest rate tend to coincide with strong macroeconomic conditions in a country, including high growth of economic activity. As a result, we believe that our work, while by no means perfect from the point of view of model specification, sufficiently captures the domestic macroeconomic conditions. We organise the balance of the paper as follows. In Section 2, we discuss the empirical model and the theoretical framework that motivates the empirical framework. In Section 3, we discuss the data and the findings. In the final section, we provide concluding remarks.

In this paper we examine the impact of the US macroeconomic fundamentals on the stock market performance of seven Asian countries, namely, China, India, the Philippines, Malaysia, Singapore, Thailand and South Korea. Due to the short time span of the crisis, the lack of time series observations is a problem. To solve this problem, unlike previous studies in this literature which have used monthly data, we use daily data. The use of daily data precludes the use of a wide range of macro variables, apart from exchange rate and interest rate, simply because daily data on economic activity (industrial production mainly), inflation rates, and unemployment rates do not exist. We use daily data for the period 2000–2010, and divide the sample into the pre-crisis period (pre-August 2007) and the crisis period (post-August 2007). Our main findings are as follows. First, we find that, in the short-run, changes in the US interest rate have statistically insignificant effects on returns for all countries except for the Philippines. For the Philippines, the interest rate has a statistically significant and positive effect on returns in the crisis period. Second, except for China, regardless of the crisis, exchange rate has had a statistically significant and negative effect on returns. Third, when the long-run relationship among the variables is considered, for five of the seven countries (India, Malaysia, the Philippines, Singapore and Thailand), while evidence of cointegration was found in the pre-crisis period, no such evidence was found in the crisis period. This implies that the financial crisis actually weakened the long-run relationship between stock prices and economic fundamentals. Finally, for China and South Korea, the cointegration relationship existed in both periods, meaning that the financial crisis did not disrupt the long-run relationship between the US macro fundamentals and stock prices.