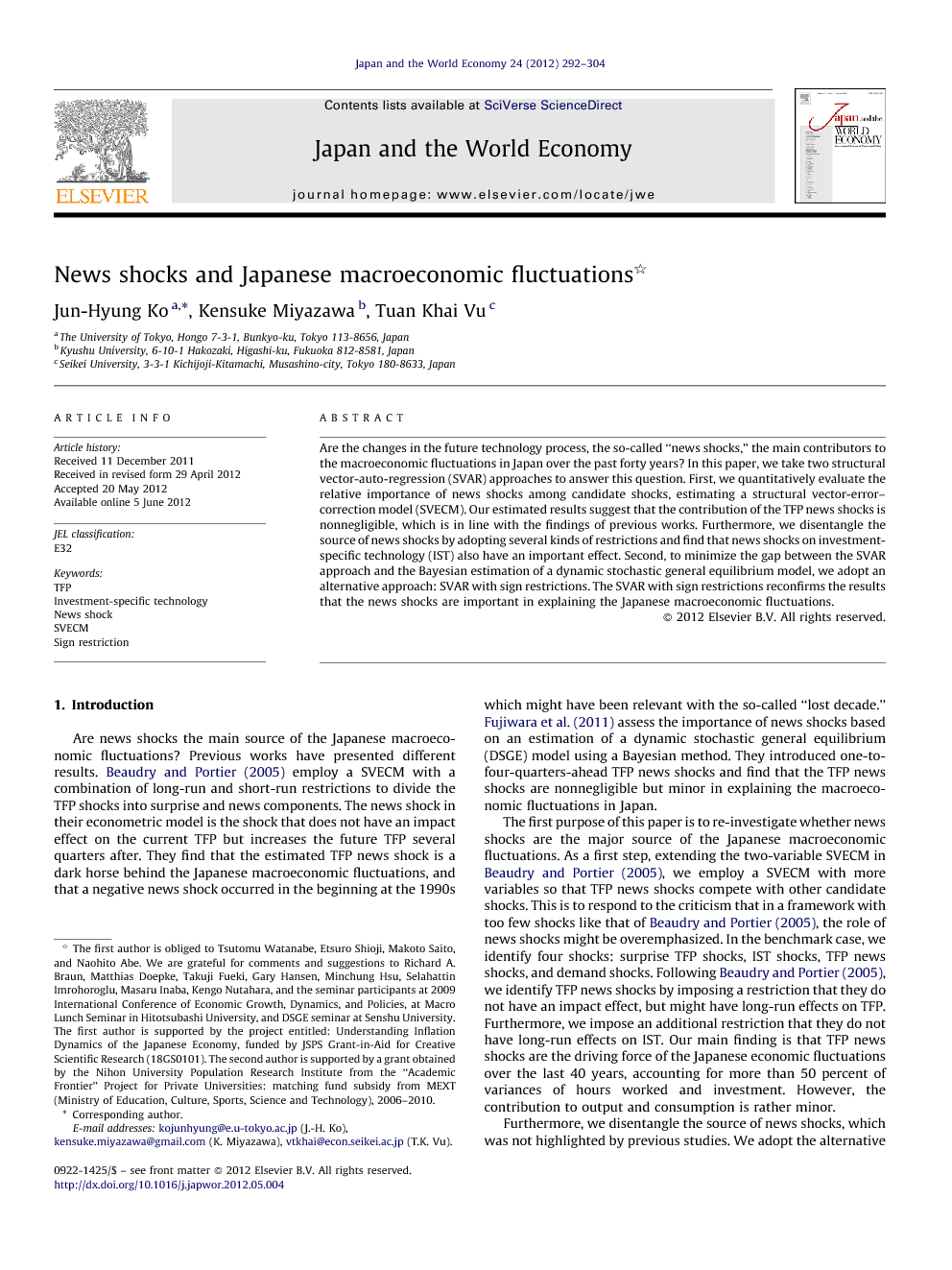 Are the changes in the future technology process, the so-called “news shocks,” the main contributors to the macroeconomic fluctuations in Japan over the past forty years? In this paper, we take two structural vector-auto-regression (SVAR) approaches to answer this question. First, we quantitatively evaluate the relative importance of news shocks among candidate shocks, estimating a structural vector-error–correction model (SVECM). Our estimated results suggest that the contribution of the TFP news shocks is nonnegligible, which is in line with the findings of previous works. Furthermore, we disentangle the source of news shocks by adopting several kinds of restrictions and find that news shocks on investment-specific technology (IST) also have an important effect. Second, to minimize the gap between the SVAR approach and the Bayesian estimation of a dynamic stochastic general equilibrium model, we adopt an alternative approach: SVAR with sign restrictions. The SVAR with sign restrictions reconfirms the results that the news shocks are important in explaining the Japanese macroeconomic fluctuations.

Are news shocks the main source of the Japanese macroeconomic fluctuations? Previous works have presented different results. Beaudry and Portier (2005) employ a SVECM with a combination of long-run and short-run restrictions to divide the TFP shocks into surprise and news components. The news shock in their econometric model is the shock that does not have an impact effect on the current TFP but increases the future TFP several quarters after. They find that the estimated TFP news shock is a dark horse behind the Japanese macroeconomic fluctuations, and that a negative news shock occurred in the beginning at the 1990s which might have been relevant with the so-called “lost decade.” Fujiwara et al. (2011) assess the importance of news shocks based on an estimation of a dynamic stochastic general equilibrium (DSGE) model using a Bayesian method. They introduced one-to-four-quarters-ahead TFP news shocks and find that the TFP news shocks are nonnegligible but minor in explaining the macroeconomic fluctuations in Japan. The first purpose of this paper is to re-investigate whether news shocks are the major source of the Japanese macroeconomic fluctuations. As a first step, extending the two-variable SVECM in Beaudry and Portier (2005), we employ a SVECM with more variables so that TFP news shocks compete with other candidate shocks. This is to respond to the criticism that in a framework with too few shocks like that of Beaudry and Portier (2005), the role of news shocks might be overemphasized. In the benchmark case, we identify four shocks: surprise TFP shocks, IST shocks, TFP news shocks, and demand shocks. Following Beaudry and Portier (2005), we identify TFP news shocks by imposing a restriction that they do not have an impact effect, but might have long-run effects on TFP. Furthermore, we impose an additional restriction that they do not have long-run effects on IST. Our main finding is that TFP news shocks are the driving force of the Japanese economic fluctuations over the last 40 years, accounting for more than 50 percent of variances of hours worked and investment. However, the contribution to output and consumption is rather minor. Furthermore, we disentangle the source of news shocks, which was not highlighted by previous studies. We adopt the alternative identification schemes in line with Beaudry and Lucke (2010), where the news shocks include the news on IST as well as on TFP. Comparing their results with our benchmark case, we can assess the relative importance of news shocks to TFP and IST. We find that IST news shocks are another crucial factor in explaining postwar Japanese business cycles. This feature is not observed in the U.S. data by Beaudry and Lucke (2010). Our second purpose is to compare the results of two different approaches: SVAR and the structural estimation of a DSGE model. Fujiwara et al. (2011) find that TFP news shocks play a minor role, explaining less than 10 percent of real macro activities in Japan. A direct comparison is difficult for several reasons. First, news shocks estimated by our SVECM are somewhat different from those in Fujiwara et al. (2011). Our estimated news shocks start to increase TFP around four to 32 periods after the stock market innovation, while the news shocks in Fujiwara et al. (2011) like other previous DSGE works are built until four periods ahead. Second, the treatment of the trend is different. In our SVECM, we assume the number of stochastic trends based on the Johansen cointegration test and explicitly incorporate the common cointegrating vector, while they examine the model around the deterministic trend. Third, Fujiwara et al. (2011) investigate only news shocks on TFP, while we also examine the role of IST news. Fourth, only four types of structural shocks are identified in our four-variable SVECM, while more types of shocks are identified in their DSGE estimation. Therefore, to narrow the gap between these two approaches, we employ an alternative approach: SVAR with sign restrictions. SVAR with sign restrictions has the following strengths. First, in contrast to the SVECM approach, the dependent variables do not have to be set in a (log) differenced form because we do not need to rely on the long-run restriction in this case. Therefore, the discrepancy originating from the trend assumptions can be resolved. Second, the actual timing of the future TFP increase can be modified. In the DSGE literature, the timing is around one to four periods ahead, while those of our estimated news shocks in SVECM are from four to 32 periods.1 Therefore, to identify the same types of news shocks in the VAR system, we follow the same assumptions made by the DSGE literature. Third, we are able to identify only a subset of the structural shocks and thus need to impose much fewer restrictions. This enables us to estimate a larger VAR with more variables. We estimate a seven-variable VAR model in level and identify news shocks as ones that increase TFP from one to four periods ahead. The estimated results under SVAR with sign restrictions lie between the results of our SVECM and those of Fujiwara et al. (2011), showing that the news shocks explain large portions of Japanese macroeconomic fluctuations. We also find that the contribution of news shocks is larger in the U.S. economy than in the Japanese economy. The rest of the paper is organized as follows. Section 2 describes the SVECM system and data. The identification procedure and benchmark results are presented in Section 3, while Section 4 discusses the source of the news shocks. Section 5 conducts a robustness check. Section 5 also compares the results for SVAR with sign restrictions with those in Fujiwara et al. (2011), and Section 6 concludes.

What is the driving source of Japanese business cycle fluctuations? We answer this fundamental question using a SVECM approach with the combination of long-run and short-run restrictions. We assess the relative importance of possible candidate shocks with all possible identification schemes that are consistent with standard macro models. Our main findings are as follows. First, the estimated TFP news shocks are important in explaining the variances of hours worked and investment, but play a somewhat smaller role in the cases of consumption and output. Therefore, our benchmark result lies between previous studies. Second, IST news shocks turn out to be the dark horse behind the Japanese business cycles. Therefore, the news shocks on both of future TFP and IST are capable of explaining most fluctuations in macro activities. Furthermore, the evidence also suggests that large portions of the bubble economy in the late 1980s and the stagnation in the early 1990s can be explained by news shocks. The surprise TFP shocks play some role in explaining output and consumption movement, but a negligible role in explaining hours worked and investment movement. As an alternative approach, we estimate a SVAR model with sign restrictions. Using a SVAR model with sign restrictions, we identify more specified news shocks consistent with the previous DSGE literature. We find that news shocks explain around 10–30 percent of macroeconomic fluctuations under this approach. This finding lies between our SVECM and Fujiwara et al. (2011). We also compare our results with those for the U.S. economy. The major differences between the business cycles of Japan and the U.S. are as follows. First, in the Japanese economy, we find the significant contribution of IST news shocks in the benchmark case; this was negligible in the U.S. business cycles in Beaudry and Lucke (2010). Second, the results of SVAR estimation with sign restrictions indicate that the contribution of news shocks is larger in the U.S. economy. In the future research, more specific identifications of all structural shocks based on SVAR with sign restrictions are possible. We only identify news shocks that replicate the TFP and IST processes observed in theory. We can apply the method to identify several kinds of news shocks and investigate the relationship between macro activities. It may be also possible to explore other types of news shocks such as the announcement effect of monetary and fiscal policies.