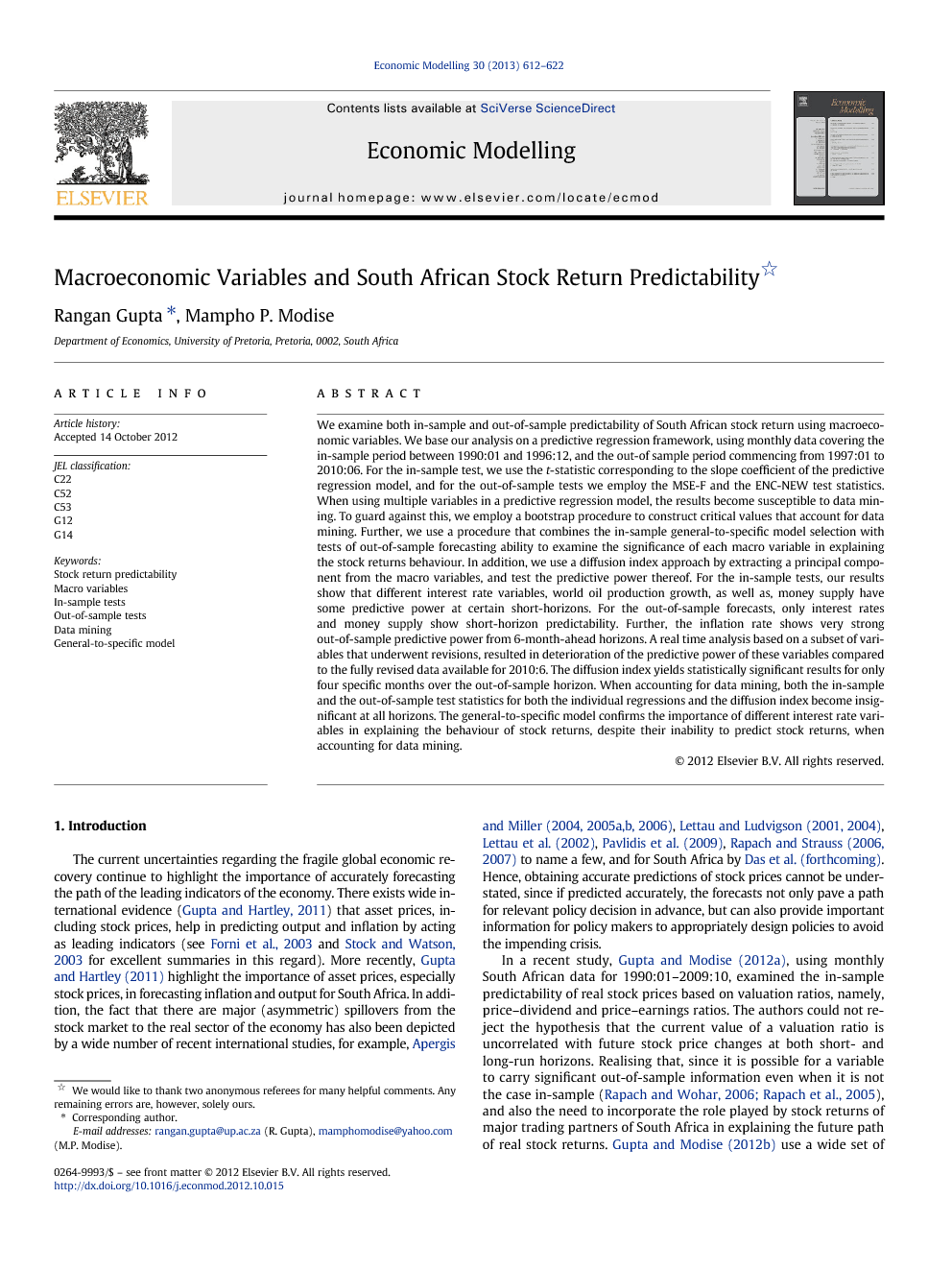 We examine both in-sample and out-of-sample predictability of South African stock return using macroeconomic variables. We base our analysis on a predictive regression framework, using monthly data covering the in-sample period between 1990:01 and 1996:12, and the out-of sample period commencing from 1997:01 to 2010:06. For the in-sample test, we use the t-statistic corresponding to the slope coefficient of the predictive regression model, and for the out-of-sample tests we employ the MSE-F and the ENC-NEW test statistics. When using multiple variables in a predictive regression model, the results become susceptible to data mining. To guard against this, we employ a bootstrap procedure to construct critical values that account for data mining. Further, we use a procedure that combines the in-sample general-to-specific model selection with tests of out-of-sample forecasting ability to examine the significance of each macro variable in explaining the stock returns behaviour. In addition, we use a diffusion index approach by extracting a principal component from the macro variables, and test the predictive power thereof. For the in-sample tests, our results show that different interest rate variables, world oil production growth, as well as, money supply have some predictive power at certain short-horizons. For the out-of-sample forecasts, only interest rates and money supply show short-horizon predictability. Further, the inflation rate shows very strong out-of-sample predictive power from 6-month-ahead horizons. A real time analysis based on a subset of variables that underwent revisions, resulted in deterioration of the predictive power of these variables compared to the fully revised data available for 2010:6. The diffusion index yields statistically significant results for only four specific months over the out-of-sample horizon. When accounting for data mining, both the in-sample and the out-of-sample test statistics for both the individual regressions and the diffusion index become insignificant at all horizons. The general-to-specific model confirms the importance of different interest rate variables in explaining the behaviour of stock returns, despite their inability to predict stock returns, when accounting for data mining.

In this paper, we examine the predictability of South African stock returns using 12 macro variables. The macro variables we consider include different interest rates, employment, inflation, money supply, industrial production, global oil production and crude oil price. We consider both in-sample (from 1990:01 to 1996:12) and out-of-sample (from 1997:01 to 2010:06) test statistics. For the in-sample tests we use the t-statistic corresponding to the slope coefficient and for our out-of-sample, we use the recently developed Clark and McCracken (2001) and McCracken (2004) tests, as these appear to be more powerful than other tests in the financial literature. We also summarise the information contained in the macro variables into one diffusion index. We also compare our results against data mining by using a data-mining-robust bootstrap procedure. We further combine the in-sample general-to-specific model selection with tests of out-of-sample forecasting ability to further examine the importance of these macro variables in explaining the behaviour of stock returns. Our results show that most interest rate variables included in the analysis exhibit in-sample and out-of-sample predictive ability, although at shorter horizons. For the real sector, only the world oil production and the narrowly defined money supply have some predictive power at certain horizons for the entire sample period. The inflation rate exhibits very strong predictive power over the medium- to long-run horizons for the out-of-sample period—suggesting that inflation is also directly influenced by external shocks. A real time analysis based on a subset of variables that underwent revisions, resulted in deterioration of the predictive power of these variables when compared to the fully revised data available for 2010:6. The diffusion index only exhibits some predictive power at only four specific months (1, 3, 6 and 24) over the out-of-sample horizon. When accounting for data mining, both the in-sample and the out-of-sample test statistics for the individual macro variable regressions and the diffusion index become insignificant at all horizons, suggesting that our strong evidence is due to data mining. The results confirm the findings by Inoue and Kilian (2002) that both in-sample and out-of-sample test statistics are susceptible to data mining biases. The results for the model that combines the in-sample general-to-specific model selection with tests of out-of-sample forecasting ability show that interest rate variables contain important information about the stock return behaviour in South Africa, despite their inability to predict stock returns for both in-sample and out-of-sample periods when accounting for data mining. Both the demand and the supply shock variables also contain crucial information for stock return behaviour, as at least one of these variables appears in every horizon (with an exception of the 3-month-ahead horizon). The results in the present paper, and that in Gupta and Modise, 2012a and Gupta and Modise, 2012b, tend to suggest that macroeconomic and financial variables do not seem to contain much information in predicting South African stock return in a linear predictive regression framework, especially when one accounts for data mining. The implication of this result is that, in a linear predictive regression framework, that South African stock market is efficient in that the lagged stock return is all one needs to forecast the future stock return. However, LeRoy (1973), using a dynamic portfolio model indicated that under general conditions, particularly relating to risk-aversion, the martingale property will be satisfied only as an approximation and that no rigorous theoretical justification for it can be obtained. In light of this, as part of future research, it would be interesting to analyse stock return predictability in a nonlinear framework, as in Gallagher and Taylor (2001), McMillan (2001), and Qi (1999).