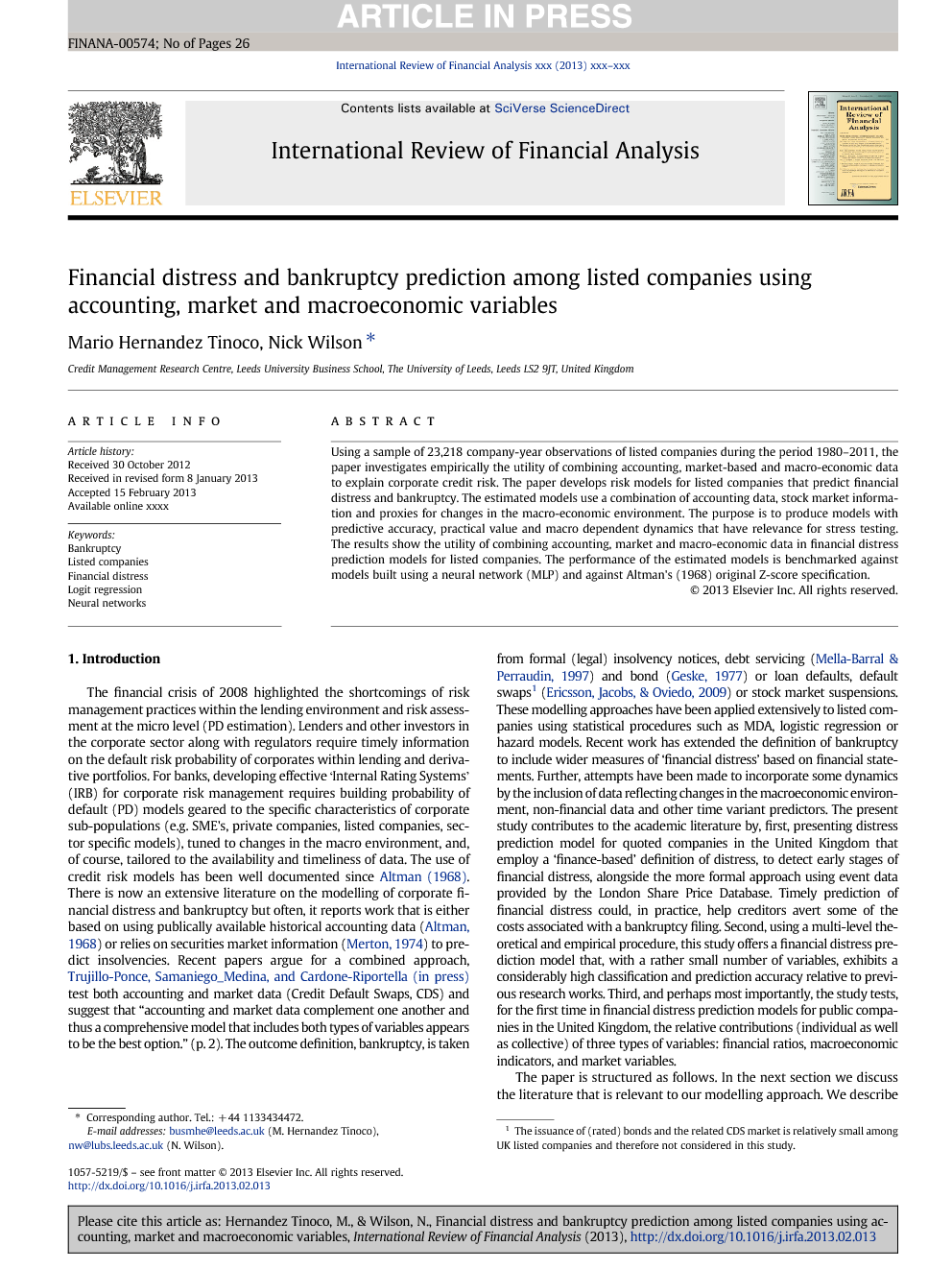 Using a sample of 23,218 company-year observations of listed companies during the period 1980–2011, the paper investigates empirically the utility of combining accounting, market-based and macro-economic data to explain corporate credit risk. The paper develops risk models for listed companies that predict financial distress and bankruptcy. The estimated models use a combination of accounting data, stock market information and proxies for changes in the macro-economic environment. The purpose is to produce models with predictive accuracy, practical value and macro dependent dynamics that have relevance for stress testing. The results show the utility of combining accounting, market and macro-economic data in financial distress prediction models for listed companies. The performance of the estimated models is benchmarked against models built using a neural network (MLP) and against Altman's (1968) original Z-score specification.

The financial crisis of 2008 highlighted the shortcomings of risk management practices within the lending environment and risk assessment at the micro level (PD estimation). Lenders and other investors in the corporate sector along with regulators require timely information on the default risk probability of corporates within lending and derivative portfolios. For banks, developing effective ʻInternal Rating Systemsʼ (IRB) for corporate risk management requires building probability of default (PD) models geared to the specific characteristics of corporate sub-populations (e.g. SME's, private companies, listed companies, sector specific models), tuned to changes in the macro environment, and, of course, tailored to the availability and timeliness of data. The use of credit risk models has been well documented since Altman (1968). There is now an extensive literature on the modelling of corporate financial distress and bankruptcy but often, it reports work that is either based on using publically available historical accounting data (Altman, 1968) or relies on securities market information (Merton, 1974) to predict insolvencies. Recent papers argue for a combined approach, Trujillo-Ponce, Samaniego_Medina, and Cardone-Riportella (in press) test both accounting and market data (Credit Default Swaps, CDS) and suggest that “accounting and market data complement one another and thus a comprehensive model that includes both types of variables appears to be the best option.” (p. 2). The outcome definition, bankruptcy, is taken from formal (legal) insolvency notices, debt servicing (Mella-Barral & Perraudin, 1997) and bond (Geske, 1977) or loan defaults, default swaps1 (Ericsson, Jacobs, & Oviedo, 2009) or stock market suspensions. These modelling approaches have been applied extensively to listed companies using statistical procedures such as MDA, logistic regression or hazard models. Recent work has extended the definition of bankruptcy to include wider measures of ‘financial distress’ based on financial statements. Further, attempts have been made to incorporate some dynamics by the inclusion of data reflecting changes in the macroeconomic environment, non-financial data and other time variant predictors. The present study contributes to the academic literature by, first, presenting distress prediction model for quoted companies in the United Kingdom that employ a ‘finance-based’ definition of distress, to detect early stages of financial distress, alongside the more formal approach using event data provided by the London Share Price Database. Timely prediction of financial distress could, in practice, help creditors avert some of the costs associated with a bankruptcy filing. Second, using a multi-level theoretical and empirical procedure, this study offers a financial distress prediction model that, with a rather small number of variables, exhibits a considerably high classification and prediction accuracy relative to previous research works. Third, and perhaps most importantly, the study tests, for the first time in financial distress prediction models for public companies in the United Kingdom, the relative contributions (individual as well as collective) of three types of variables: financial ratios, macroeconomic indicators, and market variables. The paper is structured as follows. In the next section we discuss the literature that is relevant to our modelling approach. We describe our database and measures of the outcome variable and set of explanatory variables. The estimation methodology is discussed along with analysis, results and conclusions.

This study offers a comparison of the classification accuracy and predictive power of three types of variables (financial statement ratios, macroeconomic indicators and market variables) in a logit model for quoted companies in the United Kingdom based on a financial definition of firm distress. It contributes to the default prediction literature by, first, using a finance-based definition of distress complemented with a technical approach built using information provided by the London Share Price Database. The advantage is that the definition of financial distress presented in this study is not contingent upon its ultimate legal consequence: bankruptcy, as in most of the previous prediction literature. A wider, ex ante approach is employed, in order to detect early stages of financial distress with a high degree of reliability that could be useful to practitioners to avert the high costs associated with a bankruptcy filing. Second, a large dataset was built merging different types of information from data sources widely used in the academic as well as in the industry fields. Therefore, this study relies not only on independent variables used in previous research works; but it also used a multi-level theoretical and empirical procedure to test and select the variables with the highest contribution to the overall accuracy of the model. Furthermore, the study presents, unlike most studies in the field of default prediction, a theoretically-based justification for the use of each of the retained variables in the final models. The result is a model for the prediction of financial distress in the United Kingdom for quoted companies that, with a small number of variables, displays a very high classification and prediction accuracy relative to previous research works. Third, and perhaps most importantly, the study tests, for the first time in financial distress prediction models for quoted companies in the UK, the relative contributions (individual and as groups) of the three types of variables to the predictive accuracy of the model: financial, macroeconomic and market variables. Prior research has tested the ability of market variables to predict bankruptcy employing methodologies such as the Black and Scholes contingent claims or option-based approach. However, the results obtained from these models (that entail numerous restrictive assumptions) have been controversial. Many efforts have been carried out to demonstrate the superiority of market-based models over accounting-based models and vice versa. To this point, the default prediction literature is characterised by a competing approach, where there is a clear division line between market and accounting variables. The present study adopts a different approach where the use of these types of variables is not mutually exclusive. It is tested whether the market variables (dependent, in some measure, upon the same financial information) add information that is not contained in financial statements and therefore act as complement in default prediction models. The results presented in this study clearly indicate that this is the case. The considerable increase of the Area Under the Receiver Operating Characteristics (ROC) Curve (among several other formal measures), from 0.88 to 0.92 in a model estimated in t − 1 and from 0.85 to 0.89 in a model estimated in t − 2, that followed the incorporation of market variables in an accounting model indicates that they contain information that is not included in financial statement ratios. A comparison of areas under correlated ROC curves performed using a non-parametric method, and the estimation of biased-adjusted classification tables confirmed these results. In addition, when a full model was estimated in t − 2 to test the real predictive accuracy of the model, three out of four market variables retained their statistical significance, the same proportion as the financial ratios, which indicates that the variables included in the model are consistent. Interestingly, Hosmer and Lemeshow goodness-of-fit tests for binary response logistic models suggest that the ‘full model’ fitted with market variables is an adequate model, unlike the ‘accounting only’ or ‘accounting plus macroeconomic variables’ model. On the other hand, results are less conclusive for macroeconomic variables, which contribute only marginally to the overall classification accuracy of the model. Finally, the estimation of marginal effects fills an important gap in the default prediction literature by presenting expected instantaneous changes in the response variable as function of a change in a specific predictor variable while keeping all the other covariates constant, which is very useful to the interpretation of the individual effects.