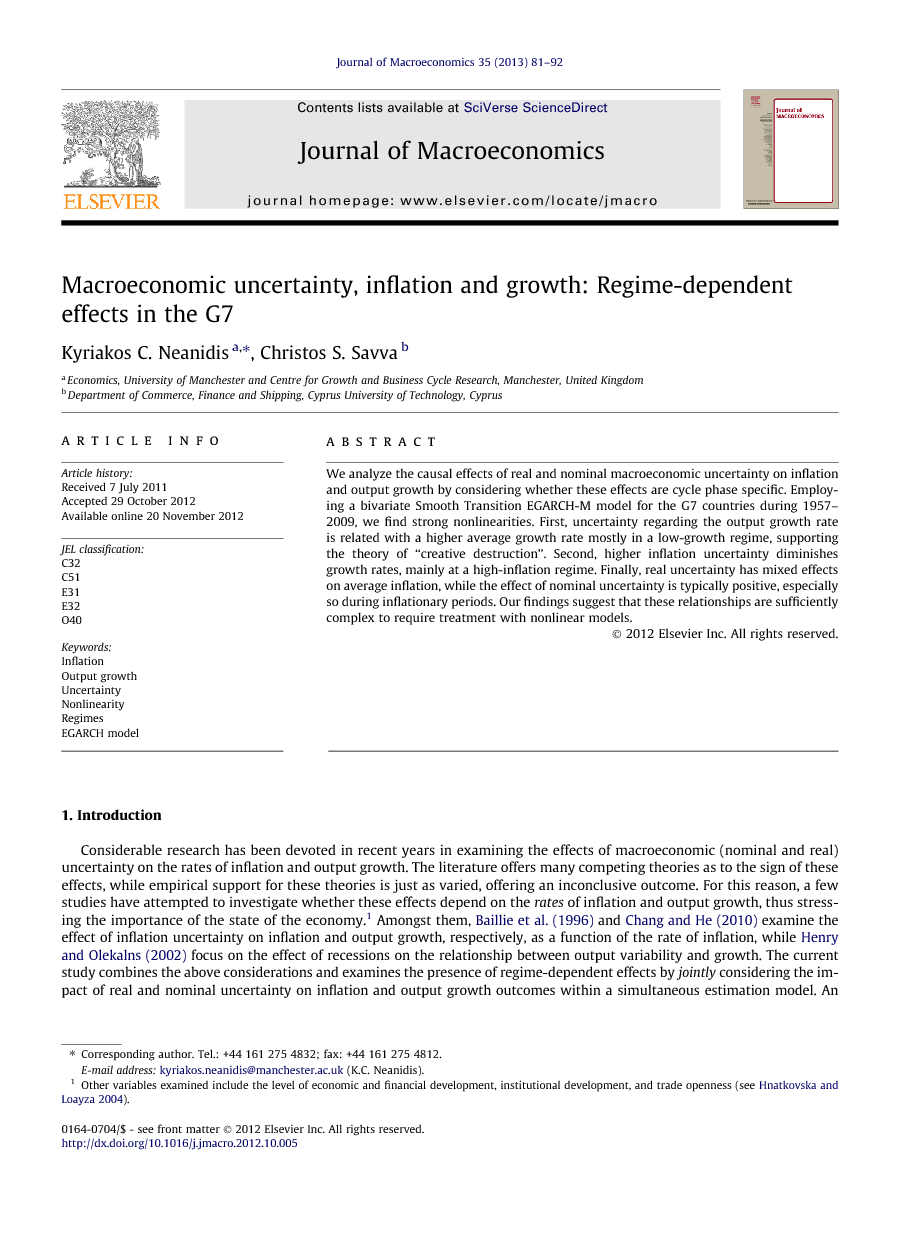 We analyze the causal effects of real and nominal macroeconomic uncertainty on inflation and output growth by considering whether these effects are cycle phase specific. Employing a bivariate Smooth Transition EGARCH-M model for the G7 countries during 1957–2009, we find strong nonlinearities. First, uncertainty regarding the output growth rate is related with a higher average growth rate mostly in a low-growth regime, supporting the theory of “creative destruction”. Second, higher inflation uncertainty diminishes growth rates, mainly at a high-inflation regime. Finally, real uncertainty has mixed effects on average inflation, while the effect of nominal uncertainty is typically positive, especially so during inflationary periods. Our findings suggest that these relationships are sufficiently complex to require treatment with nonlinear models.

In this paper, we develop an asymmetric bivariate Smooth Transition VAR EGARCH-M system of inflation and industrial production growth in the G7 countries. Our goal is to investigate the presence of nonlinearities in the effects of real and nominal uncertainty on average inflation and output growth. By making the effects conditional on the rate of inflation and the economy’s position along the business cycle, we find significant regime-switching effects. We can summarize our findings as follows. First, there is evidence that output growth uncertainty enhances mean output growth with the effect being mainly restricted in the low-growth regime during economic downturns. Second, higher inflation uncertainty diminishes output growth especially during high inflation periods. Third, output growth uncertainty has mixed effects on mean inflation with most economies experiencing a negative effect in one of the two growth regimes. Finally, there is a positive effect of inflation uncertainty on mean inflation for at least one of the regimes that mainly increases in size in inflationary periods. Our results are important as they demonstrate the existence of significant regime-dependent effects of real and nominal uncertainty on the rates of inflation and output growth. The introduction of switching regimes could explain why competing hypotheses about macroeconomic uncertainty provide varying degrees of support across countries. This would suggest that the empirical relationship between macroeconomic uncertainty and macroeconomic performance is quite complex and, thus, needs to account for nonlinearities. But, of course, the variation in the results across different (mainly industrialized) countries could also be due to country-specific characteristics. This would represent a valuable future research avenue.