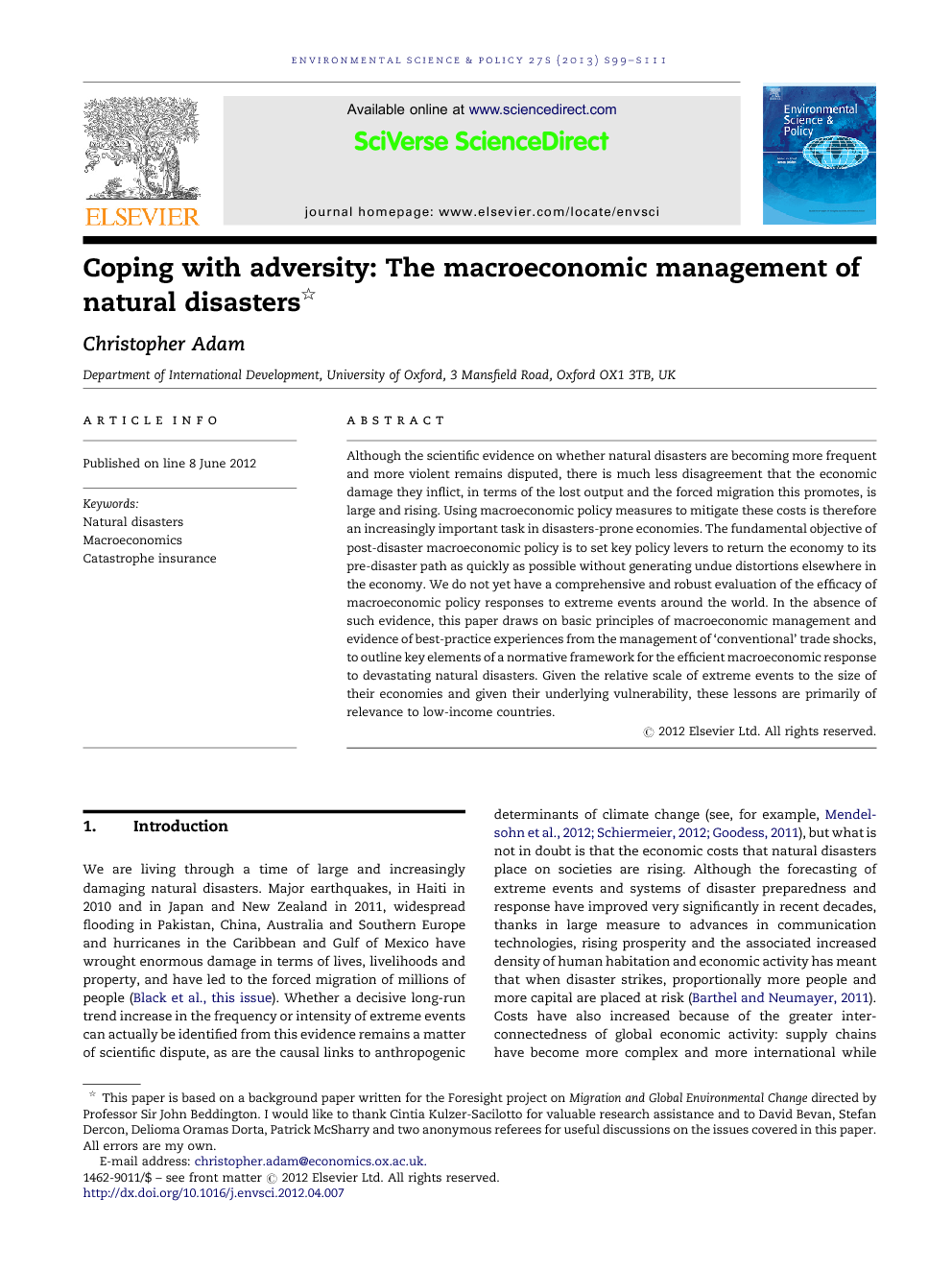 Although the scientific evidence on whether natural disasters are becoming more frequent and more violent remains disputed, there is much less disagreement that the economic damage they inflict, in terms of the lost output and the forced migration this promotes, is large and rising. Using macroeconomic policy measures to mitigate these costs is therefore an increasingly important task in disasters-prone economies. The fundamental objective of post-disaster macroeconomic policy is to set key policy levers to return the economy to its pre-disaster path as quickly as possible without generating undue distortions elsewhere in the economy. We do not yet have a comprehensive and robust evaluation of the efficacy of macroeconomic policy responses to extreme events around the world. In the absence of such evidence, this paper draws on basic principles of macroeconomic management and evidence of best-practice experiences from the management of ‘conventional’ trade shocks, to outline key elements of a normative framework for the efficient macroeconomic response to devastating natural disasters. Given the relative scale of extreme events to the size of their economies and given their underlying vulnerability, these lessons are primarily of relevance to low-income countries.

The threat to lives and livelihoods posed by natural disasters is increasing. The science of extreme events is contested, in particular whether changes in their frequency and severity can be linked to anthropogenic factors. But the economics is not: as countries get richer and more interconnected and as economic activity becomes more urbanized, disasters wreak much greater damage than they did in the past. This is particularly true of relatively poor countries, including emerging market economies, which are at the early stages of industrial take-off – when the process of capital accumulation and concentration is particularly rapid – but have less economic resilience and a more limited capacity to respond to such shocks. Investments in disaster preparedness and disaster management has advanced substantially in recent decades (see for example World Bank, 2010) but the benefits of these investments will depend substantially on how well countries configure their macroeconomic policy instruments, both in anticipation and response to extreme events. Three main conclusions emerge from this paper. First, effective macroeconomic management cannot, in general, lessen the scale of the impact but it can help determine how quickly the economy can recover and at what social cost, including the costs of dislocation and induced migration. Second, however, whilst the ‘first principles’ arguments developed in this paper are persuasive, we do not yet have a substantial body of literature on the macroeconomic management of disasters nor do we have anything approaching a robust basis for the evaluation of policy responses that have occurred in response to natural disasters, either by domestic policy makers or donors, or both. This is a major gap in our knowledge. The returns to systematically building and evaluating this evidence are likely to be high and, as a global public good, should be a priority area for the international community, most obviously the International Monetary Fund. Third, however, in the absence of this kind of evidence, this paper has sought to show how some basic principles combined with evidence of best-practice from the management of trade shocks, which share some common characteristics with natural disasters, can be used to lay the foundations of a normative framework for the efficient macroeconomic response to devastating natural disasters. In doing so, it focuses on the role of fiscal, trade and monetary policy measures in bringing the economy back to its trend growth path. An important theme of this analysis is encapsulated in the adage “adjust if you must but finance if you can”, but the reality for many low income countries is that conventional debt financing, either from domestic or external markets, is likely to dry up just at the point it is required: official external finance will therefore continue to be important, but the returns to putting in place effective ex ante financing mechanisms, including through conventional and new insurance mechanisms is likely to be high.