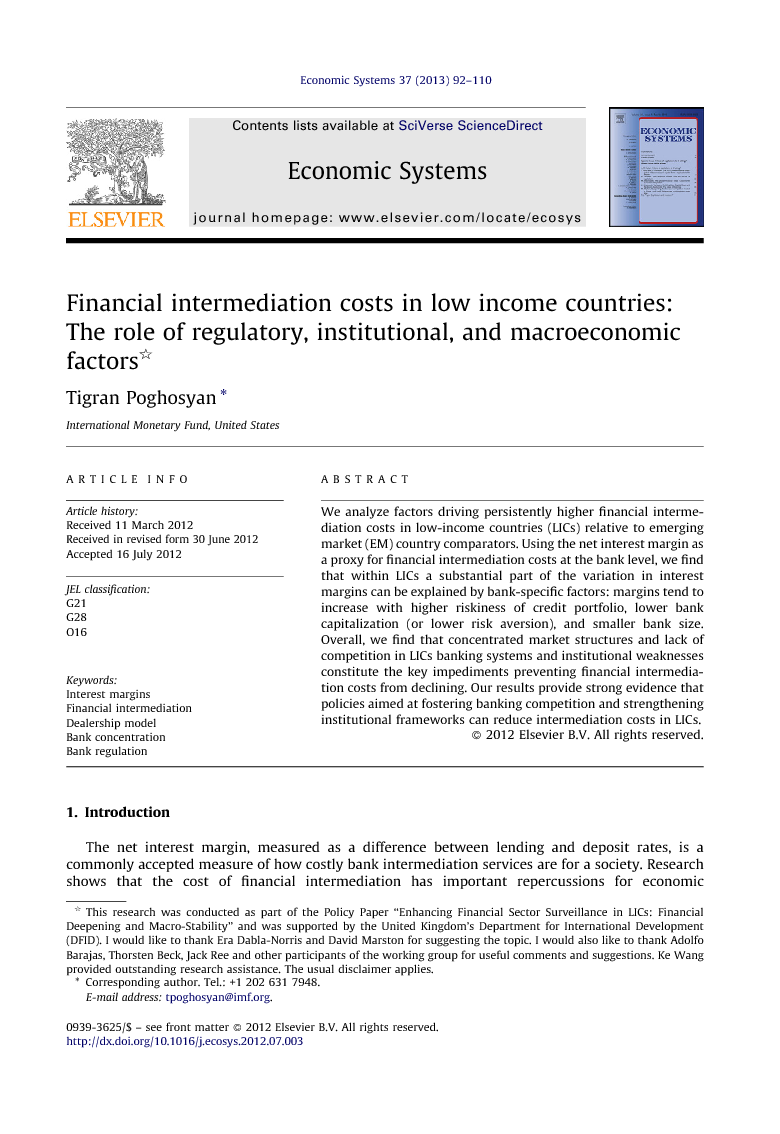 The net interest margin, measured as a difference between lending and deposit rates, is a commonly accepted measure of how costly bank intermediation services are for a society. Research shows that the cost of financial intermediation has important repercussions for economic performance (Jayaratne and Strahan, 1996, Rajan and Zingales, 1998 and Beck et al., 2000). The importance of the bank interest margin as a measure of financial intermediation costs is particularly pertinent for low-income countries (LICs), where in the absence of developed stock markets firms largely depend on bank financing as a source of external funding. High financial intermediation costs may constitute an important impediment for financial deepening in LICs. The persistence of high margins might be symptomatic of a number of systemic problems, such as: lack of competition, perceived market and credit risks, bank unsoundness, scale diseconomies constrained by small markets, high operating costs due to low efficiency, unfavorable institutional environment, and existence of various regulatory constraints distorting financial market activity. The main objective of this paper is to examine the influence of market concentration, bank regulations, institutional development, and macroeconomic environment on bank margins across a broad cross-section of LICs and emerging economies (EMs) while controlling for bank-specific factors. We use bank-level data on 359 commercial banks in 48 LICs, and 2535 commercial banks in 67 EMs for the period 1996–2010. For both groups of countries, the sample includes great diversity in terms of financial intermediation costs and bank characteristics as well as regulation, institutional, and macroeconomic environments. The comparison of results across the two groups of countries helps identify key environmental factors that put upward pressure on financial intermediation costs. Based on the results of the analysis, we provide policy recommendations for reducing financial intermediation costs in LICs and contributing to further financial deepening. Estimation results suggest that concentrated market structures and lack of competition in LICs’ banking systems remain key impediments preventing financial intermediation costs from declining. In this respect, relaxing restrictions to bank entry could help in reducing the cost of financial intermediation in LICs. Poor institutions also play a prominent role in boosting margins. Within LICs, bank-specific characteristics explain a substantial part of variation in interest margins. Specifically, margins tend to increase with higher riskiness of the credit portfolio, lower bank capitalization (or lower risk aversion), and smaller bank size. The rest of the paper is structured as follows. Section 2 decomposes the interest margin in LICs’ banks into its cost and profit components. Section 3 introduces an econometric specification based on a behavioral model of a profit-optimizing bank and evaluates the importance of bank-specific and country-specific determinants of the margin (macroeconomic, institutional, and regulatory environment). Section 4 presents robustness check results. The last section concludes.

This paper examined the determinants of interest margins in LICs and EMs, given the importance of high financial intermediation costs as an impediment for financial deepening in LICs. The paper adopts two complementary approaches to explore interest margin determinants: (i) an accounting framework for decomposing the interest margin into its cost and profit components; and (ii) an econometric specification based on the behavioral (dealership) model of profit-maximizing banks. The analysis provides evidence on the significantly higher interest margins in LICs compared to EMs. Decomposition of the margins into their cost and profit components indicates that the higher median margin in LICs is mainly explained by the greater profitability of banks (which may be due to a less competitive environment) and higher credit risk (which may reflect a weaker environment). The econometric analysis further highlights differences between LICs’ and EMs’ banks. Compared to EMs, margins in LICs’ banks appear to be more responsive to the market structure, suggesting that promoting banking competition can be an important tool to reduce interest margins in LICs. Furthermore, the positive impact of market structure on LICs’ margins is robust to different measures of market concentration. On the other hand, margins in LICs’ banks are less responsive to the macroeconomic environment compared to their EMs peers. In both groups of countries, the institutional setting appears to have a dominant impact on margins, overshadowing that of market concentration and many bank-specific controls. Finally, bank characteristics explain a substantial part of within-country variation in interest margins once country-specific determinants are accounted for. Specifically, margins in both LICs and EMs increase with higher riskiness of the credit portfolio, lower bank capitalization (or lower risk aversion), and smaller bank size. Taken together, these findings provide strong evidence that there is a large scope to reduce interest margins in LICs through policies aimed at fostering banking competition. On the regulatory side, relaxing restrictions to bank entry could help in lowering intermediation costs. More importantly, improvements in the informational, contractual and enforcement frameworks could play a key role in lowering interest margins in LICs.