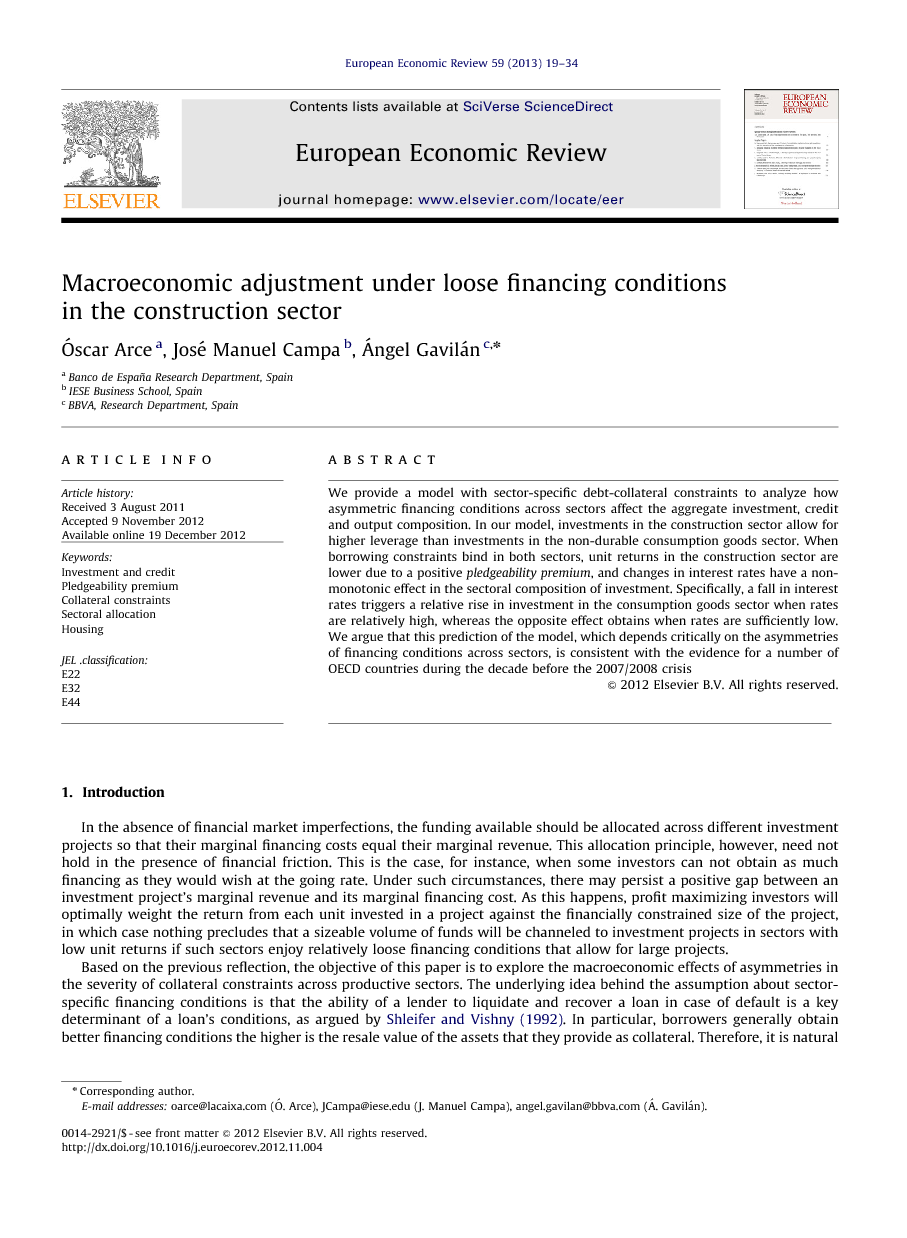 We provide a model with sector-specific debt-collateral constraints to analyze how asymmetric financing conditions across sectors affect the aggregate investment, credit and output composition. In our model, investments in the construction sector allow for higher leverage than investments in the non-durable consumption goods sector. When borrowing constraints bind in both sectors, unit returns in the construction sector are lower due to a positive pledgeability premium, and changes in interest rates have a non-monotonic effect in the sectoral composition of investment. Specifically, a fall in interest rates triggers a relative rise in investment in the consumption goods sector when rates are relatively high, whereas the opposite effect obtains when rates are sufficiently low. We argue that this prediction of the model, which depends critically on the asymmetries of financing conditions across sectors, is consistent with the evidence for a number of OECD countries during the decade before the 2007/2008 crisis

How aggregate investment is allocated across different productive sectors is a key determinant of economic fluctuations and long run growth. This paper analyzes how investment is allocated when investors in the construction sector may pledge a higher fraction of their projects as collateral than investors in the non-durable consumption goods sector. In our setting, when collateral constraints bind in both sectors, unit returns in the construction sector are lower due to a positive pledgeability premium. This goes hand in hand with a form of oversupply in that sector that is due to the relatively higher leverage allowed in construction investment projects. From the point of view of investors, such a pledgeability premium gives rise to a trade-off between lower unit returns but larger projects in the construction sector, and larger unit rents but smaller projects in the consumption sector. Which of these forces dominates depends on the interest rate. Specifically, a fall in interest rates triggers a relative rise in investment in the consumption goods sector when rates are relatively high, whereas the opposite effect obtains when rates are sufficiently low. That is, when interest rates are already low, a further reduction triggers a shift of investors towards the construction sector in search for large projects (with high leverage) even at the expense of lower unit profitability. In the end, the aggregate effect of interest rates on investors' decisions and on investment and credit equilibrium allocations is non-monotonic. We further find that the previous effects of the interest rate on the aggregate investment mix are strongly affected by the level of the demand for housing. In particular, for a given interest rate, an economy is more (less) likely to be in the region where declines in the cost of external financing reallocate entrepreneurs towards the housing sector, the higher (lower) is the aggregate housing demand. Using data from a number of OECD countries for the period 1995–2006, we show that the core predictions of the model – the potential for a non-monotonic response of macro aggregates given a sustained fall in interest rates and the cross-effects between interest rates and housing demand – are consistent with the evidence.