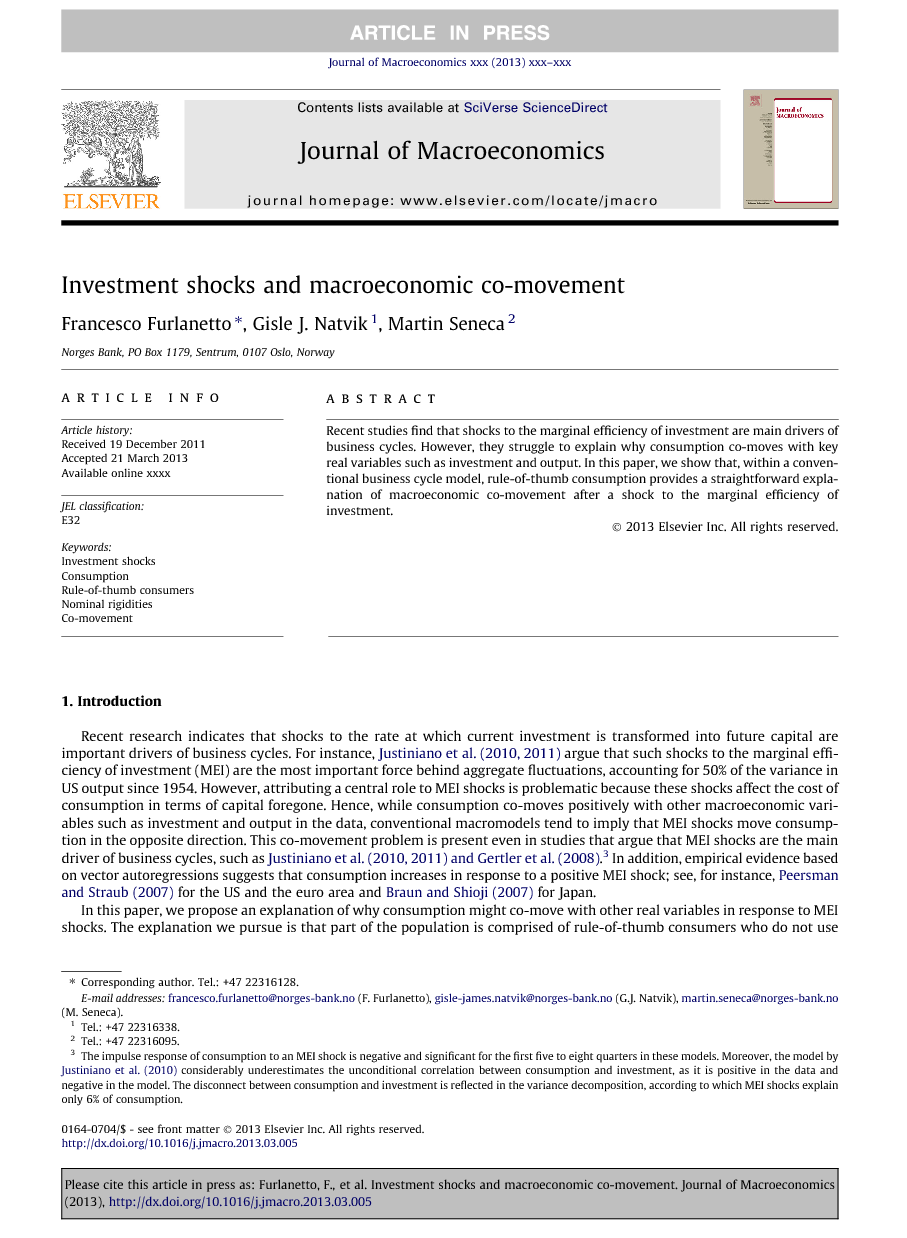 Recent studies find that shocks to the marginal efficiency of investment are main drivers of business cycles. However, they struggle to explain why consumption co-moves with key real variables such as investment and output. In this paper, we show that, within a conventional business cycle model, rule-of-thumb consumption provides a straightforward explanation of macroeconomic co-movement after a shock to the marginal efficiency of investment.

Recent research indicates that shocks to the rate at which current investment is transformed into future capital are important drivers of business cycles. For instance, Justiniano et al., 2010 and Justiniano et al., 2011 argue that such shocks to the marginal efficiency of investment (MEI) are the most important force behind aggregate fluctuations, accounting for 50% of the variance in US output since 1954. However, attributing a central role to MEI shocks is problematic because these shocks affect the cost of consumption in terms of capital foregone. Hence, while consumption co-moves positively with other macroeconomic variables such as investment and output in the data, conventional macromodels tend to imply that MEI shocks move consumption in the opposite direction. This co-movement problem is present even in studies that argue that MEI shocks are the main driver of business cycles, such as Justiniano et al., 2010, Justiniano et al., 2011 and Gertler et al., 2008.3 In addition, empirical evidence based on vector autoregressions suggests that consumption increases in response to a positive MEI shock; see, for instance, Peersman and Straub (2007) for the US and the euro area and Braun and Shioji (2007) for Japan. In this paper, we propose an explanation of why consumption might co-move with other real variables in response to MEI shocks. The explanation we pursue is that part of the population is comprised of rule-of-thumb consumers who do not use financial markets to smooth consumption, instead spending their entire disposable income each period. We build our analysis on the model used by Galí, López-Salido, and Valles (GLV, hereafter) (2007) to explain how government spending can stimulate private consumption, extended with sticky wages, as in Furlanetto, 2011 and Furlanetto and Seneca, 2012. As in standard models, when the economy is hit by an MEI shock, agents who trade in financial markets cut consumption to finance investment. Rule-of-thumb agents, in contrast, increase their consumption because the MEI shock stimulates labour income. Hence, if the share of rule-of-thumb agents is large enough, aggregate consumption may increase. A central feature of our model is nominal rigidity. Nominal rigidities effectively work to shift the labour demand schedule up following a positive MEI shock, as they prevent firms from increasing prices and workers from increasing wages. This feature allows consumption to increase along with investment, output, and hours worked following the shock. Although price rigidity alone may allow rule-of-thumb consumption behaviour to generate co-movement following an MEI shock, co-movement can be achieved for a much larger subset of the parameter space if both prices and wages are rigid. We include nominal wage rigidity for other reasons as well. In addition to its empirical justification, wage stickiness has proven to be particularly important in models with rule-of-thumb consumers as equilibrium dynamics are highly sensitive to other model-specific assumptions when wages are flexible, as emphasised by Colciago, 2011 and Natvik, forthcoming. In addition, we show that the inclusion of wage stickiness leads to an aggregate consumption Euler equation in a model with rule-of-thumb behaviour that is observationally different from the Euler equation arising from a model in which preferences are non-separable in consumption and leisure. This finding is interesting because non-separability has previously been proposed as an explanation of macroeconomic co-movement.4 Beyond providing a simple explanation of positive co-movement of consumption with other key variables after MEI shocks, our results contribute to the literature on rule-of-thumb consumers in macroeconomic models. Previous studies have primarily focused on explaining the effects of fiscal shocks (GLV, 2007; Mankiw, 2000) and neutral technology shocks (Furlanetto and Seneca, 2012), as well as the monetary policy stance required to prevent equilibrium indeterminacy (Galí et al., 2004, Bilbiie, 2008, Natvik, 2009 and Motta and Tirelli, 2012). As recent evidence from estimated models points toward MEI shocks as the main driver of business cycles, our finding is potentially the most important reason to account for rule-of-thumb behaviour in macroeconomic models. The paper is organised as follows. Section 2 briefly presents the model, and Section 3 describes its parameterisation. The results are presented in Section 4. Section 5 discusses the role of wage rigidity. Section 6 concludes.

We have shown that rule-of-thumb behaviour can explain why consumption and investment co-move after shocks to the marginal efficiency of investment. This feature can potentially improve the empirical performance of standard New Keynesian models, which struggle to account for co-movement patterns observed in the data. Because recent evidence points to MEI shocks as the historically most important driver of business cycles, our finding constitutes an additional reason why rule-of-thumb behaviour should be accounted for in macroeconomic models, beyond its role in the transmission of fiscal and technology shocks emphasised elsewhere.