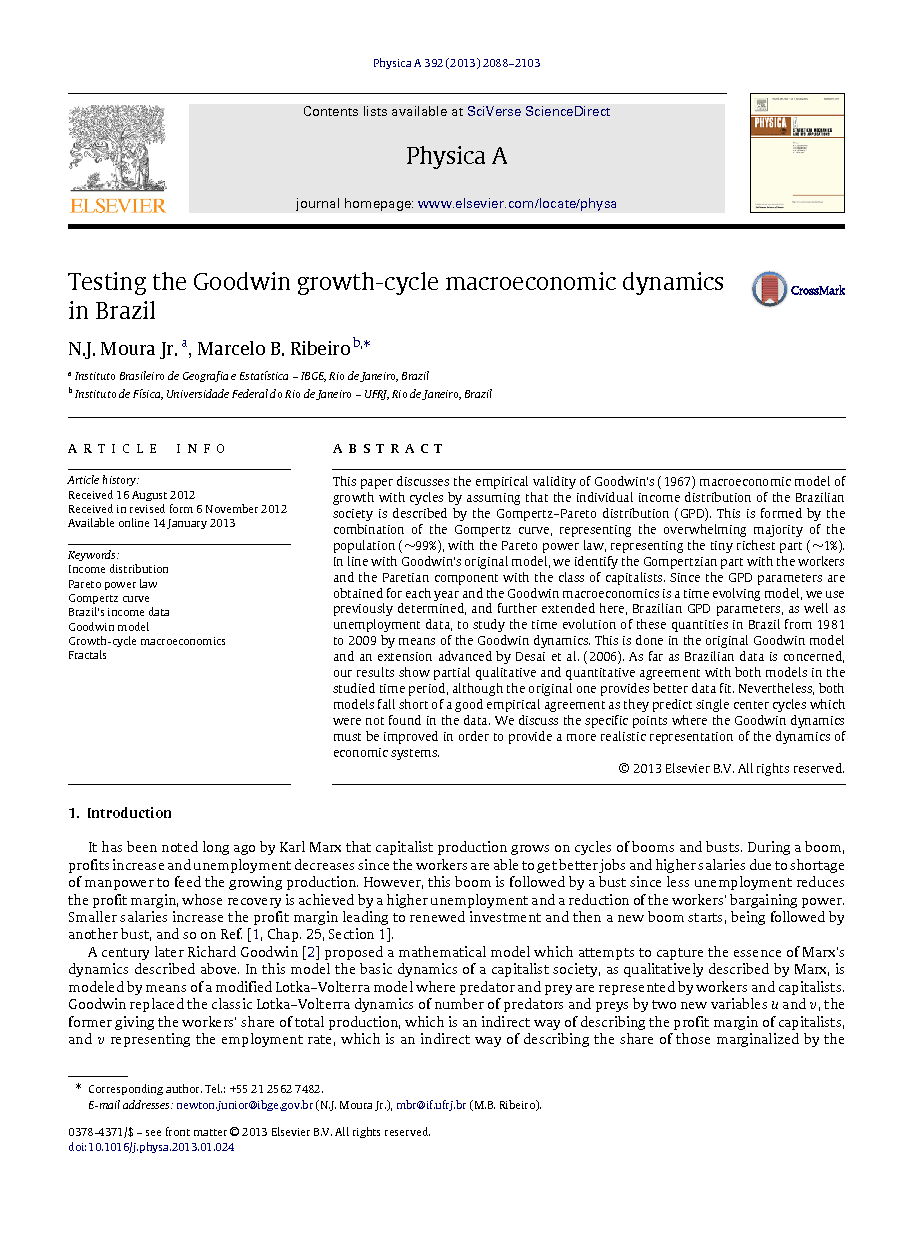 This paper discusses the empirical validity of Goodwin’s (1967) macroeconomic model of growth with cycles by assuming that the individual income distribution of the Brazilian society is described by the Gompertz–Pareto distribution (GPD). This is formed by the combination of the Gompertz curve, representing the overwhelming majority of the population (∼99%), with the Pareto power law, representing the tiny richest part (∼1%). In line with Goodwin’s original model, we identify the Gompertzian part with the workers and the Paretian component with the class of capitalists. Since the GPD parameters are obtained for each year and the Goodwin macroeconomics is a time evolving model, we use previously determined, and further extended here, Brazilian GPD parameters, as well as unemployment data, to study the time evolution of these quantities in Brazil from 1981 to 2009 by means of the Goodwin dynamics. This is done in the original Goodwin model and an extension advanced by Desai et al. (2006). As far as Brazilian data is concerned, our results show partial qualitative and quantitative agreement with both models in the studied time period, although the original one provides better data fit. Nevertheless, both models fall short of a good empirical agreement as they predict single center cycles which were not found in the data. We discuss the specific points where the Goodwin dynamics must be improved in order to provide a more realistic representation of the dynamics of economic systems.

In this paper we have studied the empirical validity of the model of economic growth with cycles advanced by Goodwin [2] and [3] and one of its specific variations, the Desai–Henry–Mosley–Pemberton (DHMP) extension [9], using Brazilian income data from 1981 to 2009. The variables used by Goodwin in his model, the workers’ share of total production uu and employment rate vv were obtained by describing the individual income distribution by the Gompertz–Pareto distribution (GPD) [27], formed by the combination of the Gompertz curve, representing the overwhelming majority of the population (∼99%), with the Pareto power law, representing the tiny richest part (∼1%) [26]. We identified the Gompertzian part of the distribution with the workers and the Paretian component with the class of capitalists and used GPD parameters obtained for each year in the studied time period to analyze the time evolution of these variables by means of the Goodwin dynamics. Unemployment data was also obtained from income distribution so that all variables come from the same sample since Brazilian unemployment data was collected under different methodologies during the time span analyzed here. The results were, however, mixed, both qualitatively and quantitatively. The data showed clockwise cycles in the u–vu–v phase space in agreement with the model, but those cycles were only largely clockwise and the orbital center was not unique, results which brought only partial qualitative agreement of the model with Brazilian data. We obtained temporal variations of the variables and their derivatives and carried out straight line fittings to the points formed with these quantities, both in the original Goodwin model and its DHMP extension in order to obtain fitting parameters which were compared with predictions of both models. In this respect the original model was able to provide a better empirical consistency, but the observed parameters were different from what the model predicts in the sense of their general behavior, leading to fitted lines whose slopes had opposite behavior than the theory states. A similar situation occurred with the DHMP extension, but in this case the uncertainties in the fitted parameters were too large, leading to mostly inconclusive results. Although a general predator–prey like behavior was observed, the lack of a single orbital center and parameters behaving very differently from what was anticipated bring into question the economic hypotheses used by Goodwin in deriving his model. It appears that they may be inapplicable to the economic system under study, a conclusion which comes as no surprise in view of the extremely simple specifications of the model, as discussed in Section 2.4. Considering these results, in order to provide a viable representation of the real world the Goodwin model must be modified. Firstly, as it is obvious from our results, as well as the ones obtained by previous authors, there cannot be a single orbital center. We can envisage two possible reasons for such a result: (i) the “constants” of the model may not be constants at all, but time variables; (ii) the right-hand side of Eqs. (6) and (7) are too simple and may require more terms involving the two variables, which means giving up the linear approximation of Eqs. (23) and (29). In other words, going to a fully nonlinear modeling. Secondly, the emphasis so far given by several studies on the economic foundations of the model, which have been the main source for its proposed theoretical modifications, should be put aside, at least temporarily, in favor of devising differential equations capable of reproducing the observed features, like the moving orbital centers and the behavior of the graphs with the temporal variations of uu and vv. Clearly those economic hypotheses will need to be revised as they produce a model which does not agree with the data, but these revisions must be made in the light of empirical results and not solely by theoretical introspection. Possibly new variables representing other economic players, like debt and government policy, may have to be introduced in the model, which means that, perhaps, more than two coupled differential equations would be necessary to define the economic system. In this respect, as discussed by Keen [18], Hudson [41] and Hudson & Bezemer [42], investment is not profit, being debt-financed when it exceeds profit, and government taxation has to be deduced from output to determine profit. Thirdly, since the DHMP model fared much more poorly as compared to the original model, Occam’s razor dictates that these modifications must be focused in the latter rather than the former because the original model is simpler. So, developing more complex models without a clear empirical motivation, and in the absence of a clear guidance given by real-data observations, goes against Occam’s razor. The basic motivation behind these proposed modifications comes from the realization that in its present state the Goodwin model does not provide much more explanatory power beyond the original qualitative ideas advanced by Marx. This is so because it is essentially a mathematical dressing of Marxian ideas by means of a predator–prey set of first order differential equations, but which produces solutions that clearly contradict empirical data in many respects and provides only general qualitative agreement with real-world observations. Therefore, the real challenge lies in devising a model that addresses real-world data and is capable of surviving empirical verification. One must always keep in mind that the good scientific practice entails a permanent search of convergence between hypotheses and evidences.