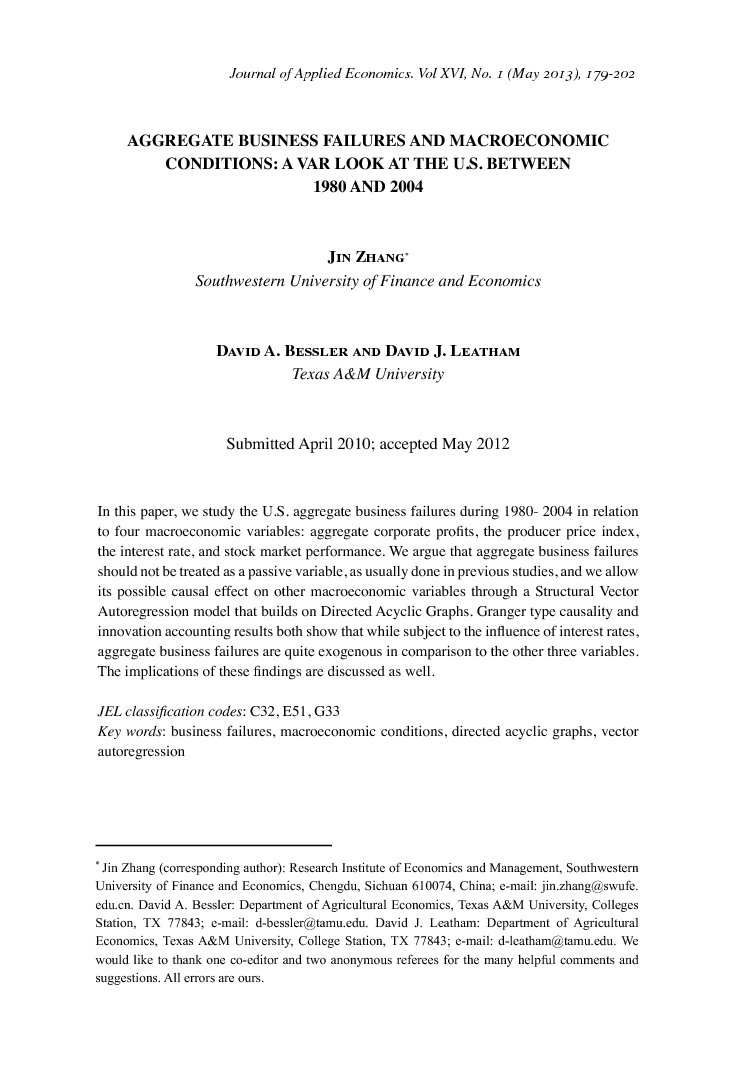 In this paper, we study the U.S. aggregate business failures during 1980- 2004 in relation to four macroeconomic variables: aggregate corporate profits, the producer price index, the interest rate, and stock market performance. We argue that aggregate business failures should not be treated as a passive variable, as usually done in previous studies, and we allow its possible causal effect on other macroeconomic variables through a Structural Vector Autoregression model that builds on Directed Acyclic Graphs. Granger type causality and innovation accounting results both show that while subject to the influence of interest rates, aggregate business failures are quite exogenous in comparison to the other three variables. The implications of these findings are discussed as well.

The issue of business failures (or bankruptcies, interchangeably) has drawn extensive attention over the past half century, which is not surprising given the huge costs usually associated with business failures. The vast majority of the literature on this issue deal with business failures at the micro level, especially the prediction of individual business failures based on firm-specific information. At the macro level, there is a line of research that addresses the overall business failures in an economy and its relationship with other macroeconomic conditions, but it is far less extensive than those at the micro level, both theoretically and empirically. The macro line of research on business failures was started by Altman (1971, 1983). In his studies, Altman first identified a set of macro variables that are likely to cause the failure of individual firms, including economic growth, credit or money market conditions, stock market activity, and business population characteristics. He then tested the possible causal effects on aggregate business failures in a distributed-lag regression model based on U.S. data. Since then, others have updated the research along this line, including Rose, Andrews, and Giroux (1982), Hudson (1986), Wadhwani (1986), Melicher and Hearth (1988), Platt and Platt (1994), and more recently, Liu (2004, 2009). Roughly speaking, these empirical studies have reached a consensus on the effects of certain variables on business failures, notably, corporate profits and interest rates. However, they have conflicting opinions on other variables, especially the price level and stock market performance. The potential reasons for differing results range from different samples (different periods in different countries, hence potentially different economic structures and institutional backgrounds) to the conceptual frameworks, and methodology adopted. In this study, we re-examine the relationship between business failures and macroeconomic conditions for the case of the United States. As a first motivation of this study, we examine the post-1980 period to provide a more recent and relevant coverage. Unlike other economic events or variables, bankruptcy, either personal or business, is also a legal phenomenon, governed directly by corresponding legal procedures. Aggregate business failures are inevitably subject to the influence of changes in legal systems (see Liu 2004 for the empirical evidence in the case of the U.K.). Since the early 20th century, the U.S. bankruptcy legal system was defined first by the Bankruptcy Act of 1938. Then the Bankruptcy Reform Act of 1978 came into effect and changed the legal environment of bankruptcysubstantially. Among the limited studies on the U.S. case, however, no paper has effectively covered the issue for the period since 1980. To reflect a more relevant reality, we choose to study the relationship between business failures and macro conditions for the period from 1980 to 2004. On one end, we choose 1980 as the beginning because it is the first year following the passage of the Bankruptcy reform Act of 1978 on October 1, 1979. On the other end, we choose not to extend the coverage beyond 2004, to avoid the complication (structural change) that may be caused by the more restrictive bankruptcy code (the Bankruptcy Abuse Prevention and Consumer Protection Act of 2005) and the turbulent financial crisis that immediately followed. Second, as a further motivation, we feel that the approach usually followed in the existing literature emphasizes the one-way causality from other variables to aggregate business failures, but the reverse causality from aggregate business failures is largely ignored, which leaves the whole picture incomplete. Since Altman (1971), studies in this context usually begin with an intention to find what determines business failures, and macro variables are identified as potential determinants if they are believed to influence the failure of individual firms. The issue is, even if the causality from macro variables to individual business failures is true, it is questionable whether we can apply this relationship to the macro level, i.e., to aggregate business failures. By using the macro conditions thus identified as the right-hand-side variables and estimating their effects on aggregate business failures with the usual regression methods, the potential exogeneity of aggregate business failures or its causal flows to other variables is a priori ruled out. Conceptually, aggregate business failure may not be such a passive variable; instead, it may play a proactive role in the overall economy (Bernanke 1981). Therefore, a more flexible framework should be employed to allow for this possibility. The more flexible framework we employ in this study is Vector Autoregression (VAR) that builds on a data-determined identification from Directed Acyclic Graphs (DAG). VAR (Sims 1980) is an econometric framework flexible enough in the sense that all variables considered are treated as potentially endogenous. Only minimal assumption on structure is needed, which makes VAR a good candidate for the issue at hand, given that the causal structures among variables are unclear. To date, VAR has not been used to study this issue, except in Liu (2009) wherein the case of the U.K. was studied in the setting of Vector Error Correction (VEC). For VAR to be useful for policy analysis, the underlying structure has to be identified, and the identification methods of Choleski and Structural VAR (SVAR;Sims 1986; Bernanke 1986) have been widely used. Rather than following these two approaches, we rely on DAG and the inductive causality algorithms to provide a “data-driven” causal structure for identification. With an origin in artificial intelligence and computer science, this “data-driven” approach does not make a prior assumption on causal structure, but instead produces the structure from data. Therefore, this approach may produce a more objective analysis than those based on Choleski decomposition or a structural model based on subjective grounds (Swanson and Granger 1997). In the remainder of this paper, Section II introduces the conceptual framework and data. A description of econometric methods follows in Section III. Section IV presents the empirical implementation, as well as the results and discussions. Section V concludes.

Previous studies typically sought to determine the effect of macroeconomic conditions on aggregate business failures based on firm-level phenomena, implying an incomplete one-way causality. Arguing that business failures at the aggregate level should be modeled beyond our thinking about firm-level failure, i.e., the possible causality from business failures to macro conditions should be allowed, we have instead studied this issue in a cointegrated VAR built on DAG, a tool for data-driven causality identification. Based on such a data-driven framework, the interrelationship among aggregate business failures, aggregate corporate profits, interest rate, inflation, and stock market performance are examined for the case of the U.S. using quarterly data between 1980 and 2004, a period covered by the Bankruptcy Reform Act of 1978. A central finding of our analysis is the exogeneity of aggregate business failures, i.e., aggregate business failures are not influenced much by other variables,except that a positive shock to interest rate causes a lasting rise in business failures. Furthermore, a rise in business failures causes significant drops in corporate profits, stock market performance, and to a lesser degree, interest rate. This finding, especially the causal flows from business failures to macro variables, lends support to the mechanism proposed by Bernanke (1981), who showed that business failure risk can play a structural role in economic fluctuations. Based on that mechanism, rising bankruptcy risk makes all agents in the economy cautious. As a result, consumers and firms cut or defer their purchasing, whereas lenders become more selective and limit the size of their loans, which, in turn, deepens a recession. In a broader view, the results in this study relate to the wider scope of literature regarding the effect of corporate financial conditions on macroeconomic conditions (e.g., Fazzari, Hubbard, and Petersen 1988, Carpenter, Fazzari, and Petersen 1994, Gilchrist and Himmelberg 1995, among others). Particularly, as summarized in Bernanke, Gertler, and Gilchrist (1998), from a perspective that gives a central role to credit market conditions in economic fluctuations, “deteriorating credit-market conditions – sharp increases in insolvencies and bankruptcies, rising real debt burdens, collapsing asset prices, and bank failures – are not simply passive reflections of a declining real economy, but are in themselves a major factor depressing economic activity.” To our knowledge, few previous studies contain direct evidence for the causal effect from business failures to economic fluctuations. The result documented in this work, along with that in Liu (2009), may be viewed as supplying such evidence confirming the proactive role of bankruptcies. In this perspective, the policy implication of our findings goes beyond business failures. It actually takes us back to the general story regarding the role of monetary policy as a credit policy in stabilizing the economy. Such a general context should be the policy background against which policy makers think about the best responses to business failure risk in the use of monetary instruments.