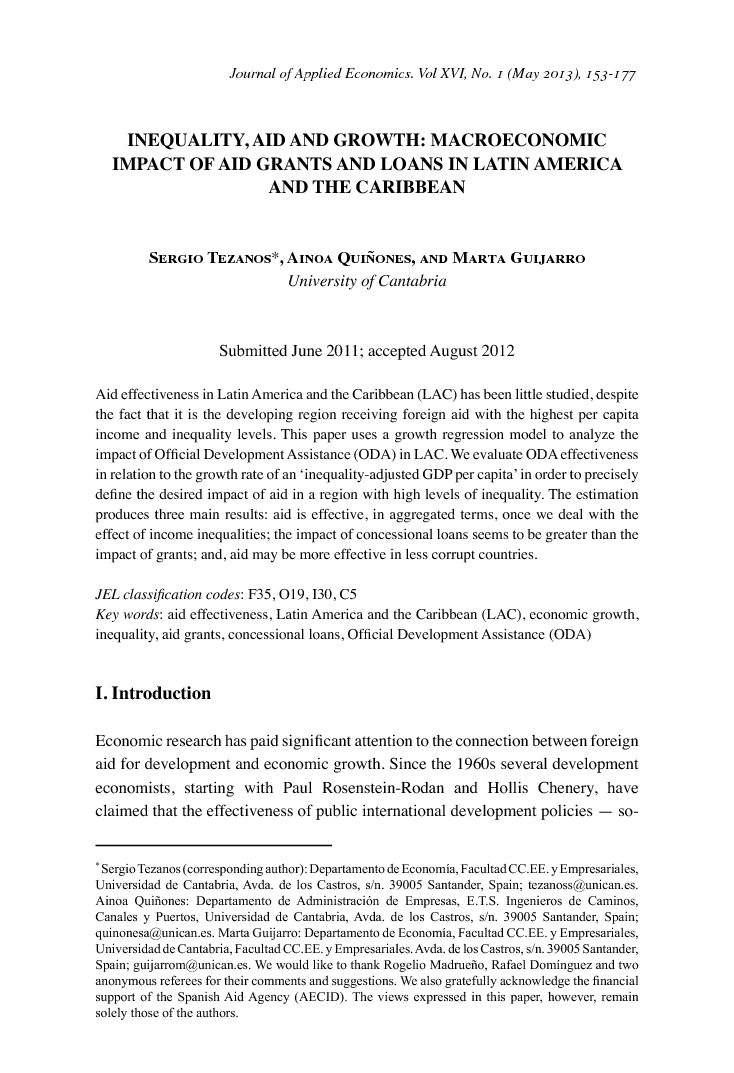 Aid effectiveness in Latin America and the Caribbean (LAC) has been little studied, despite the fact that it is the developing region receiving foreign aid with the highest per capita income and inequality levels. This paper uses a growth regression model to analyze the impact of Official Development Assistance (ODA) in LAC. We evaluate ODA effectiveness in relation to the growth rate of an ‘inequality-adjusted GDP per capita’ in order to precisely define the desired impact of aid in a region with high levels of inequality. The estimation produces three main results: aid is effective, in aggregated terms, once we deal with the effect of income inequalities; the impact of concessional loans seems to be greater than the impact of grants; and, aid may be more effective in less corrupt countries.

Economic research has paid significant attention to the connection between foreign aid for development and economic growth. Since the 1960s several development economists, starting with Paul Rosenstein-Rodan and Hollis Chenery, have claimed that the effectiveness of public international development policies — socalled Official Development Assistance, ODA — should be evaluated in terms of the stimulus finally exerted on the developing countries’ growth rate of per capita income. Nevertheless, after more than 50 years of research it is still debatable to conclude that ODA stimulates growth in aggregate terms. In contrast with previous studies, this paper deals with three issues that have been insufficiently considered in the aid effectiveness literature: Firstly, the majority of aid-effectiveness studies have analyzed the whole group of developing countries, paying limited attention to the analysis of regional experiences. Specifically, aid impact in Latin America and the Caribbean (LAC) — the developing region with the highest per capita income, but also with the highest inequality levels among those which receive aid — has been little studied, and it has only been pointed out that this region is an outlier in the general models of aid effectiveness.1 Secondly, preceding studies have analyzed the impact of aid on recipient countries’ GDP per capita growth rate. However, this method involves a ‘target problem’, which has not been previously considered in the literature: it is not possible to distinguish if aid benefits the income growth of the relatively richer or poorer citizens, precisely when the latter citizens are, indeed, the target population of aid policies.2 In this context, the intra-national distribution of foreign aid should help to reduce income inequalities. This is the reason why we evaluate aideffectiveness in terms of the growth rate of the GDP per capita for the population with lower incomes, which we call the ‘inequality-adjusted GDP per capita’. Thirdly, previous studies have analyzed the aggregate ODA impact, thus neglecting the fact that different aid modalities may have dissimilar impacts on growth. In contrast, we disaggregate into ODA grants and ODA loans, and analyze the financial characteristics and productive incentives that may affect their potential impact on growth. All in all, this article aims to analyze the impacts of ODA grants and loans on the inequality-adjusted rate of growth of LAC countries’ income per capita duringthe period 1992–2007. The second section briefly reviews the recent economic literature on aid effectiveness. The third section proposes an analytical model of aid impact on growth, adapted to the peculiarities of the American region, and based on growth theory. The fourth section presents the results obtained from the estimation of the ODA’s impact model. The last section summarizes the main conclusions of this piece of research and suggests some economic policies that may increase the effectiveness of aid disbursed to LAC.

LAC countries are among the developing economies with highest levels of income per capita, but also the economies with highest levels of inequality. The region has taken part in the international co-operation system since its origins, receiving since 1960 a total ODA flow that amounts to 0.48% of the regional GDP. Obviously, from these limited resources it is not reasonable to expect an outstanding impact, but invested strategically they should effectively support the development strategies of these countries. The aim of this paper is to quantify the impact that ODA has exerted on the LAC countries’ pace of growth during the period 1992-2007. For this reason, we run a regression model of the aid impact on growth, adapted to the peculiarities of the region and based on modern growth theory. The model evaluates aid effectiveness in relation to the growth rate of the GDP per capita within the population with income lower than that of the ninth decile (‘inequality-adjusted GDP per capita’), in order to precisely define the desired impact of aid in a regionwhich is characterized by high inequality levels. In contrast with other previous studies, we limit our analysis to the sample of Latin American countries in order to capture the peculiarities of their growth dynamics, and we distinguish between two aid modalities — ODA grants and ODA loans — that may have different impacts on growth. The econometric estimation of the model points out three relevant results in relation to aggregate aid effectiveness for the period 1992-2007. Firstly, ODA has been effective in stimulating the rate of growth of the inequality-adjusted GDP per capita. Furthermore, aid impact dilutes when we consider the GDP per capita for all income deciles. This result suggests that aid has been effectively concentrated in those Latin American citizens with lower incomes (within each country), which may reflect a progressive ‘within country’ distribution of aid. Secondly, the analysis suggests that ODA loans have exerted a greater stimulus on growth than ODA grants (with average estimated coefficients of 0.27 and 0.44, respectively). This result supports the use of both aid grants and loans in a middle income region such as LAC, despite its long record of debt unsustainability problems. Obviously, from this result we cannot infer that concessional loans are preferable than grants; on the contrary, grants should still be concentrated in those LAC countries with lesser repayment capacities and more restricted access to credit. But the use of concessional loans should be enhanced in those economies which offer guaranties of repayment and need resources for financing productive activities. Yet this piece of research leaves unresolved the questions about which socio-economic conditions are more appropriate for the use of loans or grants, and which kind of development activities — with potentially different growth impacts — are primarily financed by loans or grants. Thirdly, aid seems to be more effective in countries with better mechanisms of corruption control. This result backs up the thesis of previous studies that claimed the importance of institutions for the effectiveness of aid (such as Burnside and Dollar 2004; Chauvet and Guillaumont 2004; and Tezanos et al. 2009). All in all, this paper tries to contribute to the aid-effectiveness literature; a literature that, after 50 years of research, still offers controversial conclusions about the potential mechanisms of aid impact on growth. Actually, our study onlytests the ‘macroeconomic effectiveness’ of aid in relation to economic growth, and not in relation to progress in other dimensions of human development. Therefore, it should be interpreted as a partial evaluation of aid effectiveness, exclusively referred to the economic dimension of development.