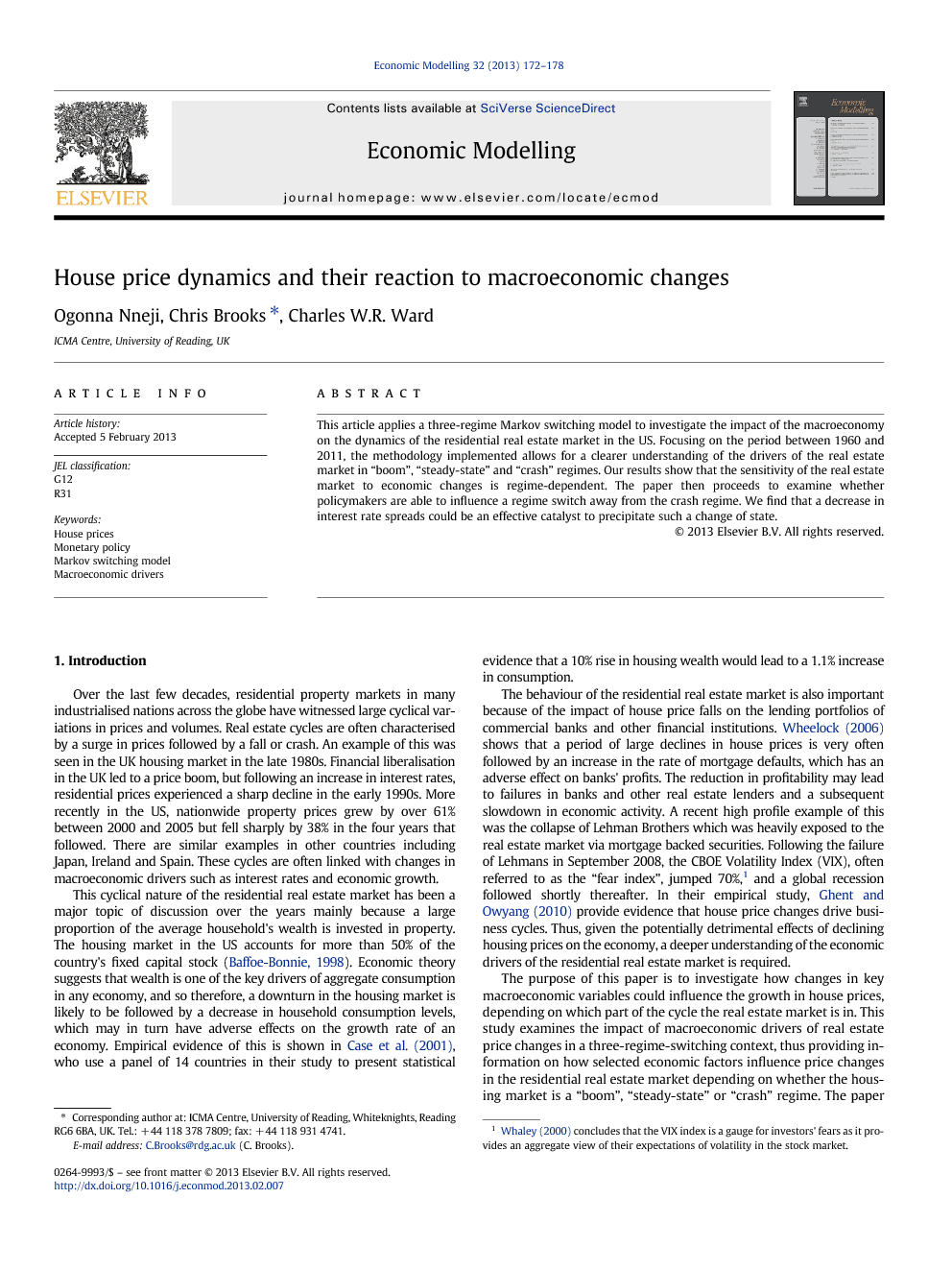 This article applies a three-regime Markov switching model to investigate the impact of the macroeconomy on the dynamics of the residential real estate market in the US. Focusing on the period between 1960 and 2011, the methodology implemented allows for a clearer understanding of the drivers of the real estate market in “boom”, “steady-state” and “crash” regimes. Our results show that the sensitivity of the real estate market to economic changes is regime-dependent. The paper then proceeds to examine whether policymakers are able to influence a regime switch away from the crash regime. We find that a decrease in interest rate spreads could be an effective catalyst to precipitate such a change of state.

In this paper, we employ a three-state Markov switching nonlinear econometric model to examine the relationship between the residential real estate market and key macroeconomic variables in the US. We investigate the regime-dependent effects of changes to short term interest rates, term spread, inflation and GDP on house prices — i.e., we study the effect of these macroeconomic variables on house price dynamics in times of housing booms, busts and tranquillity. The paper then proceeds to evaluate the effect of policy changes on switching regimes in the housing market. We find the following. First, there is statistical evidence to suggest there to be three distinct regimes in the housing market, namely “steady-state”, “boom” and “crash” regimes. Changes to the selected macroeconomic variables significantly affect the dynamics of house prices in the steady-state and boom regimes only. During housing busts, however, the real estate market disconnects from these macroeconomic fundamentals. We also find evidence of varying degrees of sensitivity of house prices to changes in these economic variables, with prices generally being more sensitive during housing booms. We also show that using a standard, single-state methodology inappropriately indicates that house prices are responsive to changes in the short term interest rate and GDP only, thus providing an incomplete view of the market. Our second set of key findings in this study is based on the estimated probabilities of switching from one regime to another. We find that there is a 5% chance of moving from a housing boom in one quarter to a housing bust in the next quarter, but the most persistent regime is the steady-state as there is a 98% chance of remaining within it if the housing market was previously in the steady-state. Third, we show that monetary policy could potentially be used as a tool to enforce a switch away from housing busts. Using a probit model based on the estimated filtered probabilities from the Markov switching model, we find that there is a statistically significant and positive relationship between increases in the term spread and the probability of being in the housing crash regime, thus implying that a reduction in the spread between long and short term interest rates reduces the probability of being in the crash regime. Interest rates and money supply cannot, however, be used to instigate a switch away from a housing bust. Although this study provides a detailed examination of the impact of macroeconomic fluctuations on the housing market, we do not evaluate the effect of other non-monetary policy changes on the market due to data constraints, and thus further research could be conducted in this area. If researchers were able to access unique fiscal data, they could extend this study to investigate whether it is possible to use fiscal policies to enforce a transition away from housing busts. This would allow policymakers to judiciously select the most appropriate tools to use in reinvigorating a collapsing real estate market or possibly dampening demand during times of overheating.