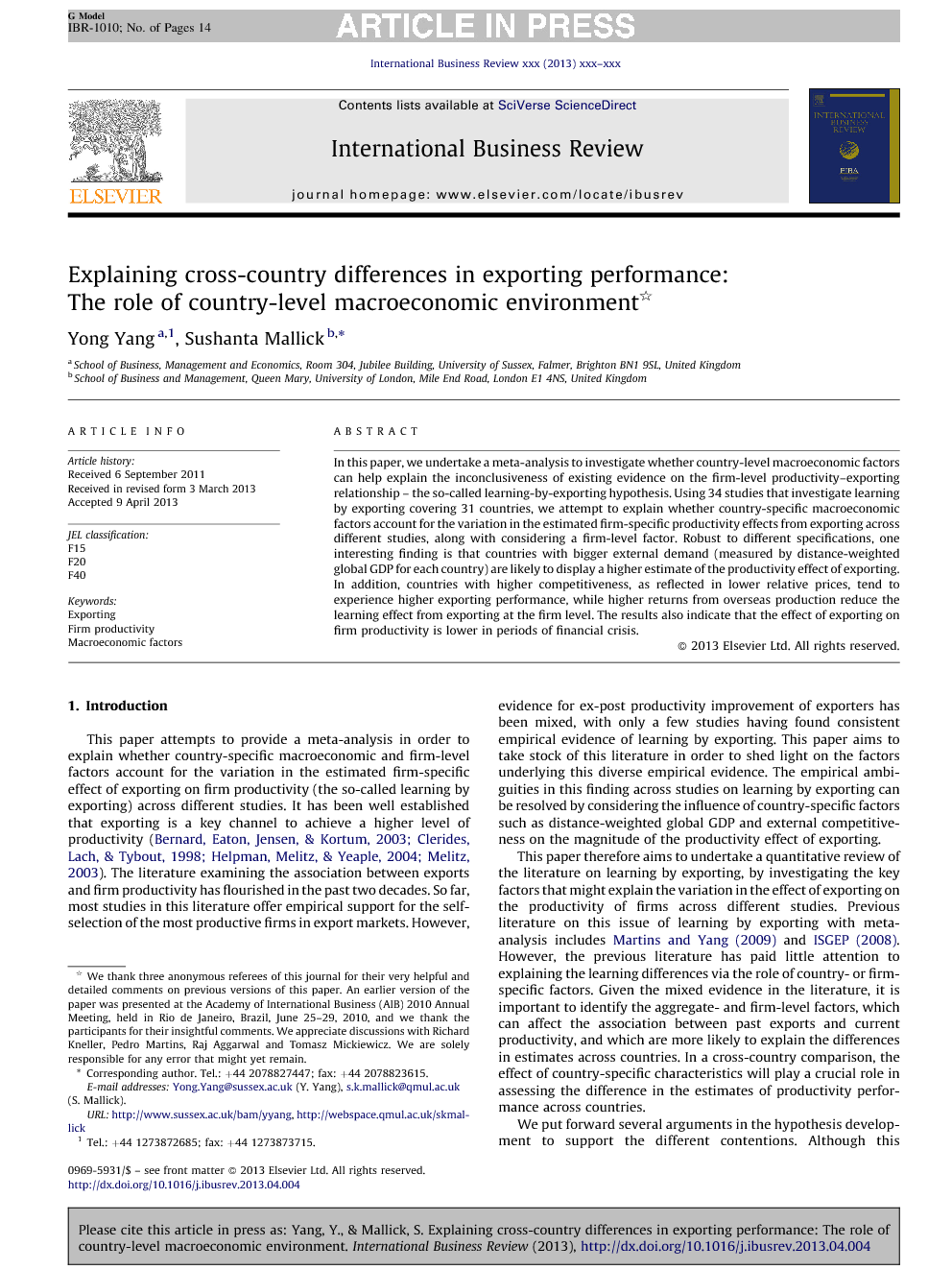 In this paper, we undertake a meta-analysis to investigate whether country-level macroeconomic factors can help explain the inconclusiveness of existing evidence on the firm-level productivity–exporting relationship – the so-called learning-by-exporting hypothesis. Using 34 studies that investigate learning by exporting covering 31 countries, we attempt to explain whether country-specific macroeconomic factors account for the variation in the estimated firm-specific productivity effects from exporting across different studies, along with considering a firm-level factor. Robust to different specifications, one interesting finding is that countries with bigger external demand (measured by distance-weighted global GDP for each country) are likely to display a higher estimate of the productivity effect of exporting. In addition, countries with higher competitiveness, as reflected in lower relative prices, tend to experience higher exporting performance, while higher returns from overseas production reduce the learning effect from exporting at the firm level. The results also indicate that the effect of exporting on firm productivity is lower in periods of financial crisis.

The study of exporting and firm performance has increasingly gained importance in the economic and business implications of globalization. This paper has reviewed the recent empirical literature on heterogeneous firms and trade; it emphasizes that most productive firms self-select into international markets. However, the empirical literature on the post-entry performance has been mixed, motivating us to undertake this quantitative review to understand the factors explaining variation in firm productivity across countries/studies. Surveying all the related studies that address the causal relationship between exporting and firm productivity, the recent surveys by Wagner (2007) and Martins and Yang (2009) indicate that the evidence for this ‘learning effect’ is “mixed and unclear”. Under the meta analysis approach, we have attempted to understand if there are any systematic relationships between country-level factors and the learning effect, along with controlling for the characteristics of each study. This difference in post-entry productivity or learning by exporting could occur due to differences in country- and firm-specific factors. We considered five different sets of factors, including variables such as external demand, relative price, trade openness, inward FDI flows, GDP growth, inflation, financial reforms, financial crisis and returns from outward FDI. We conducted the analysis on 34 studies and 281 estimates from estimating the role of exporting on firm productivity. Overall, the average level of learning effect across all studies is around 9%. However, this baseline result changes after the country-specific and firm-level factors are considered. Out of our hypotheses described in the second section, there is strong evidence in support of hypotheses 1a, 2, 4b, and 5, whereas there is weak evidence for hypothesis 4a, and little evidence for hypotheses 1b, 3a and 3b. While external demand and external price competitiveness (real currency depreciation) increase the learning effect from exporting, the returns from outward FDI tend to reduce the learning effect. The effect of exporting on firm productivity is lower in periods of financial crisis. All other factors appear to be less important in explaining the variation in learning effect across countries. Our results support the ‘learning by exporting’ heterogeneous firm models, in that they tend to suggest that greater impact from exports will arise precisely when countries have a higher level of external demand and export competitiveness. So the level of development per se does not appear to be the only explanation for the observed cross-country differences as noted in Martins and Yang (2009); rather, it is the external demand and price competitiveness facing firms in a particular country that have a significantly greater performance effect from exporting. Whether firms will engage in exporting or not is obviously a managerial decision, and managers often wish to know whether the macroeconomic factors or policy changes (such as trade liberalization) help explain the effect of exporting on firm-level productivity. As a matter of fact, the mixed evidence and ambiguities on learning by exporting across studies could be explained by country-specific factors such as distance-weighted global GDP and external competitiveness on the magnitude of the productivity effect of exporting. This research may well provide a rationale for export-oriented policies to improve export performance. REER as a relative price variable typically reflects the degree of export competitiveness of a country in the foreign market, and influences firms’ pricing strategy when they serve foreign markets through exporting. Exporters experience a lower learning effect during the period of real exchange rate appreciations. Equally, the well-developed financial markets potentially influence better export performance. Besides, as this paper finds that higher returns from outward FDI is associated with a lower learning effect from exporting, this dimension does provide a managerial insight in terms of internationalisation strategies by firms. Firms serve foreign markets through either FDI or exports, or both, and learning effects are often substituted by the returns from FDI, as overseas expansions through FDI allow for lower marginal cost than through exporting (Rob & Vettas, 2003). Given the current global financial crisis, the results in this paper suggest that the productivity impact of exporting will be lower in periods of crisis. This is partly because exporters will find it hard to access the necessary working capital and long-term investment financing as well as trade financing at a time of crisis. Thus the lacklustre credit market conditions will have a dampening impact on international trade, slowing down exporting activity and thereby lowering productivity. One limitation of our meta-analysis could be that it is based on unbalanced panel data. Some country data are cross-sectional in nature, which will not allow for any unobserved fixed effect at the country level. Neither does this allow us to address the impact of changes in macro-environments within the country on the changes in learning-by-exporting effects. Moreover, our paper has data from a limited number of countries (31), collected from learning-by-exporting literature and thus our findings do not rule out potential country selection bias. We leave these topics for future research, as the growing body of empirical literature on learning by exporting continues to evolve in different macroeconomic environments driven by continued trade and financial reforms.