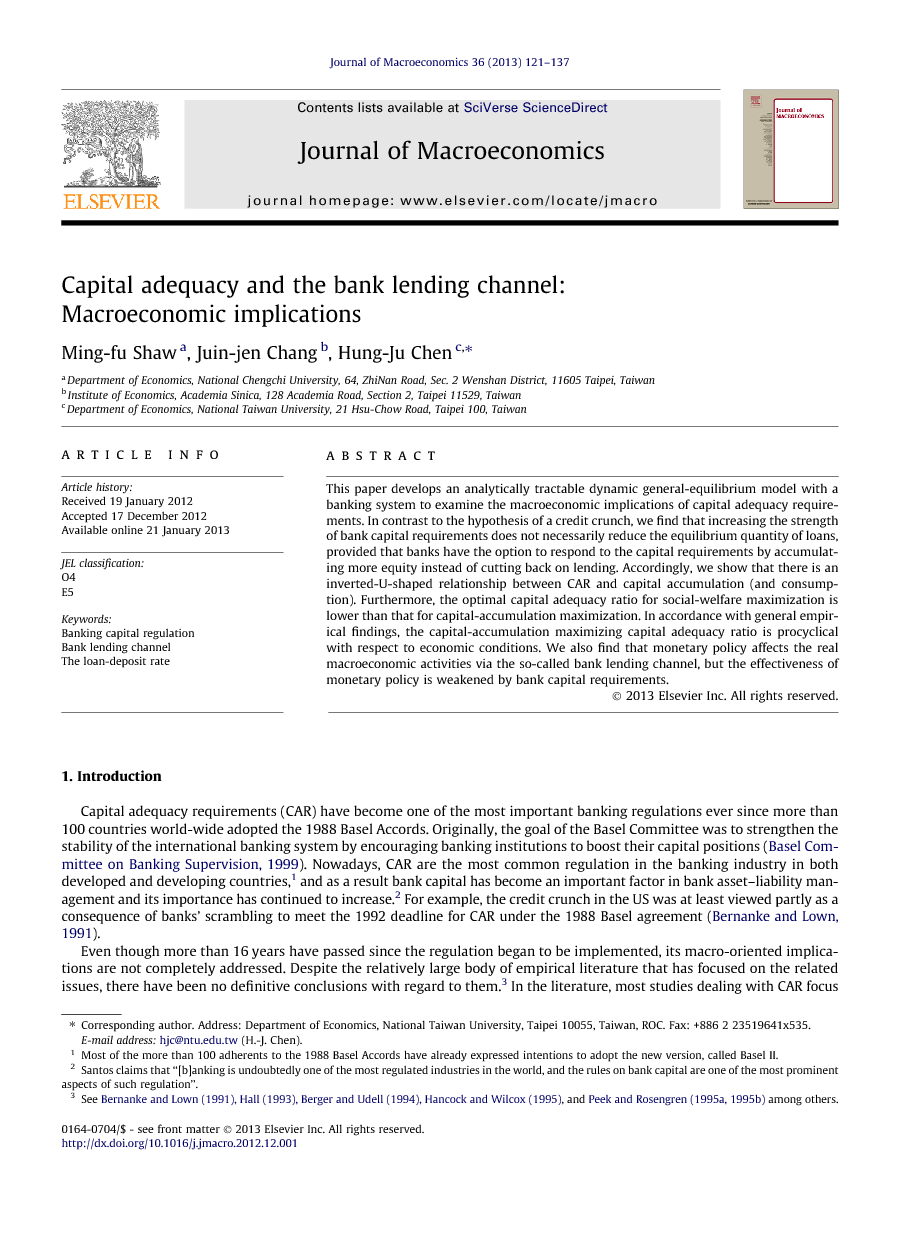 This paper develops an analytically tractable dynamic general-equilibrium model with a banking system to examine the macroeconomic implications of capital adequacy requirements. In contrast to the hypothesis of a credit crunch, we find that increasing the strength of bank capital requirements does not necessarily reduce the equilibrium quantity of loans, provided that banks have the option to respond to the capital requirements by accumulating more equity instead of cutting back on lending. Accordingly, we show that there is an inverted-U-shaped relationship between CAR and capital accumulation (and consumption). Furthermore, the optimal capital adequacy ratio for social-welfare maximization is lower than that for capital-accumulation maximization. In accordance with general empirical findings, the capital-accumulation maximizing capital adequacy ratio is procyclical with respect to economic conditions. We also find that monetary policy affects the real macroeconomic activities via the so-called bank lending channel, but the effectiveness of monetary policy is weakened by bank capital requirements.

Although CAR have become the most common regulation in the banking industry, several basic and important macroeconomic questions remain unanswered. On the one hand, the large body of empirical literature on related subjects does not reach definitive conclusions regarding them. On the other hand, there are still very few theoretical models offering explanations from a general equilibrium perspective. To fill this gap, this paper has built an analytically tractable macro model and has used it to address the macroeconomic implications of a capital adequacy requirement system which links bank lending to bank equity. Essentially, both positive and normative analyses have been conducted in the paper. We have found that increasing the strength of the CAR does not necessarily reduce the equilibrium quantity of loans, provided that banks can change their equity-debt financing mix by accumulating more equity as opposed to cutting back on lending. This does not support the hypothesis of a credit crunch. Moreover, once the CAR increase the quantity of loans, our macro-model suggests that more severe CAR may also give rise to a favorable effect, rather than an adverse one, on capital accumulation and consumption. Of particular importance, there is an inverted-U-shaped relationship between the CAR and capital accumulation (and consumption). For the case, where there is a relatively low status quo ratio for the CAR, appropriately increasing the strength of the CAR favors capital accumulation and consumption. Of particular note, as a benchmark, for banks the possibility of holding the equality issued by firms is abstracted for simplicity. However, in an extension we have shown that the above-mentioned results are robust when the banks are allowed to hold equities issued by firms. We also find that the optimal capital adequacy ratio of social welfare maximization is lower than that of capital accumulation maximization. The capital-maximizing CAR rate is lower when the bad loan rate and the banks’ operational costs of managing equities increase. The welfare-maximizing CAR rate also has a negative relationship with the banks’ operational costs of managing equities, but it has an inconclusive relationship with the bad loan rate. Finally, there exists the so-called bank lending channel – a contractionary monetary policy decreases the equilibrium quantity of loans and, as a result, capital accumulation and consumption fall in response. However, since banks can change their equity-debt financing mix by accumulating equity rather than by cutting back on loans, stricter CAR lower the effectiveness of monetary policy. There are several directions over which further theoretical research would be interesting. First, in this model we do not deal with the risk attitude of banks toward the uncertainty involving bad loans. Keeley and Furlong (1990) use the mean–variance approach to analyze the effects of bank capital regulation on the assets and bankruptcy risk of the insured. It is interesting to explore how the introduction of uncertainty into the model naturally leads to an examination of the effects of the bank’s risk aversion on the macro consequences of the CAR. Secondly, currency in circulation is abstracted from our model. Although this simplification does not alter our results, an important direction for future research may be to further examine the monetary policy under various monetary regimes, such as inflation targeting and Taylor’s rule, when the model incorporates currency in circulation. Finally and more interestingly, in future research we will perform a numerical exercise to compute the welfare costs of moderate rates of CAR and the weakening effects of CAR on monetary policy.