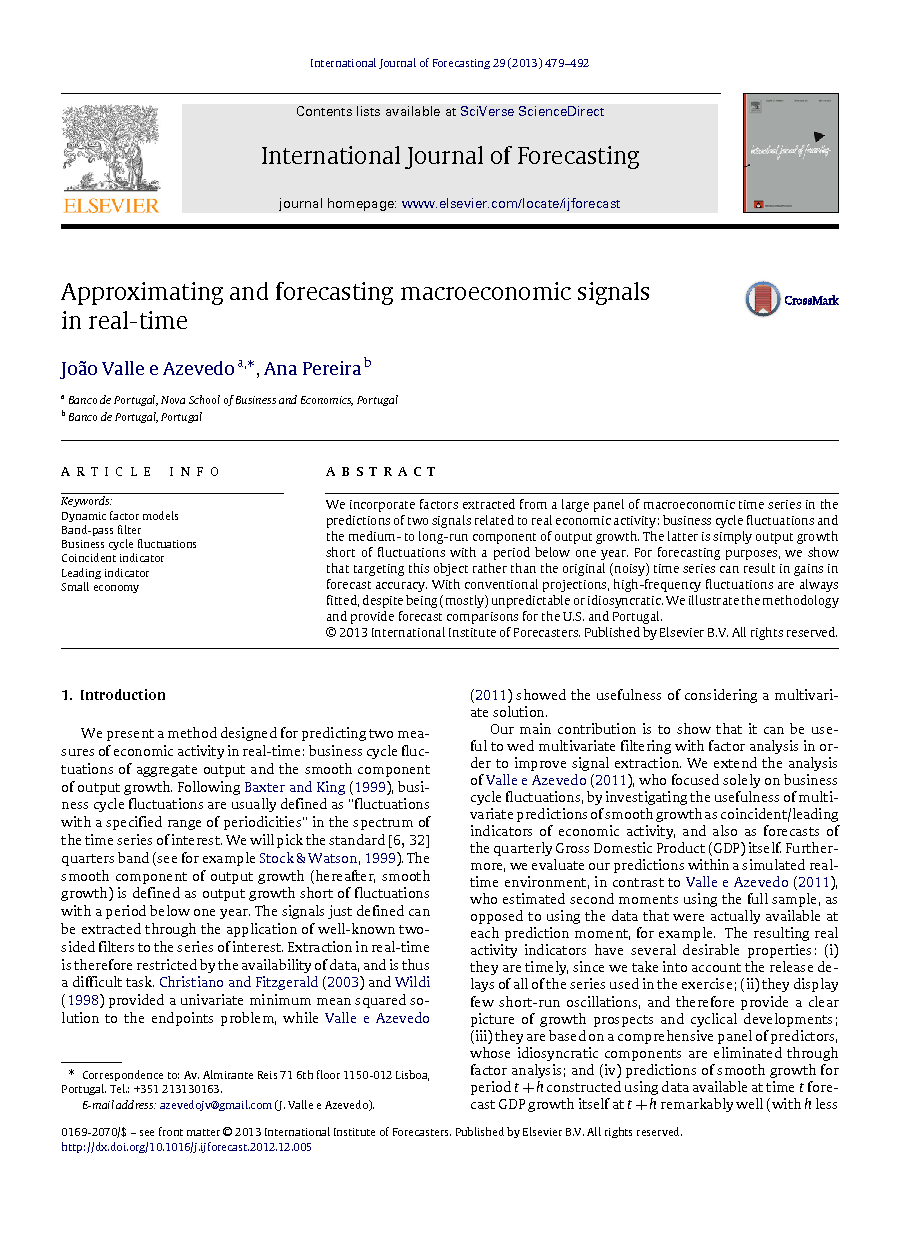 We incorporate factors extracted from a large panel of macroeconomic time series in the predictions of two signals related to real economic activity: business cycle fluctuations and the medium- to long-run component of output growth. The latter is simply output growth short of fluctuations with a period below one year. For forecasting purposes, we show that targeting this object rather than the original (noisy) time series can result in gains in forecast accuracy. With conventional projections, high-frequency fluctuations are always fitted, despite being (mostly) unpredictable or idiosyncratic. We illustrate the methodology and provide forecast comparisons for the U.S. and Portugal.

We present a method designed for predicting two measures of economic activity in real-time: business cycle fluctuations of aggregate output and the smooth component of output growth. Following Baxter and King (1999), business cycle fluctuations are usually defined as “fluctuations with a specified range of periodicities” in the spectrum of the time series of interest. We will pick the standard [6,32] quarters band (see for example Stock & Watson, 1999). The smooth component of output growth (hereafter, smooth growth) is defined as output growth short of fluctuations with a period below one year. The signals just defined can be extracted through the application of well-known two-sided filters to the series of interest. Extraction in real-time is therefore restricted by the availability of data, and is thus a difficult task. Christiano and Fitzgerald (2003) and Wildi (1998) provided a univariate minimum mean squared solution to the endpoints problem, while Valle e Azevedo (2011) showed the usefulness of considering a multivariate solution. Our main contribution is to show that it can be useful to wed multivariate filtering with factor analysis in order to improve signal extraction. We extend the analysis of Valle e Azevedo (2011), who focused solely on business cycle fluctuations, by investigating the usefulness of multivariate predictions of smooth growth as coincident/leading indicators of economic activity, and also as forecasts of the quarterly Gross Domestic Product (GDP) itself. Furthermore, we evaluate our predictions within a simulated real-time environment, in contrast to Valle e Azevedo (2011), who estimated second moments using the full sample, as opposed to using the data that were actually available at each prediction moment, for example. The resulting real activity indicators have several desirable properties: (i) they are timely, since we take into account the release delays of all of the series used in the exercise; (ii) they display few short-run oscillations, and therefore provide a clear picture of growth prospects and cyclical developments; (iii) they are based on a comprehensive panel of predictors, whose idiosyncratic components are eliminated through factor analysis; and (iv) predictions of smooth growth for period t+ht+h constructed using data available at time tt forecast GDP growth itself at t+ht+h remarkably well (with hh less than one year). We conclude that, for forecasting purposes, targeting a smooth version of a time series may be more efficient than targeting the original series. With conventional projections, short-run fluctuations are always fitted, despite being (mostly) unpredictable or idiosyncratic. At least in the context of forecasting output growth, it seems clear that a superior forecast method is not characterized by its ability to nail the high frequency fluctuations, especially at long horizons. Our approach can be summarized as follows: we assume that the panel of predictors is described appropriately by a factor model, as was originally proposed by Geweke (1977) and Sargent and Sims (1977). We estimate the common factors using principal components, as did Stock and Watson, 2002a and Stock and Watson, 2002b.1 Next, we use the estimated factors and the series of interest in a feasible (minimum mean squared error) projection targeting business cycle fluctuations or smooth growth. The resulting multivariate filter is an extension of the univariate filter developed by Christiano and Fitzgerald (2003) and Wildi (1998), which is itself an extension of the two-sided symmetric filter of Baxter and King (1999).2 Following Stock and Watson (1989), model-based (or parametric) methods assuming a factor structure have also been used to construct business cycle (or growth) indicators. Harvey and Trimbur (2003) propose unobserved components models for which the extraction of a cycle component is equivalent to applying a band-pass filter. Additionally incorporating an extension proposed by Rünstler (2004) that allows for phase shifts in the cyclical components of multiple time series, Valle e Azevedo, Koopman, and Rua (2006) construct a business cycle indicator which can be seen as a multivariate band-pass filter. In their paper, although a common factor structure is assumed to describe a small set of time series, the representation is far from general and the method does not aim to predict a pre-defined range of frequencies. That is therefore the aim of this paper. The approach closest to ours is that of Altissimo, Cristadoro, Forni, Lippi, and Veronese (2010), which resulted in the New Eurocoin indicator. The indicator is obtained by projecting the smooth component of output growth onto estimated smooth factors. We will contrast the two approaches in more detail later. The outline of the paper is as follows. In Section 2 we define our targets precisely and describe how we predict them. In Section 3 we discuss the estimation of the factors which are used as covariates in the prediction of the signals. In Section 4 we assess the real-time performances of our predictions, analyzing results for the U.S., while in Section 5 we analyze the performances of predictions of smooth growth as forecasts of GDP growth for the U.S. and Portugal. Section 6 concludes.

We have shown how to usefully integrate recent developments in the analysis of dynamic factor models into the approximation of band-pass filters (or predictions of distributed lags of a series of interest). The resulting multivariate band-pass filter, fuelled by factors extracted from a large panel of time series, is reliable and outperforms the univariate predictions in various dimensions. We have focused on real-time predictions of two relevant macroeconomic signals related to real activity: business cycle fluctuations and the smooth growth of real GDP. In our analysis of the forecasting performance of smooth growth, we have highlighted an important insight: targeting a smooth version of a time series may be more useful than targeting the sometimes erratic (or unpredictable at high frequencies) original series, especially at long horizons. Conventional forecast models fit the variables of interest at every frequency, regardless of the predictive content of the available covariates at each frequency.