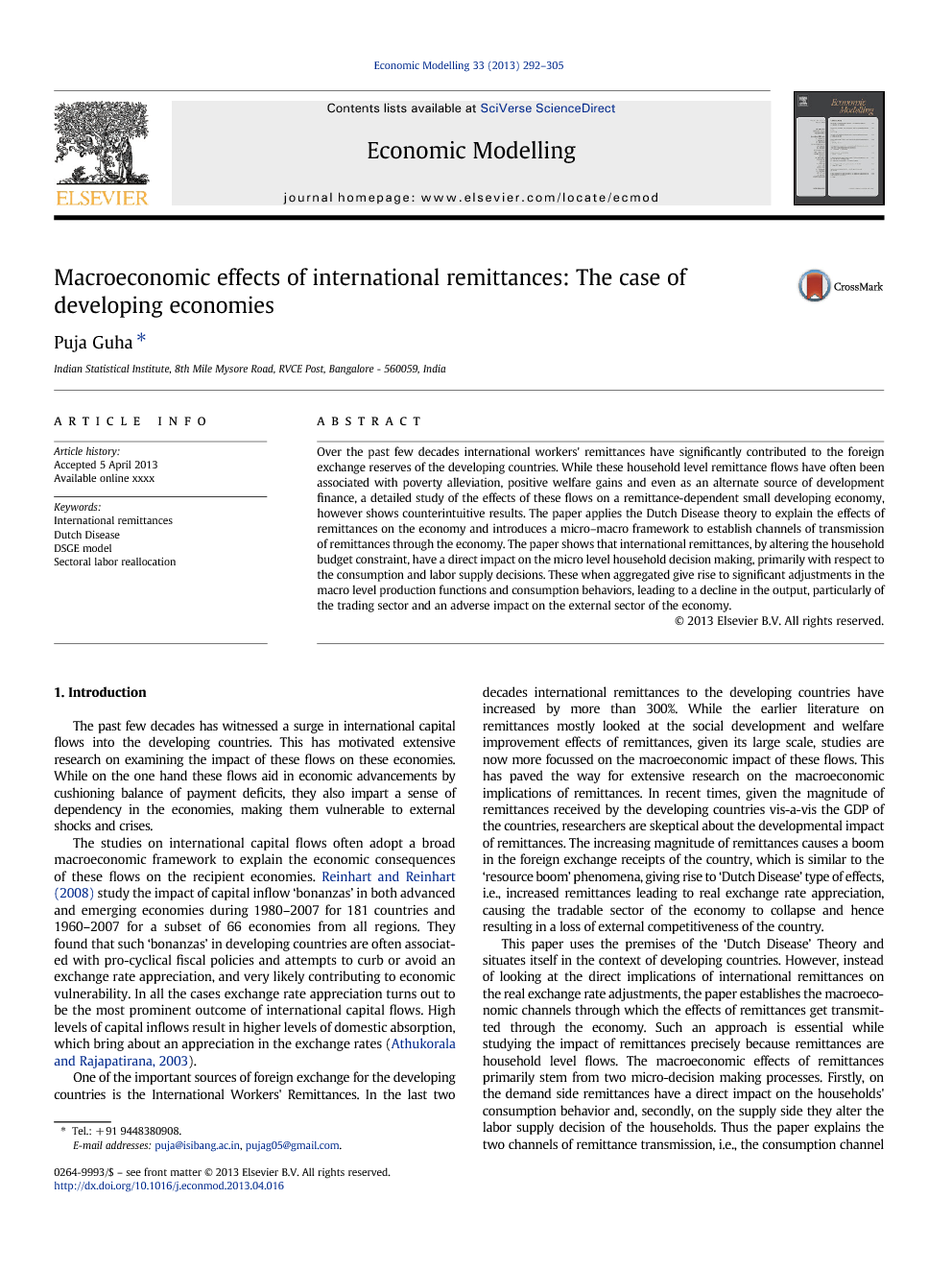 Over the past few decades international workers' remittances have significantly contributed to the foreign exchange reserves of the developing countries. While these household level remittance flows have often been associated with poverty alleviation, positive welfare gains and even as an alternate source of development finance, a detailed study of the effects of these flows on a remittance-dependent small developing economy, however shows counterintuitive results. The paper applies the Dutch Disease theory to explain the effects of remittances on the economy and introduces a micro–macro framework to establish channels of transmission of remittances through the economy. The paper shows that international remittances, by altering the household budget constraint, have a direct impact on the micro level household decision making, primarily with respect to the consumption and labor supply decisions. These when aggregated give rise to significant adjustments in the macro level production functions and consumption behaviors, leading to a decline in the output, particularly of the trading sector and an adverse impact on the external sector of the economy.

The past few decades has witnessed a surge in international capital flows into the developing countries. This has motivated extensive research on examining the impact of these flows on these economies. While on the one hand these flows aid in economic advancements by cushioning balance of payment deficits, they also impart a sense of dependency in the economies, making them vulnerable to external shocks and crises. The studies on international capital flows often adopt a broad macroeconomic framework to explain the economic consequences of these flows on the recipient economies. Reinhart and Reinhart (2008) study the impact of capital inflow ‘bonanzas’ in both advanced and emerging economies during 1980–2007 for 181 countries and 1960–2007 for a subset of 66 economies from all regions. They found that such ‘bonanzas’ in developing countries are often associated with pro-cyclical fiscal policies and attempts to curb or avoid an exchange rate appreciation, and very likely contributing to economic vulnerability. In all the cases exchange rate appreciation turns out to be the most prominent outcome of international capital flows. High levels of capital inflows result in higher levels of domestic absorption, which bring about an appreciation in the exchange rates (Athukorala and Rajapatirana, 2003). One of the important sources of foreign exchange for the developing countries is the International Workers' Remittances. In the last two decades international remittances to the developing countries have increased by more than 300%. While the earlier literature on remittances mostly looked at the social development and welfare improvement effects of remittances, given its large scale, studies are now more focussed on the macroeconomic impact of these flows. This has paved the way for extensive research on the macroeconomic implications of remittances. In recent times, given the magnitude of remittances received by the developing countries vis-a-vis the GDP of the countries, researchers are skeptical about the developmental impact of remittances. The increasing magnitude of remittances causes a boom in the foreign exchange receipts of the country, which is similar to the ‘resource boom’ phenomena, giving rise to ‘Dutch Disease’ type of effects, i.e., increased remittances leading to real exchange rate appreciation, causing the tradable sector of the economy to collapse and hence resulting in a loss of external competitiveness of the country. This paper uses the premises of the ‘Dutch Disease’ Theory and situates itself in the context of developing countries. However, instead of looking at the direct implications of international remittances on the real exchange rate adjustments, the paper establishes the macroeconomic channels through which the effects of remittances get transmitted through the economy. Such an approach is essential while studying the impact of remittances precisely because remittances are household level flows. The macroeconomic effects of remittances primarily stem from two micro-decision making processes. Firstly, on the demand side remittances have a direct impact on the households' consumption behavior and, secondly, on the supply side they alter the labor supply decision of the households. Thus the paper explains the two channels of remittance transmission, i.e., the consumption channel and the labor channel, and eventually their impact on the economic growth. The analysis is divided in two parts. In the first part develops a general equilibrium model in the static framework to explain the transmission process and derives comparative statics for the decision variables with respect to a change in remittance inflows. In the second part the paper converts the static model into a dynamic model by constructing a dynamic stochastic general equilibrium (DGSE) model of the transmission mechanism and solves it for a small open remittance-dependent economy. The simulation results indicate that remittances give rise to Dutch Disease type of effect through two channels – the consumption channel and the inter-sectoral labor adjustment channel. In an economy with two-sectors, traded and non-traded, an increase in remittances leads to an increase in the consumption levels in both the sectors, this leads to an increase in the relative price of the non-traded sector, thus causing the labor to reallocate from the traded sector into the non-traded sector. This eventually leads to a fall in the output of the traded sector, causing the traded sector to contract and thus the country losing its external competitiveness. The paper is organized in seven sections. Section 2 explains the concept of resource boom and Dutch Disease in the context of international remittance flows. Section 3 provides the theoretical background of the model and explains the channels of transmissions in a static framework. Section 4 formulates the model in the dynamic framework and constructs a DSGE model, which is then simulated for the Bangladesh economy. The choice of Bangladesh as a reference country is motivated by two factors. Firstly, being one of the top ten remittance receiving countries, it fits into our framework of a small open economy, with remittances as an important source of foreign exchange transfers. Secondly, apart from being a small economy, Bangladesh economy is also quite homogenous in terms of the industries. This makes it possible to distinctly divide the economy into traded and non-traded sectors, and increases the generalizability of the model across all developing countries with similar dependence on remittances. Section 5 highlights the role of international remittances in Bangladesh economy. Section 6 then estimates the model using Bayesian calibration method and generates the impulse response functions of the macro parameters to a shock in the remittances. Section 7 summarizes the paper and highlights the policy conclusions for managing and absorbing international remittance flows.