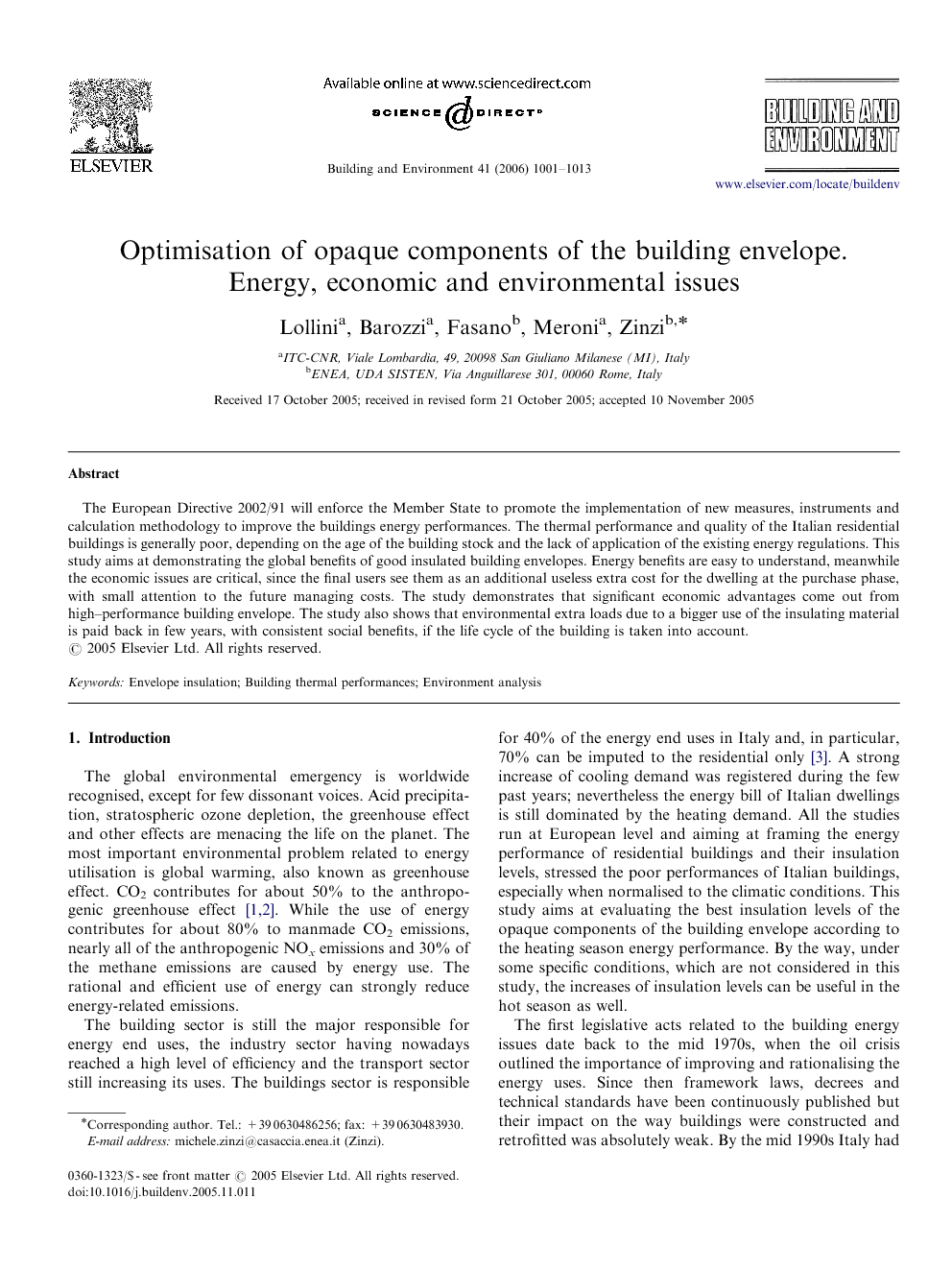 The European Directive 2002/91 will enforce the Member State to promote the implementation of new measures, instruments and calculation methodology to improve the buildings energy performances. The thermal performance and quality of the Italian residential buildings is generally poor, depending on the age of the building stock and the lack of application of the existing energy regulations. This study aims at demonstrating the global benefits of good insulated building envelopes. Energy benefits are easy to understand, meanwhile the economic issues are critical, since the final users see them as an additional useless extra cost for the dwelling at the purchase phase, with small attention to the future managing costs. The study demonstrates that significant economic advantages come out from high–performance building envelope. The study also shows that environmental extra loads due to a bigger use of the insulating material is paid back in few years, with consistent social benefits, if the life cycle of the building is taken into account.

The global environmental emergency is worldwide recognised, except for few dissonant voices. Acid precipitation, stratospheric ozone depletion, the greenhouse effect and other effects are menacing the life on the planet. The most important environmental problem related to energy utilisation is global warming, also known as greenhouse effect. CO2 contributes for about 50% to the anthropogenic greenhouse effect [1] and [2]. While the use of energy contributes for about 80% to manmade CO2 emissions, nearly all of the anthropogenic NOx emissions and 30% of the methane emissions are caused by energy use. The rational and efficient use of energy can strongly reduce energy-related emissions. The building sector is still the major responsible for energy end uses, the industry sector having nowadays reached a high level of efficiency and the transport sector still increasing its uses. The buildings sector is responsible for 40% of the energy end uses in Italy and, in particular, 70% can be imputed to the residential only [3]. A strong increase of cooling demand was registered during the few past years; nevertheless the energy bill of Italian dwellings is still dominated by the heating demand. All the studies run at European level and aiming at framing the energy performance of residential buildings and their insulation levels, stressed the poor performances of Italian buildings, especially when normalised to the climatic conditions. This study aims at evaluating the best insulation levels of the opaque components of the building envelope according to the heating season energy performance. By the way, under some specific conditions, which are not considered in this study, the increases of insulation levels can be useful in the hot season as well. The first legislative acts related to the building energy issues date back to the mid 1970s, when the oil crisis outlined the importance of improving and rationalising the energy uses. Since then framework laws, decrees and technical standards have been continuously published but their impact on the way buildings were constructed and retrofitted was absolutely weak. By the mid 1990s Italy had one of the most advanced framework normative, Law 10/1991, with one of lowest application rates. The situation still persists, meanwhile the European Directive 2002/91/CE on the energy performance of buildings fixes a set of conditions that new and existing buildings will have to comply with. The reasons depend on both the lack of implementing decrees needed to make the law effective and the practically complete lack of control procedures, needed to check that the construction process was coherent with data declared during the design phase, especially for the insulation levels. Another not negligible reason was the choice of complex performance indicators, instead of simple indicators that could be easily understood by users. Many studies were carried on during the last decades showing how the energy performance of buildings can improve with a properly insulated building envelope [4] and [5]. The heating loads of buildings depend on the thermal transmittance of envelope components, in principle the lower the latter, the lower the former. This dependence is not linear but has an asymptotic value, that means, in practice, that insulating a wall/roof over a certain thickness is not effective. Such thickness depends on the climatic conditions of the site, the building geometry, the material characteristics and so on. Insulating costs. This is one of the most typical answers heard whenever the energy performances of buildings are debated. It is obviously true that a well-insulated building as a higher initial delta cost if compared with a poorly insulated one. How this delta costs affect the financial performances of the building during its life cycle is seldom taken into account. One important issue of this paper is the economic analysis and evaluation of the envelope components based on the optimisation of the insulating materials thickness. Better insulation levels imply, not only higher initial costs, but higher environmental loads as well, due to the production of the insulating materials. A further analysis, presented in this paper, aimed at verifying if the environmental performances of buildings were compatible with the energy and economic performances previously evaluated. Defining the optimisation of the insulation levels of the opaque components of the building envelope requires the three-level analysis: energy, economy, environment. This integrated approach allows solving the problem without penalising the actors of the construction process: owners, building construction companies, building end users and the whole community. On the contrary, the objective is to provide them with added value.

As far as climatic conditions are concerned, Italy is a complex country including mild Mediterranean regions and cold alpine and sub-alpine areas. Construction technologies and materials, as well as insulation levels are strongly linked to those conditions. This study aimed at defining the best insulation level of the new residential buildings envelope, considering: the economic, energy and environmental issues. In particular, the economic optimisation of the building opaque components was demonstrated. It comes out that the present legislative instruments and the current technical solutions are targeted to very poor standards, aimed at minimising the initial costs that do not even penalise manufacturers of poor quality materials. The practical result is the high heating energy end uses of one of the most temperate countries in Europe. This study shows how better insulated buildings can strongly reduce the energy demand of heating energy. The identification of the best insulation level shows that at our latitudes it is not necessary to have too many centimetres of insulation materials and that all the extra material has a short financial and economic payback time. Also the economic advantages, determined through the net present values, show that consistent savings can be obtained throughout the life cycle of the building. The next step is the analysis of the overall energy performance, including the cooling season, where other aspects will be taken into account beside insulation, as the thermal inertia of the building and the solar gains through the opaque components of the envelope.