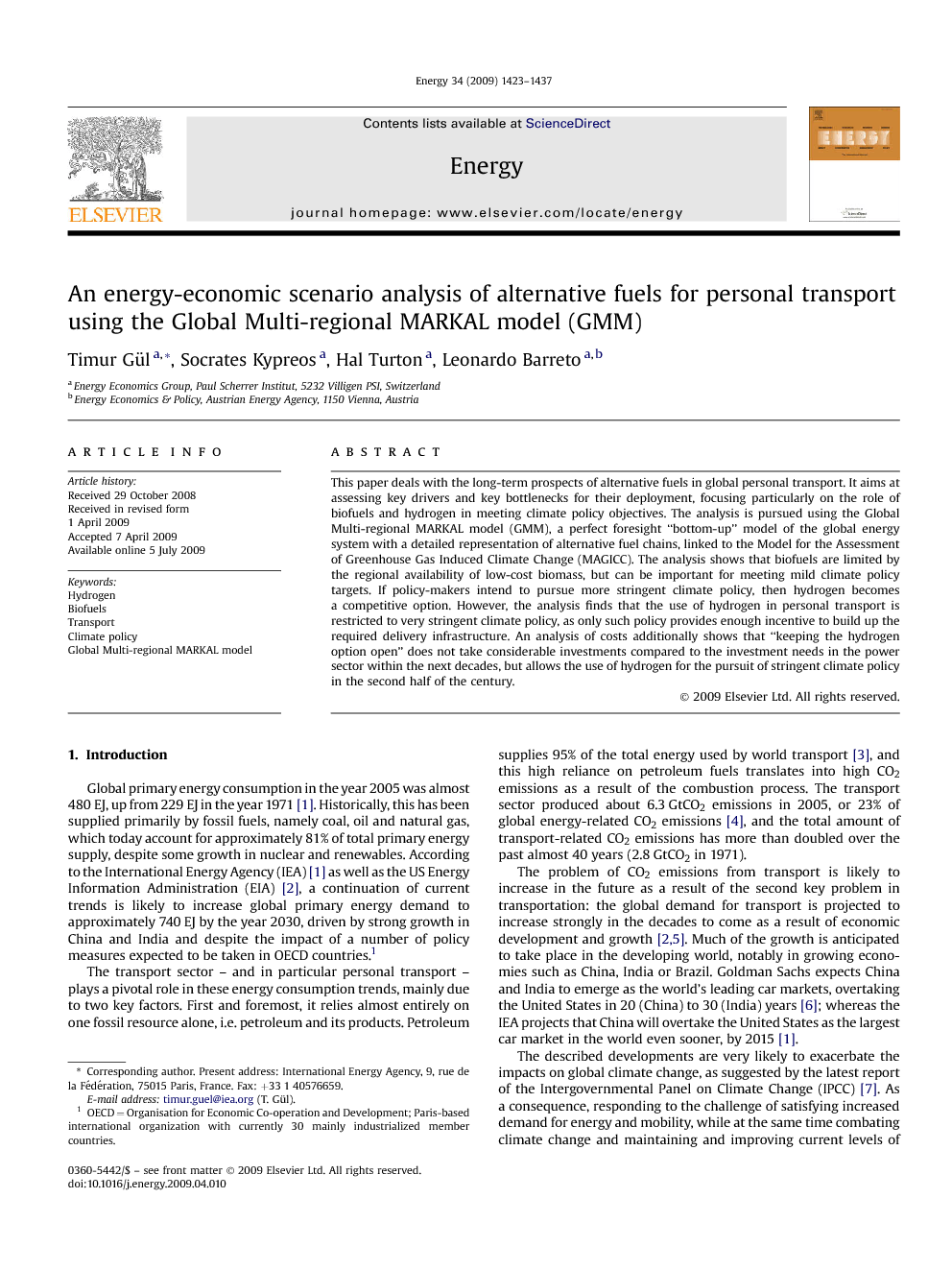 This paper deals with the long-term prospects of alternative fuels in global personal transport. It aims at assessing key drivers and key bottlenecks for their deployment, focusing particularly on the role of biofuels and hydrogen in meeting climate policy objectives. The analysis is pursued using the Global Multi-regional MARKAL model (GMM), a perfect foresight “bottom-up” model of the global energy system with a detailed representation of alternative fuel chains, linked to the Model for the Assessment of Greenhouse Gas Induced Climate Change (MAGICC). The analysis shows that biofuels are limited by the regional availability of low-cost biomass, but can be important for meeting mild climate policy targets. If policy-makers intend to pursue more stringent climate policy, then hydrogen becomes a competitive option. However, the analysis finds that the use of hydrogen in personal transport is restricted to very stringent climate policy, as only such policy provides enough incentive to build up the required delivery infrastructure. An analysis of costs additionally shows that “keeping the hydrogen option open” does not take considerable investments compared to the investment needs in the power sector within the next decades, but allows the use of hydrogen for the pursuit of stringent climate policy in the second half of the century.

Global primary energy consumption in the year 2005 was almost 480 EJ, up from 229 EJ in the year 1971 [1]. Historically, this has been supplied primarily by fossil fuels, namely coal, oil and natural gas, which today account for approximately 81% of total primary energy supply, despite some growth in nuclear and renewables. According to the International Energy Agency (IEA) [1] as well as the US Energy Information Administration (EIA) [2], a continuation of current trends is likely to increase global primary energy demand to approximately 740 EJ by the year 2030, driven by strong growth in China and India and despite the impact of a number of policy measures expected to be taken in OECD countries.1 The transport sector – and in particular personal transport – plays a pivotal role in these energy consumption trends, mainly due to two key factors. First and foremost, it relies almost entirely on one fossil resource alone, i.e. petroleum and its products. Petroleum supplies 95% of the total energy used by world transport [3], and this high reliance on petroleum fuels translates into high CO2 emissions as a result of the combustion process. The transport sector produced about 6.3 GtCO2 emissions in 2005, or 23% of global energy-related CO2 emissions [4], and the total amount of transport-related CO2 emissions has more than doubled over the past almost 40 years (2.8 GtCO2 in 1971). The problem of CO2 emissions from transport is likely to increase in the future as a result of the second key problem in transportation: the global demand for transport is projected to increase strongly in the decades to come as a result of economic development and growth [2] and [5]. Much of the growth is anticipated to take place in the developing world, notably in growing economies such as China, India or Brazil. Goldman Sachs expects China and India to emerge as the world's leading car markets, overtaking the United States in 20 (China) to 30 (India) years [6]; whereas the IEA projects that China will overtake the United States as the largest car market in the world even sooner, by 2015 [1]. The described developments are very likely to exacerbate the impacts on global climate change, as suggested by the latest report of the Intergovernmental Panel on Climate Change (IPCC) [7]. As a consequence, responding to the challenge of satisfying increased demand for energy and mobility, while at the same time combating climate change and maintaining and improving current levels of energy security, is high on the agenda of policy-makers. As a means for tackling this challenge, alternative fuels such as hydrogen and biofuels have been advocated as potential substitutes for petroleum fuels in personal transport, but there is still a considerable need for an understanding of drivers and bottlenecks for their deployment. This paper aims at contributing to this understanding by looking into two key questions: - What is the impact of pursuing different climate policy targets on the prospects of alternative fuels for reducing global CO2 emissions from personal transport? - What are key drivers and key bottlenecks for the deployment of alternative fuels, in particular for hydrogen? The analysis is pursued using the Global Multi-regional MARKAL model (GMM), which depicts the global energy system as a whole recognising that although transport will need to play a pivotal role, energy system efforts will be needed to fully address climate change mitigation. GMM and its model features are introduced in Section 2. Section 3 presents the baseline scenario, which provides important insights regarding the extent of the challenge, and a frame of reference against which the impacts of climate policy can be assessed. In Section 4, the implications of pursuing different climate policy targets on the role of alternative fuels in personal transport are analysed. The analysis is complemented by a discussion of the sources of hydrogen production for selected scenarios, where hydrogen market penetration takes place, as well as an analysis of hydrogen delivery infrastructure as a potential bottleneck for hydrogen market penetration. Finally, Section 5 derives conclusions and policy implications.