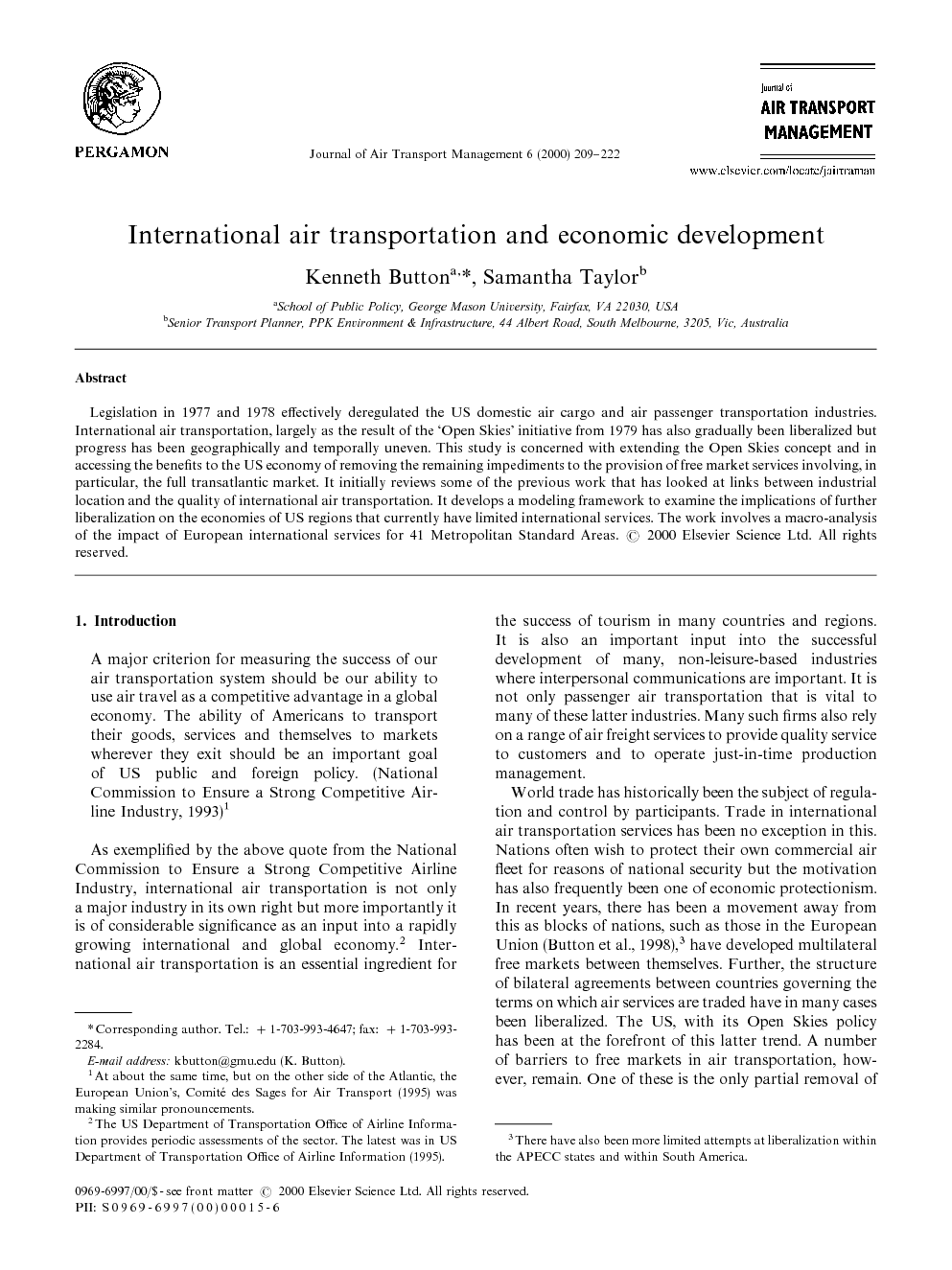 Legislation in 1977 and 1978 effectively deregulated the US domestic air cargo and air passenger transportation industries. International air transportation, largely as the result of the `Open Skies’ initiative from 1979 has also gradually been liberalized but progress has been geographically and temporally uneven. This study is concerned with extending the Open Skies concept and in accessing the benefits to the US economy of removing the remaining impediments to the provision of free market services involving, in particular, the full transatlantic market. It initially reviews some of the previous work that has looked at links between industrial location and the quality of international air transportation. It develops a modeling framework to examine the implications of further liberalization on the economies of US regions that currently have limited international services. The work involves a macro-analysis of the impact of European international services for 41 Metropolitan Standard Areas.

A major criterion for measuring the success of our air transportation system should be our ability to use air travel as a competitive advantage in a global economy. The ability of Americans to transport their goods, services and themselves to markets wherever they exit should be an important goal of US public and foreign policy. (National Commission to Ensure a Strong Competitive Airline Industry, 1993)1 As exemplified by the above quote from the National Commission to Ensure a Strong Competitive Airline Industry, international air transportation is not only a major industry in its own right but more importantly it is of considerable significance as an input into a rapidly growing international and global economy.2 International air transportation is an essential ingredient for the success of tourism in many countries and regions. It is also an important input into the successful development of many, non-leisure-based industries where interpersonal communications are important. It is not only passenger air transportation that is vital to many of these latter industries. Many such firms also rely on a range of air freight services to provide quality service to customers and to operate just-in-time production management. World trade has historically been the subject of regulation and control by participants. Trade in international air transportation services has been no exception in this. Nations often wish to protect their own commercial air fleet for reasons of national security but the motivation has also frequently been one of economic protectionism. In recent years, there has been a movement away from this as blocks of nations, such as those in the European Union (Button et al., 1998),3 have developed multilateral free markets between themselves. Further, the structure of bilateral agreements between countries governing the terms on which air services are traded have in many cases been liberalized. The US, with its Open Skies policy has been at the forefront of this latter trend. A number of barriers to free markets in air transportation, however, remain. One of these is the only partial removal of institutional constraints to free trade in international air transportation. The US's Open Skies policy of the post-1979 era has, for example, led to considerably more openness in many international markets but controls still remain over significant parts of the global network. This was recognized by the National Commission when it pointed to the existing bilateral system of air service agreements as being, “…no longer sound or sufficiently growth-orientated in the global trade environment”. The issue extends beyond this, and simply negotiating more Open Skies agreements, although desirable in themselves, provide only part of the solution. For air transportation to be truly global and for the skies to be cleared of market impediments issues such as allowing full cabotage, the expansion of foreign ownership rights, and less restricted access to may airports still need to be addressed in many countries. The aim of this paper is to examine some of the benefits that US air transport enjoys from having liberal international air transportation and, hence, the potential gains from further liberalization. It focuses on the economic benefits (largely in terms of employment generation) that communities can enjoy from having direct access to international air services. The airports at the core of the study are medium sized international airport although for comparative purposes it is also necessary to embrace some smaller and larger airports in the analysis. The essential hypothesis examined is that the introduction of international services can benefit the economy of an area, that there are accelerated benefits from having a wider range of international services but that that these benefits of additional services are largely exhausted when the number of international destinations served becomes very large. To make the work tractable, the study primarily concerns itself with North Atlantic services. This is because it is a large and important market and one where significant institutional constraints still remain. It is also an air transportation market that serves an important link between two major trading blocs, the European Union and the North American Free Trade Area. The empirical analysis looks at a range of US airports and makes use of a wide variety of data sources to normalize for factors other than air service availability that affect employment growth in any particular area. It concentrates on employment in industrial categories where there are location choices (e.g. not extractive industries) potentially influenced by the quality of local transportation services. It uses the shorthand term `new economy’ to describe these industries although in reality they embody a much wider range of industries than those considered at the cutting edge of the new economy. The analysis uses employment as the key economic variable of interest because it is a relatively robust and measurable indicator of a region's economic success. International services are defined largely in terms of European destinations served by direct flights but other supplementary indicators will also be used, for example to indicate quality of service and network effects.

At a meeting in Chicago towards the end of 1999, called to celebrate and reassess the 1944 Convention after 55 years, and which the US Department of Transportation referred to as a `beyond open skies ministerial', efforts were made to find common ground to further liberalize international air transportation. The US has been relatively active in seeking to liberalize international air transportation and, indeed, at the 1944 had attempted to have a completely open regime but understandably there was widespread international resistance to this at the time. International air transportation has, however, grown rapidly over the past 20 years. In part this reflects market forces such as rising incomes and the internationalization and globalization of business. It has not, however, grown in a fully free market context but rather often within a heavily constrained regulatory framework. Recent years, in part due to US initiatives, have seen some of these controls relaxed and more flexible regimes instigated. The airlines have themselves also circumvented some of the limitations inherent in bilateral air service agreements through the creation of strategic alliances. The US efforts to reform since 1979, and more recently since 1994, have largely involved measures aimed at exploiting the strength of the US in bilateral markets and of picking off individual foreign markets. The Open Skies policy has been successful to a large degree in its strategy. Impediments still remain, most notably in markets such as those involving the UK but also in major markets in Asia such as Japan and China. There has been a general reluctance by the US to widen debates and the policy domain to embrace multilateral structures as seen by the relatively limited support given to the role of the World Trade Organization in air transportation matters. There may be justifiable fears in handing control in such areas as competition policy over the world's largest air transportation service supplier to an external, international agency. The US has found in the past other international agencies, such as ICAO, less than effective in meeting its needs. Nevertheless, there would seem to be significant benefits to the US in pushing forward for further liberalization measures even outside of this institutional structure. The empirical evidence offered in this study shows that, in an examination of a relatively large number of US airports, there are links between the economic structures of surrounding areas and the availability of international air services to the EU market. In particular, those areas enjoying such services have attracted, retained or internally generated relatively more new economy employment (broadly defined) than those without such services. It is both the number of international destinations that are served and the quality of that service that emerges as important. As one may expect, the benefits are not infinite. As more services are added so the additional gains a region around an airport tend to decline. The overall conclusion is that, within limits, more international air transportation is likely to stimulate further growth in the new economy.