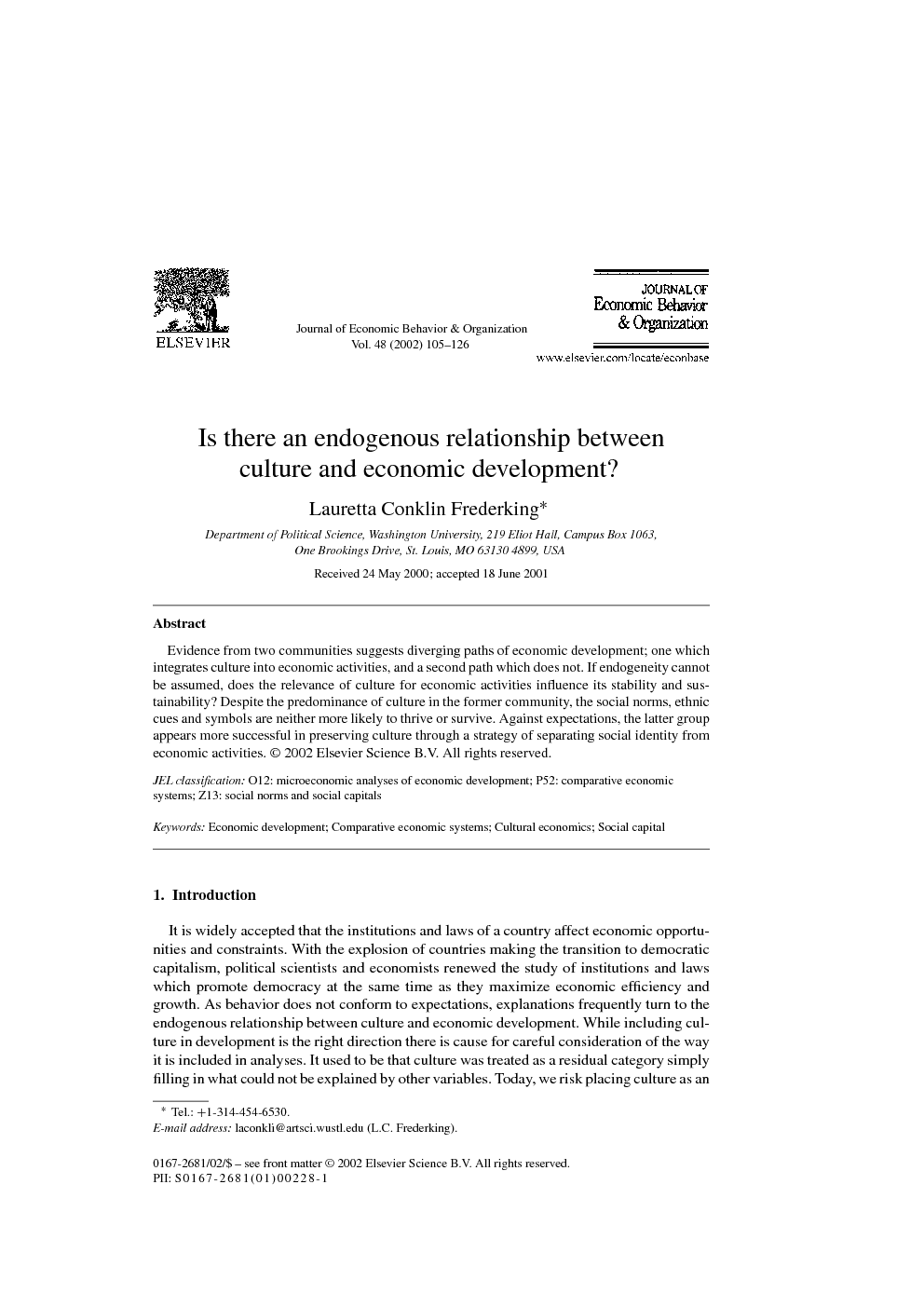 Evidence from two communities suggests diverging paths of economic development; one which integrates culture into economic activities, and a second path which does not. If endogeneity cannot be assumed, does the relevance of culture for economic activities influence its stability and sustainability? Despite the predominance of culture in the former community, the social norms, ethnic cues and symbols are neither more likely to thrive or survive. Against expectations, the latter group appears more successful in preserving culture through a strategy of separating social identity from economic activities.

This paper began with the theoretical debate concerning whether or not there is an endogenous relationship between culture and economic development. My research suggests that the debate must shift towards studying variation in the endogenous relationship rather than assuming the presence or absence of the connection. In 1999, the edited volume of Culture Matters concluded theoretically that variation in cultural values and behavior corresponded with different levels of progress. The empirical solution for undeveloped countries, therefore, is the promotion of “progressive cultural change”. However, by examining groups in different contexts my study demonstrates that an important component of the relationship between culture and development is the various mechanisms which define the relationship between culture and economic activities. In contrast with the conclusions in Culture Matters, it is these mechanisms, rather than the characteristics of a particular culture, which affect the endogeneity of culture and economic development. The Punjabi case presents geographic separation as one mechanism preserving the integration of culture and economic activities. On the other hand, the Gujaratis’ institutionalization of culture, is another mechanism with the effect of limiting the role of culture in development. In Wembley, culture is of limited relevance, and it served as a temporary foundation to cultivate business in the short run and as a springboard for expansion into other areas. Owners start up businesses within the ethnic community, but then once capital is established, they expand opportunities by investing elsewhere and developing a broader consumer base. In the early stages, Wembley entrepreneurs earn necessary capital by appealing to a market that captures Gujaratis, but is not limited to their consumption products or patterns. In contrast, Southall businesses have captured Punjabi consumption but they have been unable to develop appeal beyond the immediate neighborhood, or localized cultural population. There are strong signs of economic stagnation. Not only are the stores themselves in desperate need of renovation, but there is so much turnover that it is difficult to establish long terms growth. As cited in earlier examples, within a span of 1 or 2 years, an owner of a ready-made clothing store becomes an owner of a cloth retail store or kitchenware store and then he or she may become a property rental manager. Punjabis have cultivated their cultural attachments and in the early stages it seems that these bonds facilitate early investment and business relationships. In the long run, however, these attachments prevent the necessary accumulation of profit for reinvestment, expansion of products to attract non-Indian customers, adjustment of practices to accommodate non-Indians similarly, and the legalization of business deals to establish objective standards and expectations. Furthermore, there is indication that the geographic separation of Southall is not stable in terms of individual’s preferences, and cultural identification appears unsustained by those outside of regular interaction in the neighborhood. Beyond long run economic development, it appears as though the Gujaratis’ institutionalization of culture severely and formally defines the individual experience of culture but nevertheless, allows for its sustainability in a non-Indian environment. While the evidence supports the importance of studying culture in order to understand development, it is not thereby concluded that culture is relevant during the process of development. Contrary to the current theoretical resurrection of culture, it is not culture’s characteristics which determine impact, but rather the way in which culture is organized. As it happens, this perspective offers optimism theoretically and practically. Theoretically, there is a much greater possibility of generalization when the mechanisms of organization are the focus of explanations rather than the specific cultural values. And practically, evidence from this study suggests that the politically charged and empirically suspect activity of measuring and comparing development potential behind different cultural values is irrelevant. Regardless of content, cultures can persist without negative consequences for development. In this way, economic progress is possible and can be reconciled with cultural diversity. Few would argue with the social merit of this empirically grounded conclusion.