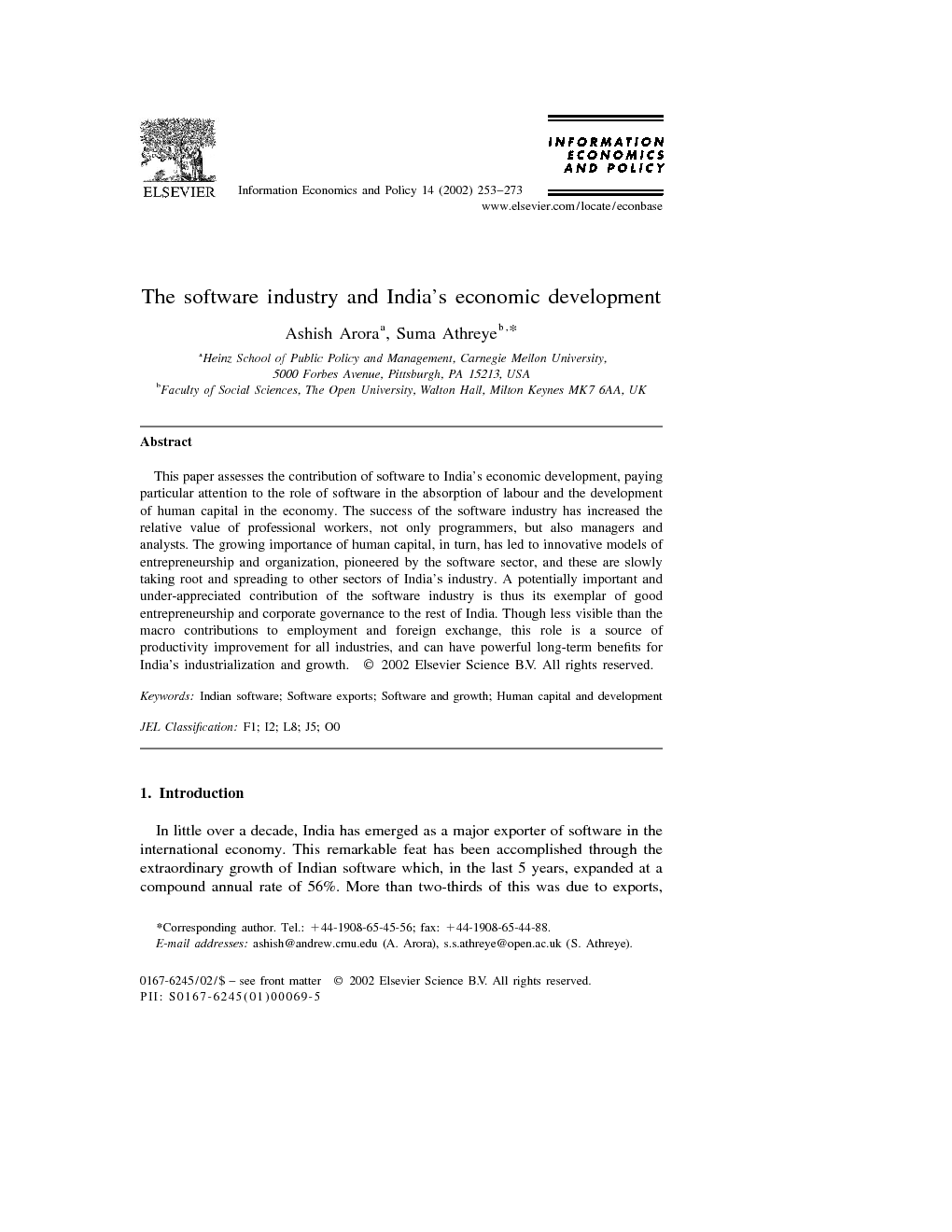 This paper assesses the contribution of software to India’s economic development, paying particular attention to the role of software in the absorption of labour and the development of human capital in the economy. The success of the software industry has increased the relative value of professional workers, not only programmers, but also managers and analysts. The growing importance of human capital, in turn, has led to innovative models of entrepreneurship and organization, pioneered by the software sector, and these are slowly taking root and spreading to other sectors of India’s industry. A potentially important and under-appreciated contribution of the software industry is thus its exemplar of good entrepreneurship and corporate governance to the rest of India. Though less visible than the macro contributions to employment and foreign exchange, this role is a source of productivity improvement for all industries, and can have powerful long-term benefits for India’s industrialization and growth.

In little over a decade, India has emerged as a major exporter of software in the international economy. This remarkable feat has been accomplished through the extraordinary growth of Indian software which, in the last 5 years, expanded at a compound annual rate of 56%. More than two-thirds of this was due to exports, making the industry a major export earner for the country. The proportion of software exports to merchandise exports grew from a negligible amount in 1990 to over 6% in 1998–1999. Remarkably, these software exports are largely due to the efforts of domestic rather than foreign firms. Of the top 20 exporters in 1998–1999, only six firms were foreign subsidiaries. The software industry contributes 1% of India’s GNP, but has accounted for over 7% of the growth of its GNP (Kumar, 2000a and Kumar, 2000b). In 1997, the software industry employed 160,000 of the total employed workforce of 28.245 million. Employment in the industry, although constituting only a small fraction of the total, has grown quickly and estimates for the year 2000 suggest that there will be over 410,000 IT professionals employed in India. Can the software sector continue to contribute significantly to economic growth, and what forms are these contributions likely to take? To answer this question, we begin by examining in Section 2 the factors that have contributed to India’s emerging specialization in software exports. We argue that software services are intensive in human capital and the abundant supply of engineers in the country provides not only an absolute wage advantage, but also a comparative advantage. In Section 3 we review the factors that constrain the current growth of the software industry on the supply side, in particular the role of underinvestment in literacy and in telecommunications infrastructure. Section 4 analyses the contribution of software growth to human capital formation. High earnings in software have resulted in considerable private investment in training, and the subsequent emergence of a successful self-financing model of tertiary education in some parts of the country. Section 5 analyses the impact of software on productivity improvements through the linkage effects of software in the domestic economy. We conclude that this mechanism of productivity improvement is of limited importance in the Indian context. Section 5 emphasizes the role of high software salaries versus the rest of India’s industry in creating productivity-inducing organizational improvements in software. We also analyse the role of software firms as organizational exemplars. Section 6 summarizes our main conclusions.

In this paper, we have argued that the rapid advance of software exports from India is a consequence of the country’s comparative advantage in the production of these services rather than the result of an absolute advantage in terms of wage differentials alone. This comparative advantage, in turn, is based on the availability of a large English-speaking and technically qualified workforce as well as the relative disadvantage in manufacturing due to poor infrastructure investments in the past. Indeed, the larger the size of this disadvantage, the greater the benefit of specializing in software. The transfer of resources from poor productivity sectors to those with greater productivity will also spur the growth process. The last decade has seen higher rates of income growth in the south and west of the country, the areas of software concentration. These factors favouring India’s software exports are further reinforced by the low domestic demand for similar types of products and services. Though there are gains from specialization, the distribution of gains from such specialization, however, remains uneven due to the structure of the Indian software industry that still remains largely undifferentiated. The latter is, however, a circumstance that will change as the industry matures. Due to the undifferentiated and service nature of Indian software firms, however, human capital has grown in importance to levels that were hitherto reserved for the scarcer financial and physical capital in Indian industry. In an extremely competitive international software market, Indian firms emphasize the quality of their procedures and human resources to gain a competitive advantage. This microeconomic response has had both positive and negative consequences. One benefit stems from the appreciation of training in an environment where qualified software programmers are scarce and are becoming scarcer. This, in turn, has resulted in substantial private investment in the provision and acquisition of tertiary training. The adverse consequence is the slow hiking-up of prices for the most technically-qualified workers, viz. engineers. Engineers had for years supplemented their engineering degrees with other qualifications in order to be accommodated in the better paying management cadre. Currently they are in the enviable position of being able to command large salaries for tasks for which their training is rather irrelevant. The government has responded to this crisis in engineering education by targeting resources to the engineering colleges and institutes for information technology—the same areas favoured by private investment. Our analysis suggests that the economy as a whole can realize greater benefits by complementing private investments with public investments in basic and secondary education and in physical infrastructure, factors that had constrained the growth of the software industry in the first place. The current excess demand for engineers will, in time, be corrected by a more rational and economical strategy, viz. training science graduates in software programming. The hiking-up of wages for Indian engineers and technically trained labour, and the increased demand for them in the international market have also forced Indian software firms to adopt organizational practices comparable to those of their strongest competitors in the US and elsewhere. This has included the charting of career paths for technical personnel and systems of rewards that share both profits and risks. Increasingly, firms are being forced to provide more congenial and satisfying work environments. We have argued that some of these measures are spilling over into other service sectors, where human capital is more important than physical capital and from where the software sector may draw employees to man middle-level management positions. In turn, this has forced various companies, which have controlled large parts of the economy, to adopt more professional and transparent practices. These changes are likely to be slow, but there are other institutional forces at work, most notably the increasing importance of equity markets, and increased competition from imports and from multinationals. However, greater specialization in software production and exports in the domestic economy (with or without differentiation of the industry) are constrained by precisely the same factors that accounted for India’s relative disadvantage in manufacturing, namely poor and inadequate investment in physical infrastructure, communications and basic education. Thus, while software development offered a window of opportunity because of the large supply of underemployed engineers, it is a narrow window. Furthermore, software has not become the leading sector in India’s economic growth, at least partly because of its poor linkages with the rest of the economy. This poor linkage is itself a consequence of the ‘service’ rather than ‘product’ nature of the industry, and its external rather than inward orientation, facts lamented by previous analyses of the industry. In this paper we have tried to show it is precisely these two facts—the (technical) labour-intensive nature of the industry and an environment of global excess demand for such labour-which have altered the attitudes towards human capital formation at the firm level and in the national economy. In the final analysis, it is in terms of this slow change in attitude towards education, entrepreneurship, and the value of human capital in the economy where the software industry has made its greatest contribution to India’s economic development.