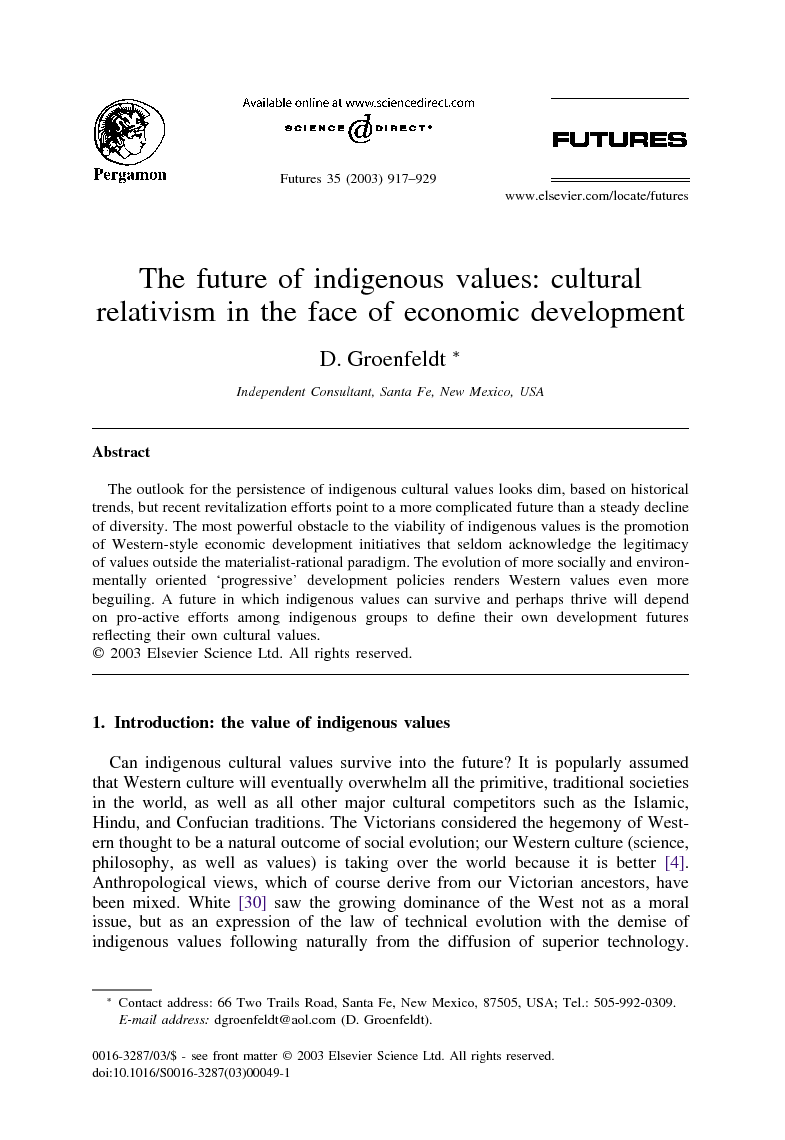 The outlook for the persistence of indigenous cultural values looks dim, based on historical trends, but recent revitalization efforts point to a more complicated future than a steady decline of diversity. The most powerful obstacle to the viability of indigenous values is the promotion of Western-style economic development initiatives that seldom acknowledge the legitimacy of values outside the materialist-rational paradigm. The evolution of more socially and environmentally oriented ‘progressive’ development policies renders Western values even more beguiling. A future in which indigenous values can survive and perhaps thrive will depend on pro-active efforts among indigenous groups to define their own development futures reflecting their own cultural values.

Can indigenous cultural values survive into the future? It is popularly assumed that Western culture will eventually overwhelm all the primitive, traditional societies in the world, as well as all other major cultural competitors such as the Islamic, Hindu, and Confucian traditions. The Victorians considered the hegemony of Western thought to be a natural outcome of social evolution; our Western culture (science, philosophy, as well as values) is taking over the world because it is better [4]. Anthropological views, which of course derive from our Victorian ancestors, have been mixed. White [30] saw the growing dominance of the West not as a moral issue, but as an expression of the law of technical evolution with the demise of indigenous values following naturally from the diffusion of superior technology. Mead [17] saw this trend as unfortunate (because of the loss of cultural diversity) but also inevitable, with the anthropological responsibility one of smoothing the transition for the formerly isolated indigenous societies (her point of reference being Pacific Island societies). Many contemporary commentators, including a few anthropologists [9] overtly welcome the demise of traditional value systems which prevent individuals from living the full and fulfilling lives that, in their view, only our Western ethos makes possible. My focus in this paper is less to forecast the future of indigenous values, than to suggest what responses we might take to influence that future—to create a world that has room for other ways of seeing, thinking, and ‘valuing’. Some anthropologists seek to salvage the knowledge and customs of primitive societies before they disappear, through a process of urgent ethnography, much as some biologists are urgently collecting the germ plasm of endangered plant species. This approach would preserve information about indigenous values, but not the values themselves. Values are expressed by individuals living within a social group having a shared culture (see subsequently for more on values) and depend on a cultural ‘habitat’—a social group—for their preservation. The preservation of values depends on the preservation of cultural identity within which indigenous values can be maintained. But why should we be concerned with maintaining cultural values that may even be at odds with our own (mostly Western) concepts? The answer to this depends on how seriously we believe in the desirability of multiculturalism. If we truly believe that our own Western cultural system is the only legitimate way of making sense of the world, then we have no reason to protect competing value systems; however, if we acknowledge an inherent validity in other ways of knowing (as anthropologists used to do under the banner of cultural relativity) then we have both a reason and an obligation to support the health and continuation of other value systems. At first glance, the long-term outlook for native cultures is not promising. Current trends appear to preclude the viability of truly different cultural systems persisting in the face of our globalizing and increasingly economically oriented world. Historical trends are perhaps even more daunting. What has happened to the cultural diversity of, say, the 19th century, much less the 15th century? But straight-line projections are often misleading, and in considering the possibilities of a culturally diverse future, I believe such projections are likely to be wrong. The trend of economic and informatic globalization, for example, is unleashing a new interest in cultural distinctiveness and opening new opportunities for marginalized indigenous groups to establish direct marketing as well as political connections with the distant outside world. By jumping beyond the ‘near’ outside world of the locally dominant and culturally prejudiced mainstream society, indigenous groups are finding new sources of political, economic, and cultural support. Indigenous cultures are experiencing two beneficial trends necessary, though not in themselves sufficient, for the survival of their values: (1) indigenous self-identity is, with many exceptions, being revitalized and empowered from within, and (2) the concept of cultural diversity is gaining new acceptance from mainstream societies. But even as the long-term future of indigenous identity appears more secure, the survival of the core cultural values underlying that identity is more problematic. Will some essence of the cultural core, the stuff that underlies truly distinctive ways of making sense of the world, survive into the future? Or will the future bring only a superficial cultural diversity of language and dress and ceremonies whose meaning has been diluted into purely performance art?

The cases of indigenous cultural success in safeguarding distinctive core values against the rising tide of Westernization are exceptional—perhaps proving the ‘rule’ that, if current trends continue, indigenous values will not survive very far into the future. Ceteris paribus, the worldviews of native peoples will continue to be overwhelmed under the force of Western science and the peculiar cultural arrogance that has been our inheritance. Indeed, the relationship between the addictive materialism of Western society and the role of indigenous groups as victims, fits the classic psychological model of co-dependence. It has become a self-fulfilling expectation by indigenous groups that their own interests will have to yield to the culturally abusive power of the Western juggernaut, and each hegemonic success by the West reinforces the status quo. Is there a cultural ‘12-step’ program that can help indigenous societies recapture their cultural lives? A critical common element in the three examples cited above is a strong self-awareness of cultural distinctiveness and a shared sense that the indigenous community wants to maintain a distinctive way of life. Cultural identity, like charity, begins at home. In the words of Battiste [3]: “…Aboriginal consciousness cannot be maintained without first challenging the assumptions of modern society”. How does this happen? In Bhutan as with the Menominee, the political leaders are seeking to define a culturally grounded development path. Among the Maori, while the current leadership is promoting Maori cultural independence, an important stimulus was the visioning process begun some 25 years ago. A sense of cultural identity can be taught, and cultural goals (vision) can be created through a deliberate process, as the Maori case illustrates. It is this type of approach that offers hope, and perhaps the only hope, for the survival of indigenous cultural values. Recent work on visioning exercises in rural settings, both indigenous and otherwise [27] and [28], points to the potential for systematically outlining cultural goals as an initial and critical step in reclaiming a cultural identity, and in charting a culturally grounded development path. Visioning can stimulate an awareness of cultural values that the society wishes to maintain, and provides a forum for garnering internal consensus on cultural goals. This first step of awareness raising about cultural values may well be the hinge on which turns the future of culturally distinct approaches to living. A future with indigenous values would, I believe, enrich both indigenous and mainstream societies. Believing in its desirability does not directly enhance the odds of value survival, but, as with the visioning process, clarifying what is considered desirable is a necessary step to planning effective action. Faced with a scenario of living in a ‘flatland’ of pure materialism [32] let us hope that indigenous societies will place new value on their old values and help all of us escape the fate of our own cultural success.