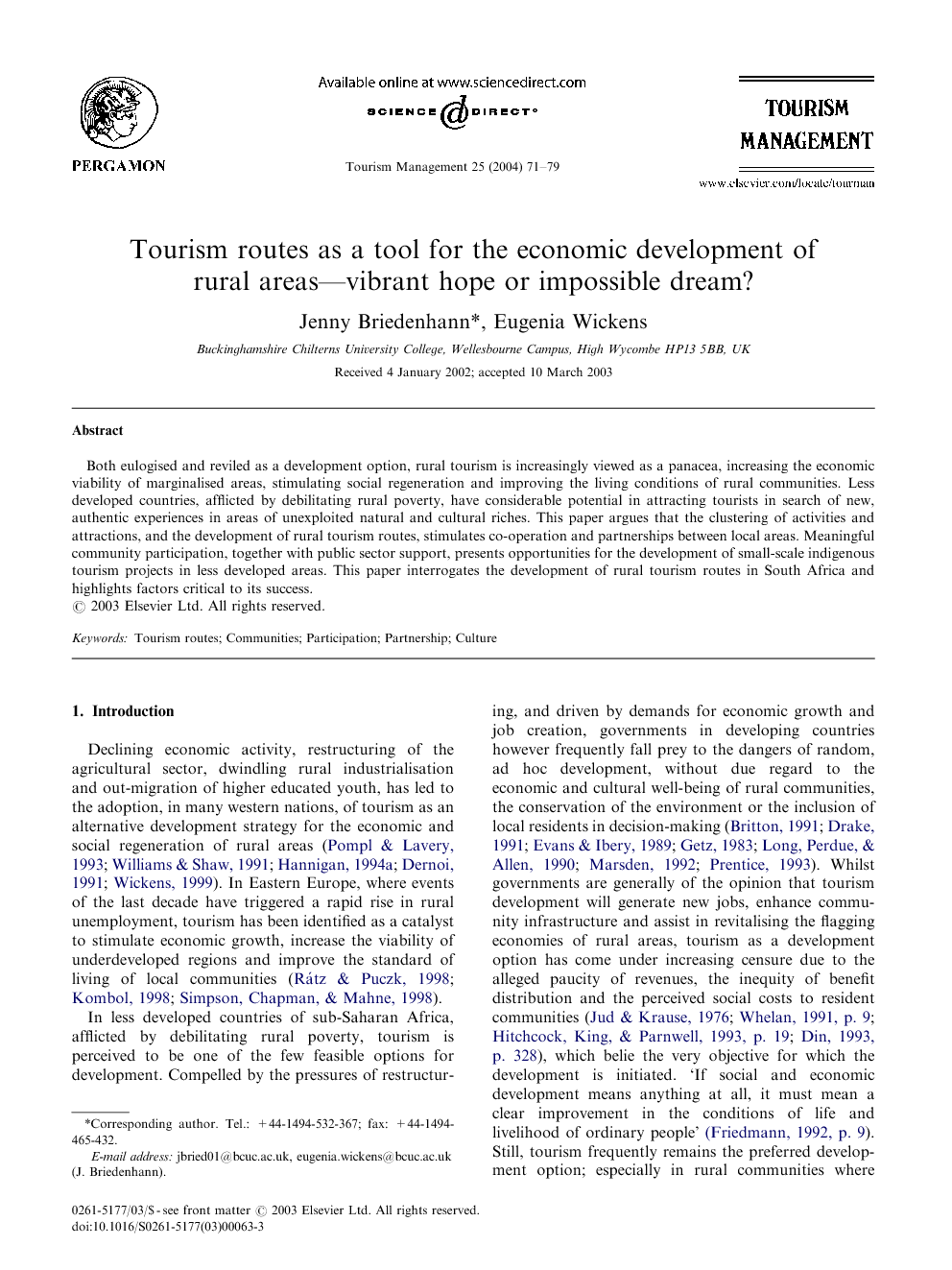 Both eulogised and reviled as a development option, rural tourism is increasingly viewed as a panacea, increasing the economic viability of marginalised areas, stimulating social regeneration and improving the living conditions of rural communities. Less developed countries, afflicted by debilitating rural poverty, have considerable potential in attracting tourists in search of new, authentic experiences in areas of unexploited natural and cultural riches. This paper argues that the clustering of activities and attractions, and the development of rural tourism routes, stimulates co-operation and partnerships between local areas. Meaningful community participation, together with public sector support, presents opportunities for the development of small-scale indigenous tourism projects in less developed areas. This paper interrogates the development of rural tourism routes in South Africa and highlights factors critical to its success.

Declining economic activity, restructuring of the agricultural sector, dwindling rural industrialisation and out-migration of higher educated youth, has led to the adoption, in many western nations, of tourism as an alternative development strategy for the economic and social regeneration of rural areas (Pompl & Lavery, 1993; Williams & Shaw, 1991; Hannigan, 1994a; Dernoi, 1991; Wickens, 1999). In Eastern Europe, where events of the last decade have triggered a rapid rise in rural unemployment, tourism has been identified as a catalyst to stimulate economic growth, increase the viability of underdeveloped regions and improve the standard of living of local communities (Rátz & Puczk, 1998; Kombol, 1998; Simpson, Chapman, & Mahne, 1998). In less developed countries of sub-Saharan Africa, afflicted by debilitating rural poverty, tourism is perceived to be one of the few feasible options for development. Compelled by the pressures of restructuring, and driven by demands for economic growth and job creation, governments in developing countries however frequently fall prey to the dangers of random, ad hoc development, without due regard to the economic and cultural well-being of rural communities, the conservation of the environment or the inclusion of local residents in decision-making (Britton, 1991; Drake, 1991; Evans & Ibery, 1989; Getz, 1983; Long, Perdue, & Allen, 1990; Marsden, 1992; Prentice, 1993). Whilst governments are generally of the opinion that tourism development will generate new jobs, enhance community infrastructure and assist in revitalising the flagging economies of rural areas, tourism as a development option has come under increasing censure due to the alleged paucity of revenues, the inequity of benefit distribution and the perceived social costs to resident communities (Jud & Krause, 1976; Whelan, 1991, p. 9; Hitchcock, King, & Parnwell, 1993, p. 19; Din, 1993, p. 328), which belie the very objective for which the development is initiated. ‘If social and economic development means anything at all, it must mean a clear improvement in the conditions of life and livelihood of ordinary people’ (Friedmann, 1992, p. 9). Still, tourism frequently remains the preferred development option; especially in rural communities where people are so desperate that they will accept any proposal, which portends to offer economic growth, with little or no consideration of future detrimental impacts (Kinsley, 2000, p. 1). This paper argues that the clustering of activities and attractions, in less developed areas, stimulates co-operation and partnerships between communities in local and neighbouring regions and serves as a vehicle for the stimulation of economic development through tourism. The paper further discusses the development of rural tourism routes in South Africa and highlights the factors critical to its success. A brief commentary on tourism routes in general, is followed by an interrogation of the proposed utilisation of tourism routes as a strategy through which to ‘rapidly optimise the synergies between job creation, tourism and conservation in Africa’ (Open Africa, 2002, p. 4). Throughout the world, developing countries, with a rich resource base of pristine natural and cultural treasures, hold significant comparative advantage in their potential to attract tourists in search of authentic new experiences (Wahab, 1974, p. 15). The potential for tourism development in sub-Saharan Africa is however under threat given that the alleviation of rampant, debilitating rural poverty must perforce take priority over resource conservation thus ‘precipitating a downward spiral in which both communities and their best chance of recovery, is steadily diminishing’ (Open Africa, 2002, p. 13). Redclift (1992, p. 395) echoes this opinion, arguing that ‘poor people often have no choice but to choose immediate economic benefits at the expense of the long term sustainability of their livelihoods. There is no point in appealing, under these circumstances, to idealism or altruism to protect the environment when the individual and household are forced to behave ‘selfishly’ in their struggle to survive’.

The Open Africa project may well seem an impossible dream, but opportunity which can fill South Africa's deprived and neglected communities with a hope to match their own vibrancy, must be supported by all who have the interest of the country at heart. Support by the public sector will however assume ever-increasing significance. The project will be unable to tackle issues of infrastructure upgrading and development, and whilst higher education institutions are increasingly lending their support by means of short courses and mentoring programs, government too must accept its responsibility in this area. Issues of safety and security also fall within the public sector domain and no amount of development will entice tourists to travel to rural areas if they fear for their safety. It has taken a private sector initiative to launch this project. It now calls for genuine co-operation and partnership between the public and private sectors and local communities to sustain it. For the new South Africa, the consequences of failure to develop a sustainable tourism industry, inclusive of opportunity for all her people, do not bear contemplation.