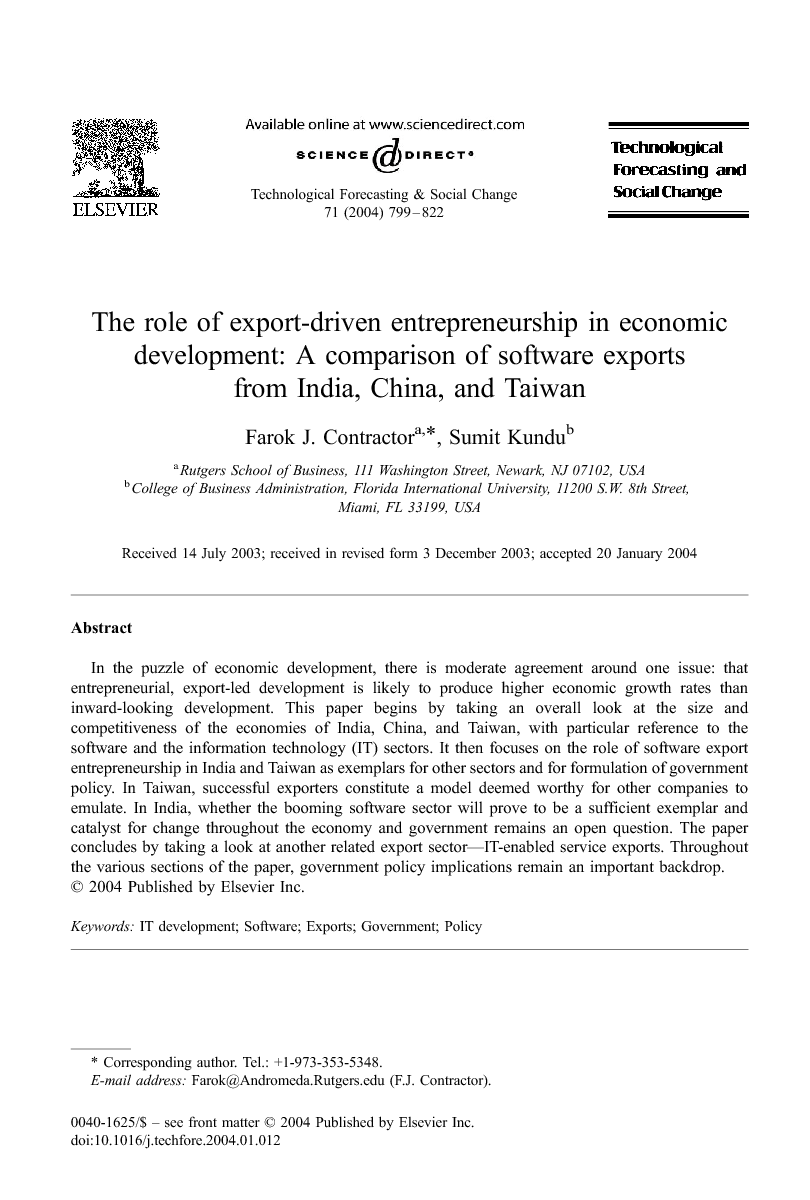 In the puzzle of economic development, there is moderate agreement around one issue: that entrepreneurial, export-led development is likely to produce higher economic growth rates than inward-looking development. This paper begins by taking an overall look at the size and competitiveness of the economies of India, China, and Taiwan, with particular reference to the software and the information technology (IT) sectors. It then focuses on the role of software export entrepreneurship in India and Taiwan as exemplars for other sectors and for formulation of government policy. In Taiwan, successful exporters constitute a model deemed worthy for other companies to emulate. In India, whether the booming software sector will prove to be a sufficient exemplar and catalyst for change throughout the economy and government remains an open question. The paper concludes by taking a look at another related export sector—IT-enabled service exports. Throughout the various sections of the paper, government policy implications remain an important backdrop.

Since the 1960s, various theories, such as the Fisher–Clark, Harrod–Domar, the “Core–Periphery” model, and Rostow's Stages of Economic Development, have been advanced to explain the puzzle of economic development. Sociological studies have also abounded, examining factors, such as literacy, fertility and gender roles (e.g., Dasgupta and Li [1]). None has proven to be more than a partial explanation of why some nations grow faster than others or why growth rates, even for the same nation, vary significantly over time. In the early 1960s, India, China, and Taiwan were not too far apart in industrial structure, indices of human development, or per capita income. However, by 2001, China's GDP per capita at US$913 was almost double of India's US$485, while Taiwan's had reached US$14,395, virtually that of a lower-rung advanced country—something not predicted by any single theory. Most scholars now agree that entrepreneurial, export-led development is likely to produce higher economic growth rates than inward-looking development. Total exports per capita for 2001 ranged from a mere US$43 in India to US$209 in China and US$5830 in Taiwan, which exports more than 100 times per person than India; its GDP per capita is 30 times that of India. Much of China and Taiwan's growth and almost all of its export drive rest on manufactured products. China's manufacturing GDP per capita in 2002, at US$1322, was four times that of India's US$381, and it employs more than twice as many people in manufacturing (95 million vs. 45 million). Recently, however, information technology (IT) and IT-enabled services (alternatively labeled as business process outsourcing [BPO]) have been proposed by Joseph [2] as a bright spot for India's exports. Arora and Athreye [3] go farther and propose software and IT-related exports as a catalytic spark for overall economic development in India. A demonstration effect, impinging on the rest of India, from successful entrepreneurship and rampant growth in software and IT is thought likely to lead to improvements in public policy, education, and infrastructure, as well as galvanize private investment. This paper asks why India lags so far behind China in manufactures and in exports but is able to vastly outshine China in the IT sector. It traces the effect of government policies and entrepreneurship on export success. It begins by taking an overall, broad look at economic indicators, such as exports and foreign direct investment (FDI) in India, China, and Taiwan, and then focuses on the role of the IT and IT-related service sectors. An underlying hypothesis of this paper is that thwarted entrepreneurship is one of the principal causes for India's sluggish performance, compared with other Asian nations. A comparative study of software exporters in India and Taiwan examines entrepreneurial factors leading to export success. In Taiwan's case, export success in general has led to an export-driven economy. Whether the booming software sector in India will prove to be a sufficient exemplar and catalyst for nationwide change remains an open question. The paper concludes by taking a look at another related export sector—IT-enabled service exports. Throughout the various sections of the paper, government policy implications remain an important backdrop.

This paper, while focusing on software and IT-related exports from India, China, and Taiwan, began with a broader comparison of economic indicators in these three nations for the year 2001. While India, China, and Taiwan had started in 1960 at a roughly comparable level of development, by 2001, Taiwan was almost a developed nation, while China's GDP per capita was almost double that of India. India compares unfavorably with China and Taiwan on most indicators. Many of Taiwan's companies are globally competitive in high-technology areas such as semiconductors. China's manufacturing output is more than four times that of India, and it exports more than six times. However, India has a commanding lead in software exports, at over 6 times that of China and 15 times that of Taiwan. How can India perform so well in software exports, while being relatively backward in manufactures and manufactures exports? This paper sought to provide explanations for this seeming anomaly. It identified five necessary and sufficient conditions for success: engineering and technical abilities, infrastructure, economic policies conducive to investment, escaping corruption and bureaucratic impediments, and entrepreneurial values. Whereas manufacturing in India fails to achieve all five of the above criteria, service exports either achieve or circumvent them so as to achieve export success. Infrastructural bottlenecks, such as transportation and power, affect manufacturing but do not affect software exports. Sufficient public investment appears to have been made by the Indian government in data transmission and software parks—investments that foster startups. Perhaps because of early and effective lobbying by the sector, Indian IT policies may be more liberal than those available to manufactures in terms of openness to FDI, incentives, and (until recently) in the ability to procure needed imports. IT and software enjoy much greater freedom, compared with manufactures, in being able to escape the “Inspector Raj” because in services, there are no goods to inspect, impede, tax, or certify. As a result, the software and IT sector has attracted some of India's best entrepreneurs. The paper next reported on the results of a survey of Indian and Taiwanese entrepreneurs in software exports. The results suggest the considerable importance of entrepreneur attributes required for software export success. These include technical education, technological innovativeness, and foreign experience at which Indian software sector entrepreneurs excel. In summary, given a sufficiently nurturing environment that fosters entrepreneurship combined with the absence or circumvention of bureaucracy and corruption, Indian firms can excel and compete globally.