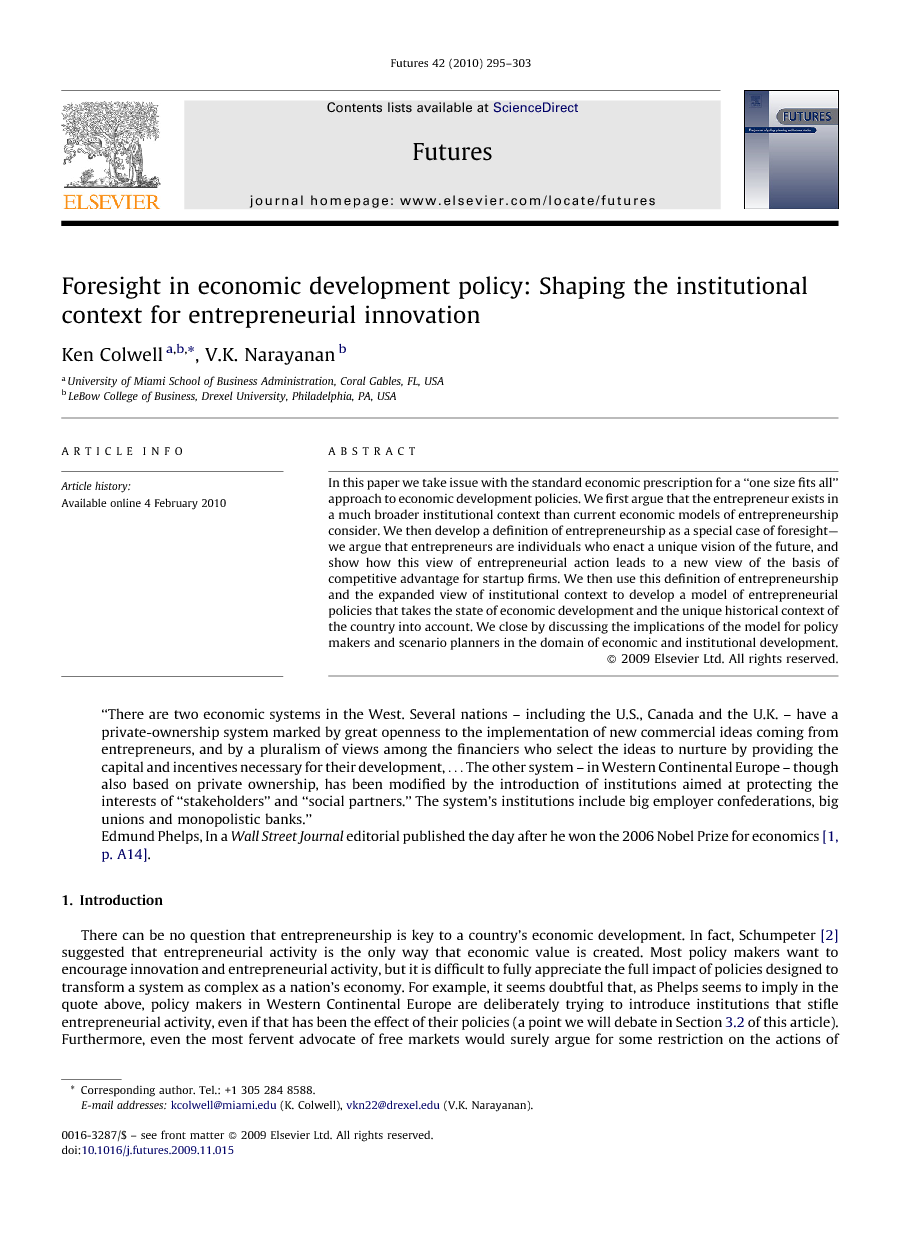 There can be no question that entrepreneurship is key to a country's economic development. In fact, Schumpeter [2] suggested that entrepreneurial activity is the only way that economic value is created. Most policy makers want to encourage innovation and entrepreneurial activity, but it is difficult to fully appreciate the full impact of policies designed to transform a system as complex as a nation's economy. For example, it seems doubtful that, as Phelps seems to imply in the quote above, policy makers in Western Continental Europe are deliberately trying to introduce institutions that stifle entrepreneurial activity, even if that has been the effect of their policies (a point we will debate in Section 3.2 of this article). Furthermore, even the most fervent advocate of free markets would surely argue for some restriction on the actions of enterprising and ambitious entrepreneurs. This delicate balance of simultaneously encouraging and constraining entrepreneurial activity requires a special kind of foresight that takes the entire institutional context in which the entrepreneur operates into account. Although public policy is naturally future-oriented, policy makers do not necessarily take the social context of their policies into account [3]. Furthermore, those engaged in public policy foresight must recognize that desirable future states cannot be predicted with any certainty [4]. The majority of academic work in this area to date has been undertaken by researchers with a macro-economic perspective, such as Phelps in the introductory quote. In this article, we approach economic development policy from a different perspective. Building on earlier works that have highlighted the role of institutions in the applicability of strategy models [5], and the need for scenario planning to embrace the institutional environment [6], we argue that to stimulate entrepreneurship globally requires a strong focus on designing appropriate institutional contexts. By examining the nature of the context in which the entrepreneur operates, we hope to shed some light on the appropriate public policies for encouraging productive entrepreneurial activity in different economic systems. Specifically, we argue that the current state of the country's economic development as well as its unique history and culture have crucial roles in determining the best policies to shape institutional context for future entrepreneurial success. The scheme of the paper is as follows. We first describe what we mean by an institutional context, taking care to distinguish our model of the entrepreneurial context from the narrower economic model that focuses solely on constraining formal institutions. We then develop a definition of entrepreneurship from a cognitive perspective, and show how this view of entrepreneurial action leads to a new view of the basis of competitive advantage for startup firms. The remainder of the paper shows the public policy implications of our model, paying particular attention to a view of entrepreneurial policy based on the country's unique historical context and current state of economic development rather than any overarching political philosophy. We close by suggesting some implications of our model for scenario planners as well as policy makers.